by Timo27. November 2017
YI Technology has launched a new dashcam that, unlike the manufacturer's first "Xiaoyi" dashcam, does not carry the "Xiaomi" addition, but is self-marketed. For this review, YI Technology has provided us with the so-called "YI Ultra Dash Camera". If you want to know how the camera beats for the car, you should read on!
Overview
Manufacturer/Model

From this scope, other manufacturers should cut a slice! YI Technology enters the Ultra Dashcam wide accessory package at. Included are the same as the Dashcam two brackets with ball joint, one of which can be attached by means of a suction cup and the other by means of a glue pad. Furthermore included are one 16GB Toshiba Exceria MicroSD memory card, Car charger (5V - 2.4A) with two USB jacks, one 3.5 meter long micro USB cable, a small tool for laying the cable and a multilingual Manual (also German) and more Note Cards, The package thus includes everything you need to use the Dashcam.

Visually, the new YI Ultra Dascam has nothing in common with its predecessor, the Xiaoyi YI Smart Dashcam. Dimensions amount to the camera 85 x 34.8 x 55 mm. Das Weight is easy 96 g.

The dashcam is set up as follows: front side In the middle is the lens, surrounded by a black plastic case, which is visually highlighted around the lens with a checkerboard pattern. Below the lens is the speaker. 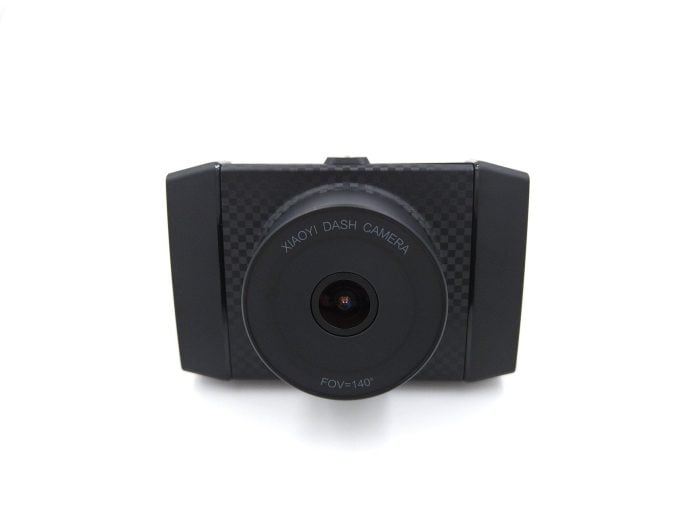 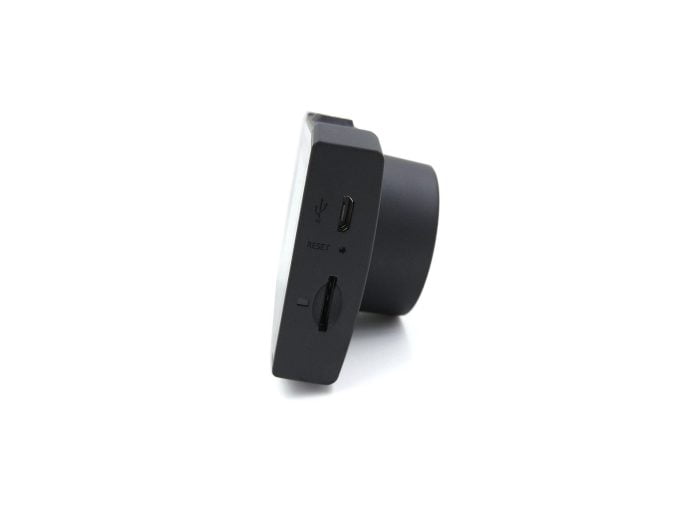 On the right Housing frame side is the MicroSD memory card slot. A reset button and a micro USB socket were placed over it. The frame top forms the ventilation holes with a central thread for mounting the bracket. 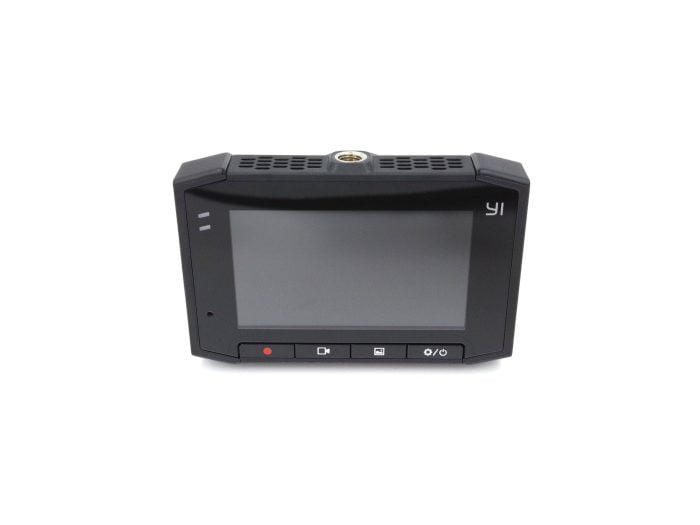 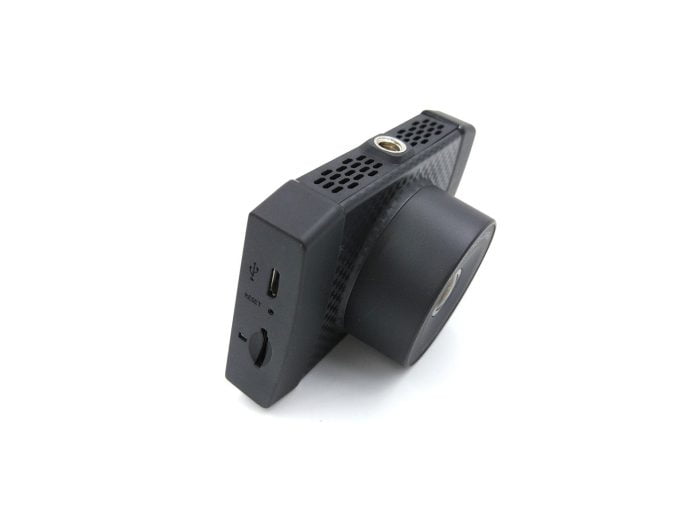 The quality of workmanship of the camera, as well as the supplied accessories is straightforward and corresponds to the price.

Compared to the first Xiaoyi Dashcam, also known as YI Smart Dashcam, the YI Ultra successor is just a minor upgrade. Functionally, both cameras donate nothing. There are only differences regarding the internal hardware equipment. Enclosed a comparison of the individual features. 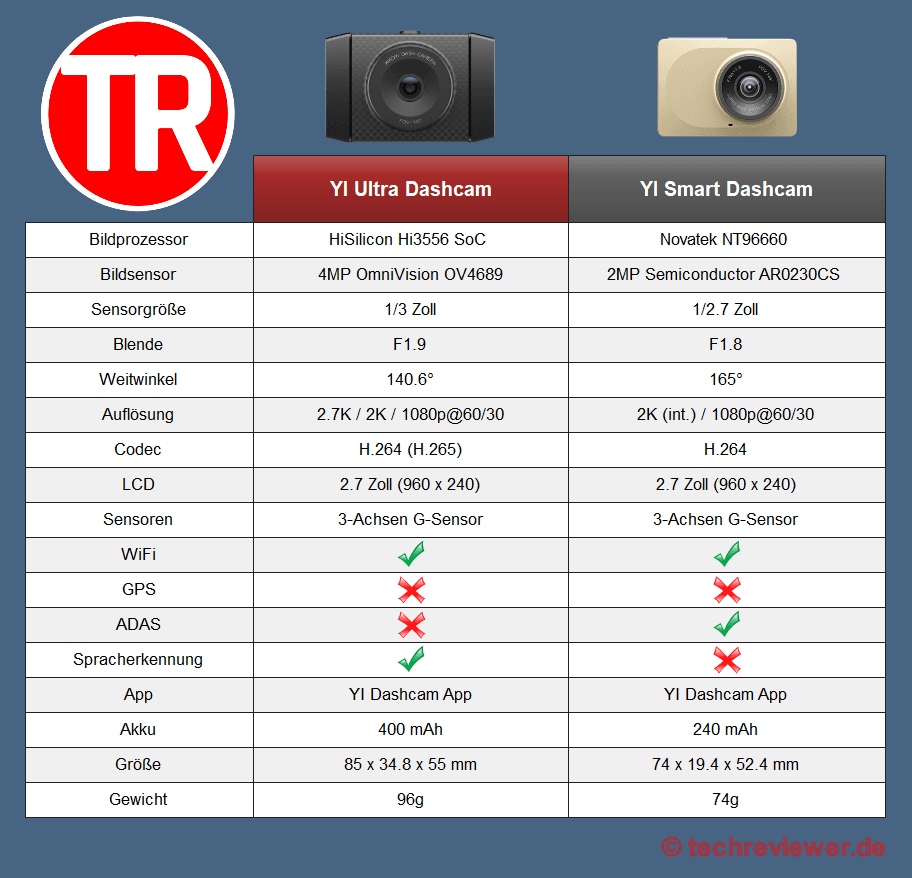 To the YI Smart Dashcam Test

YI Technology is silent on the exact name of the image processor and image sensor used. Nevertheless, the information provided to a sufficient HiSilicon Hi3556 SoC and one OmniVision OV4689 image sensor to interpret. Incidentally, the manufacturer also uses the same image processor in its own "YI Lite" Action Cam, The system-on-chip consists of an ARM Cortex-A17 with 1.25 GHz clock rate and an ARM Cortex-A7 with 800 MHz clock rate. The 1 / 3 inch image processor resolves with 4 megapixels. The pixel size is 2.0 μm. The lens with F1.9 aperture has a fixed focus and a 140.6 ° wide angle.

The display of the type TFT LCD owns one Diagonal of 2.7 inches and solve it 960 240 x pixels on. The representation depends strongly on the respective viewing angle. Looking diagonally on the display, the contrast drops significantly and the displayed is difficult to see.

The YI Ultra Dashcam is capable of its own 2.4 GHz WLAN build. For this the camera has a WiFi module integrated, which the 802.11n standard supported. The encryption takes place after the WPA2 security standard, Over the WLAN it is possible to connect with a mobile device to the Dashcam. WLAN SSID and password can be changed via the app.

Other features of the YI Dashcam are a omnidirectional noise reduction microphone and an Loudspeakers, Power is supplied via the micro USB socket. At the same time the camera has one Battery with a capacity of 400 mAh integrated. However, this is purely the emergency power supply. The sensory equipment is limited to one 3 axes G-sensor.

The Dashcam comes with everything you need for commissioning. The multilingual and thus also German user manual deals with the most important points for commissioning and also explains the individual functions of the camera. The attachment is easy by hand and is as far as self-explanatory. The fact that the camera is connected by a thread with the holder, a universal holder with matching thread can be used. memory Cards are supported by YI Technology with up to 128GB memory size. Recommended are memory cards Class 10 U1 or higher. 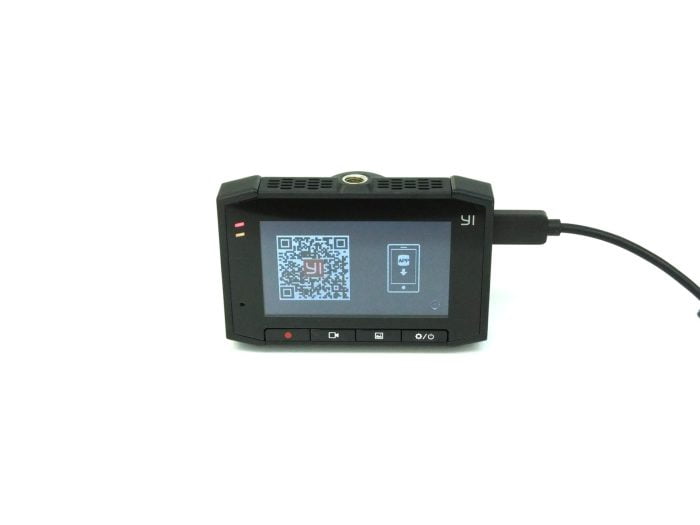 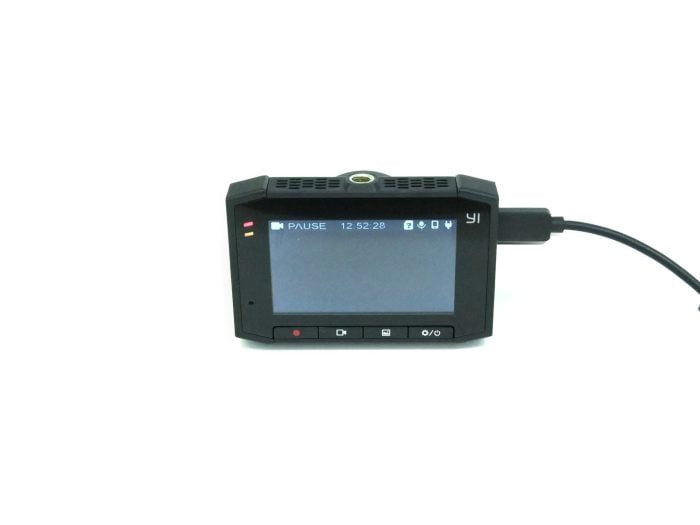 The user interface of the YI Ultra Dashcam has a clear structure. You will be greeted by one Home screen with live image, An upper bar displays information about the current recording, time, memory status, microphone, Wi-Fi, and power. The language of the user interface can be changed to German. If you press the power button, you get to the settings menu. The following settings are possible: 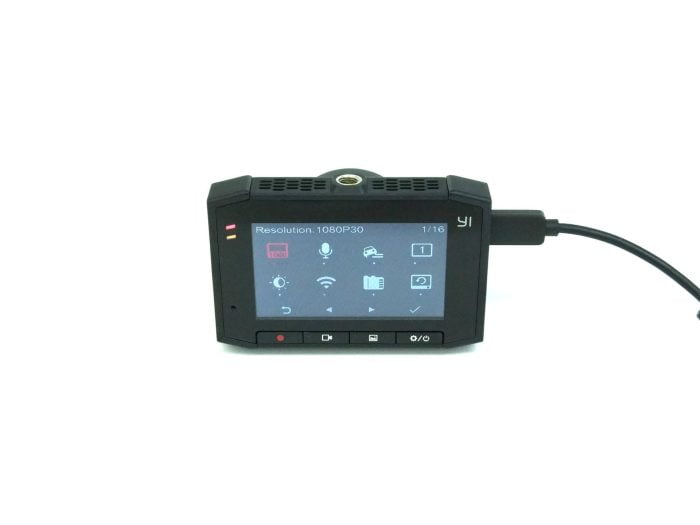 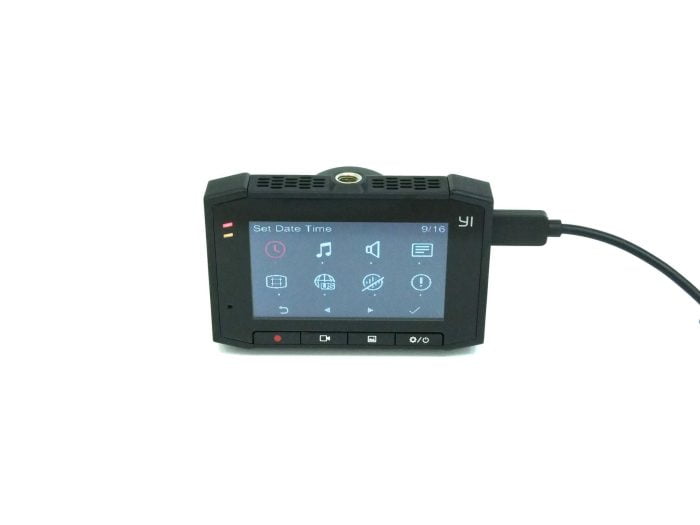 Like the predecessor model, the YI Ultra Dashcam can also be downloaded via Wi-Fi connected to a mobile device become. For this purpose, the manufacturer provides the so-called "YI Dashcam App" Available for free download from both the Google PlayStore and the Apple App Store. The connection is established via the WLAN, which sets up the camera.

The possibilities of the app are clear. In addition to one Stream the live image on the mobile device, there is also the possibility on the Gallery access, trigger image capturing via the app and Camera settings make. In the test, the connection quality between mobile device and dashcam proved to be good. The live image is transmitted with minimal delay and access to the gallery succeeds quickly, so that recordings can be transmitted in the shortest possible time.

Functionally, the camera is equipped according to the price. A GPS module is not installed, which means that the route and the speed can not be detected. Also not available is one Driver Assistance System (ADAS), Lane changes or collision warnings are thus not displayed. However, theoretically it would be possible to implement a route recording and a driver assistance system software using the YI dashcam app, as is the case with the previous model. The extent to which YI Technology will investigate will be revealed in future firmware updates. But now to the existing functions.

A setting that can not be selected via the camera's user interface, but can only be activated via the app, is the language assistant. Two voice commands are supported. With the command "YI begin recording" the camera starts - although minimally delayed - a video recording. The command "YI take photo" triggers an image acquisition. The commands are only recognized in English. The recognition rate was convincing in the test. Even with moderate radio volume, the commands were recognized.

So-called emergency rooms can be triggered manually, but also automatically. The manual release done by pressing the Emergency button. automatic triggering succeeds over the Collision detection of the G sensor, The sensitivity of the G-sensor can, as already mentioned, be adjusted in the steps Low, Medium and High. In the test, the average setting has been found to be optimal. Potholes or sleepers, as it should be, did not trigger an emergency response. Unfortunately, there is no collision detection in the parked state.

The Loop recording mode is enabled by default and can not be disabled. This mode means that the camera automatically overwrites previous recordings when the memory card is fully loaded. Individual recordings are stored in one-minute segments. Emergency recordings are not overwritten but saved in a separate folder.

By means of the Image distortion correction can be the so-called "Fisheye effect"which arises from the wide-angle, eliminate it on the software side. If this function is activated, the image area is minimized at the same time.

Another feature of the YI Ultra Dashcam is the Fahrbericht, Rides that last longer than 10 minutes are summarized at the end of the journey in a short overview. It shows the travel time, how often the vehicle was braked and how often the distance was not maintained correctly. In the test, the driving report has proved useless. While it's interesting to know how long you've spent on the distance covered, sharp braking or distance control has not been captured correctly. There is still room for improvement here!

Decisive for a dashcam is of course a good recording quality. Vehicle license plates should be reasonably easily recognizable both during the day and at night at best. The YI Ultra Dashcam makes video recordings up to a resolution of 2688 x 1520 pixels at 30 images-per-second at. With a resolution of 1920 1080 x pixels are even maximum 60 pictures-per-second possible. The output format is MP4. The video compression is done according to the H.264 standard. The average video bit rate is 22.000 kbit / s. The sound is recorded in mono. The Audio bit rate 95 is kbit / s. The sampling rate is at 16 kHz.

From theory to practice. By the large field of view of 140.6 ° the entire traffic area is recorded. In addition to the own lane and the counter lane also sidewalks are still in sight. The Detail reproduction is good. Vehicle license plates of the vehicles in front are recognizably recorded. Signs of oncoming traffic are also still recognizable depending on the proportion of movement. at Darkness or at night, also decreases the detail reproduction and recordings appear increasingly blurred. Vehicle registration of the oncoming traffic and also of distant, preceding vehicles are despite "SUPER WDR 2.0" (Wide Dynamic Range) outshone and barely legible. However, the YI Ultra Dashcam does not differ from other and much more expensive dashcams, which also barely register vehicle license plates at night.

Colors fill the dashcam. image artifacts Do not occur even with fast image movements. To detect slightly, both during the day and even more at night, is one slight image noisewhich, however, does not affect the detail rendering. 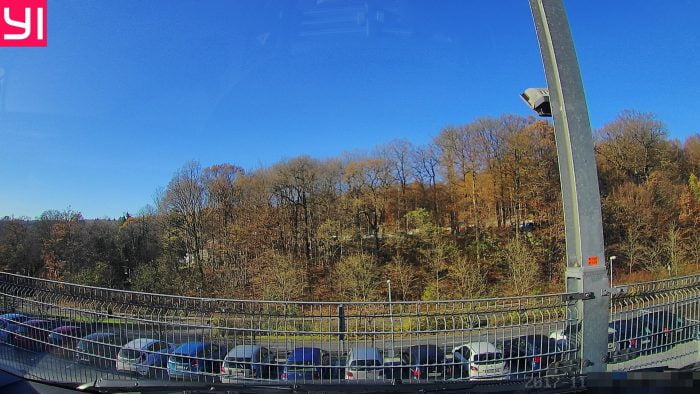 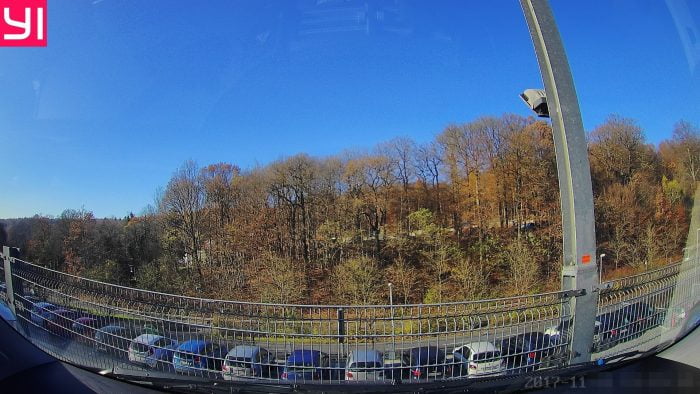 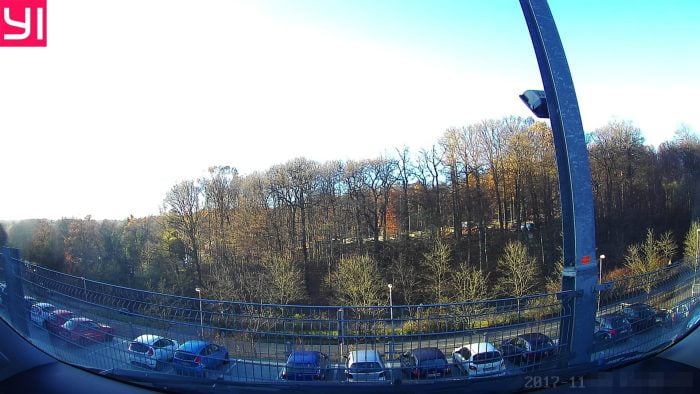 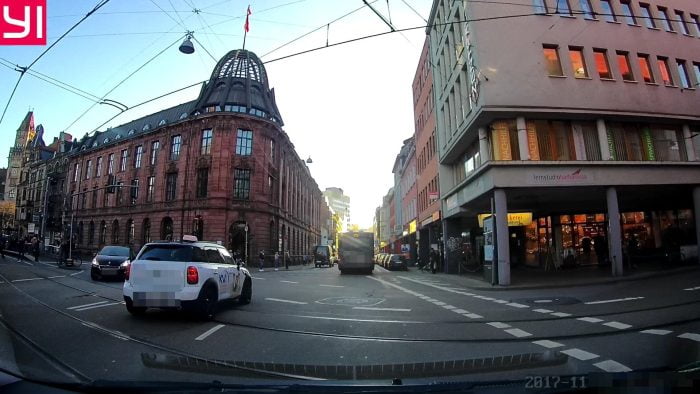 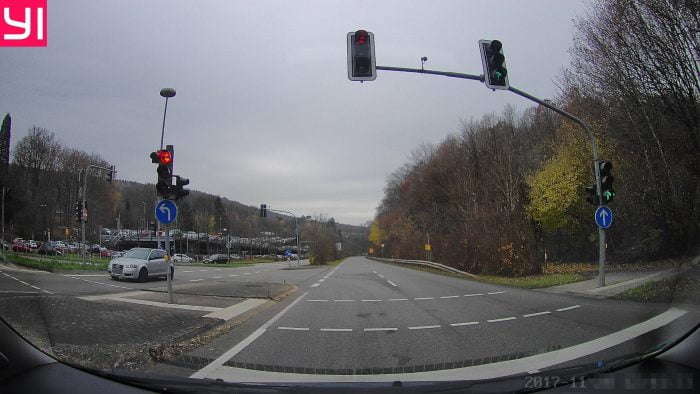 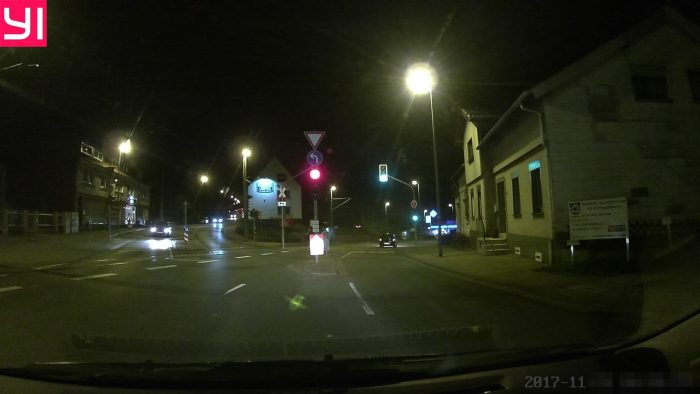 The main criticism is the recording quality of the 1080p @ 60 recording mode. Recordings in this mode are strong overexposedwhy the sky is literally white and details are lost. With a firmware update, this problem should be remediable. The recording quality is acceptable. Loud driving noises are well reduced in their overall volume. Spoken speech is received understandably. Overall, the sound sounds slightly dull.

The YI Ultra Dashcam is a low-priced entry-level solution in the field of car cameras, but has experienced only a slight performance upgrade compared to its predecessor. Essential functions are available and overall the Ultra Dashcam impresses with a high-resolution and above all detailed recording quality both during the day and at night. You do not have to rely on GPS for route analysis, as well as on a driver assistance system. Smaller problems are still with the firmware, which still has some errors in 1080p recording mode.

Hello, is the old Xiaomi Dash camera or the new YI Dash camera rather recommended? I want to get one for the car, but I do not know which one is better now. I do not need GPS, ADAS and son Frippery. My only concern is that the shots are good and the holder is good. Otherwise, it should be able to record consistently.

Hi Emil, if you're into video quality, you're better served with the newer YI Ultra. If it's all about the price, reach for the Xiaoyi Dashcam. There are also differences in the brackets. The YI Ultra provides two brackets and is threaded. The Xiaoyi Dashcam has a quick-release mount, but is attached with a glue pad. A loop recording function has both cameras.