by Timo2th of June 2018
Xiaomi always surprises with new products and has a few years now also a small router series on the market, which is expanded annually. The current model and successor to the well-known Xiaomi Mi Mini Router is the Xiaomi Mi WiFi Router 3. The Xiaomi router was now in use for several days, which is why we summarized our experience with the device in the review.
Overview
Manufacturer/Model

The Xiaomi router 3 is now an obsolete model. The successor model is the Xiaomi router 3Gwho with constant price with Gigabit WAN and LAN is equipped, as well USB 3.0 supported. If you are faced with the election, you should definitely opt for the new model!

To the Xiaomi router 3G test

Thankfully, the Xiaomi Mi WiFi Router 3 has been released for this review Gearbest provided.

Compared to the predecessor of the Xiaomi Mi WiFi Router 3 no longer in a compact box, but in a much larger box. The scope of delivery is however remained the same. Next to the Xiaomi router 3 lay one Chinese user manual at, as well as was one 12V power supply contain. Before buying a Xiaomi product, you should be aware that this version is often sold for the Chinese market version, which is not accompanied by an English-speaking, even German-language manual, as well as the power supply NEMA-1 (Type-A) connector has. Thus one necessarily needs one more EU adapterHowever, most China shops settle.

The Xiaomi Mi WiFi Router 3 differs from its predecessor in both size and design. Although the new model still has the plain white plastic case with the front-mounted LED, the design is not quite as compact as the Xiaomi Mini Router, because the Xiaomi router 3 now has 4 Dual Band AC Antennas, These antennas can be tilted in three positions and firmly connected to the device. 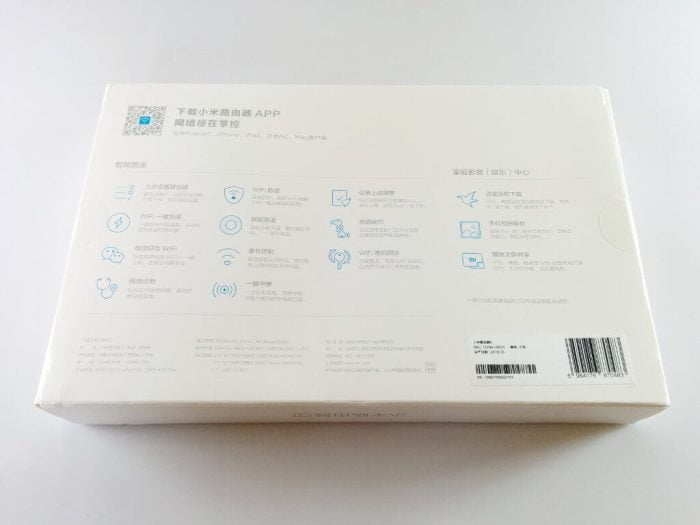 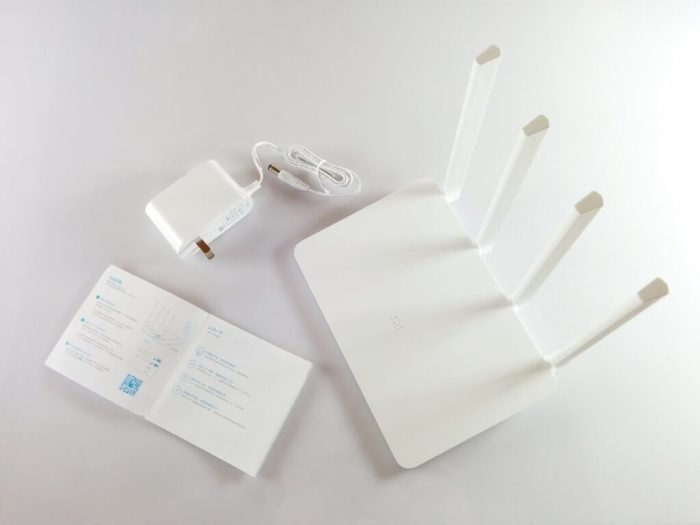 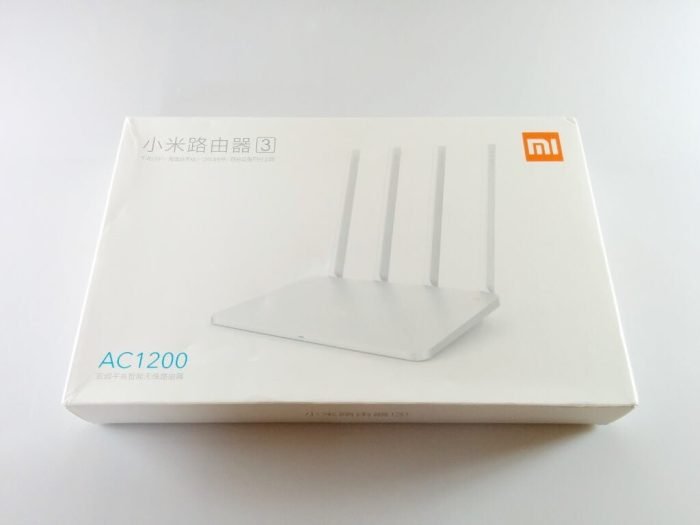 The hardware of the new Xiaomi router has hardly changed. As a processor, as in the predecessor MediaTek MT7620A Processor used with 580MHz overclocked. Also the Memory was left at 128MB, But what has changed is the Flash memory increasing from 16MB to 128MB wurde.

The rear ports have also been retained. The Xiaomi Mi WiFi Router 3 has one WAN port, 2 LAN ports, a USB 2.0 port, a reset button and just the 12V power input, Unfortunately, Xiaomi has the network ports on the maximum transmission rate at 100Mbit / s leave. 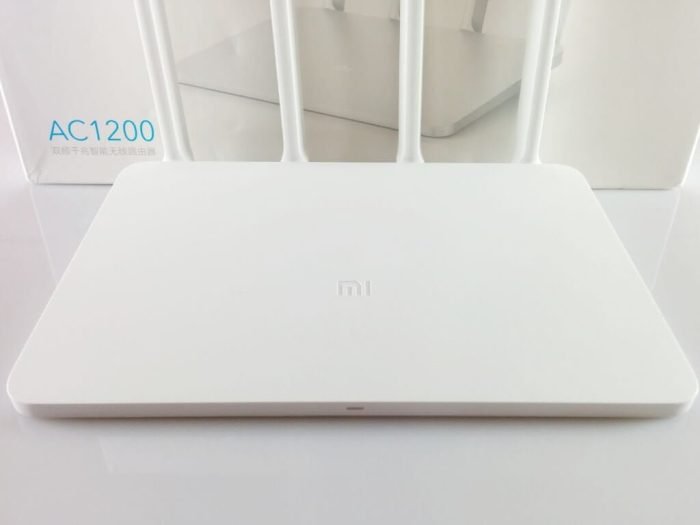 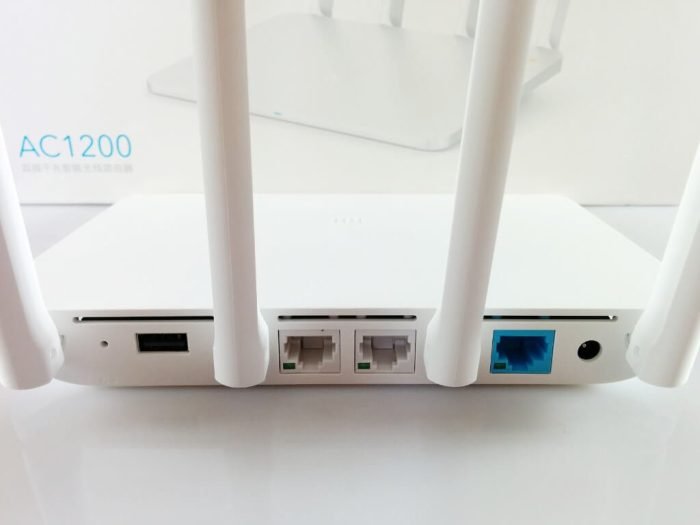 The commissioning is in spite of the Chinese web interface as quite easy. While you can use the Google translator of the smartphone to help you set up, the steps required for configuration are largely self-explanatory. Only the name of the WLAN, the password and the admin password of the web interface are required, which can be set individually. Once the Xiaomi Mi WiFi Router 3 is set up, a network connection should be established as well, which is why the web interface can now be translated using the Google Translate browser.

The web interface of the Xiaomi router has a clear layout and offers many options. The main overview shows, among other things, the currently connected devices together with the transferred data volume of the individual devices, you can see the current transmission speed, the CPU utilization and the memory usage. You can use the USB port of the router connect external mediumwhat files can be shared within the network. Thus, the Xiaomi router 3 as a NAS use. 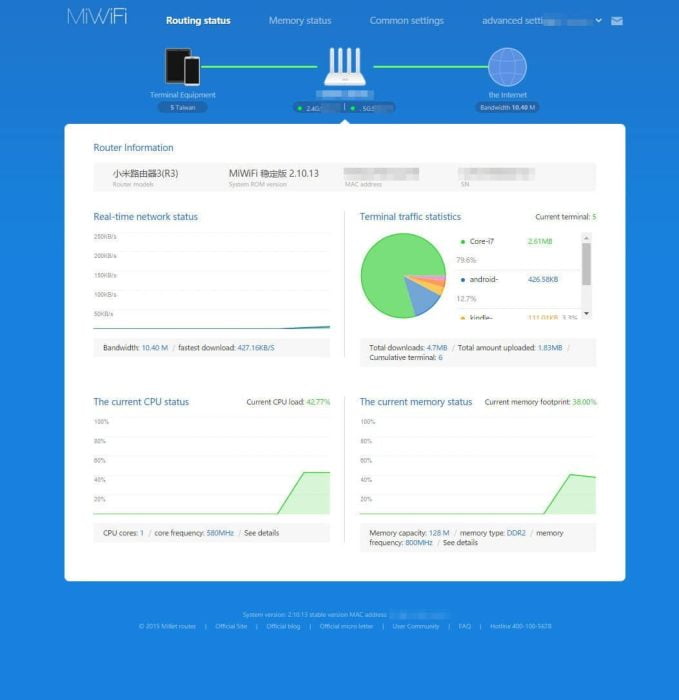 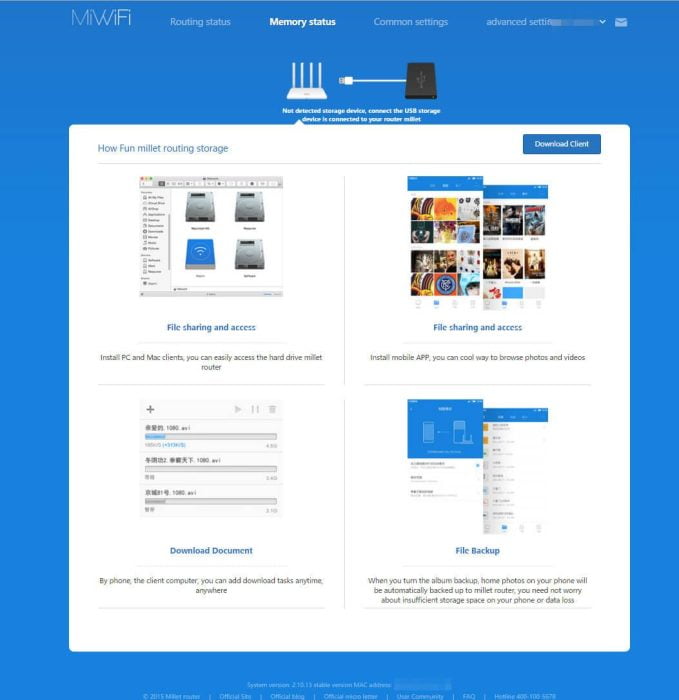 In the WiFi settings, the 2.4G and 5G networks can be networked together, which always selects the stronger network automatically on the connected device. Both networks can also be separated. Stand in the encryption WPA, WPA2 and WPA + WPA2 Hybrid to disposal. Of course, the channel, the signal strength and the bandwidth can be set. The channels of the 2.4G network range from 1 to 13. The 5G network from 36 to 165. 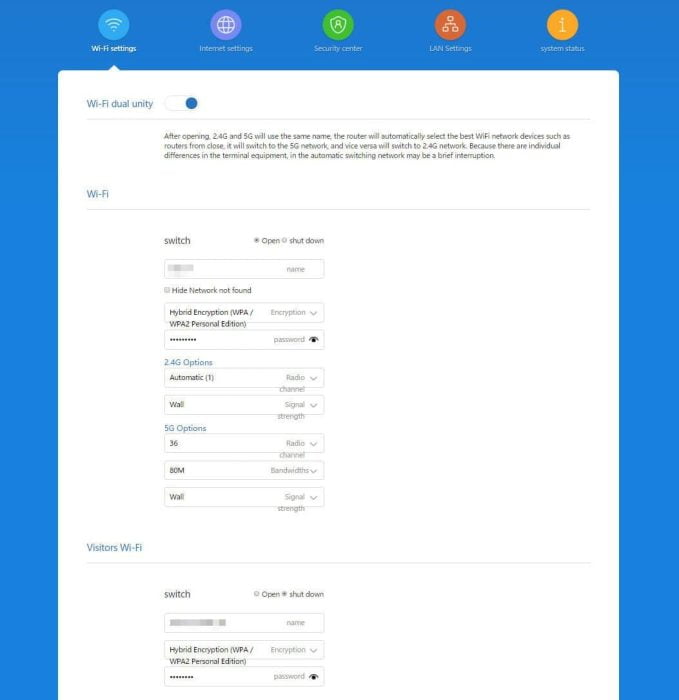 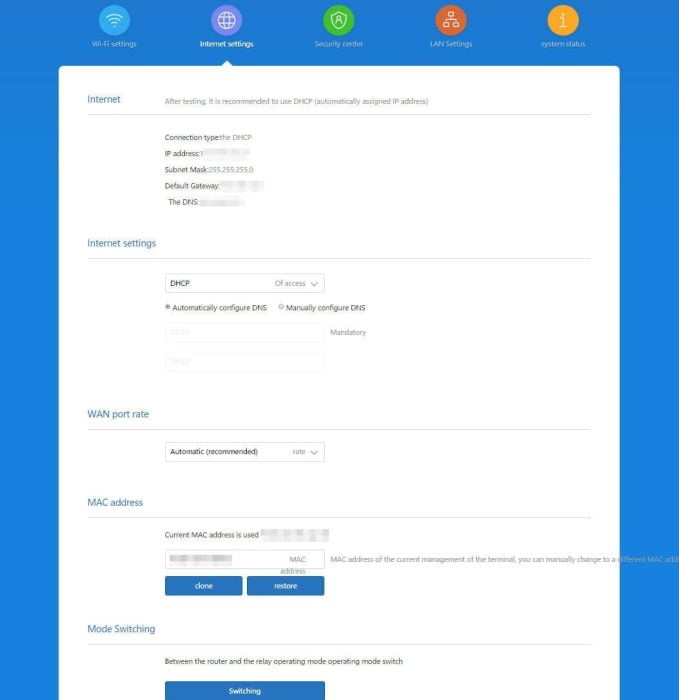 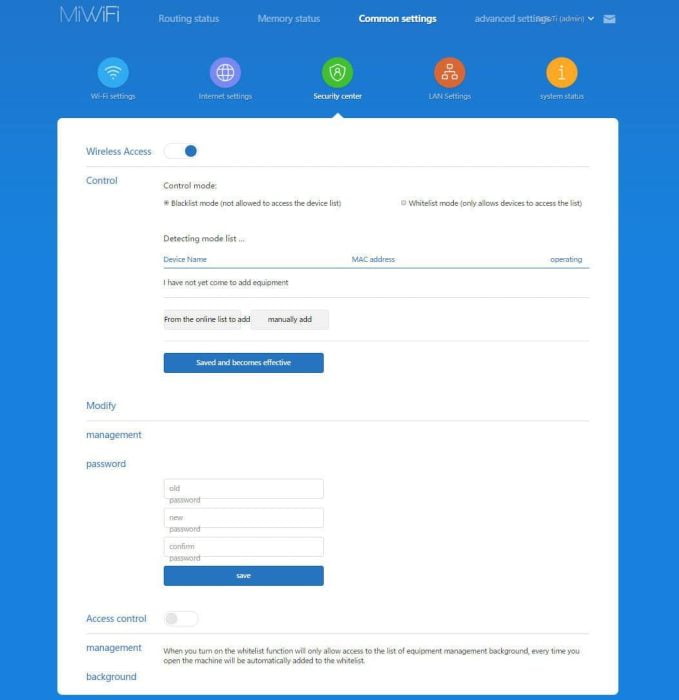 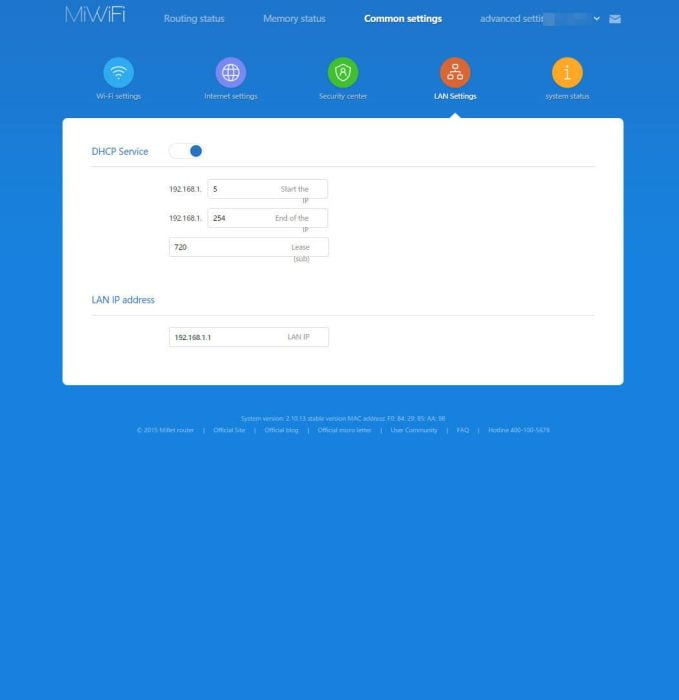 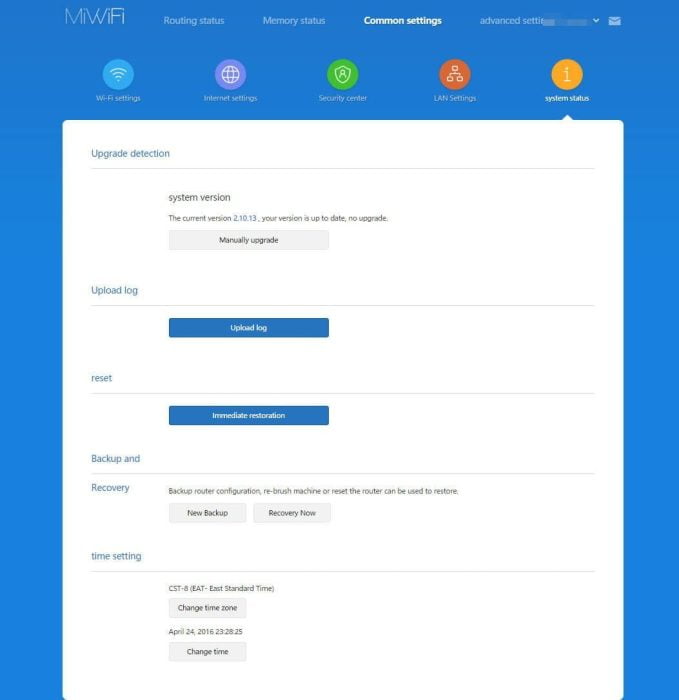 Of course, settings regarding DHCP, DNS, Mac address and WAN port rate can be made. Also, the router can be used as a repeater. In the security settings, a MAC filter can be activated, in which both a whitelist and a blacklist can be created. In the advanced settings, there is a QoS function for regulating the transmission speed, a DDNS can be entered, port forwarding is available, UPnP can be activated, as well as you can set up a VPN (PPTP or L2TP) directly on the router. 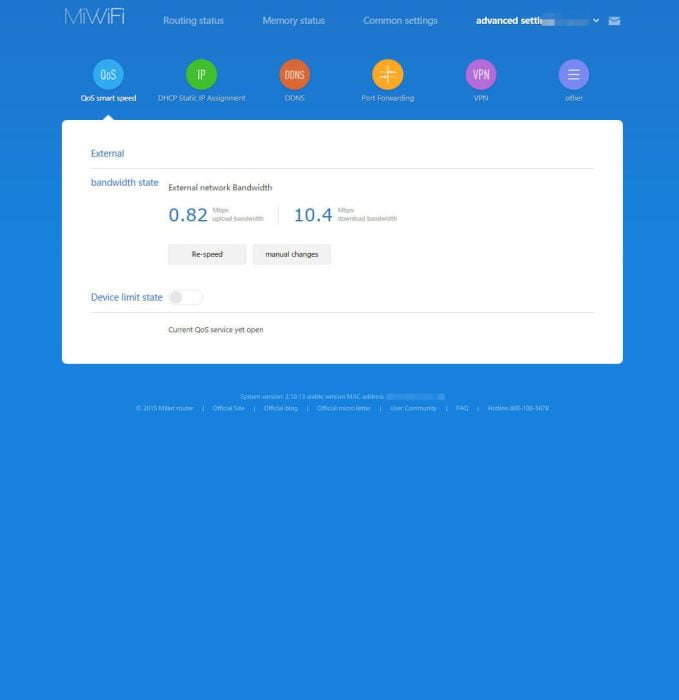 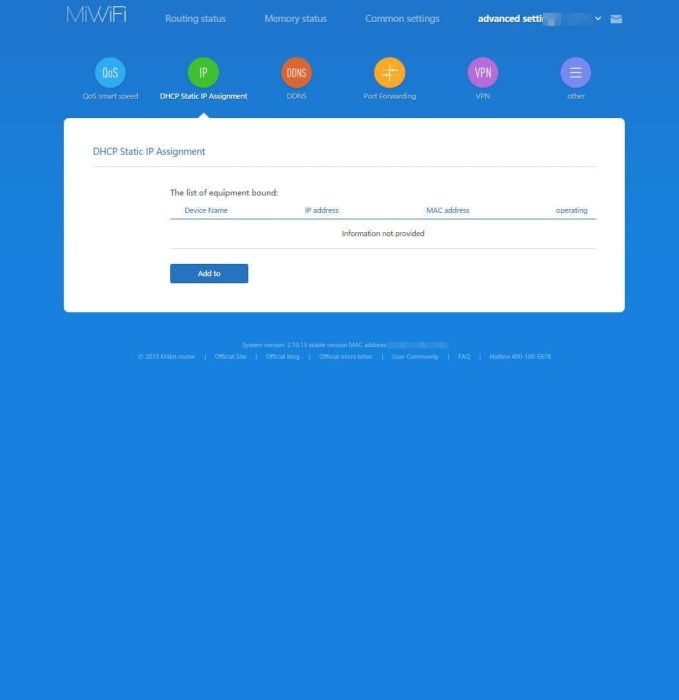 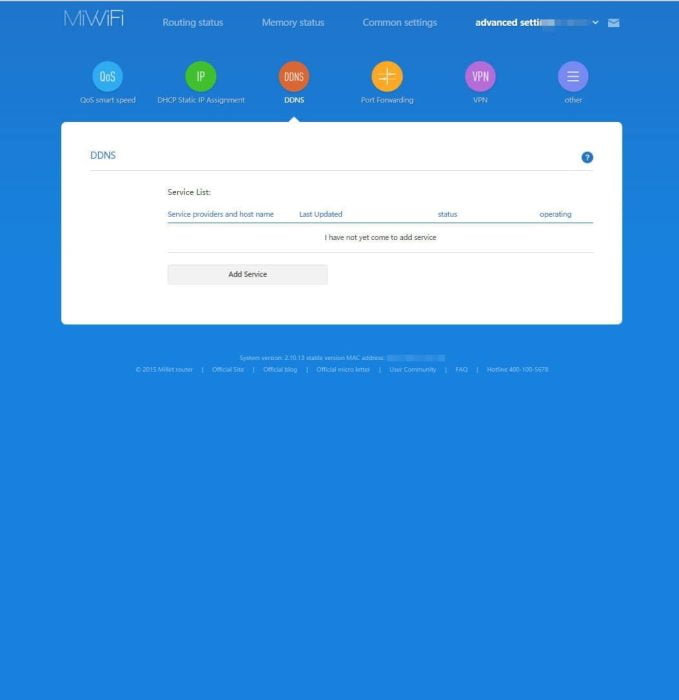 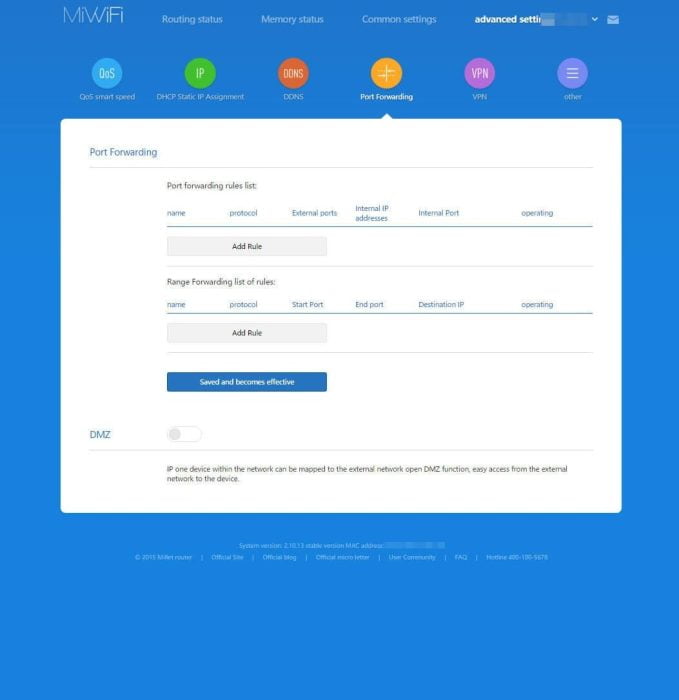 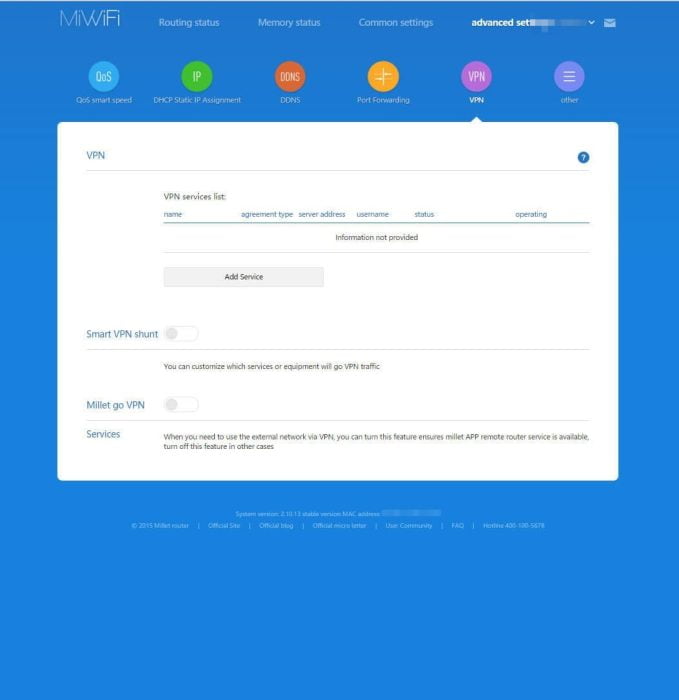 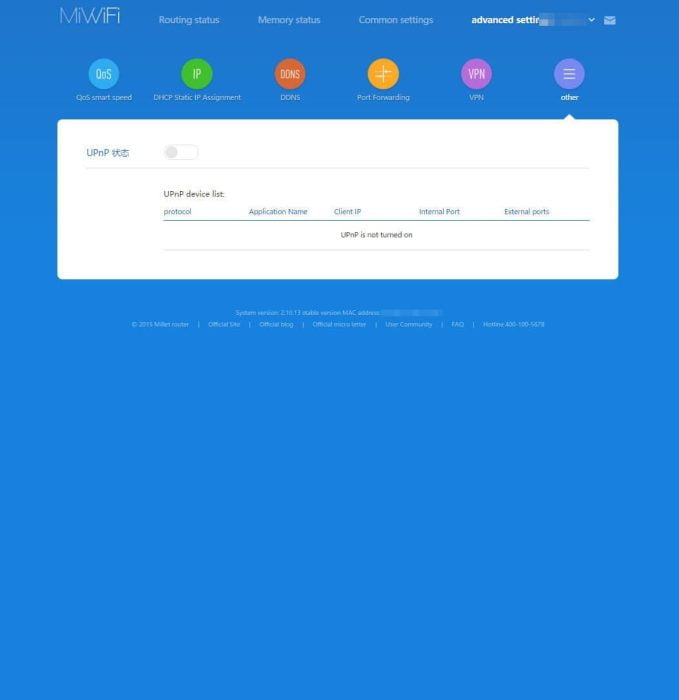 The Xiaomi WiFi Router 3 also has its own Android App, which can be used similarly to the web interface. However, plugins can also be installed via the app, such as an ad blocker or antivirus protection. These are plugins intended for the Chinese market, so it is not recommended to install them. 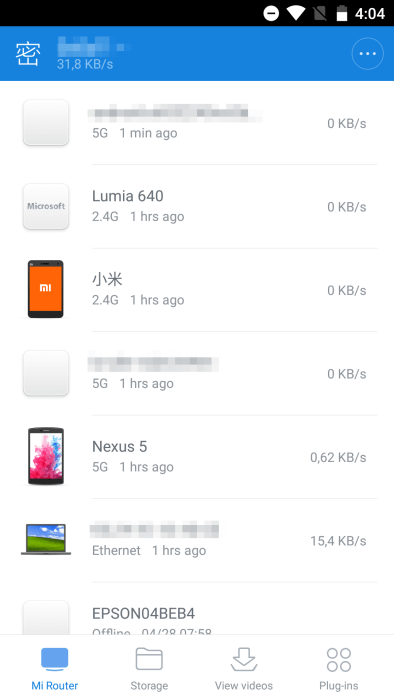 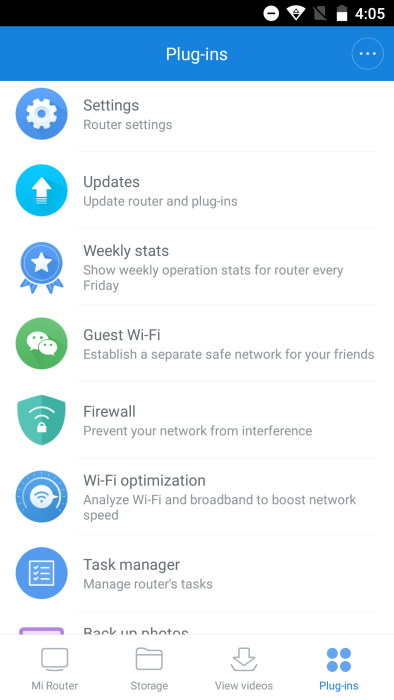 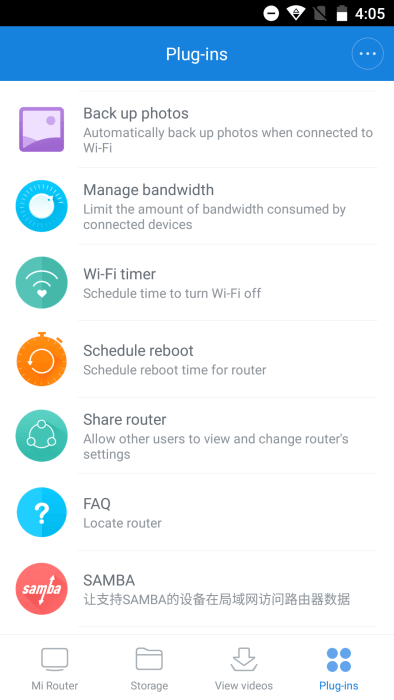 After a long period of operation, it can be stated that the router runs extremely stable. Crashes did not occur during the test. All available functions have been tested error free. The transition between the 2.4G and 5G network was fluent to barely noticeable. The range and signal strength has been improved compared to the Xiaomi Mini Router. Even the small model was characterized by an excellent transmission range, the Xiaomi WiFi router 3 lays on a fad.

So far there is no flashable OpenWrt for the new Xiaomi router 3, but due to the similar hardware to the previous model, one can assume that for this router in a very short time a flashable OpenWrt is available. If there is news, I will update the review at this point.

The Xiaomi Mi WiFi Router 3 brings a few innovations and is only recommended for first time buyers. The signal strength and transmission range have improved, but compared to its predecessor, the difference is minimal. The web interface has also remained the same and offers no innovations.
For first-time buyers, the new Xiaomi router is definitely recommended and as soon as OpenWrt for this device is available, this router is certainly not a bad buy. If you already own the predecessor model, I recommend waiting for the next generation.