by Timo17. August 2016
The UMi Super is the first UMi smartphone to feature the latest-generation MediaTek processor, the Helio P10. In combination with 4GB RAM, the UMi Super looks especially on the data sheet "Super", but how this smartphone strikes in everyday life, I've tested for you!
Overview
Manufacturer/Model

First impression of the UMi Super 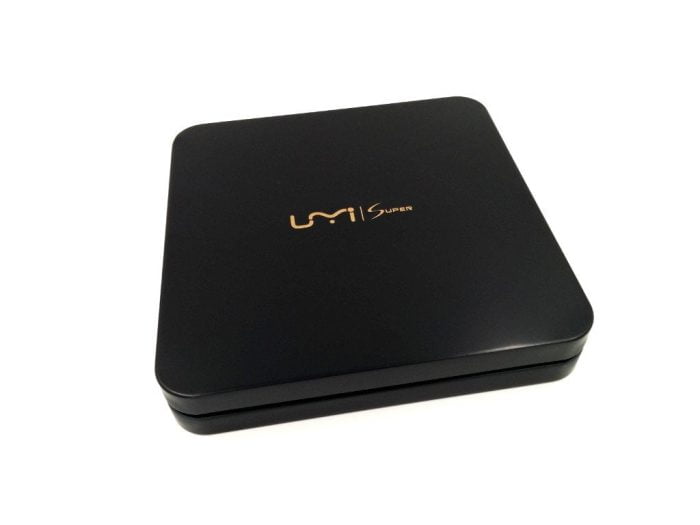 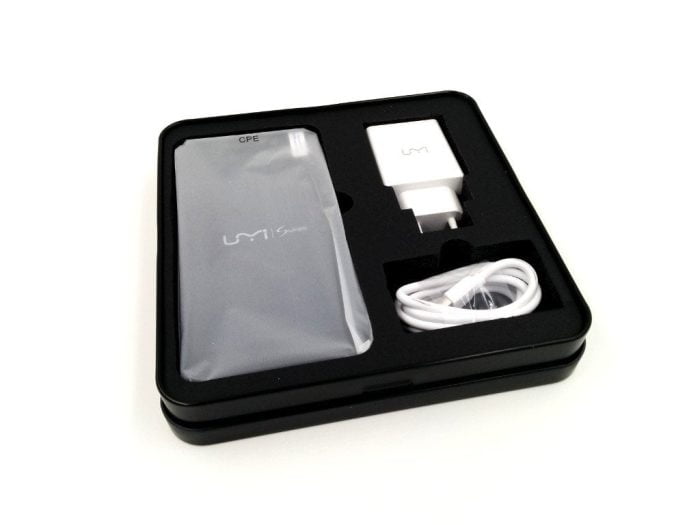 The UMi Super is delivered in an attractive tin box, which in addition to the smartphone still a USB Type-C charging cable, one Charging Adapter (5V - 1.67A) and Manual includes. On SIM Pin To open the side-mounted SIM slot is included in the manual. Also one Screen Protector is already on the smartphone and is properly applied by the factory. 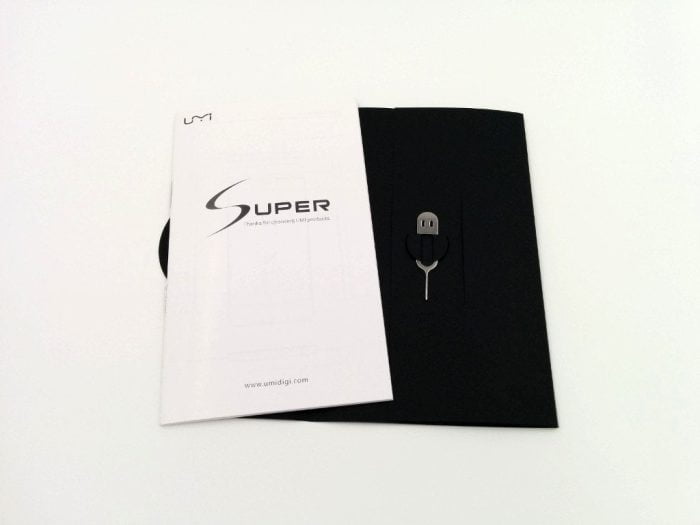 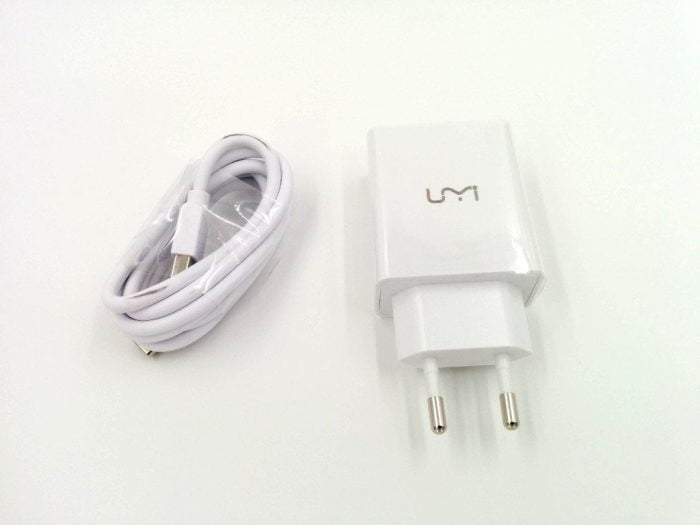 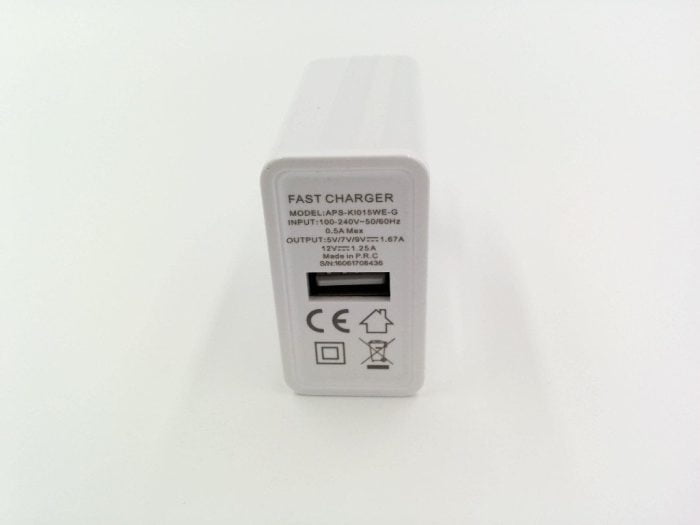 Superficially, the UMi Super leaves a very good impression. The metal unibody Design looks particularly high quality and at one Weight of 196g The smartphone is very good in the hand. Nevertheless, the super smartphone is not perfect. Especially the Side-mounted control buttons sit a bit too loose in my case for my taste, which makes a slight rustling sound at every minute movement. The pressure point of the keys, on the other hand, feels good.

If we take a closer look at the smartphone, we have the front side 5.5 inch large IPS display, Below is a circular notification LEDthat pulsates and shines in seven different colors. Interesting is the operation of the smartphone. Here are one hand three capacitive buttons available under the display, or you can activate the settings in the settings virtual navigation bar, which deactivates the capacitive buttons. Unfortunately, only the middle button is lit, which also contains the circular notification LED. Above the display are the auricle, One 5 megapixel front camera (without LED flash), as well as the Proximity sensor. 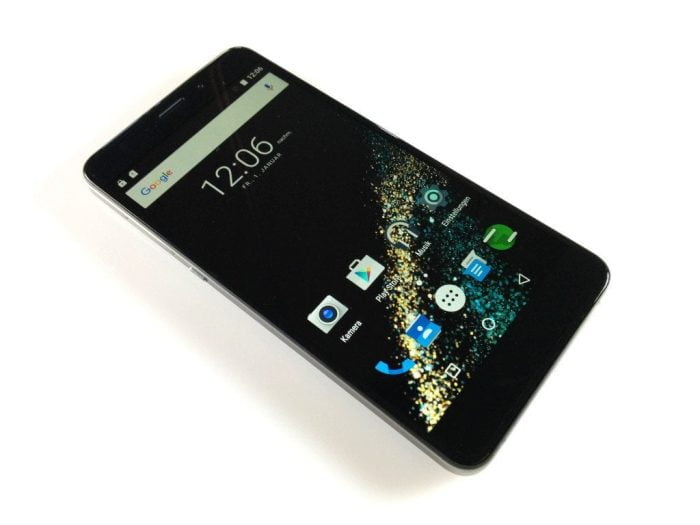 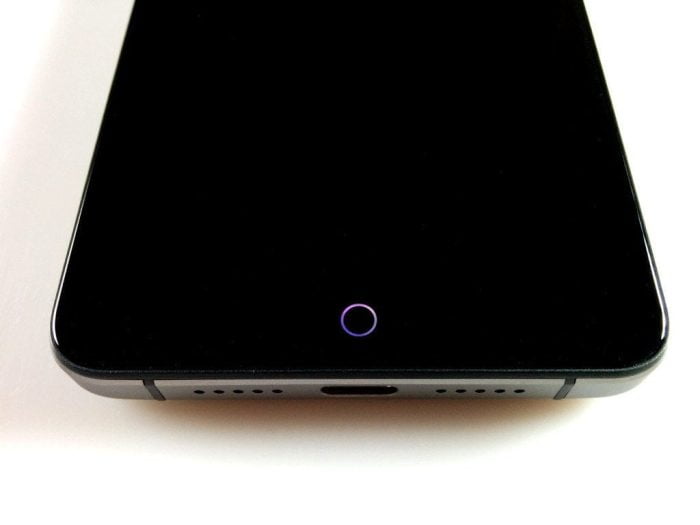 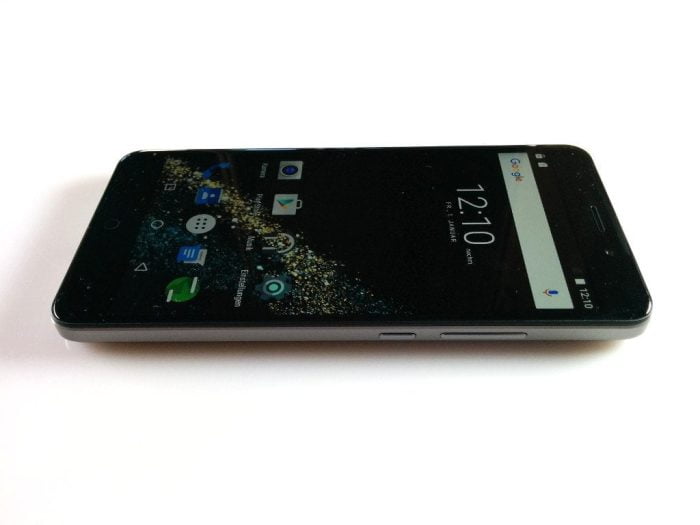 The case frame includes one at the bottom USB Type-C female and two speaker outputs, At the top is a 3.5mm audio output, The side buttons are one Power and Volume rocker (right) and a Quick start button (left), The SIM card slot is located on the left side of the frame. To use the Dual SIM function can two Micro SIM cards be inserted. Who on the other hand depends on the memory extension by means of a micro SD memory card, which must because of the "Hybrid slots" do without the second SIM slot!

The rear of the UMi Super has a 13 Megapixel main camera including one dual LED flash, Below is a Fingerprint scanner, Because of the unibody design, the back can not be removed, which is why the battery can not be changed! 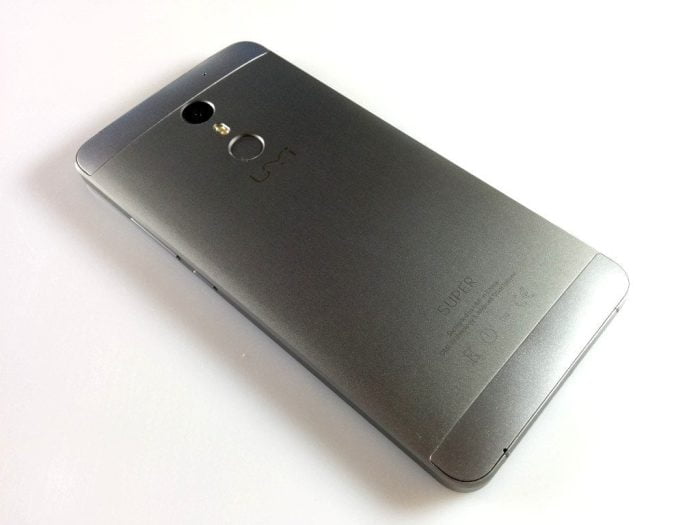 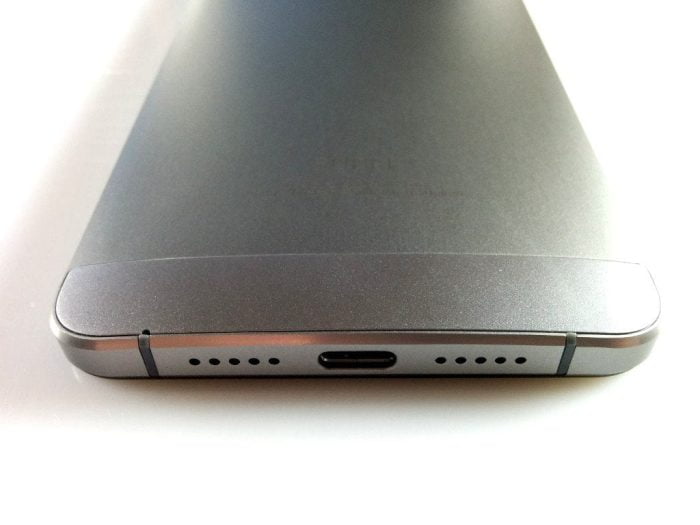 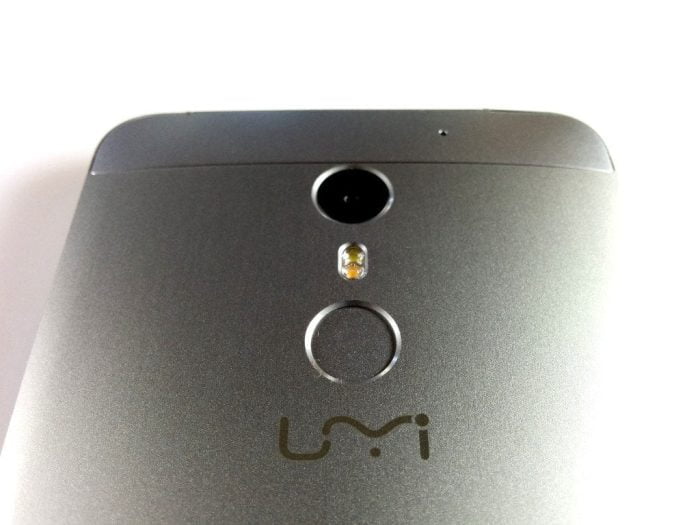 The maximum display brightness is enough to make the best use of the smartphone even in strong sunlight. Disturbing reflections are not noticeable. A good viewing angle stability is also given. Even with a flat viewing angle, the display remains easy to read. The touch screen of the UMi Super supports maximum 5 finger multitouch, Entries are accurately recognized and implemented. A Dirt-resistant coating with 2.5D display glass Prevents fingerprints and other dirt as much as possible.

For the first time UMi relies on a MediaTek processor of the latest generation. Of the Helio P10 SoC (MT6755) is an octa-core processor whose cores clock with 1.95GHz. As a GPU comes one Mali T860 used, which also current Android games are fluently playable.

With a total of 4GB memory the UMi Super is optimally equipped to guarantee a smooth user experience in everyday life. Apps can be opened in fractions of a second and multitasking is not a hurdle for this smartphone. The internal memory amounts to 32GB, By means of a Micro SD memory card In addition, the memory can be extended by a maximum of 256GB. 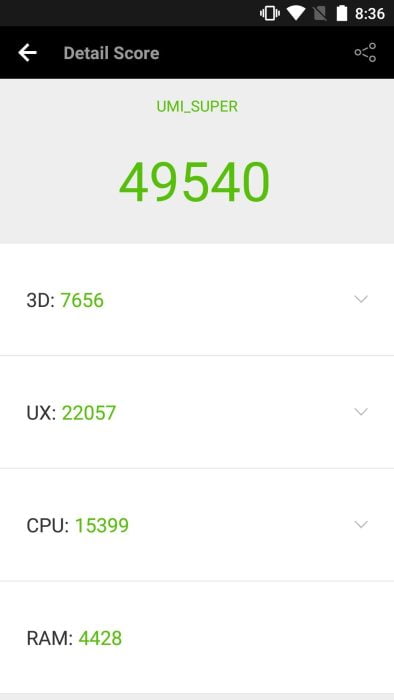 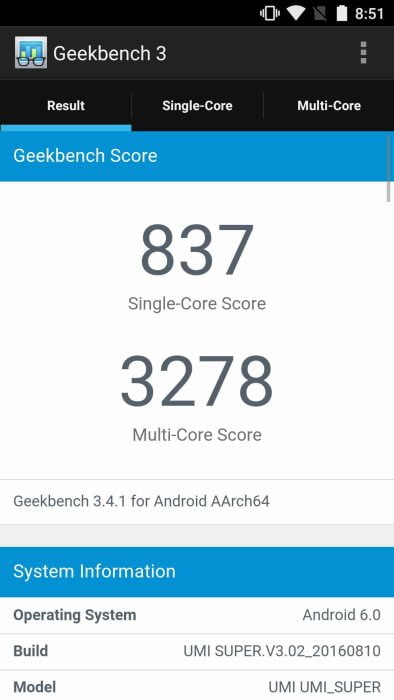 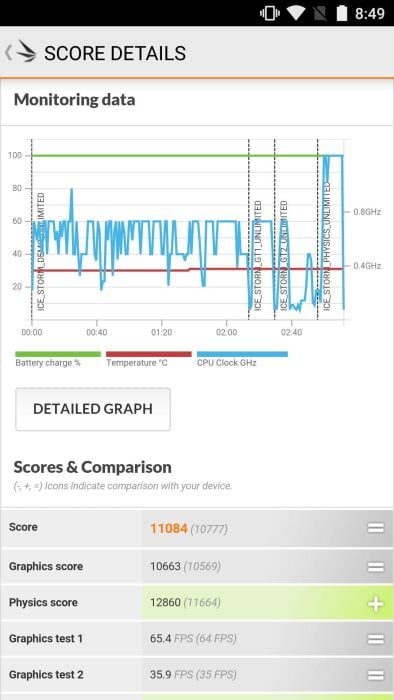 The UMi Super is delivered with Android 6.0, The user interface was only minimally modified and is based largely on Stock Android. There are no disturbing custom themes and even third-party apps are not pre-installed except for a flashlight app.

In the menu item "Harlequin LED Notification" the notification LED can be configured. Here are different ways to view call notifications, or whether the LED should be activated during charging or when the battery is low. Unfortunately, apps can not be individually set to the notification LED. Updates get the UMi Super "OTA" (Over The Air). 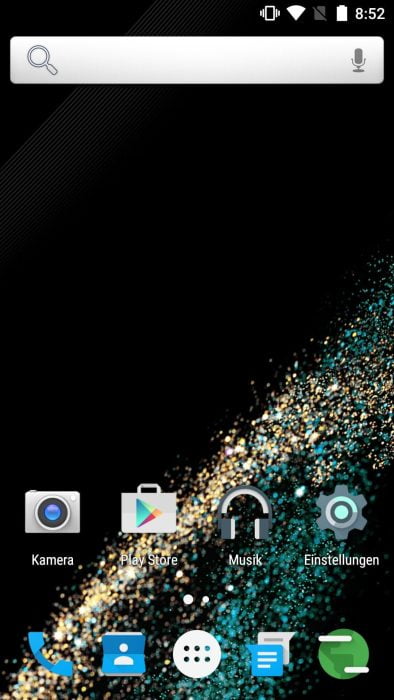 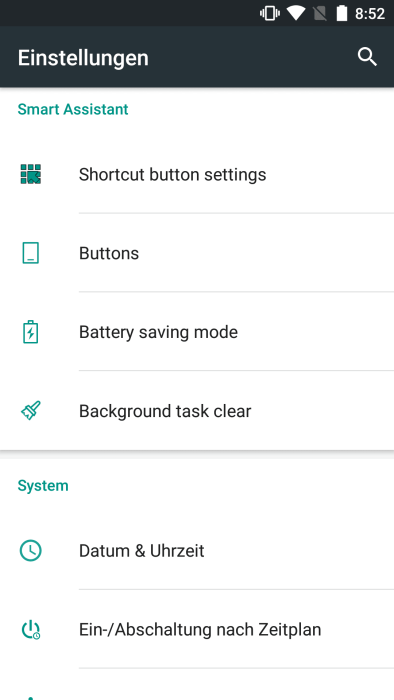 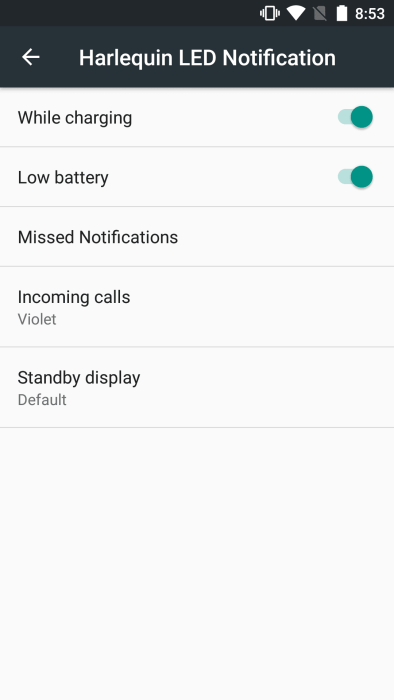 With regard to the main camera is the UMi Super with a 13 megapixel image sensor from Panasonic fitted. The F-number is f / 2.0, Autofocus is available and also one dual LED flash is located below the camera.

The pictures taken with the main camera can convince as far as possible. That, especially in low light conditions, Picture noise is very limited, The color representation is so good. The colors are not too strong, but not too pale. What bothers me personally is one slight blurthat lays over the entire picture. The autofocus focuses on 1-2 seconds on average. The triggering time is still average.

The front camera solve with 5 Megapixel on. In good light conditions, the shots are quite suitable for selfies or for a video conference. Also interesting are the games within the MediaTek Camera App, From an automatic wrinkle removal, an additional blur on a beauty mode, everything is represented. 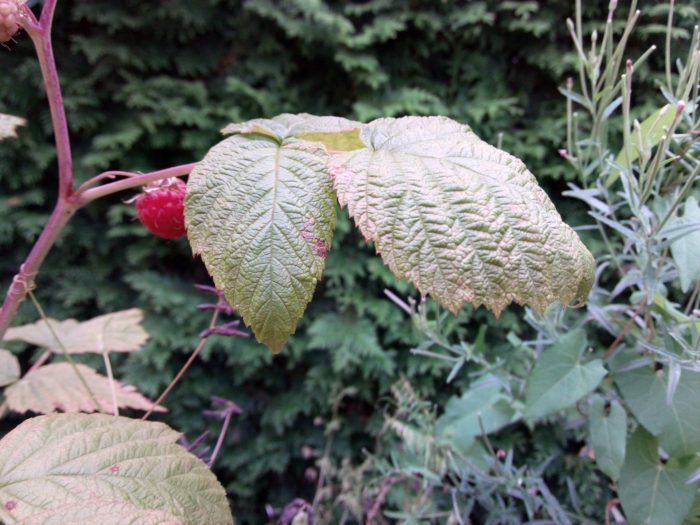 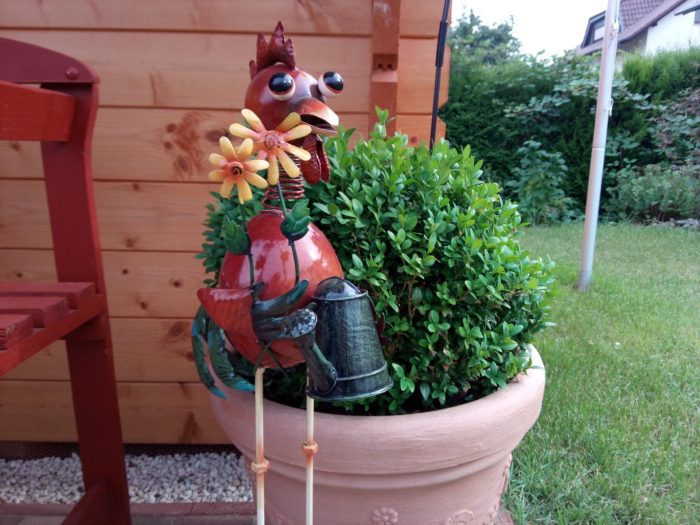 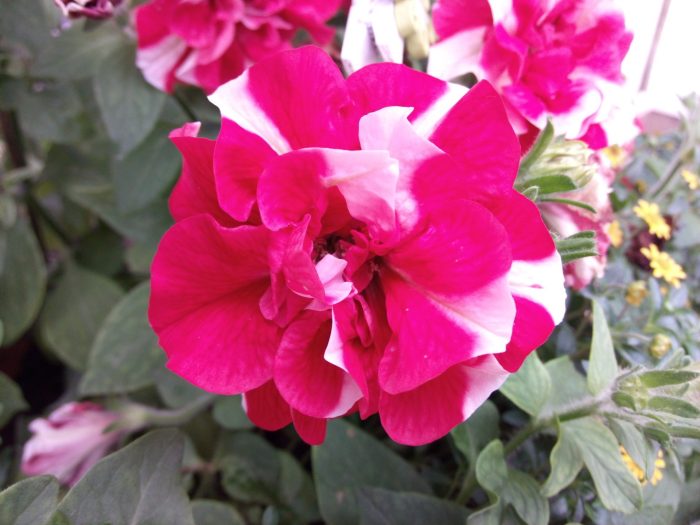 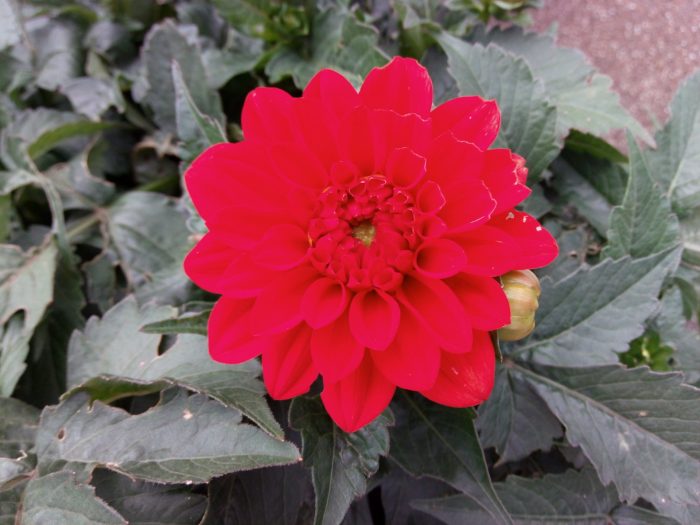 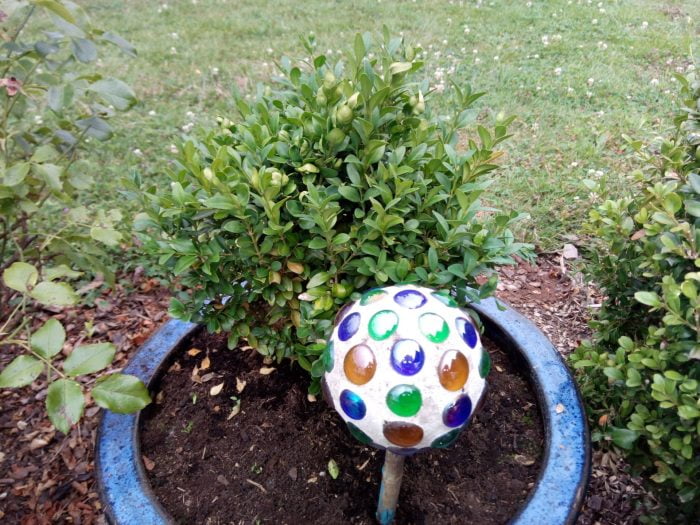 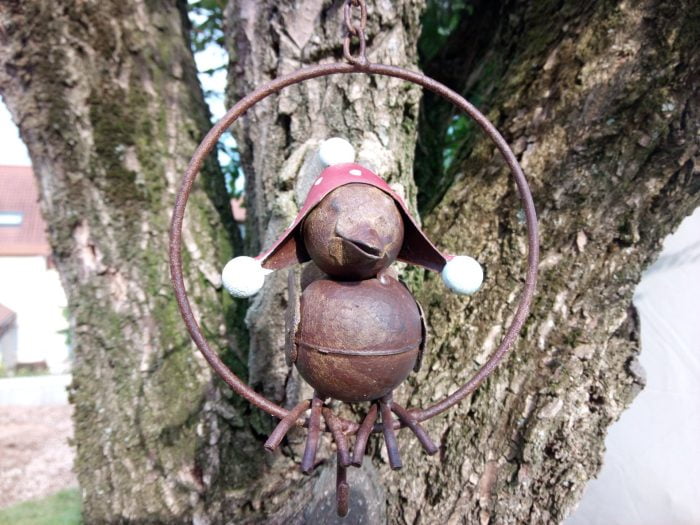 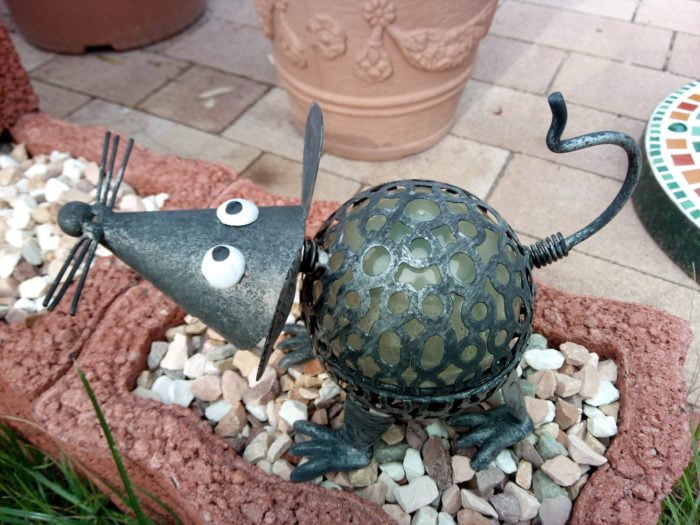 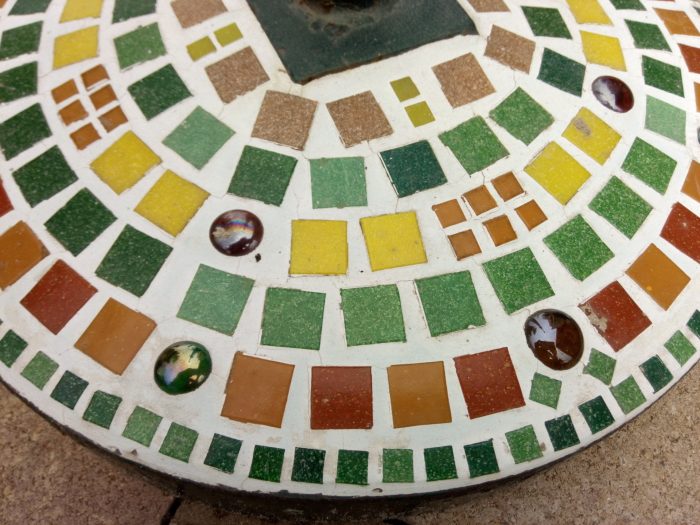 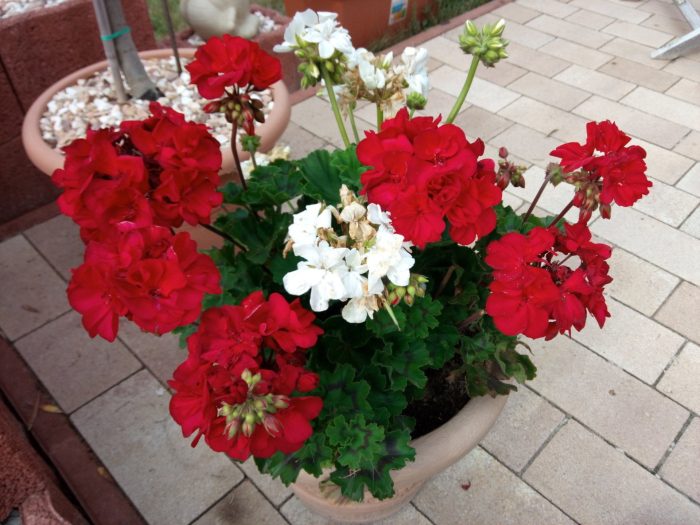 The fingerprint scanner of the UMi Super works comparatively well. With direct edition of the finger there was hardly a misrecognition in the test phase. Auch lateral finger pads are well recognized and false identifications can be reduced very well by repeatedly scanning the finger. The unlock time is pleasantly short.

The GPS fix was found after a few seconds. The Stability of the signal while a running navigation is good. By the additional E-Compass the navigation is even more accurate. Also, the additional sensors perform their work perfectly. Overall, there is one brightness sensor, one Accelerometer, gyroscope, one Proximity sensor and one G-Sensor. 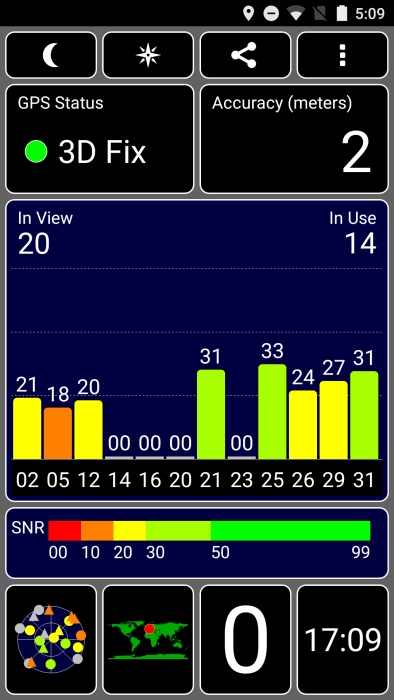 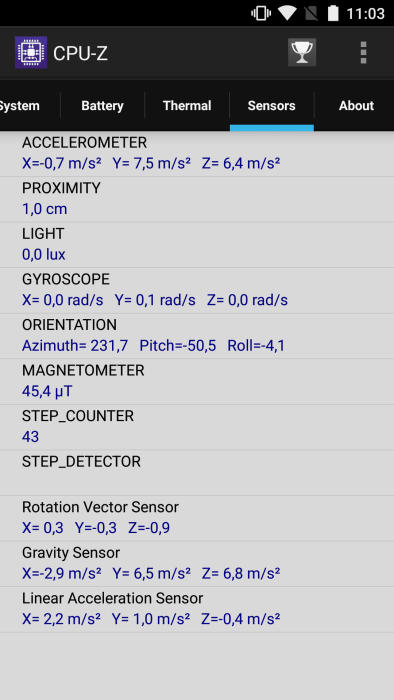 The telephony with the UMi Super convinced. All 2G, 3G and 4G standards are supported, which is why LTE in this country fully usable is. Because of the "Hybrid slots" Either the dual-SIM function or the memory extension can be used. The voice quality is good. Both my interlocutor understood me clearly, as well as I understood him very well and clearly. Also the telephony by means of Speakerphone works well. The speaker has a pleasant volume and does not sound tinny.

Auch im Wifi brought the UMi Super no problems. The transmission range is neat and the signal quality remains constant. The same applies to the transmission via Bluetooth. Dual Band WiFi (2.4GHz and 5GHz) is supported!

The UMi Super relies on one 4.000mAh batterywhich promises a long-lasting term. A Quick charge function "Pump Express Plus" is available, which allows the battery to charge with a quick charger in no time. One should note that the Battery not changed can be!

In everyday life, the UMi Super reaches one Running time of about 1 ½ days with normal use, Anyone who uses the device excessively, however, must charge the smartphone in the evening in any case. A complete charge takes about 100 minutes using the fast charge function. The measured charge capacity was far from the specified 4.000mAh. Only 3.500mAh showed me the USB multimeter.

The UMi Super combines a great display, an appealing design and a fluid Android 6.0 feeling. However, the Super Phone is not perfect. Despite the good design, the control buttons sit a bit loose in the case and create a rustle with every little movement. Even with the battery capacity, the manufacturer has unfortunately geflunkert. The specified value of 4.000mAh is not adhered to.