Home » News » News for the Samsung Galaxy Z Flip - fold the second one!

News for the Samsung Galaxy Z Flip - fold the second one!

by Philipp K10. February 2020
It seems the Galaxy S20 will not be the only novelty that Samsung will release on February 11.02.2020th, XNUMX. Samsung will likely release a cheaper alternative to the Samsung Galaxy Fold.

After Samsung with the Galaxy Fold X has already landed a big hit, the manufacturer now wants to attract even more customers with a new concept and lower prices.

According to Max Weinbach, insider and writer at XDADevelopers, the Galaxy Z Flip is to be launched on February 11.02.2020, XNUMX. Weinbach also suspects that the smartphone in the USA should be sold exclusively, but only temporarily, by AT&T.

The name of the newcomer was also unclear at the beginning. Initially, the name Galaxy Fold 2 was used. Later, however, it is suspected that it should be called Galaxy Bloom. This name was even mentioned by Samsung CEO DJ Koh.

The Leaker IceUniverse then corrected the various statements and clarified that the name Galaxy Bloom was only the project name and the smartphone on the market Galaxy Z Flip should be called. 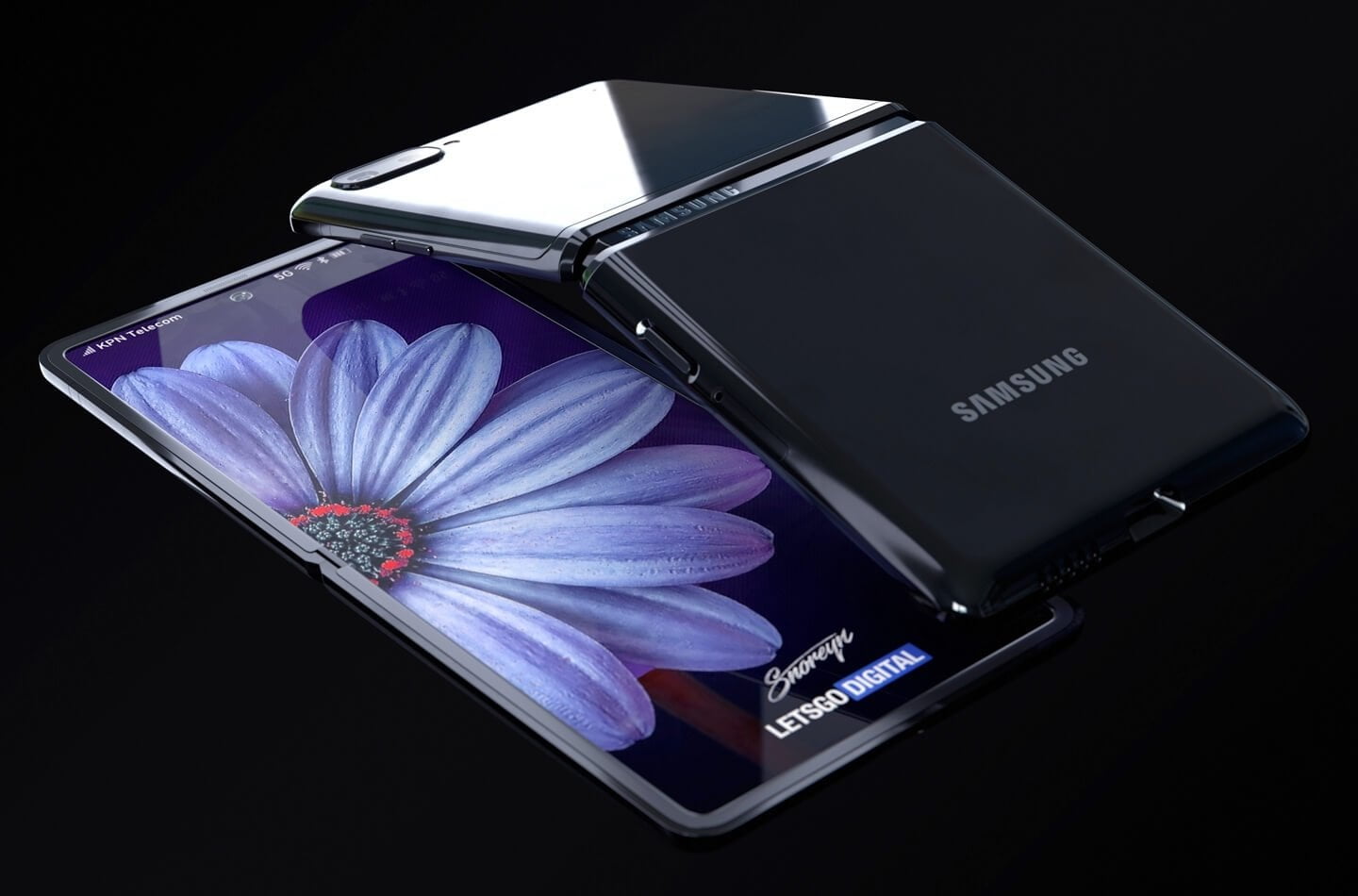 This is how the Galaxy Flip Z should probably look. Source: LetsGoDigital

The display gets interesting ...

The Samsung Galaxy Z Flip should not be unfolded vertically like the first generation. Instead, Samsung has considered unfolding the cheaper successor horizontally.

The smartphone format is already known from Motorola. With the RAZR you have already published the first smartphone with a portrait folding display. They put on a 6,2-inch screen.

The new smartphone from Samsung becomes one 6,7 inch get a large display. The display of the Galaxy Z Flip is 0,5 inches larger than that of the Motorola RAZR.

An Inifity-O-Display is expected to be installed. So an almost borderless screen that only has the cut-out for the camera.

The display should also consist of so-called "ultra thin glass", which should be foldable and also more robust than conventional displays. The glass should be between 25 and 210 microns thin.

A dual camera will probably be installed in the new housing of the Galaxy Z Flip. The main lens is said to 108 MP have, with a 5x optical zoom is to be installed. The camera should also 8K videos be able to record.

We already know this camera to share from the Galaxy S20, which is in the starting blocks. The same camera module is to be installed in the new top smartphone from Samsung.

Another special feature is the always-on display on the back of the phone. The display should be able to show the battery level, the time and notifications.

In the case of the Galaxy Flip, the Qualcomm Snapdragon 855 work. The memory is expected to be 12 GB RAM. The internal memory should be at 512 GB lie and not be expandable. Samsung will apparently release a less powerful variant. In doing so 8 GB RAM and 256 GB RAM are installed.

The smartphone should be one 3300 mAh battery get installed, which should reach the battery life of the Galaxy S10.

So far, it's all speculation. But at the latest when the Galaxy Z Flip is on the market, we know more about it.

Samsung Galaxy A9 - Smartphone with 5 cameras
look at