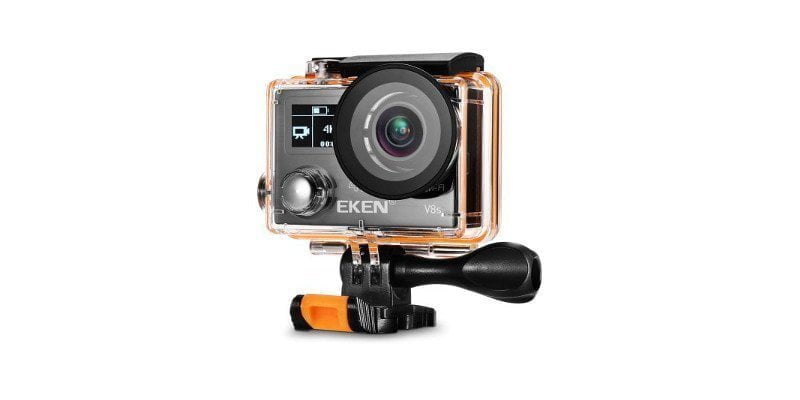 by Timo12th of June 2017
Action cam producer "EKEN" is best known for feature-rich yet affordable action cams. With the EKEN V8S, an action cam from the manufacturer is being released for the first time, capable of electronically stabilizing high-resolution 4K video recordings.
Overview
Manufacturer/Model 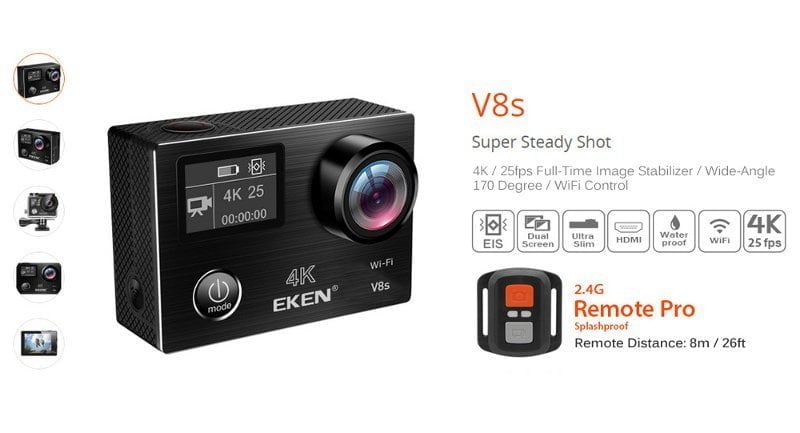 The EKEN V8S Action Cam comes with a Ambarella A12S75 image processor and a 14 Megapixel Panasonic MN34112 Image Sensor fitted. The camera is capable of using the Ambarella A12S75 in combination with the Panasonic image sensor native 4K video footage at 25 frames-per-second record. Incidentally, the A12S75 image processor is also used in many other China Action Cams. The most famous models are the Hawkeye Firefly 8S, that ThiEYE T5e and the SJCAM SJ7 Star, How to estimate the video quality of the EKEN V8S you can find in the following videos.

The EKEN V8S is able to electronically stabilize the image even with high-resolution 4K. As the electronic image stabilization (EIS) by EKEN, the manufacturer does not reveal. After all, only since the Ambarella H2 Bildrpozessor 4K image stabilization officially supported. In addition, the first users of Action Cam report that the EIS can not be deactivated at any resolution! On the back of the case is a 2 inch large LCD displayexploding with 320 x 240 pixels. An operation via touch screen is not available. In addition, there is a small LCD display on the front, which shows the status of the camera. The connections amount to one micro HDMI and Micro USB socket, as well as one Micro SD memory card slot, The possibility to connect an external microphone is not supported!

The EKEN V8S can be controlled via a 2.4G Remotehow to get it from the EKEN H9R knows, as well as there is again the possibility of control via a smartphone or tablet. For this is the Action Cam with a WiFi module (802.11 b / g / n) fitted. Operation is via the EZ iCam app, which is available for Android and iOS devices. The Accumulator owns one Capacity of 1050 mAh, The dimensions of the battery differ from the widely used "SJ4000 standard", which is why most third-party batteries can not be inserted into the EKEN V8S. One battery charge allows an approximate 4K recording time of 50 minutes. But here, too, will only be shown in the first tests, as it actually behaves with the battery life. 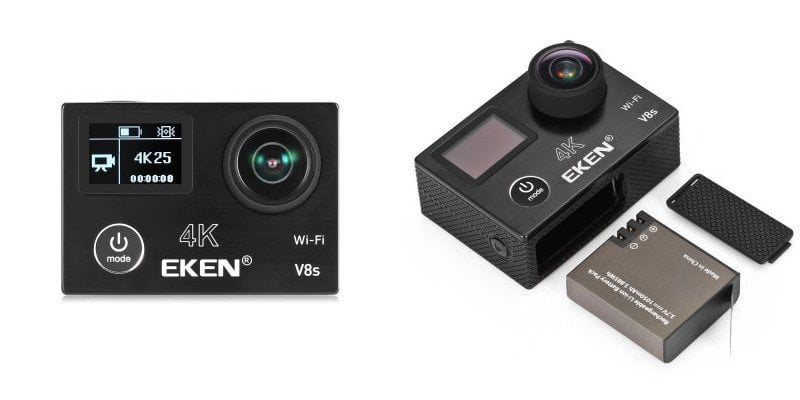 EKEN takes an unusual direction with the V8S. An action cam that takes natively in 4K and even stabilizes the image electronically sounds tempting at first. The fact that the EIS function can not be deactivated at any resolution and that the 4K EIS is officially supported only with the Ambarella H2 advises caution when buying this Action Cam!

As soon as our test copy has arrived, the detailed review follows!