by Timo29. May 2019
After a long time Cubot released a new smartphone of the X-series. The Cubot X19 is a well-equipped handheld 100 € price range. It offers an everyday use MediaTek Helio P23 processor, an 5.9 inch FHD + display and a guaranteed upgrade to Android 9 Pie.
Overview
Manufacturer/Model

For the Chinese smartphone maker "Cubot" has been rather quiet in recent months. Although some new models were released, but the success of the then box office hit these could not join. With the CUBOTA X19 The manufacturer now wants to celebrate its comeback and presents a well-equipped Smartphone from the 100 € price range.

No notch, but a lot of color!

Simple colors are from yesterday! Cubot is also very much in favor of a different colored back. "Magic Gradient" is called the color gradient, which shimmers differently depending on the light. For those who like it more plain, Cubot also has a shiny black model on offer. The dimensions of the mostly made of glass and metal Unibody are 155.06 x 74.67 x 9.55 mm. The weight is moderate 175g.

Instead of Notch Cubot sets classic display edges, The display itself is from Type IPS and solve one 5.93 inches diagonal with an 2160 1080 x pixels on. So-called 2.5D Curved Glass ensures curved edges that contribute to better looks. Other features of the panel are a Contrast ratio of 1300: 1, One 90% NTSC color space coverage and a 450 cd / m² luminance.

The dual main camera uses an unspecified one 16 Megapixel main sensor with f / 2.0 aperture and one 2 megapixel secondary sensor, Especially in the low-budget price range, Chinese manufacturers often opt for a fake second sensor, which has no effect on the recording quality, but purely for design purposes. How to arrange the second sensor remains to be seen. The main camera is supported by an LED flash. The front camera solve with 8 Megapixel and comes with a simple fixed focus therefore.

The system-on-chip is the 2017 released MediaTek Helio P23 (MT6763T), The CPUs are 8 Cortex-A53 processor cores, which in turn are subdivided into a power and energy-saving cluster (2.5 - 1.65 GHz). The GPU is an ARM Mali-G71 MP2 that allows one or the other mobile game. The system is supported by a 4GB large memory and one 64GB data store, A memory expansion by MicroSD memory card is possible waiving the second SIM slot.

Mobile, battery and others

The Cubot X19 is a Dual SIM smartphone with Cat. 7 DL / Cat. 13 UL LTE modem, Fast LTE is available on both slots (standby). The following bands are supported:

Wireless is the smartphone with 2.4 GHz and 5 GHz WiFi (802.1.1 a / b / g / n) and Bluetooth 4.2 tethered. NFC is not available as expected. The connection possibilities amount to an outdated MicroUSB jack and a 3.5 mm jack audio jack, To navigate will open GPS Compass resorted. In addition to the typical smartphone sensors (gyroscope, proximity sensor, accelerometer) is also a fingerprint sensor available. So you do not miss a notification, located above the display one Notification LED. 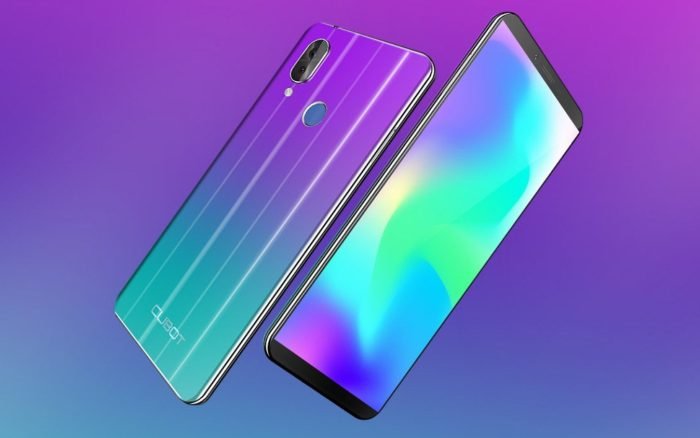 The capacity of the non-exchangeable Batteries gives Cubot 4.000 mAh on. A quick charge function is not supported. Delivered is the Cubot X19 with Android 8.1, which is largely based on Stock Android. The manufacturer has already announced an upgrade to Android 9 Pie for June 2019.

The smartphone is available at GearBest for around 107 €. Ships from early March 2019. As soon as a test copy reaches us, the detailed test report follows!

You want to know where to buy the Cubot X19? In our price comparison we list the current offers of the most popular shops. All prices are checked and updated several times a day. Should a shop appear several times, it concerns the different warehouses of the dealer.

The price is really good, but I've become cautious about these China smartphones. This 2 megapixel sensor can only be fake. No fast charging is also critical for the 4000er battery. And then also Micro-USB? Hello 2019! Then rather put on a bit and buy something decent of Xiaomi.

Hi Sebo, that's true with the MicroUSB. Since you should have installed a USB-C socket. The 2 MP sensor, I also believe that it will have no real benefit.