by Timo18. November 2015
The Chinese smartphone manufacturer Cubot should be familiar to anyone who works with Chinaphones. With the Cubot H1, the manufacturer has brought a smartphone on the market, which has not much new in terms of hardware installed on board, but clearly stands out in terms of the battery. The battery is not everything. How the Cubot H1 overall beats, I have looked closer.
Overview
Manufacturer/Model

Review of the Cubot H1 smartphone

First impression of the Cubot H1

That was delivered Cubot H1 (Link to the manufacturer) in a typical, minimalist cardboard box, as you know it from most smartphones. On the unpacked H1 was already a reasonably accurately applied screen protector. The search for a suitable protective film and the annoying sticking one has thus spared. Another protective film was also included. Especially with smartphones rather unknown manufacturer, this addition is very beneficial.

The Cubot H1 has a brushed aluminum frame that is partially covered with a thin layer of rubber. The left-mounted volume rocker as well as the on-off switch on the right are made of aluminum and optically adapt to the frame of the housing. The gold patterned back of the smartphone is removable and made of plastic.

If the back is removed, you can insert the separately supplied battery, fill the two SIM card slots or insert a micro SD card into the SD card slot.

On the upper edge of the case, the Cubot H1 has both the USB socket and the audio output. Thus, the Cubot H1 on the bottom has no connection options. The Bezel is perfectly average with 3mm. There are also three capacitive buttons underneath the display, and on the top there is a notification LED next to the loudspeaker, the front camera and the light sensor. However, this can not be changed in terms of color.

The processing of the Cubot H1 convinced and overall makes the H1 a valuable impression.

Cubot uses a 1 inch HD IPS display with a resolution of 5.5x1280 pixels for the H720. The PPI number is 267. With this resolution, individual pixels can hardly be recognized at this resolution despite a 5.5 inch display. The colors of the display are strong, the maximum brightness is also good and the display is extremely stable in viewing angles.

Cubot also saved a bit on the CPU. Here only a Mediatek MTK6735P quad-core with 1GHz was installed. In practice, this fact only makes itself felt in games and other computationally intensive apps. Despite the rather meager CPU, you can smoothly navigate through the user interface and even apps open quickly. With the Mali-T720 GPU and the 2GB RAM you can also play not too compute-intensive games smoothly. 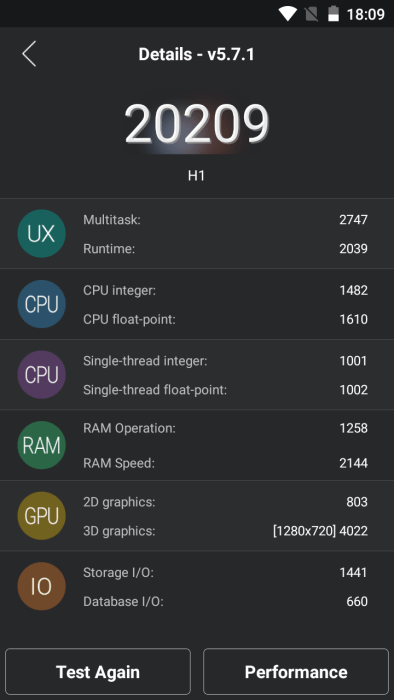 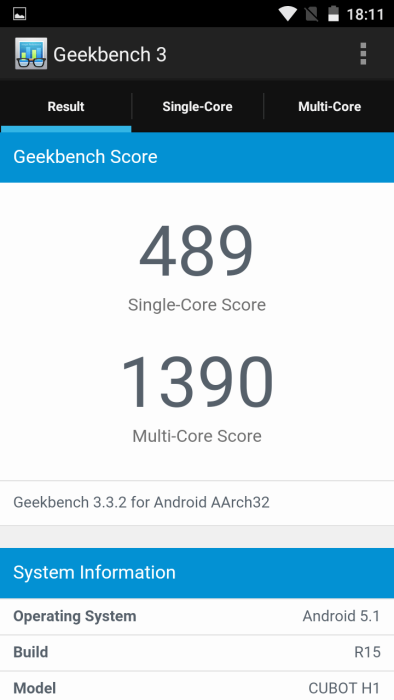 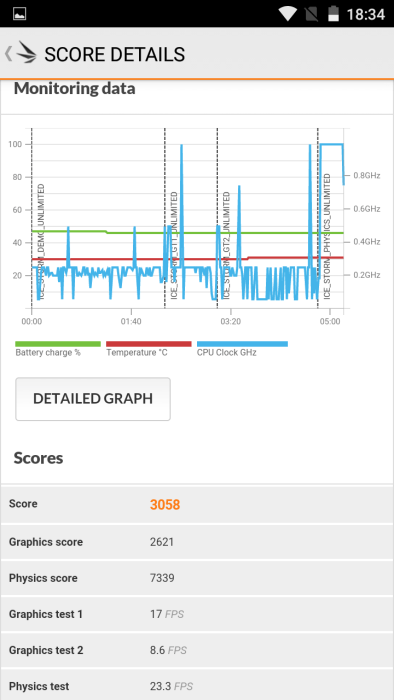 The user interface of the Cubot H1 can almost be described as stick Android. Only app icons and scattered menu items, as well as system apps have been partially adapted. Otherwise, you can experience the pure Android experience. Third-party apps were not preinstalled.

What I personally do not like so much is the lack of overview of the recently opened apps, as well as there is no app drawer. Installed apps land directly in the main menu and can only be moved by creating additional pages. A real app drawer is not there by default. However, if you are used to MIUI from Xiaomi, you will be served well with the Cubot user interface.

In the settings there are also smaller extensions. So you can regulate which SIM card should be responsible for the mobile data traffic, also you can, for example, the smartphone on a fixed schedule on or off.

Otherwise, the Android 5.1 Lollipop used here is really "stock", the menu is fast and the system is stable.

The two cameras of the Cubot H1 solve with 13 megapixel (rear camera) and 8 megapixel (front camera) on. Unfortunately, nothing is known about the image sensor used here. The Camera app uses a slightly enhanced MediaTek camera app. Functions like the panorama mode or the HDR function also offers this app.

The picture quality is neat in good lighting conditions. Only a slight image noise is noted. The colors are also good and have a lively effect. There is also an autofocus, which is not the fastest, but works well in itself.

In low light conditions, however, the pictures are also significantly worse. The picture noise is clearly noticeable here. The camera also reacts a bit slower. What I also do not like are the slightly washed-out colors that the Cubot H1 shoots at night. With active flash, however, night shots are again quite useful.

The reception with the Cubot H1 is good. So far, I have not been able to detect any breaks in the network quality. The voice quality is also neat in both directions. The dual SIM function also worked right away. It should also be noted that the Cubot H1 is compatible with the LTE Band 20. Accordingly, one can use it easily in the German LTE network.

Concerning the WLAN the H1 understands only the 2.4GHz band. For the Bluetooth standard, Cubot uses Bluetooth 4.0. Both the Bluetooth and the Wi-Fi connection were stable in a test inside the apartment and the range average.

The GPS is good too. After a short test drive through town and country, I could not find any major problems. The signal was so far constant and accurate to a few meters. Only in the city center, the position determination was somewhat inaccurate, which is not unusual because of the urban canyons. Thanks to the integrated e-compass, the Cubot H1 is also suitable as "pedestrian navigation".

The battery is the highlight of the smartphone. Cubot has a built-in 5200mAh battery, which has almost twice the capacity of conventional smartphone batteries. The included OTG adapter can even charge another smartphone. The Cubot H1 can be called a "power bank".

The SOT (Screen On Time) is phenomenal. Even after about 12 hours my H1 still had 25% battery. Thus, the Cubot H1 can easily be used for days. Even in standby, the H1 is economical, so that the battery hardly discharges.

Mediocre camera
SoC not up to date

The Cubot H1 has smaller quirks and no high-end hardware, but overall it leaves a good impression. Especially with the battery, this smartphone really blew me away. Who puts a lot of emphasis on a huge battery life and can also handle deductions with respect to the camera, which still shoots in good lighting conditions passable images, which is excellently served with the Cubot H1.