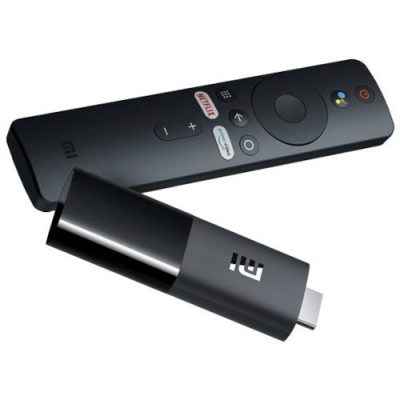 Xiaomi has arrived on the European market and presented many new products in mid-July 2020 as part of the “Xiaomi Ecosystem Product Launch”. The Chinese electronics giant has introduced the Xiaomi Mi TV Stick especially for the western market, which competes in the price range up to 40 euros. 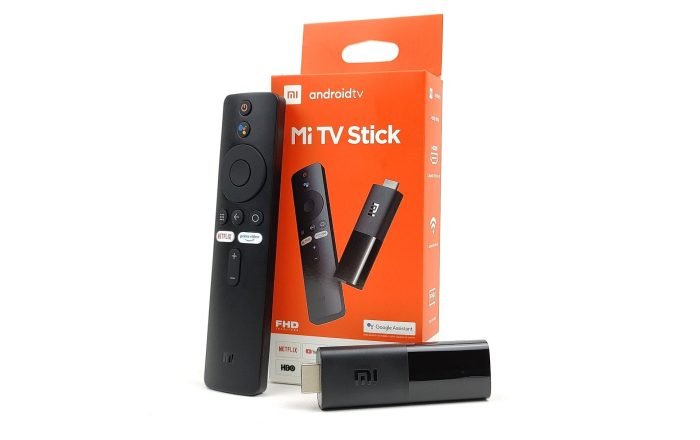 The design of a streaming stick usually doesn't play a big role, because after unpacking it usually disappears right behind the television. In the case of the Xiaomi TV Stick, however, we have to go into more detail about the design. Especially when it comes to the case.

At 15 millimeters, the Xiaomi Mi TV Stick is comparatively thick. At the same time, the HDMI connector is a bit short at 6 millimeters. Connector lengths of 8 millimeters are common. Problems can arise depending on how close the TV's HDMI inputs are to one another or how far the connections protrude into the housing. For the test, the stick was connected to a Samsung and a Philips television. On the Philips TV, the HDMI connections were so close to the edge of the housing that the stick only fit in the middle entrance. On the Samsung TV, the stick did not protrude deep enough into the housing that there were contact problems. 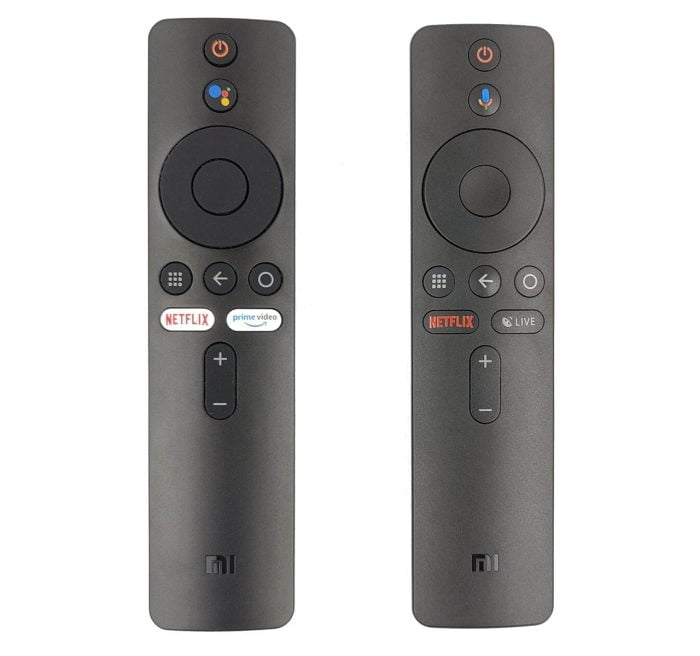 Incidentally, the HDMI-CEC compatibility also enables the stick to be controlled with the TV remote control. However, this also means that the special or quick access buttons (Netflix, Prime & Google Assistant) that cannot be transferred to the TV remote control are lost.

The stick is based on an Amlogic S805Y System-on-Chip (SoC), which was specially designed for inexpensive streaming sticks. Although the S805Y SoC is one of the newer Amlogic chip solutions, it is largely based on the 5-year-old Amlogic S905 series. The CPU is made up of 4 Cortex-A53 processor cores with a maximum clock rate of 1.5 GHz. A Mali-450 GPU is responsible for graphic calculations.

The memory of the Xiaomi TV Stick is divided into a 1GB main memory and an 8GB data memory, almost half of which is already occupied by the system. USB-OTG for connecting external data carriers is not supported. Dual-AC WLAN (2.4 / 5 GHz) and Bluetooth 4.2 are available for wireless connections.

The Xiaomi TV Stick is quick to set up. The commissioning does not differ from other Android TV products. The remote control must be paired at the beginning. Then choose the language or region and follow the next steps. 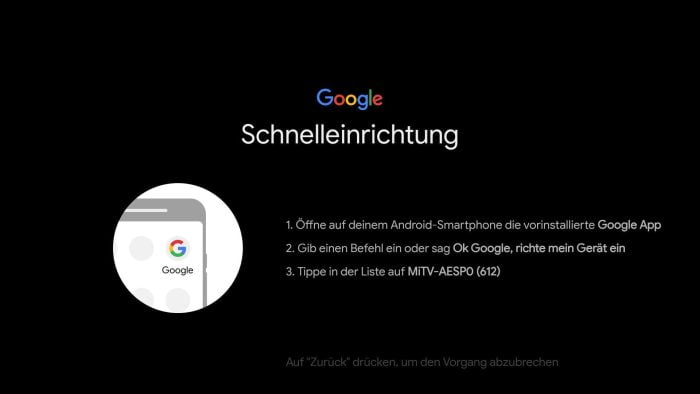 The “Google quick setup” can be used for a particularly simple connection setup. The stick connects to the smartphone and allows setup directly from the smartphone. Unfortunately, the Google quick setup did not work in the test. Despite the connection, the stick was not recognized by the Google app. Instead, the WLAN password had to be entered manually using the remote control. In the further course of the setup, you can still make an app selection, set up the voice assistant and you will receive initial information about the Android TV functions. 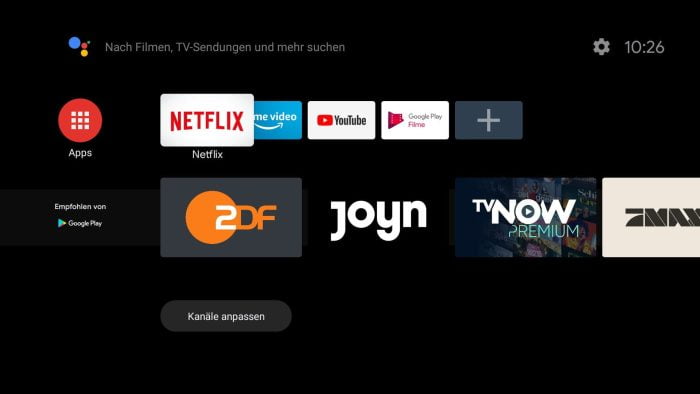 After setting up, you end up in the tidy Android TV 9 user interface. Whether and when the Xiaomi Mi TV Stick will be provided with an update to Android TV 11 is not yet known - as of October 2020.

The user interface is clearly structured according to tiles. Apps can be added to the quick selection and sorted as required. Favorites can be displayed on the home screen. A preview allows you to quickly switch to personalized content. 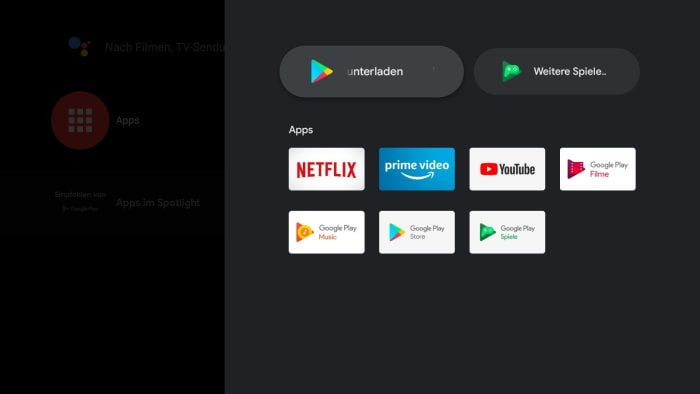 The user interface did not always respond smoothly in the practical test. When switching between the apps, loading times can be longer and the tiles are not always set up straight away. Occasionally stuttering can occur when navigating through the user interface. Despite these performance weaknesses, the Mi TV Stick still delivers a good overall Android TV picture.

One reason to choose Android TV is the Google Play Store. This is comparable to the Play Store on Android smartphones and enables the installation of additional apps. The selection is wide and pretty much every streaming provider (e.g. Netflix, Disney Plus, Prime Video, DAZN and others) is represented with a suitable app. In addition, numerous media players (e.g. Kodi, Plex, VLC), widgets and tools are available for download. 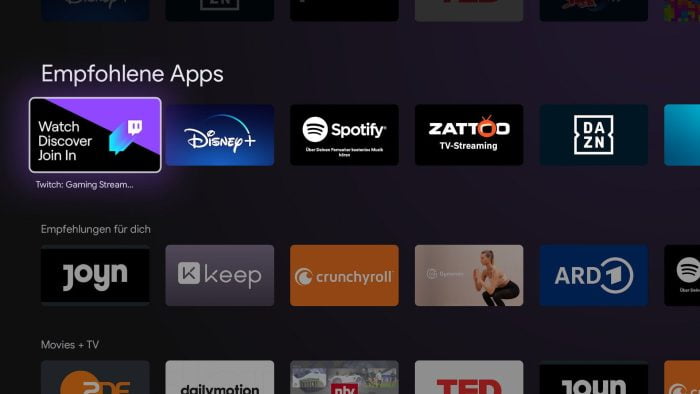 If you want to use the stick with Sky Go, look into the tube. The app is not available in the Play Store. Sky Go can be transferred from the PC web browser to the stick via Google Cast via a detour.

The Xiaomi Mi TV Stick is Google Cast compatible and functionally comparable to a Google Chromecast. Videos, pictures and music can be streamed from smartphone, tablet or PC to the TV with just one click. 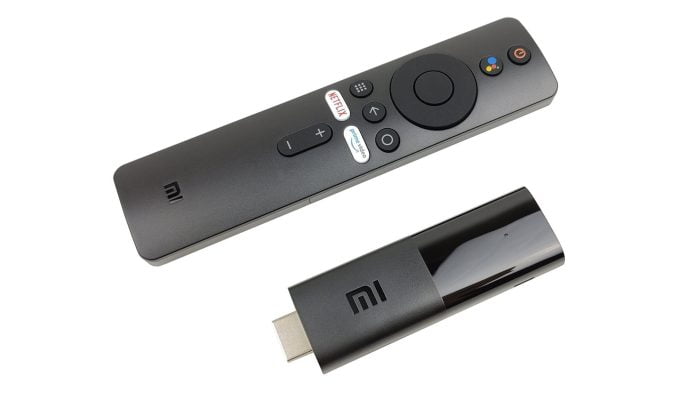 Strictly speaking, the Xiaomi TV Stick is a stripped down one Xiaomi Mi Box S. Instead of high-resolution 4K video playback, the stick is limited to Full HD (1080p60). 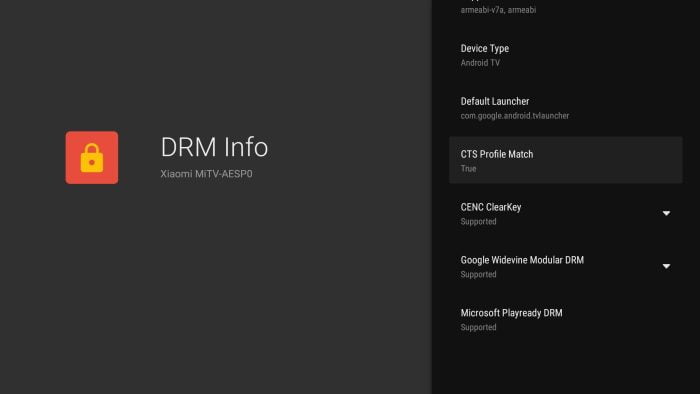 The playback was consistently smooth in the test. It doesn't matter whether you stream via a streaming provider or transfer a video via Google Cast. The video formats RM, MOV, VOB, AVI, MKV, TS and MP4, as well as the video codecs VP9-10, H.265, H.264, VC-1, MPEG1 / 2/4 and Real8 / 9/10 are supported. The playback of high dynamic range (HDR) content was not (yet) possible at the time of the test, although the "color depth" item is already stored in the settings. 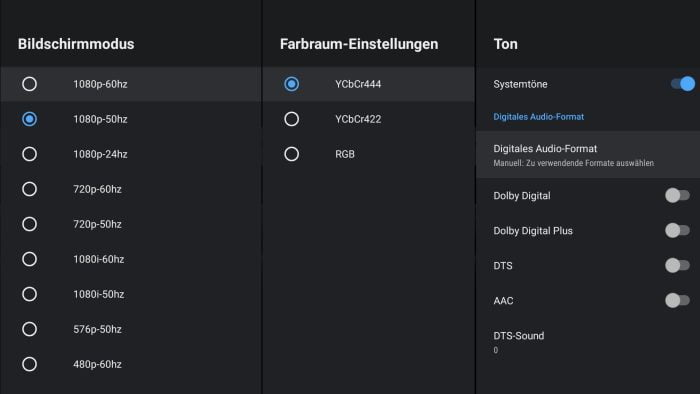 Kodi can be installed executable on the stick. However, since no external data carrier can be connected, the only option is to stream wirelessly via the WLAN. However, an extensive media library quickly makes the stick sweat. The WLAN speeds achieved are completely sufficient for 1080p60 transmissions.

Multi-channel audio can be looped through as PCM or source-coded in the form of Dolby Digital, Dolby Digital Plus, DTS and AAC. That also works satisfactorily. However, HD audio is not supported.

There is no clear winner in the comparison between the Xiaomi Mi TV Stick and the Amazon Fire TV Stick. Both streaming solutions score points in different places. The Fire TV Stick is technically somewhat more up-to-date. Instead of Bluetooth 4.2, the Fire TV Stick already offers Bluetooth 5.0, HDR10 + is supported and an external data carrier can be connected with a suitable USB-OTG adapter.

On the software side, Android TV offers more options than Fire OS. A big plus point for Android TV is the Google Cast function, with which apps, films and music can be transferred to the TV with just one click. Again, the strong Prime ecosystem speaks for Fire OS. For example, Amazon's Alexa voice assistant is a step ahead of the Google Assistant.

Would you like to know where you can buy the Xiaomi Mi TV Stick? In our price comparison we list the current offers from the most popular shops. All prices are checked and updated several times a day. If a shop appears several times, it is the dealer's various warehouses.

Is the Xiaomi Mi TV Stick a recommended streaming solution? Absolutely! If you want to turn your old FHD TV into a Smart TV, Xiaomi is in good hands. The Android TV user interface supports most streaming providers and offers an easy way to transfer films, music and apps to the stick via Google Cast.

Nevertheless, the Xiaomi TV Stick remains an inexpensive entry-level solution. Users with higher demands - be it because of extensive media libraries, 4K streaming or games - the stick's performance does not do justice. Here we recommend going towards the TV box. 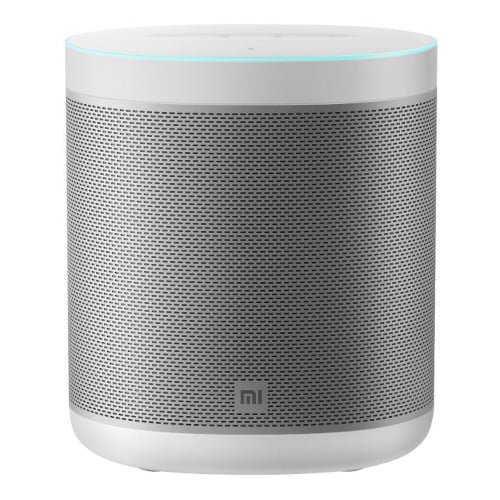 In addition to listening to music, just ask about the weather or check the news - smart speakers with integrated voice assistants make it possible. Downtown... 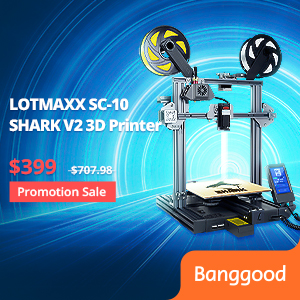 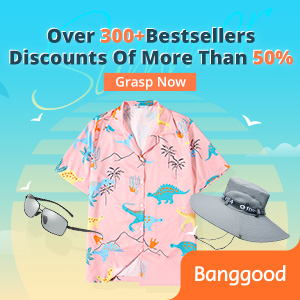