Xiaomi Mi Band 5 Global - These are the new functions!

by Timo11. November 2020
The Xiaomi Mi Band 5 is here! Xiaomi has revised the world's popular fitness bracelet and brought it up to date technically. Among other things, the display has grown to 1.1 inches, the sensors have been improved and new economy modes have been added. There are 7 innovations in detail.
Overview
Manufacturer/Model

At Aliexpress there is Xiaomi Mi Band 5 Global in the Singles Day offer for only 19,60 Euros. To get the price you just have to activate the discount code on the product page and enter our exclusive code in the shopping cart.

With this Aliexpress discount code you can buy the Mi Band 5 Global Version reduced for only 19,60 euros.
AUTHEN1111
SHOW COUPON
TO DEAL
5€ Discount
Valid until 12.11

With the Firmware update V1.0.1.31 the Chinese Mi Band 5 can now be used in German. Simply carry out the update via the MiFit app and the function in the language settings "Follow phone language" choose.

The Xiaomi Mi Band 5 Global was officially introduced. In contrast to the Chinese Mi Band 5, which was released in two versions, only that became for the global market standard model presented. This dispenses with NFC and voice control.

The first online shops have already added the Mi Band 5 Global to their range. The price is 39,99 euros, a Price Comparison can be found at the end of the post. 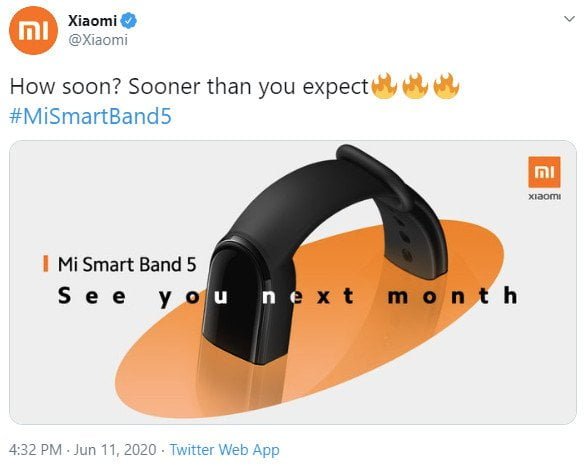 Xiaomi has the Mi Band 5 larger display lost. Compared to the previous model, the Xiaomi Mi Band 4, the display is from 0.95 inches 1.1 inch grown. The resolution is 126 294 x pixelswhat is taking into account the display diagonal of a sharp display of 290 DPI requirements.

The display type is AMOLED, which scores with a high contrast, strong colors (16 bit color depth) and an extremely low energy consumption. It is remarkable and extremely important for a fitness bracelet 450 nit luminance of the Mi Band 5. This means that the display remains legible even outdoors, especially in strong light.

Until shortly before the release, it was still assumed that the fitness bracelet would have NFC on board as standard. It is now known that between NFC model and non-NFC model is distinguished. In the following picture, Xiaomi clearly shows the possibilities that the NFC model offers. No matter whether mobile payment, ticket in public transport or as a door opener. At least in China, the NFC model is a useful everyday companion.

However, the question arises to what extent the NFC will also be usable in this country. Previously released Xiaomi wearables with NFC were only of limited use outside of China. The chances of that one Xiaomi Mi Band 5 NFC Global also with western payment services, such as Google Pay, will be usable, are good. Xiaomi has now arrived in Europe and will most likely also serve the European market with the fitness tracker. When this is to be expected is still in the stars.

The Xiaomi Mi Band 5 is the first Mi Band with magnetic charging adapter. In the predecessor models, the tracking capsule had to be removed from the conveyor before each loading process. With the Mi Band 5 the tracking unit can stay in the band. The contact surface for the magnetic charger is on the underside. The is loaded 125 mAh battery in less than 2 hours. The running time gives Xiaomi with more than 14 days at. Despite the new charging standard, the tracking unit is still waterproof up to 50 meters.

The sensors of the fitness armband have been brought up to date. Sensors such as the pedometer or the heart rate sensor now provide even more precise values. The intelligent heart rate monitoring measures the pulse day and night and warns of anomalies. Unfortunately, an SpO2 sensor did not make it onto the bracelet.

Xiaomi has now taken over what other manufacturers have integrated into their wearables for the Mi Band 5. The fitness bracelet has one Menstrual calendar integrated, which helps women to document their cycle.

A GPS module is not installed in the fitness bracelet. The position data of the smartphone is used for an exact position determination.

The fitness bracelet is also a Fernauslöser für die Camera of the connected smartphone. A preview image is not transmitted. The support of language assistants. The NFC model has an additional microphone for this. The Xiao AI Assistant is supported in China. For the global market, the choice is most likely to stand out Amazon Alexa.

Redmi fitness wristband with color display is coming!
look at