Huawei P30 (Pro) - All (Advance) Info about the Smartphone!

by Timo15. March 2019
The new Huawei P30 smartphone series is in the starting blocks. On the 26. Huawei will officially introduce the new models in March. In the foreground is once again the main camera with high-resolution sensors and profound camera AI. All previously published preliminary information has been compiled in the following article.

Recent leaks indicate that both the Huawei P30 Pro and the P30 have one OLED panel be equipped. Noteworthy here is the screen size of the Huawei P30 Pro, which beats with 6.47 inch. Curved display edges complete this 2340 x 1080 pixels resolution display visible and make it appear almost borderless. The standard model, however, gets a more compact 6.1 inch display, also with 2340 x 1080 pixel resolution. Both models have one Drop Notch together, which surrounds the front camera. 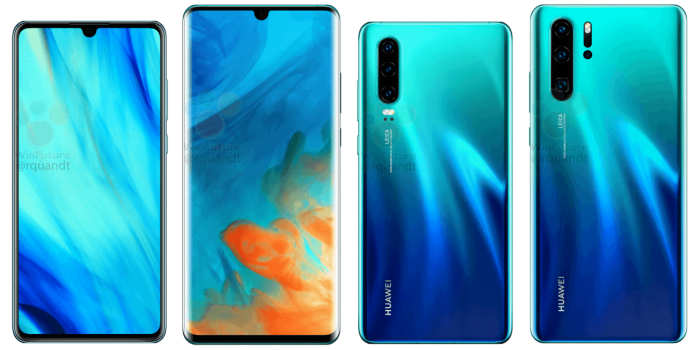 Striking is the invisible front speaker of the P30 Pro, most likely for a "Sound on display" solution speaks. The sound is generated by a vibrating, piezoelectric component. On In-display fingerprint scanner provides more security when unlocking the smartphone. Unlocking by face recognition takes over the predecessor no 3D sensor, but the 32 megapixel front camera.

Main camera with up to 4 sensors

On the back, the Huawei P30 presents a main camera with extensive sensors. On 40 Megapixel main sensor with f / 1.6 aperture and optical image stabilization ensures pin-sharp shots. On 20 megapixel sensor with wide angle and f / 2.2 Aperture captures a particularly wide picture detail and is particularly suitable for group shots and panoramic shots. The third sensor in the league is a 8 Megapixel Sensor. This allows lossless zooming with up to 7.8 optical magnification and maximum 10-fold hybrid zoom, The standard model in turn uses an 40 megapixel main sensor with f / 1.8 aperture but without image stabilization, an 16 megapixel wide-angle sensor and an 8 megapixel hybrid sensor with f / 2.4 aperture.

Both devices are with one Laser autofocus and two-color LED flash fitted. A so-called Time-of-flight sensor, which only the pro model uses, captures depth data. From the collected data, a three-dimensional spatial image is generated in real time, which is particularly useful in AR applications. The front camera resolves with 32 megapixels.

Fast on the road with the Kirin 980 SoC

Inside, that works Kirin 980 system-on-chip, which among other things also the Huawei Mate 20 Series used. The SoC is manufactured in the 7nm process and uses a unique Three tier architecture, This subdivides the processor into two particularly fast and two highly efficient Cortex-A76 cores, as well as four Cortex A55 cores. For a graphical performance increase provides the Mali G76 GPU. The Dual-NPU The SoC is responsible for the AI ​​tasks of the smartphone. Other hardware features are the support of Cat21 LTE, dual-AC WiFi (802.11ac) and Bluetooth 5.0.

The Huawei P30 Pro has one 4200 mAh batterythat should bring the user safely over the day. A 40 watt quick charge function Charges the battery within a short time. The battery of the standard model is slightly smaller with only 3650 mAh. NFC is available. The operating system is EMUI 9.1, which is on Android 9 Pie based. A IP68 certification can expect a water and dust resistance.

The Huawei P30 Series will be on 26. March presented in Paris. For the prices there is no information yet.