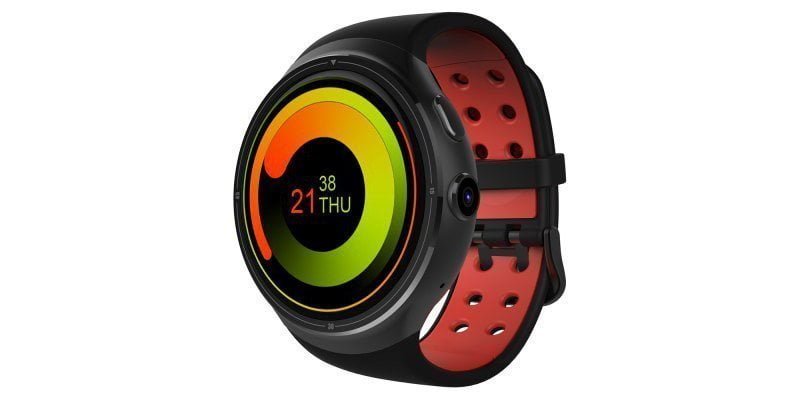 by Timo26. October 2018
After the extremely successful "Zeblaze Blitz", the smartwatch manufacturer "Zeblaze" is releasing the "Zeblaze THOR", a sporty smartwatch with a telephony function, AMOLED display and other interesting features. What features these are and how this smart wearable should be assessed, more on this in this article.
Overview
Manufacturer/Model

Already on the look of the Zeblaze THOR one recognizes that this Smartwatch above all at the athletic user directed. Compared to the predecessor, the Zeblaze Blitz is the overall design rounder and less edgy. The size adjustable bracelet consists breathable silicone and is by means of a Dornschließe closed. The watch case is made up for the most part Stainless Steel and measures 13 mm in thickness and 45 mm in diameter.

The circular display is of the type Super AMOLED and has one Diagonal of 1.4 inches, The resolution is included 400 400 x pixels, which achieves a dot density of 326 DPI. Individual pixels are no longer recognizable. Another advantage of an AMOLED panel is the especially rich colors, Due to the fact that the AMOLED display does not need any backlighting and every pixel lights up as needed, a special feature is possible precise black level be generated. The pixels are simply turned off in this case. Another advantage over a conventional LCD is the lower power consumption in high black displays. The display is protected by Corning Gorilla Glass 3which has already proven to be particularly impact-resistant and scratch-resistant in other devices.

On the hardware side, the Zeblaze THOR is similar to a smartphone. The processor comes from MediaTek and is named "MTK6580", This processor has been used on the previous model and is a widely used system-on-chip in China smartwatches. The clock rate of the Quad-core processor is 1.4 GHz, In addition, the system is with a 1GB large memory and a 16GB internal memory fitted. A memory expansion option using an SD memory card is not supported.

Even one SIM card can be inserted, whereby the Smartwatch in the 2G and 3G mobile network make phone calls. A microphone and a loudspeaker have the Zeblaze THOR firmly installed. Another feature is the WiFi Function. Connected to the Wi-Fi, you can browse the web like a smartphone and even apps on the Google Play Store download. The operating system is based on Android 5.1, so there are hardly any limits. If you want to navigate with the watch on your wrist, the Zeblaze Smartwatch offers an integrated GPS Module. Google Maps is already pre-installed and can be used extensively.

For sporting activities the Zeblaze has THOR several fitness apps preinstalled. In addition to one Pedometer there is also one Heart Rate Monitor, which measures the heart rate by means of a photodiode and a green LED. A total of 20 applications from different categories are preinstalled. Also different Watch Faces are already on the watch and can be changed via a quick selection. Alternatively, you can also load your own watchfaces directly on the clock. A rather unusual feature for smartwatches is a small one 2 megapixel camera on the edge of the case. This allows not only interpolated 5 megapixel images but also the recording of videos. The battery has a capacity of 350 mAh. Comparable systems have shown that one battery charge, depending on the intensity of use, is sufficient for one day of battery life.

Amazfit GTS 2 - All information about the Smartwatch
look at

Amazfit GTR 2 - All information about the Smartwatch
look at

hi 've got a question and that's it: man hears that the connection always repudiates weider who connects smartwatches via BT and that without the right app

I'm looking for a smartwatch that stays permanently connected to my mobile phone “le max 2” and that I can use this phone to send messages such as Whatsapp, Threema, etc.

is the zeblaze thor something for me!? is there an app for the BT connection such as Android wear !? that the connection remains consistent

Hi Robin, the disconnect is mostly due to the power saving features of the watch / connected smartphone. For example, I currently use the Huami Amazfit Pace Smartwatch (https://www.techreviewer.de/huami-amazfit-pace-test/) and with the right options I have no problems with disconnects. Usually, this also supports every clock.

Hi, I would be very interested in whether it is already foreseeable when you have the good piece or accordingly the test report follows. I am still quite undecided whether I can buy the Thor without hesitation or not.

according to several tests with this part, the software is the obstacle to buying - “wiiwear”
The battery should also be underground - 350 mAh, which also saved 🙁
for a Kamrera that no one needs
All in all, it is not worthy of any 100 Euronen

How can I change my own waxfaces?