Realme today presented two new mid-range smartphones for the European market. The Realme 7 Pro is based on a Snapdragon 720G processor, offers a high-resolution Super AMOLED display and can be quickly charged with up to 65 watts. The even cheaper Realme 7 is based on a MediaTek Helio G95 processor. Instead of AMOLED, there is an IPS panel and fast charging is possible with 35 watts.

All other differences and information about the two Realme 7 smartphones can be found in the article.

We have it now Realme 7 and Realme 7 Pro for one Review receive. You will then find a detailed test of both devices here. If you have any questions about the smartphones, please feel free to ask them in the comments.

The Realme 7 Pro is now over Amazon and on realme.com/eu can be pre-ordered. Realme wants to score not only with the hardware, but also with the support. Instead of a 2-year guarantee, Realme provides 3 years warranty on the smartphone. So that you don't sit on dry land during the repair, there is for A free replacement device for 2 months. 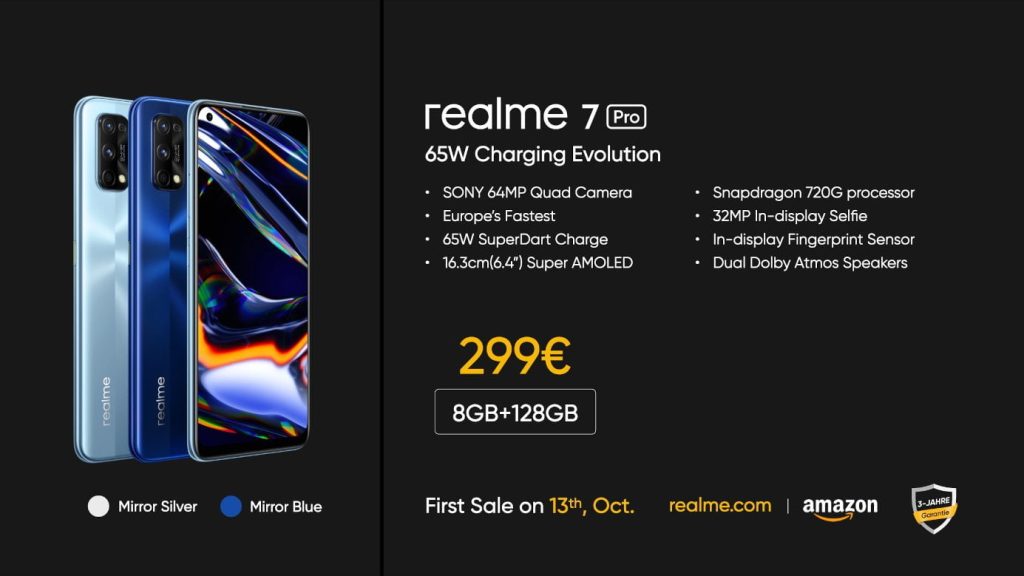 Let's take a closer look at the Realme 7 Pro. The smartphone is in the two colors "Mirror Blue" and "Mirror Silver", as well as the custom color "Sun Kissed Leather" (India only) available. The housing of the 160.9 x 74.3 x 8.7 mm big and 182g heavy smartphones is characterized by a matt, shimmering surface, the Realme itself as "Entrance to a Mirror Space" bezeichnet. 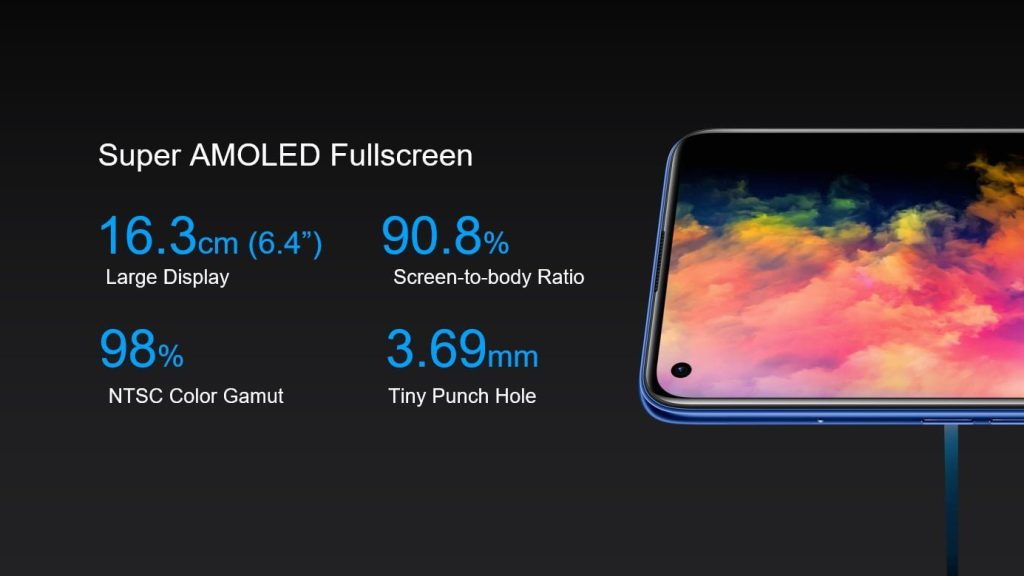 The front adorns 6.4 Inch Super AMOLED Display with 2400 1080 x pixels Resolution. The Screen-to-body ratio reached 90.8 Prozentso that wide display bezels hardly matter. Of the NTSC color space becomes 98 Prozent covered. A particularly fast one refresh rate the panel does not offer. This is 60 frames per second - middle class. The used one offers protection from scratches and falls Corning Gorilla Glass 5 Display glass. There is a below the display In-display fingerprint sensor.

The built-in processor does not differ from the previous model, the Realme 6 Pro. Also installed is a Qualcomm Snapdragon 720G system-on-chipwhich, among other things, combines an Octa Core CPU and an Adreno 618 GPU. The im 8nm procedure manufactured chip was presented in spring 2019. The cores of the CPU are divided into two fast Cortex-A76 cores with a maximum clock rate of 2.3 GHz and six Cortex-A55 energy saving coresthat clock at a reduced clock rate of 1.8 GHz. Stand by it 8 GB LPDDR4X memory and an 128GB UFS2.1 data store to the side. Of the Triple SIM slot enables two SIM cards and a microSD memory card to be used at the same time. 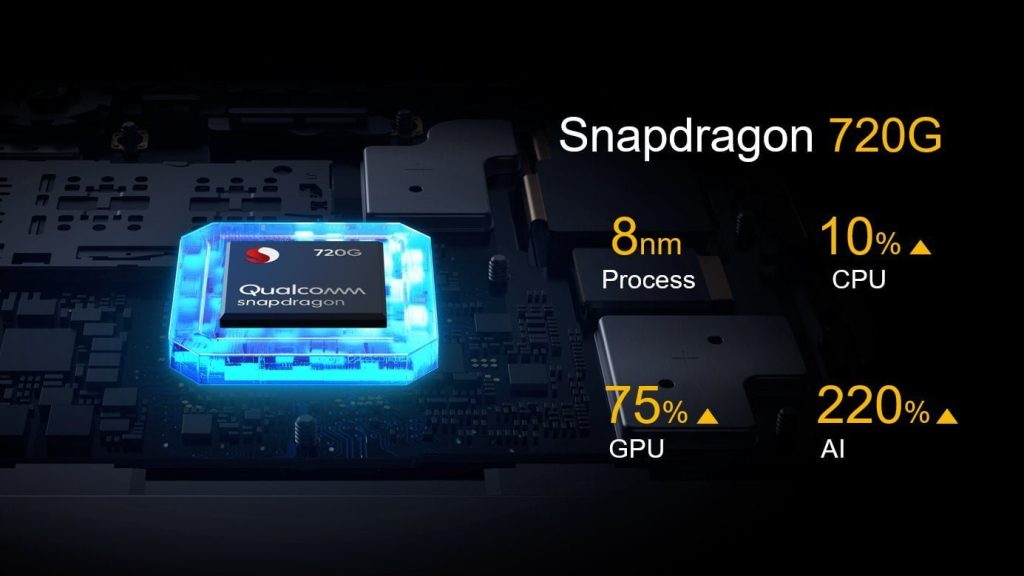 Other features of the system-on-chip are a X15 LTE modem, which gets along with the usual mobile radio frequencies and bands in this country, the support of Dual AC WiFi, as Bluetooth 5.1. An NFC module is not installed. This ensures a powerful sound Stereo Speaker System with Dolby Atmos and Hi-Res audio support. If you want to enjoy music or films through wired headphones, you can choose between USB-C and 3.5 mm jack.

In the previous models, Realme relied entirely on sensors from Samsung. Instead, the Realme 7 Pro opted for a 64 megapixel main camera from Sony. More precisely is a 64 Megapixel Sony IMX682 Built-in image sensor, the so-called Pixel binning 2 × 2 adjacent pixels are combined and the recording quality is further improved.

The other sensors are divided into one Ultra wide angle camera with 119 degrees wide angle, one B&W sensor, which ensures a clean bokeh effect for portraits, as well as a Macro camera with 4cm minimum focus distance. The front camera solve with 32 Megapixel and is embedded in the display in a “punch-hole” style. 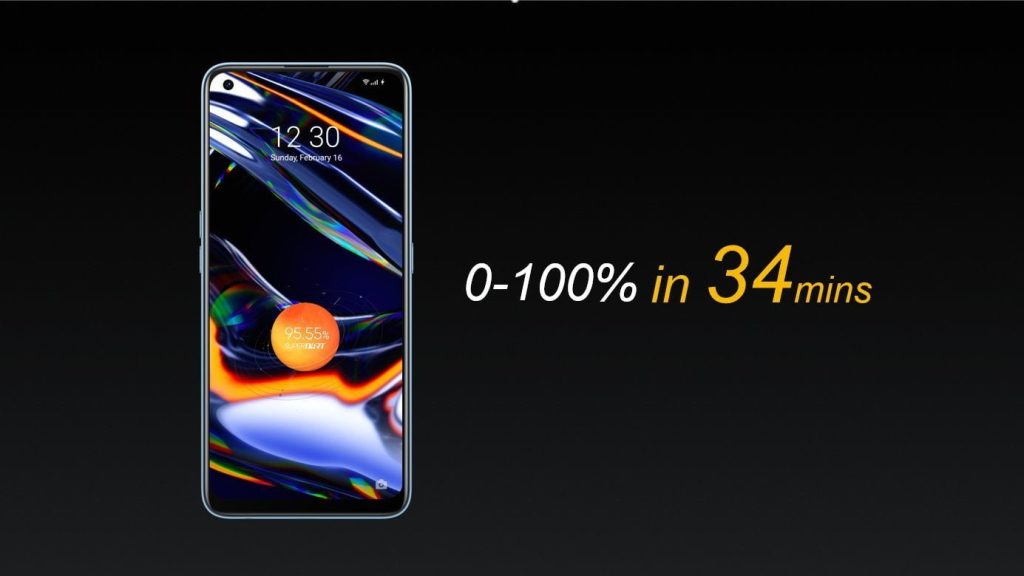 The battery has a capacity of 4500 mAh. A special feature of the Realme 7 Pro is that 65 watt SuperDart fast charging technologythat charges the smartphone to 15 percent in just 50 minutes and to 34 percent in 100 minutes. Contactless charging is not supported. 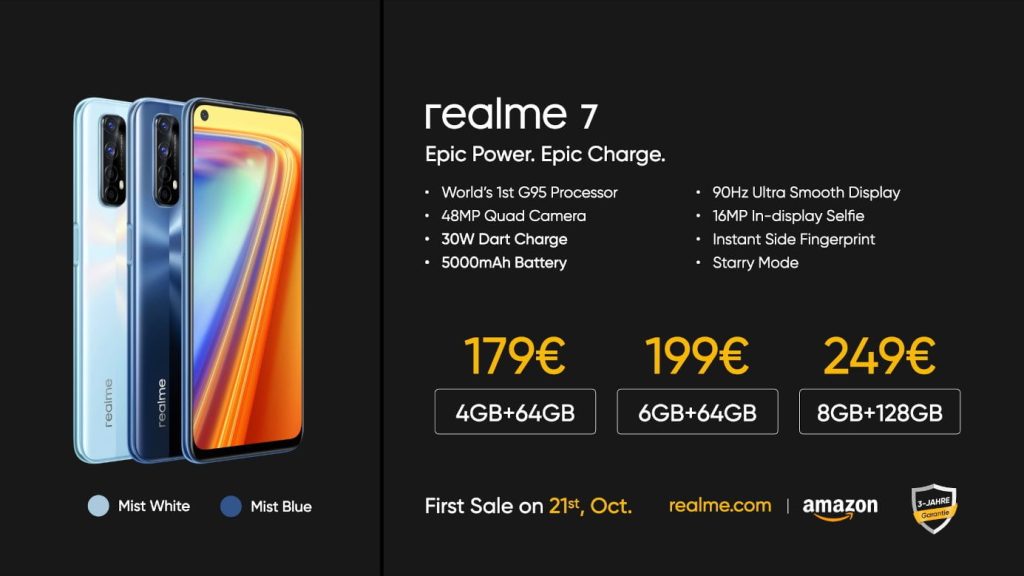 The Realme 7 is the cheaper smartphone in the new Realme 7 series. There are minor differences in the design. So is the Realme 7 by measure 162.3 x 75.4 x 9.4 mm and a weight of 196.5g slightly larger and heavier than the Pro model. The smartphone is available in the colors “Mist White” and “Mist Blue”.

Instead of an AMOLED display, one has here 6.5 inch FHD + IPS panel (2400 x 1080 pixels) decided. The ensures a particularly smooth display 90 Hz refresh ratethat makes the smartphone especially interesting for gamers. The Screen-to-body ratio reaches 90.5 percent. The screen protector is also of the Corning Gorilla Glass type. Of the Fingerprint scanner is located on the side of the housing. 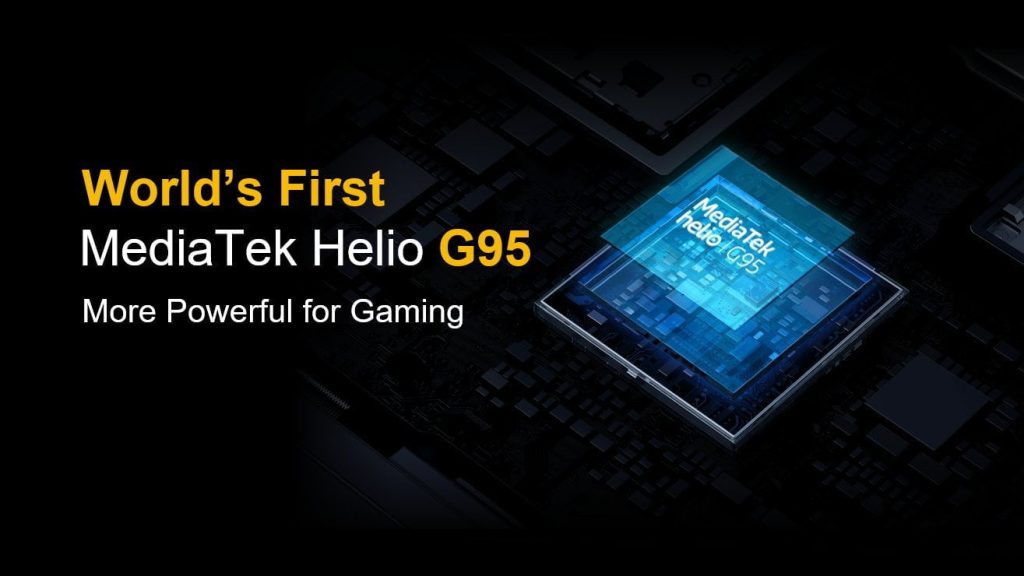 In contrast to the Realme 7 Pro, the Realme 7 is available in three memory variants. Optionally stand 4GB, 6GB or 8GB LPDDR4X memory and 64GB or 128GB UFS2.1 data store to the side. Of the Triple SIM slot can be equipped with two SIM cards and a microSD memory card.

Another difference to the Realme 7 Pro is the camera. The Realme 7 uses one 48 Megapixel main sensor with f / 1.8 aperture. The rest of the sensors are identical to the Pro model. We also have one with the Realme 7 Ultra wide angle camera with 119 degrees wide angle, one B&W sensor and Marko camera installed. The front camera sensor is a Sony IMX 471, which has a resolution of 16 megapixels.

The battery with 5000 mAh Thanks to the Dart Charge, capacity can be increased to 30 Watt fast charging. A full 0-100 percent charge takes approximately 75 minutes.