by Timo1. December 2015
Smartwatches are in full swing with 2015 and so the market is literally flooded. Even the big manufacturers are involved, but at prices from 180 € upwards you should consider 2x, if you really need such a gadget. The UWatch U8, however, already exists from about 20 €. What you get offered for this price, I have looked closer.
Overview
Manufacturer/Model

Review of UWatch U8 Smartwatch

Overview of UWatch U8

Was delivered the UWatch U8 in a well-padded cardboard box. Included in the delivery were also a USB data or charging cable, a small tool with which you can remove the bracelet of the clock, as well as a manual in English and Chinese. A screen protector was already on the display of the U8.

The UWatch U8 is well-made for the low price. The watch case (40x47x9.9mm) is made of plastic, whereas the back is made of a thin metal plate. On the side of the case are a power button, the small micro USB port hiding behind a rubber cap, and a small speaker and a microphone. The back can not be removed, which means you can not replace the 230mAh battery. The UWatch U8 does not have a SIM card slot!

The black silicone bracelet makes a solid impression and is also adjustable in size. Incidentally, I could not notice an unpleasant rubber smell.

The touch display of the UWatch U8 is 1.44 inches tall and has a resolution of 128x128 pixels. There are 3 capacitive buttons below the display, which facilitate menu navigation. Unfortunately, the screen protector that was already glued on was not carefully glued on, which is why there was a small speck of dust under the film that disturbed the appearance.

If the battery is charged, which also happens quite quickly, you can turn the clock on. To be able to use the watch as a smartwatch you first have to download an app on your smartphone. For this purpose, a QR code appears on the clock that you have to scan with the smartphone to finally get the link to the app. The app is not available in the official App Store! Also, you have to give the app rights to the notification view, so that, for example, received SMS can be forwarded to the smartwatch.
If the UWatch U8 is connected to the smartphone via Bluetooth, you can make initial settings or start apps within the clock. 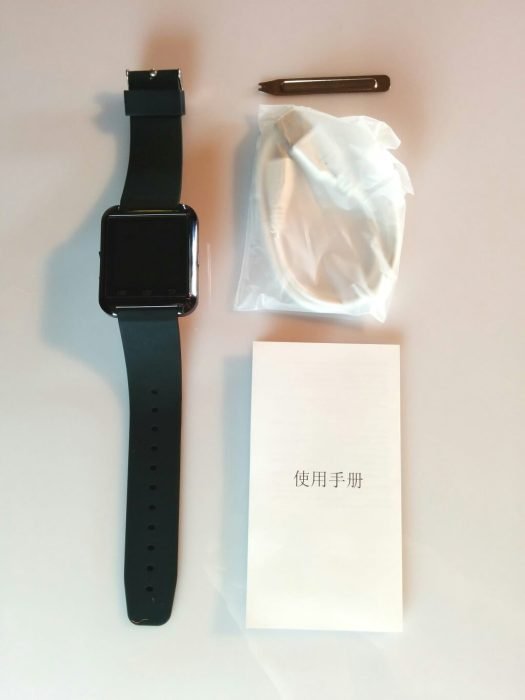 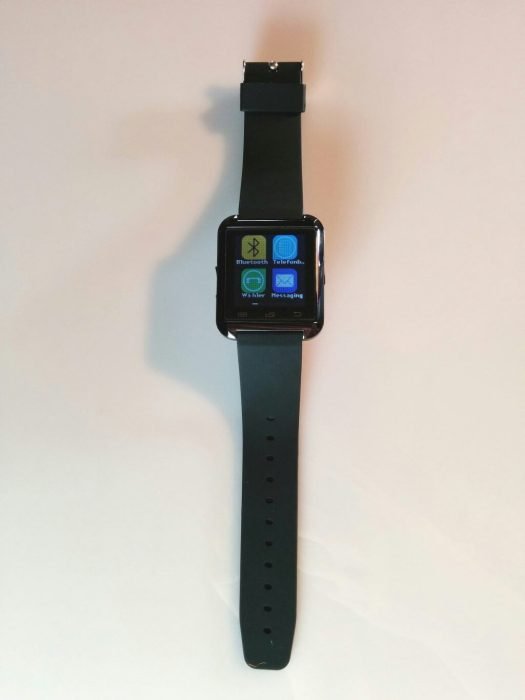 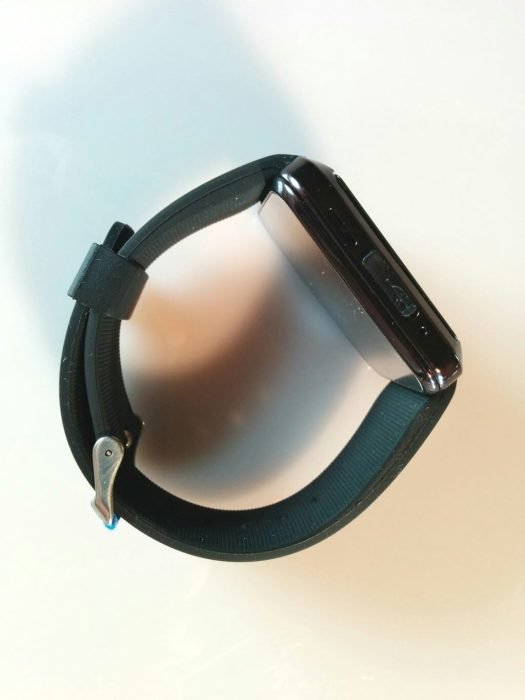 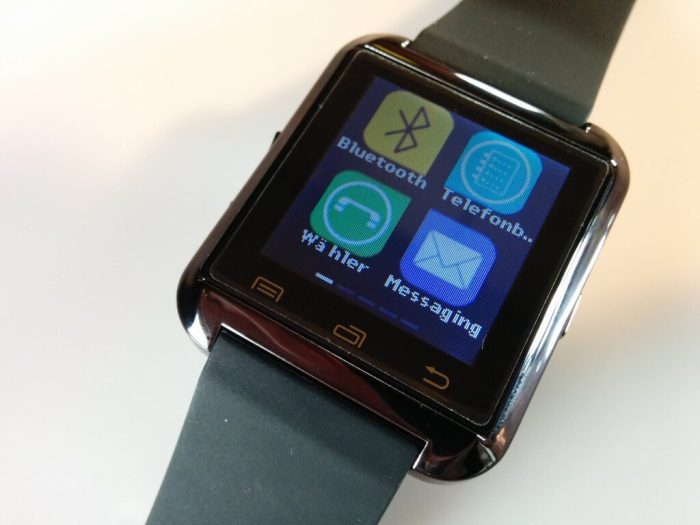 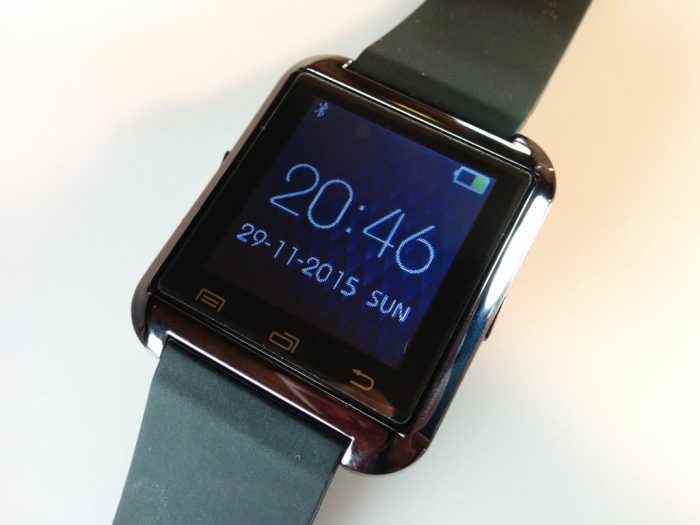 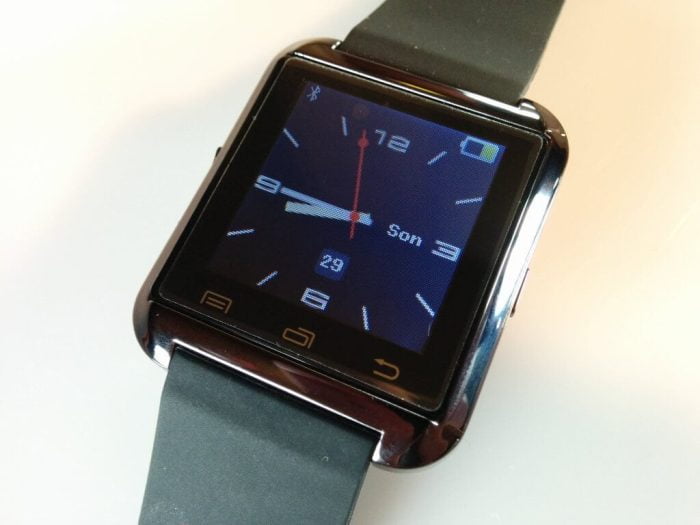 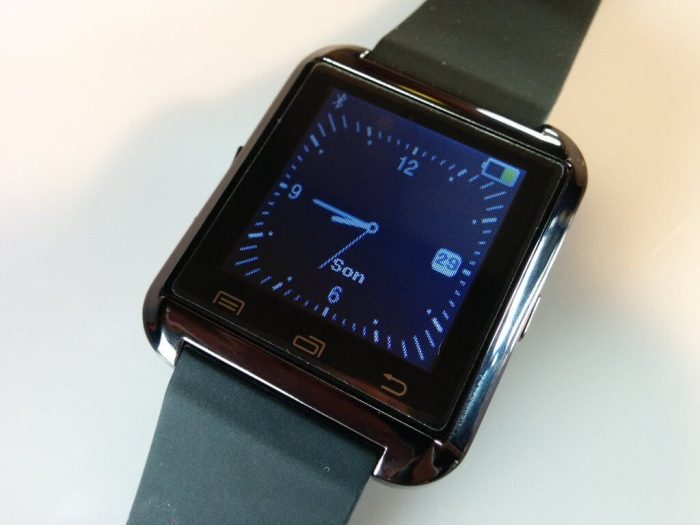 Among other things, you can synchronize the pedometer or activate a sleep monitor within the app. The app is also used to transfer the notifications from the smartphone to the smartwatch. Unfortunately, you have to download the app from a Chinese server. There is an alternative in the Google Play Store! (Link to the alternative)

Numerous gadgets
Android and iOS compatible
Transfer of all notifications

For the low price, the UWatch U8 is an interesting gadget. Although you do not get a full-featured smartwatch here, the functions are numerous. Of course, the clock does not have its own SIM slot or even an HD display. Also, the battery does not last too long. The barometer is partially inaccurate and the altimeter has not worked properly with me. However, what works well is the pedometer, as well as the transmission of notifications. If, for example, I get a WhatsApp message, I do not always have to scramble out my smartphone, but I see the entire message content on the smartwatch. However, you can not respond to the received messages. In terms of price / performance, the UWatch U8 is a nice gadget, but by no means comparable to a real smartwatch.

OPPO Smartwatch - Is it about to be released?
look at