by Timo27. April 2017
Today there is something for the gamer among you. This review is about the TESORO Sharur SE Spectrum Gaming Mouse, which is equipped with an optical sensor and has some interesting features to offer. Read more is worthwhile!
Overview
Manufacturer/Model

The Sharur SE is simply delivered in a cardboard box, which contains a short manual in addition to the mouse. Visually, the gaming mouse appears in an interesting Piano finish with matt rubberised side elements. Due to the symmetrical design, the mouse also meets left-handed needs. Another salient feature is the LED lightingBoth the top TESORO logo, the mouse wheel and the back of the bottom up to 16.8M color variations can illuminate. 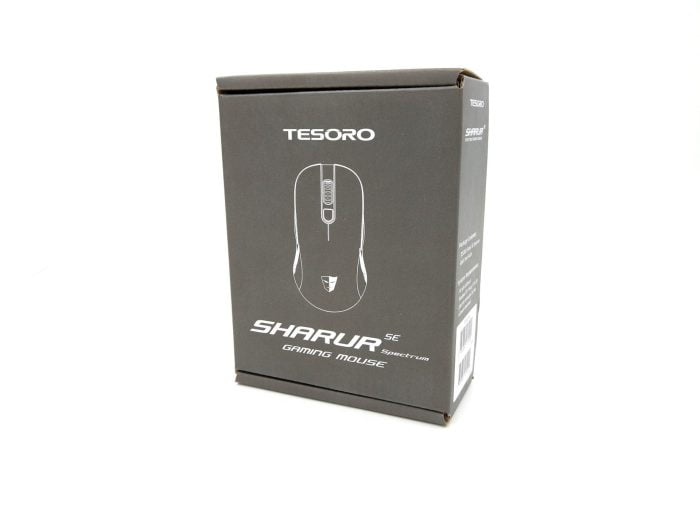 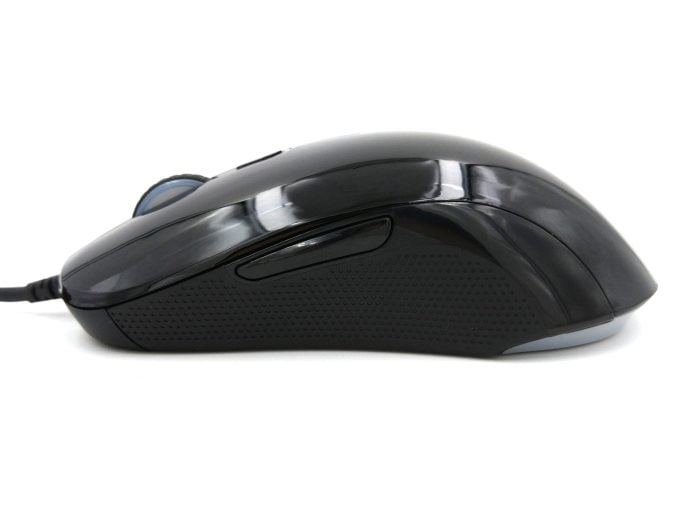 For better sliding, the Sharur SE is on the bottom both front side, and back with Gleitpads fitted. The mouse cable measures 2 meters in length and is gummed. On a Textilummantelung was waived. On the one hand, this does not make the cable too rigid, on the other hand cable breaks are more likely. There are altogether 6 control buttons, In addition to the left and right mouse buttons, there is an 4-level DPI selection button, a clickable mouse wheel and two side buttons. All buttons are freely programmable. The first impression of the click feeling is positive. The keys are tight and have a pleasant pressure point.

Overall, my first impression of Sharur SE is positive. Especially as a left-hander it is often difficult to find a symmetrical mouse with a good feeling. Although the mouse does not have a rubberized surface, it is non-slip in the hand. The lubricity is not objectionable after a few first movements.

As Plug & Play Peripheral, the Sharur SE can be used without a driver. However, to be able to use all functions, you should download the Sharur SE Spectrum driver. This is available free of charge on the official TESORO homepage. A driver CD is not included. 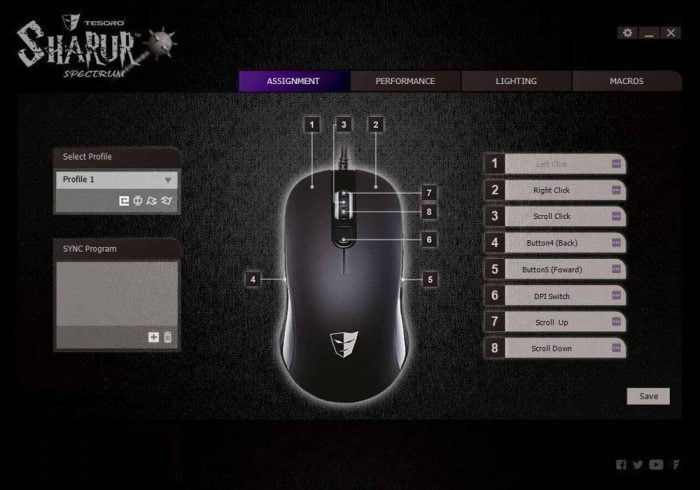 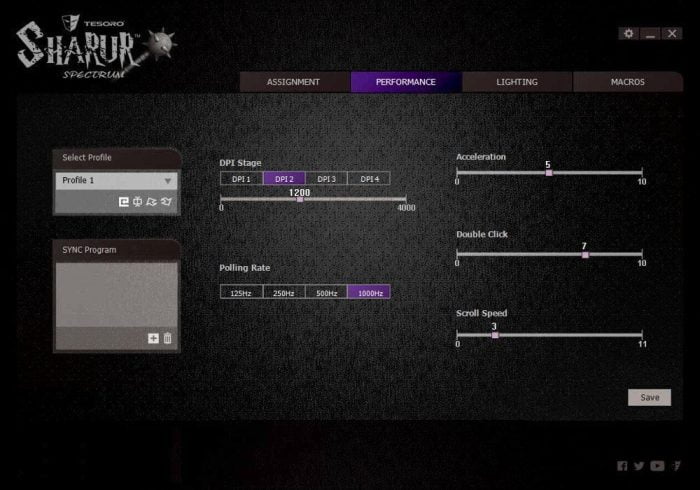 Within the user interface of the TESORO software can be 7 languages choose. German is one of the 7 selectable languages. Unfortunately, that is Translation less successfulwhich is why I quickly changed the software back to English. The software is clearly structured. There is a subsection to keys, there are Performance setting to the DPI, the sampling rate, the mouse acceleration, as well as the click and scroll speed. Another subpoint is the effect management, Here you can choose the lighting of the mouse. In addition, there are four effects to choose from.

In the test, the proved effect management at least for the most part as reliable. Once you have selected the color and the effect, it will take a few seconds for the selection to take effect. To criticize is the function "OFF", which should turn off the lights completely, but did not work in the test. Questionable is also the Macro function, Markos can be configured manually, but the "Record" feature will not work. 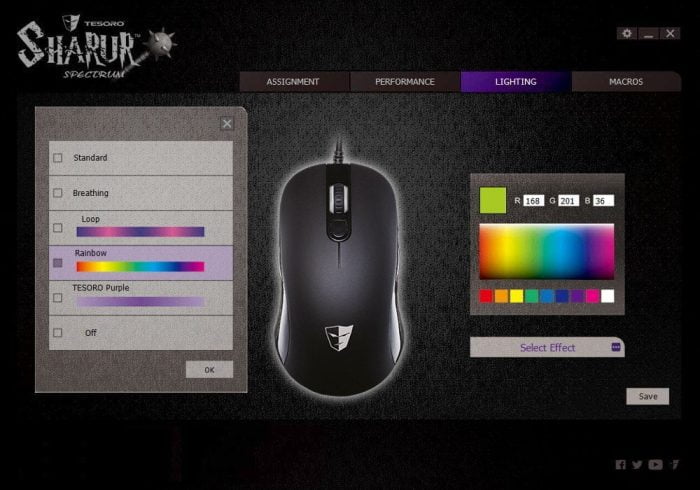 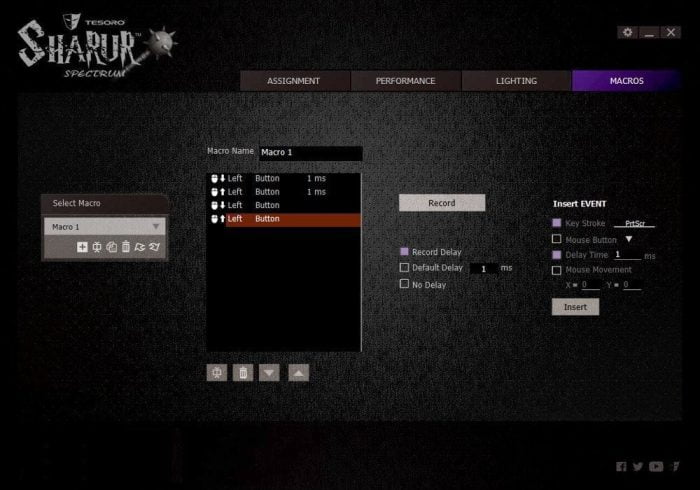 The mouse was tested mostly in the current game title "PUBattlegrounds", as well as several sessions CS: GO were gambled with the Sharur SE. Before I even started a game, I have myself 4 DPI profiles created. You can choose 250, 400, 1000, 1200, 1500, 2000, 3000 and 4000 DPI, In addition, the sampling rate in four stages of 125 Hz, over 250 Hz and 500 Hz up to 1000 Hz be adjusted. I found my favored setting quickly with 1200 DPI and 500 Hz. The switch between the profiles is fluent and you will be informed about the change by a short message on the screen. Especially with CS: GO I found it advantageous to switch between two DPI profiles at lightning speed. 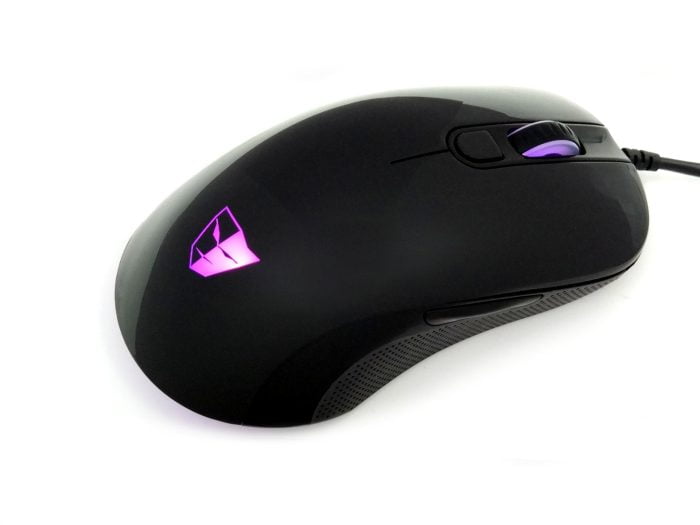 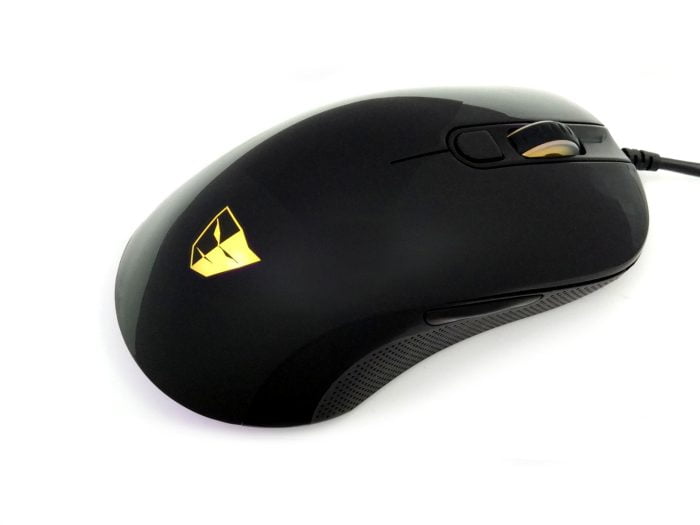 The optical sensor is on Avago A3050which is commonly found in cheap gaming mice. The sensor is said to not belong to the "flawless" or error-free sensors, since eg jittering or a noticeable Algorithm correction occurs or is present. Jittering is easy to understand by drawing a straight line in MS Paint. If deviations occur independently of the mouse's own movement, this failure is called jittering. In fact, the Sharur SE also has a slight jittering. Nonetheless, keep in mind that this mouse is aimed primarily at casual gamers. 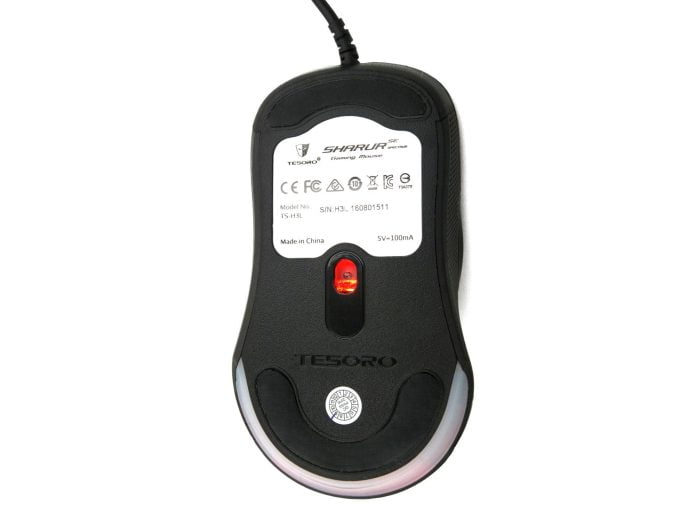 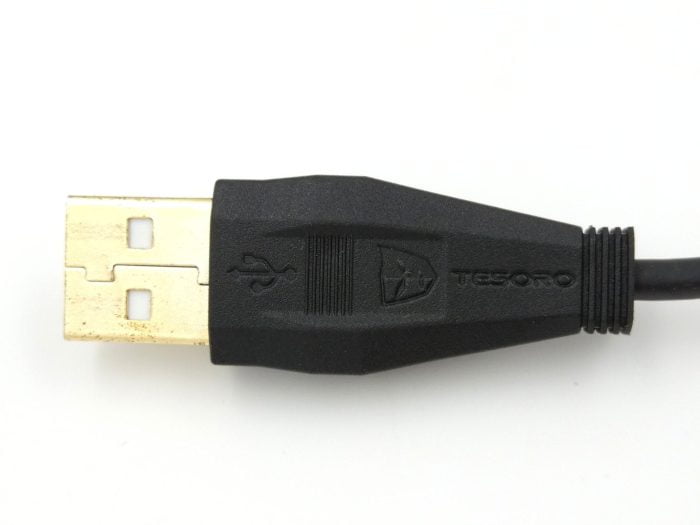 I also count myself among the casual gamers and, given the price, am satisfied with the gaming capability of Sharur SE. You mouse slides cleanly on the mouse pad and lies well in the hand through the side gumming. The disadvantage of the non-rubberized housing is that dirt accumulates very quickly. The handling is not affected by the non-rubberized surface. The above-mentioned jittering also did not affect adversely when playing. What I would have liked would be a slightly higher weight of the mouse. Especially with the precise Aimen, the mouse slides a little too easily on the mouse pad.

The TESORO Sharur SE Spectrum is an affordable and beginner-friendly gaming mouse. The built-in Avago A3050 sensor is not one of the "flawless" sensors, but meets the needs of a casual gamers. Those who are not active in the competitive field and are looking for a visually appealing and at the same time left-handed gaming mouse with good handling should definitely consider the Sharur SE Spectrum.