by Timo25. November 2018
The FRITZ! Box 7590 is the current showcase router from AVM. In the so-called FRITZ! Mesh Set will get interested the router including a wireless repeater 1750E. In the following test we take a closer look at the mesh set.
Overview
Manufacturer/Model

To provide a larger living area with only one wireless router is difficult. Mostly there are several dead spots where no WLAN signal is received. Help is provided by repeaters that expand the network. However, there are problems with the WLAN change of the terminals. So it may happen that the terminal still remains connected to the original network despite better reception to the repeater network and no change takes place. Intelligent Mesh should compensate for this disadvantage and enable a seamless and uninterrupted WLAN coverage.

The FRITZ! Mesh Set includes everything needed to build a small mesh net. Included in delivery are the FRITZ! Box 7590 including the respective connection cable and instructions, as well as a FRITZ WLAN Repeater 1750E.

The FRITZ! Box 7590 comes in a sleek red and white design. The router can be used both lying and mounted on the wall. The antennas are visually inconspicuous hidden in the housing. The top of the case contains the status LEDs, which provide information about the DSL, the WLAN, the telephone, the WPS and the Info. Detailed labels are available. Adjacent control buttons control the respective function. 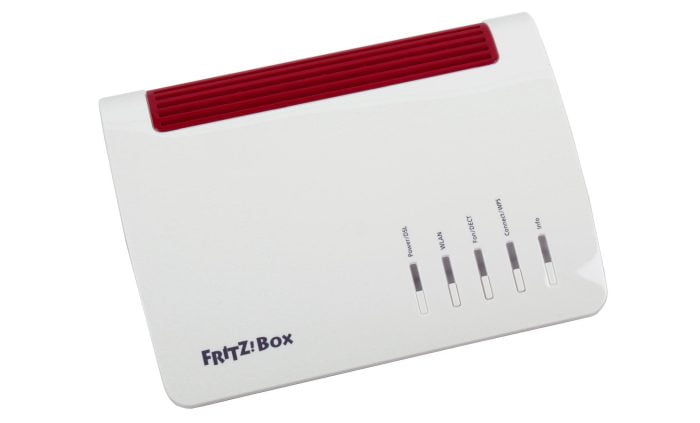 The setup of the FRITZ! Box and the repeater is easy. The setup wizard guides you through all steps in an understandable way. Users of an older FRITZ! Box can transfer existing configurations to the new model. The FRITZ! Box 7590 comes with FRITZ! OS 6.83, but can already be upgraded to FRITZ! OS 7.

The FRITZ! OS 7 user interface is extensive. There are many settings and functions. As a result, the system is also nested and the desired function can only be found after several clicks. Useful features include an integrated media server, a NAS, a smart home control and mesh management.

The FRITZ! Box 7590 is among other things a dual-band AC router, which can build a 2.4GHz and 5GHz net. The theoretical maximum possible transmission speed is up to 1.733 Mbit / s in the 5GHz network. With MU-MIMO support, multiple clients can be serviced simultaneously to provide the maximum available bandwidth as needed.

For the performance test, the powerful Intel Wireless AC-8265 WLAN card was used. The transmission speed was determined by transmitting a file via a NAS. The distance of the router to the clients is 2 meters. In the 2.4GHz network, a maximum transmission speed of 30 MB / s was measured. The 5GHz network has reached 95 MB / s.

Important is of course the wireless range. Compared to other WLAN routers, the range is at the highest level and can cover an 3-floored residential building. If you want to extend the range, we recommend the FRITZ WLAN Repeater 1750E, which is included in the Mesh Set. The construction of a dense network has made AVM user-friendly. Connect the repeater, pair with the router and a mesh will automatically be established. In the mesh composite, the delivery of the respective node succeeds fluently, so that no connection gaps arise.

The DSL modem of the FRITZ! Box 7590 supports for the first time 300 Mbit Supervectoring VDSL connections. Due to the lack of a powerful DSL connection, the FRITZ! Box could only be tested on a DSL 16.000 connection. There was what the management maximum loosely achieved. Stability problems did not occur.

Worth mentioning is also the NAS function of the FRITZ! Box. Data media can be connected to the router via USB 3.0. The write speed measured in the test with a FAT32 formatted USB stick is moderate 20 MB / s. The reading speed reaches a maximum of 23 MB / s. A highlight is the FRITZ! NAS not off. In turn, the administration interface of the NAS is well implemented. Connected media can be accessed easily with just one click via the browser.

You can not go wrong with the FRITZ! Box Mesh Set. Excluding the weak transmission speeds of the USB 3.0 sockets, the FRITZ! Box 7590 offers an all-round carefree package consisting of high-performance hardware and functionally extensive user interface.

Particularly interesting is the AVM mesh, which is easy to build and expand. WLAN to the last corner is guaranteed no problem!