by Timo21. November 2015
A real outdoor smartphone should not only be waterproof, but also be protected from any external impact as much as possible. Water, dust, bumps, heat and cold should not affect a good outdoor smartphone. How are these properties on the enjoyEC V9 Outdoor Smartphone apply and how the smartphone otherwise strikes, I have looked closer.
Overview
Manufacturer/Model

The smartphone was delivered in a simple cardboard box. On the back of the box also individual technical details were printed. When you open the box, you will first see the enjoyEC V9 packed in a plastic wrap. In addition, were included in the delivery:

A screen protector was already on the screen, but not very accurate.

When I first picked up the smartphone it seemed very powerful. Especially the case makes the smartphone look very large with only a 4.5 inch large screen. But also rightly. An outdoor smartphone is currently characterized by a massive housing, which should protect the hardware from any impact as much as possible. The case itself is made of a hard rubber and partly of hard plastic. The back is held by 6 screws, which you have to open first to get to the battery at all, but also to even insert a SIM card or SD card. Due to the massive housing and the numerous function keys of the smartphone, which are mounted both on the left and on the right, a little harder to use. Below the display are 3 capacitive buttons. The charging socket or the audio output, which are located on the lower and upper edge of the housing, are closed with a rubber sealing cap. A notification LED does not have the smartphone. Overall, my first impression is quite positive. 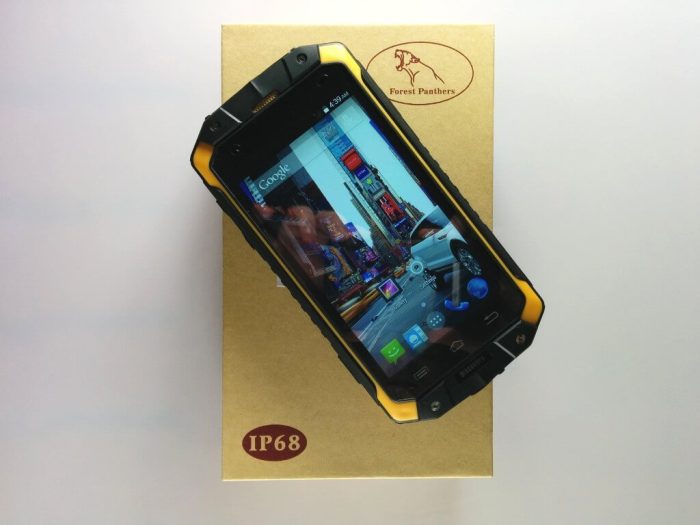 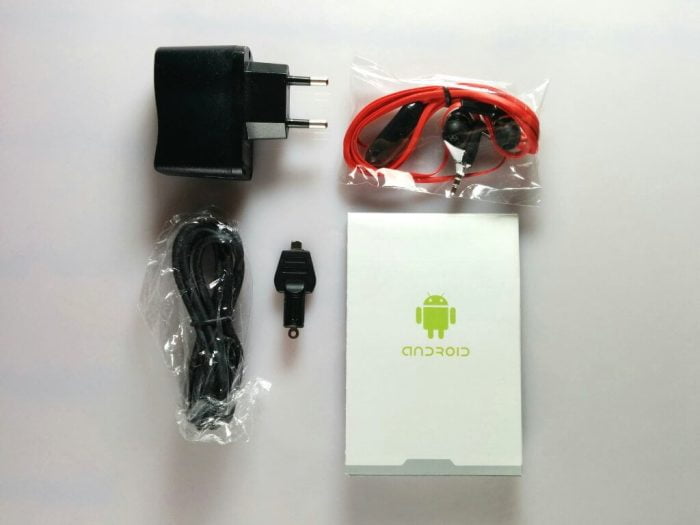 The built-in hardware of the V9 is more in the low budget range. The 4.5 inch display only offers a resolution of 960x540 pixels, and only a 1.2 GHz dual core processor from Mediatek is installed. Regarding the RAM, we only get 512MB and the internal memory is a bit tight with 4GB, but can be expanded with a micro SD card. Without memory expansion, you still have around 270MB available.

Nevertheless, you should not be disappointed with this rather inferior hardware, because the strengths of the enjoyEC V9 are otherwise, namely in the outdoor suitability. What brings me a high end smartphone that crashes into 10 parts immediately after an impact, or that just gives up after a quick dip in the water. 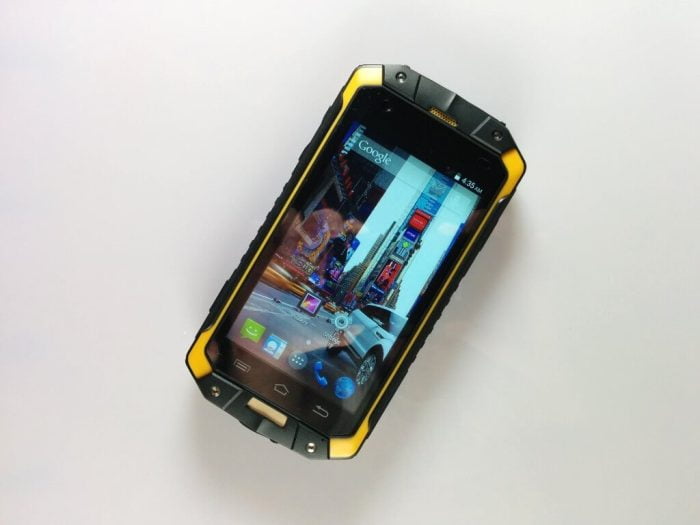 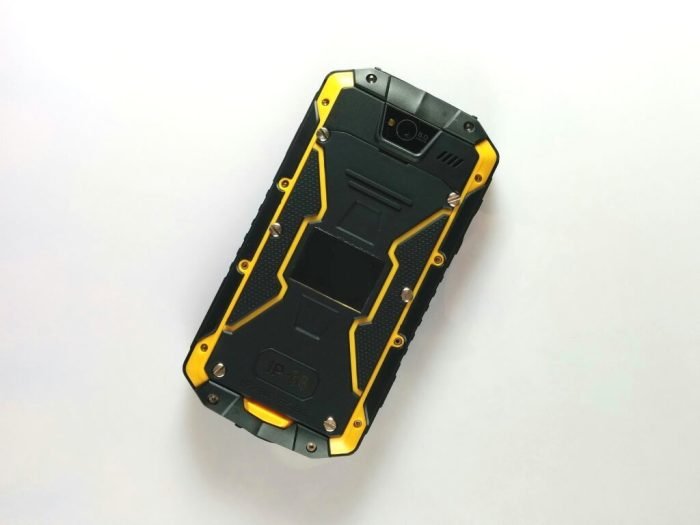 I have tested the enjoyEC V9 several times to prove its outdoor suitability. First, I dipped the V9 in a bowl of water to see if the smartphone is actually waterproof. In this case, one should especially make sure that the back is firmly screwed and also the rubber caps are firmly on the individual connections. After a water bath, I could still use the smartphone without any problems. Water has not penetrated water (see video).
In another test, I dropped the smartphone from a standing height to the ground. Even this fall, the smartphone has survived easily.

In the third and final test, I put the switched-on V9 in the freezer for several hours. The V9 was visibly frozen, but it still worked perfectly.

The V9 also has a high-quality GPS chip integrated, which supports not only the conventional GPS standard but also A-GPS. As a result, the position determination is performed even faster and more accurate. An electronic compass is also integrated so that the V9 can also be used as 'pedestrian navigation' or just for orientation in the forest.

The operating system was Android 4.4.2. The Android used here is also largely based on Stock Android, so except for me 2 not known apps, no other third-party apps were installed. The V9 can be updated directly via the settings menu. Updates can be received here OTA (Over The Air). Unfortunately there was no current update to a higher Android version.

Except for a crash of Google search, the system was quite stable. Despite the rather meager hardware, I was able to move smoothly through the user interface and apps could be opened quickly. The system is quite well matched to the hardware used here.

Although no HD display was used here, this fact is no longer tragic with a display with only 4.5 inches (according to CPU-Z only 4.08 inches). Despite the numerically low resolution of 960x540 pixels, the display looks sharp. Only when you take a closer look, do you notice individual pixels, especially with fonts. According to CPU-Z, the point density is 239dpi.

The displayed colors of the display are strong and the viewing angle stability is neat.

The strengths of the smartphone are clearly not in the cameras used here. Although the V9 comes with 2 cameras, namely a rear camera with 8 megapixels and a front camera with 0.3 megapixels, but the shot images are interspersed with a picture noise even in good lighting conditions.

It is interesting, however, that the rear camera has both an LED flash, as well as a car focus. For spontaneous shots, the rear camera of the V9 is certainly sufficient, but who puts much value on a good camera, will not be too happy with the camera used here.

The reception with the V9 is good. My interlocutor understood me well, as well as I understood him well. The wireless connection and also the Bluetooth (2.1 only) connection are also stable and there were no crashes.

With 4000mAh the V9 Outdoor Smartphone has a rather big battery. Even after 5 hours Screen On Time, I have not reached 50% yet. Especially with an outdoor smartphone you should expect a large battery.

The enjoyEC V9 may not have the best hardware installed, but someone looking for a high end smartphone will certainly not get an outdoor smartphone. Especially if you need a solid smartphone, with which you can sometimes handle something rough, you are well served with the V9. Regarding the outdoor suitability, the V9 met my expectations.

The enjoyEC N8830 smartphone in the test