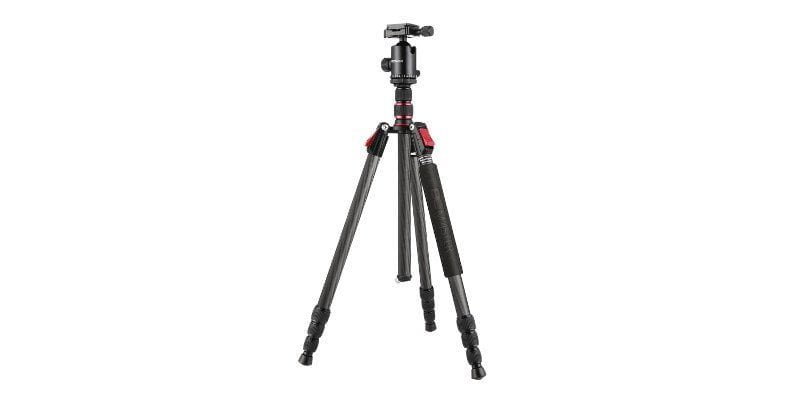 by Timo14. March 2017
The BC Master TC533 is a multifunctional carbon camera tripod with a practical ball head for digital, SLR, compact or DSLM cameras. Whether a purchase of the reasonably priced BC Master camera tripod is worthwhile and whether one can possibly even compare it with camera tripods of well-known sizes, such as Manfrotto, more in this review!
Overview
Manufacturer/Model

First impression of the BC Master TC533

The camera tripod comes in a handy nylon tripod bag with zipper and carrying strap. The bag is additionally padded for safe transport. In addition, a threaded bolt and a connecting piece, which converts the tripod into a monopod, as well as a suitable Allen key are included. A multilingual user manual is also included. 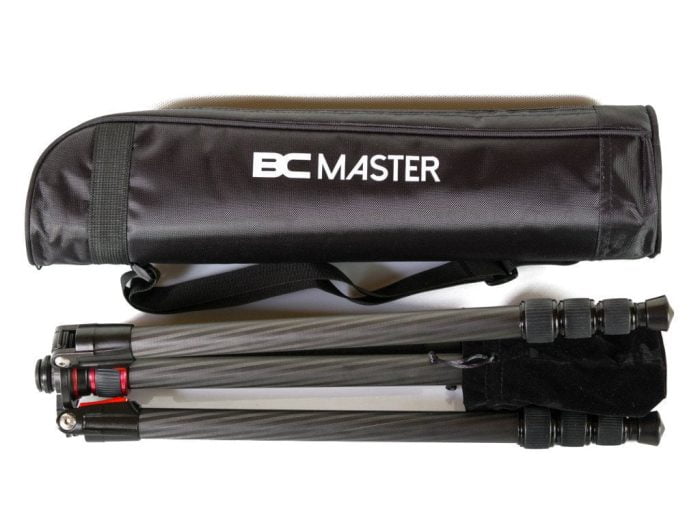 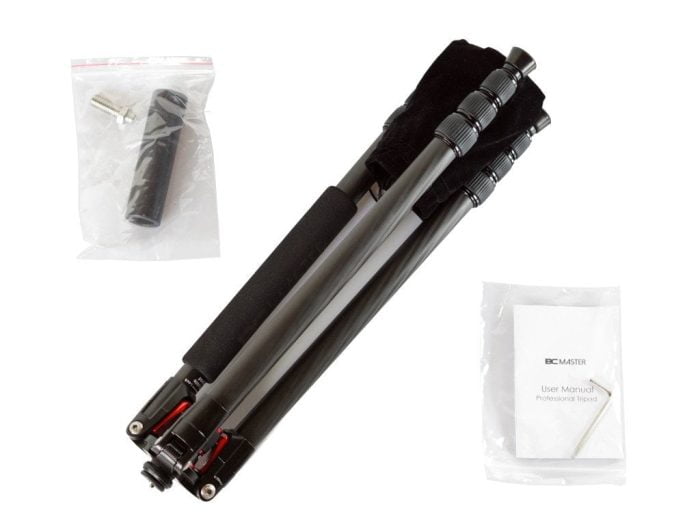 The design of the BC Master TC533 is simple. The Tripod legs are made of carbon, which is just to be regarded in the construction of a tripod as a nonplusultra. In addition to a noble appearance that also gives a high breaking strength. At the same time, the use of carbon is low Weight only achieved with 1198g (weight with ball head - 1602g), whereby the TC533 at an additional Folding size of 490mm becomes a comfortable travel companion. Ball head velvet quick release plate are made of metal. For a high compatibility with separate accessories provides the used ARCA system, Unfortunately, both the quick release plate and the adapter plate have no scaling.

The processing is according to the price good and not objectionable. The screw caps (Twist-lock) The tripod legs grip softly and can be moved in and out without play, as well as the steplessly adjustable joints snap in. 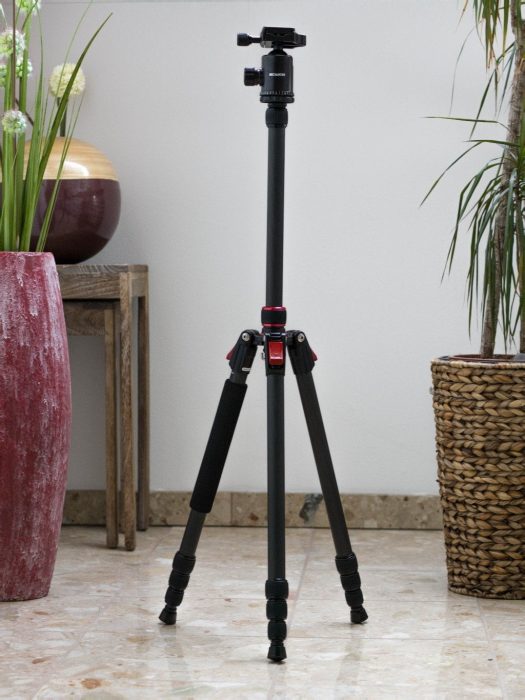 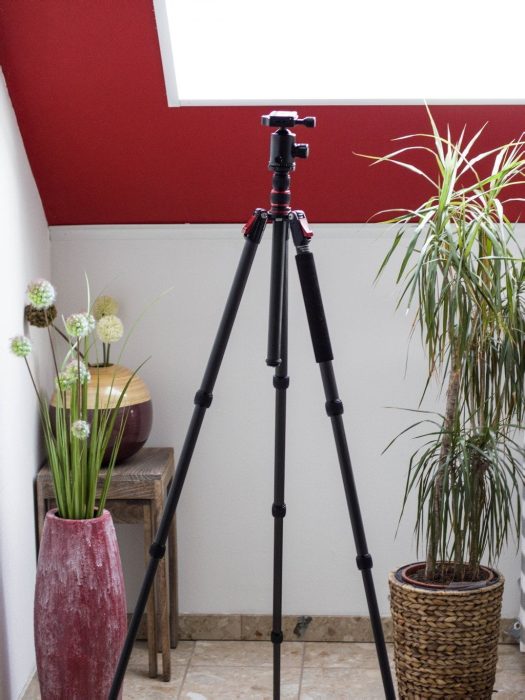 The tripod legs consist of a fixed and 3 extendable segments, Completely extended and with the lowest angle of attack the TC533 achieves one Total height of 1.75 meters, The highest level of stability is good, as long as you use the tripod on a level surface. Slip-resistant rubber feet on the leg ends provide for a slip resistance. Spikes for a better grip on uneven ground are not included, but can be bought later by the 3 / 8 inch thread and screwed on. It would have been more desirable to add matching spikes to the scope of delivery or to integrate them directly into the stand base.

For even more support extendable hook at the bottom of the center column, Thus, the weight of the Statives can be increased and at the same time you have stowed your luggage well.

The BC Master camera tripod is versatile. As Tripod it reaches a maximum height of 1.75 meters. Due to the height-adjustable center column and adjustable by three levels Angle of attack (180 ° foldable), the extension height can be raised minimum 50 centimeters to reduce. The Center column is completely removable and can also be used overhead for macro photography. What is missing is the possibility to use the center column across.

Another use of the TC533 is its use as monopod, From the removable center column and the grippy tripod leg with foam rubber coating can be conjured up as a handy monopod. 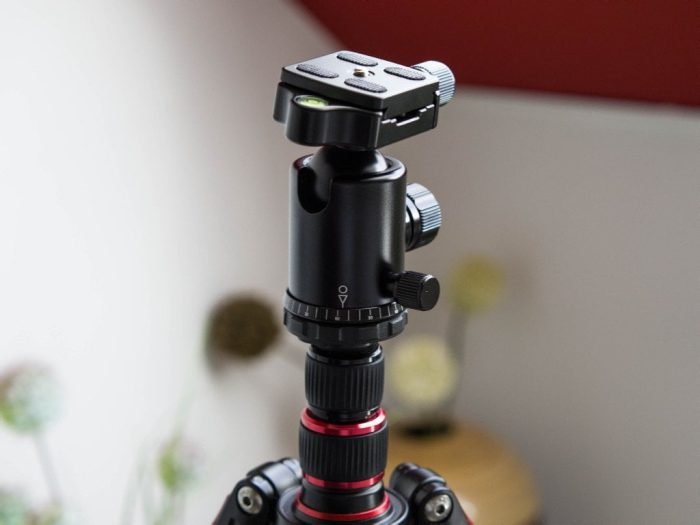 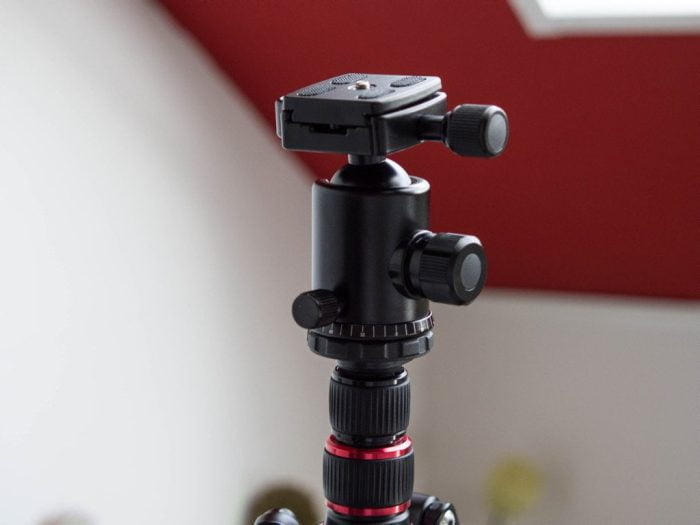 Except for the lack of spikes and the lack of ability to attach the center column across, the BC Master TC533 has so far left a decent impression on the price. Of course, the tripod also has to prove itself in practice.

By the Twist-Lock system and locking the angle by means of locking rockers, the TC533 built in no time. The tripod head uses a ARCA systemso that the camera including the quick release plate is quickly attached to the adapter plate. For alignment, the tripod head offers a small spirit level, which is however covered with attached camera. This placement is unfavorably solved, since you have to align the tripod head for horizontal shots before placing the camera. Other spirit levels, for example, on the tripod leg holder looking in vain. Also worthy of improvement is the grip of the locking screws. Although they grip clean and firm, but a rubber jacket of the locking screws would have improved the grip. 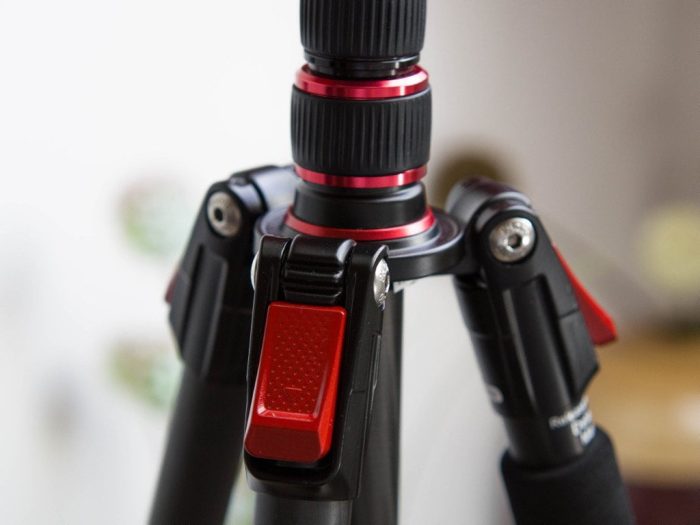 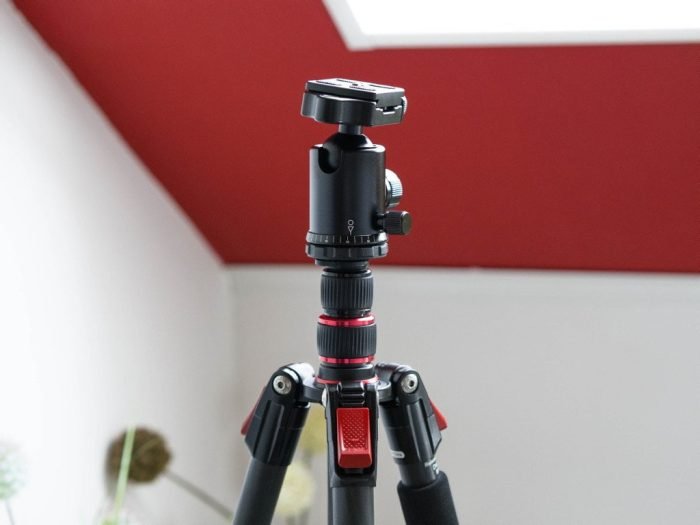 The panoramic plate is firmly connected to the tripod head. Grades are printed legibly. The fixing screw is well placed and does not get in the way of the large locking screw of the ball joint. An attached camera has no effect on the frequency of the panorama element. Clean panoramic images are no problem for the BC Master.

The stability has convinced in practice. Fully extended and with Additional weight on hook (max load 12kg) The TC533 does not wobble a bit, at least on a level surface. For use on uneven surfaces and especially during travel activities make the missing spikes noticeable, which is why a perfect state is made difficult by the only slightly tapered rubber feet.

The BC Master TC533 is a decent camera tripod for the budget-conscious amateur photographer. The tripod was particularly impressed by the very good workmanship and the high quality of the carbon tripod legs - measured by the price. Even in practice, the tripod was able to convince by a simple and fast construction, as well as its versatile usability. On the other hand, it can be criticized that the manufacturer advertises the TC533 as a compact travel tripod, which, given its own weight of only 1198g and a folding size of only 490mm, may also apply, but at the same time does not include spikes for improved stability.

Hello and thank you for the review. I've been following the BC Master camera tripods for days and decided to buy one as well. But I still waver between the TA533 and this one. The difference is just the carbon or are there other differences? I would like to use the tripod on vacation and also take photos for ebay. Does the extra charge then pay for the TC533?

Hello, I do not know the BC Master TA533 or have not tested it, but when I look at the data sheet and the pictures, the only difference is the material of the tripod legs. The tripod head looks as far as identical. If you really want to use the tripod while on vacation, the extra charge for the TC533 could well be worth it, since the weight of the TA533 is probably higher.

Thanks again. I also like the carbon look better. If the weight is lower, it will definitely be the TC533.

I bought the tripod and immediately ordered the spikes separately. Unfortunately, the specification of the thread size is not correct. It's smaller than 3 / 8 inches. The spikes go back now and I have to see where I get smaller ones. Otherwise good review and I fully agree with the review! Thank you!