by Timo20. September 2017
Handy gimbals for smartphones or action cams have now made it into the semi-professional field. But what does it look like if you want to stabilize DSLR or DSLM video recordings with a gimbal? For this we took a closer look at the Zhiyun Crane V2. More in the following review!
Overview
Manufacturer/Model

Especially in the field of semi-professional camera stabilizers could the Chinese company "Zhiyun" already make a name. In addition to the inexpensive and functional, as well as qualitatively convincing smartphone stabilizers (eg Zhiyun Smooth 3), the manufacturer also leads a small assortment professional DSLR and DLSM stabilizers, The Zhiyun Crane is in the improved version 2 the current flagship model of the manufacturer. 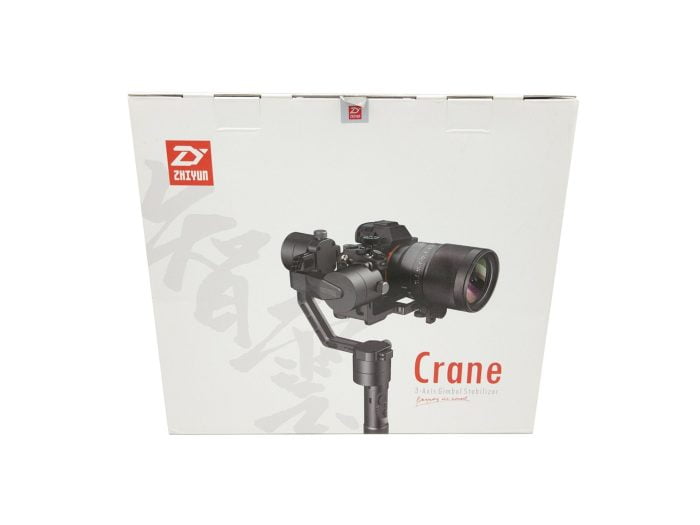 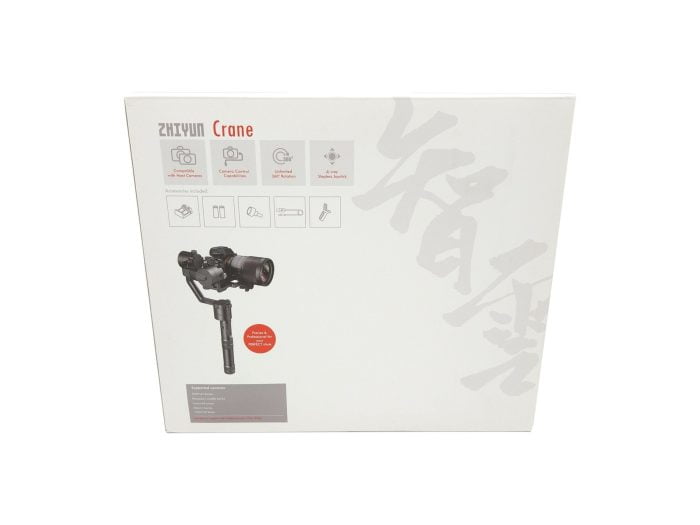 As can already be guessed from the 2 version, the Zhiyun Crane is also available as version 1. Both models, however, only slight differences why the V2 is rather a minimal update of the V1 and does not fundamentally change the model "Crane".

The video review of the Zhiyun Crane V2

The gimbal is delivered in a suitcase-like and above all shockproof Hard Case with matching foam insert. It contains besides the Zhiyun Crane V2 two more original ones Zhiyun 26500 lithium-ion batteries, a fitting one charger, One Micro USB cable, a lens support, two ¼ inch screws and a englischsprachige Operation manual. 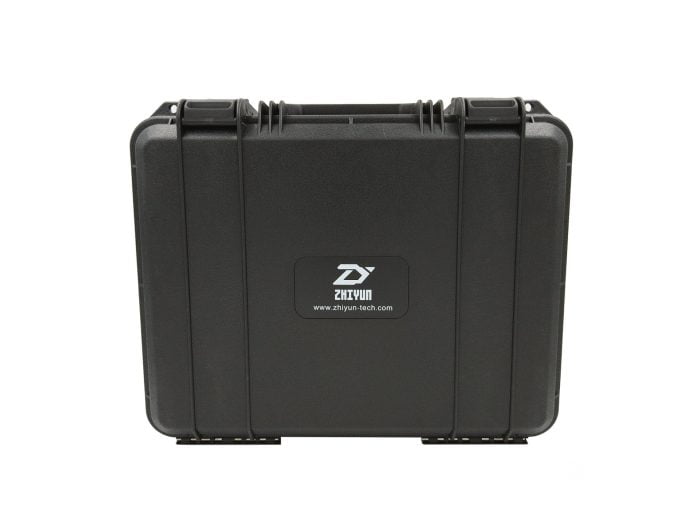 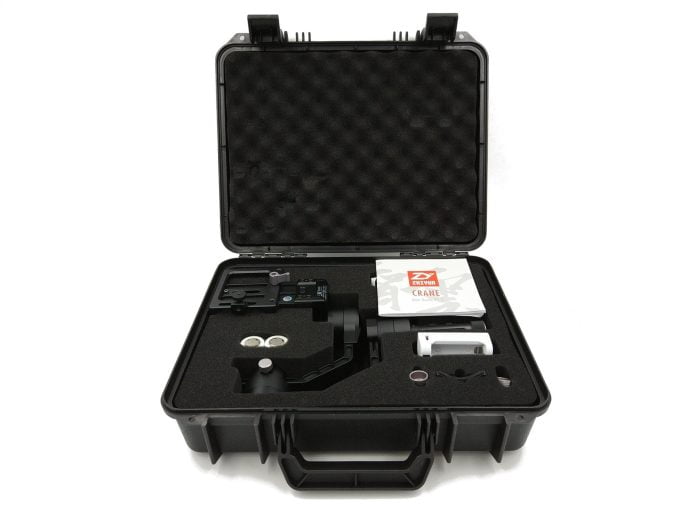 The Zhiyun Crane V2 consists of two parts that can be screwed together. One part is the camera mount including the brushless motors, as well as the firmly connected control. The second part is the removable handle, which also serves as a battery compartment. Both elements are completely off Aluminium manufactured and convince by a high quality and above all, clean processing. Unsightly gaps, jammed threads or sharp edges are looked for in vain on the CNC machined aluminum parts. To criticize, however, is the lack of protection of the two micro USB sockets. Here a cover would have been desirable.

The dimension beat with 173 x 188 x 405 mm. The net weight The gimbal is proud 950g. No wonder that the Crane has to be transported in a small suitcase and is less suitable for mobile use. 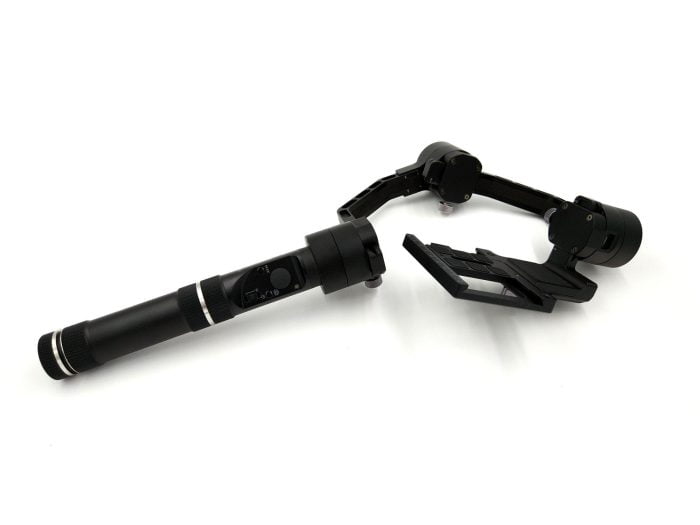 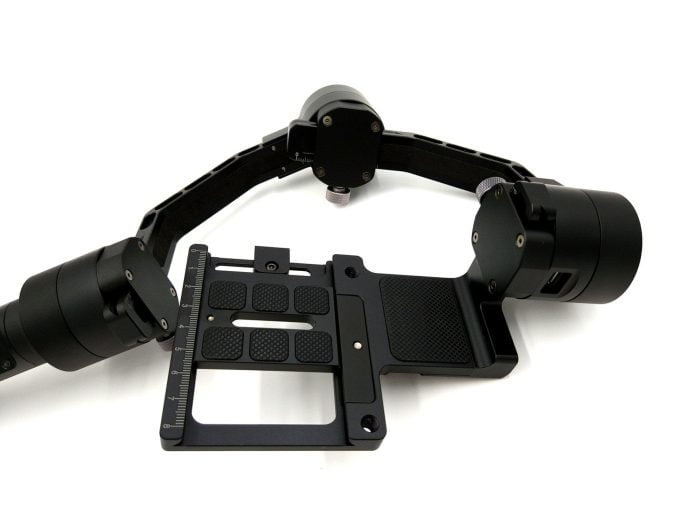 It is crucial to never turn on a gimbal without a counterweight inserted, otherwise damage to the brushless motors may occur. If you want to enjoy your gimbal for a long time, take this hint to heart! The operating instructions point out this crucial point again. The recommended load capacity is between 350g and 1800g.

The attachment of the camera with the Zhiyun Crane V2 is easy from the hand. For this purpose, the camera is only connected via a ¼ inch screw with the camera mount. As a further step you should balance the gimbal and the connected camera. While not absolutely necessary, this step relieves the strain on the engines and improves battery life. The balancing was also no problem in the test and was carried out in a very short time by the quick release plate-like camera mount. An advantage is the printed scale, which makes it easy to remember the orientation. 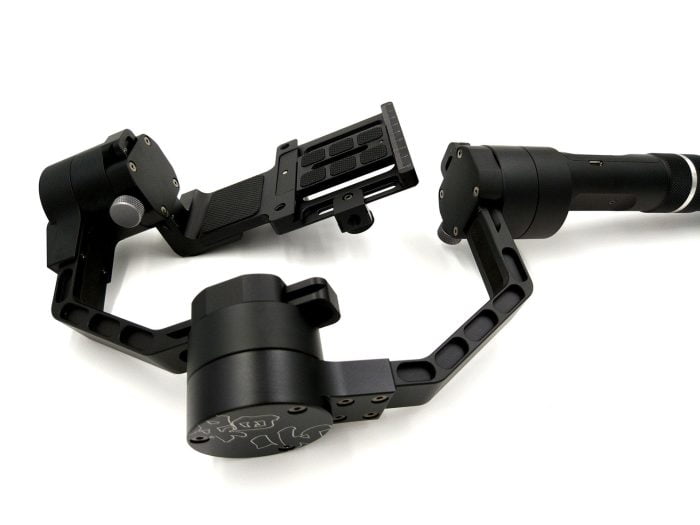 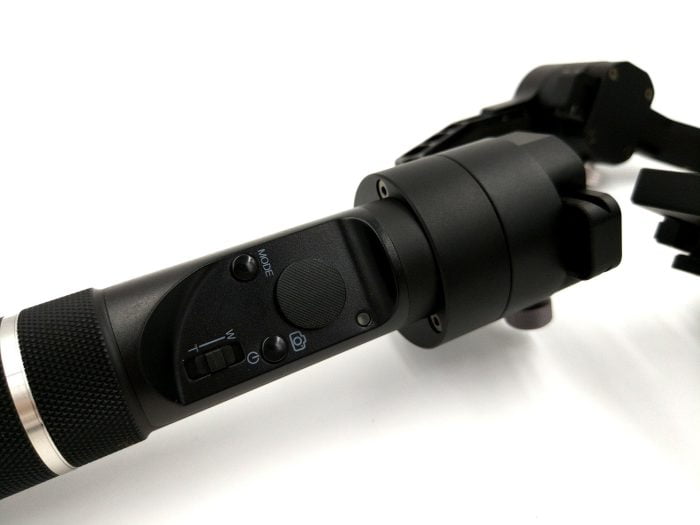 The control of the Zhiyun Crane V2 can on the one hand directly via the gimbal, the Zhiyun Play App or via a separately available Bluetooth Remote respectively. Overall, stand 3 movement modes to select.

If you turn on the Crane, it is initially in the "Pan Following Mode". In this mode are the Tilt and roll axis lockedso that only the horizontal pan movements are followed. However, all axes can be moved freely via the joystick.

By clicking on the Mode button you end up in "Locking Mode". In this mode are all axes locked, No matter how you move the gimbal, it always stays horizontal on a line. Even in Locking Mode, the axes can be moved freely via the joystick.

Double-click on the Mode button to enter the "Following Mode". The Crane follows all Pan, Tilt and Roll movements in this mode. The control via the joystick is retained.

Pressing the Mode button three times automatically performs an 180 ° pan. Somewhat unfavorably solved and already at Zhiyun Smooth 3 is the missing visual indicator of the currently selected mode. Especially when operating remotely, such an indicator would be an advantage. The only indication of the gimbal's LED indicator is the battery level. By a repeated flashing blue LED you can see how much residual battery the Zhiyun Crane V2 is still available. 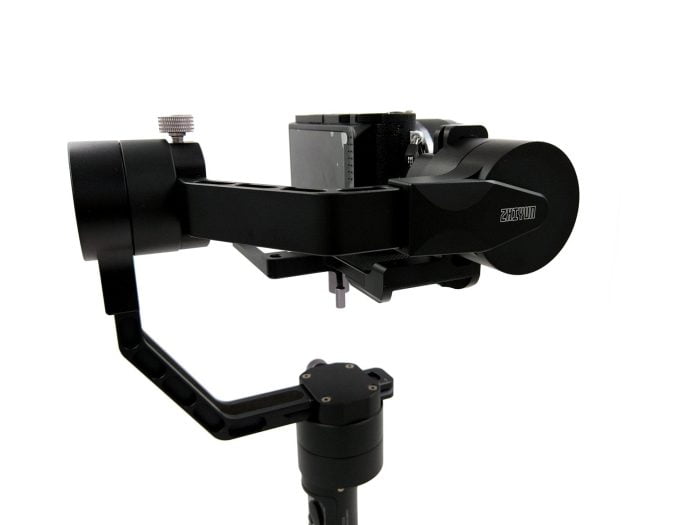 Who owns one Panasonic GH4 or Sony RX, H, QX, ILDC camera is able to control individual camera functions directly via the additional control buttons of the gimbal. Prerequisite is that you connect gimbal and camera via USB. A micro USB socket is located at the height of the tilt axis. For example, you can control the zoom and shutter, as well as start a video recording directly from the Crane.

Another control option is the Zhiyun Play App, which allows the Zhiyun Crane V2 to be operated completely via smartphone or tablet. The app is available in both Google PlayStore, as well as in the Apple AppStore, The connection is established via Bluetooth and did not cause any problems during the test phase.

After familiarizing ourselves with the functions of the Zhiyun Crane V2, let's take a look at how the gimbal works in practice. Among other things, the gimbal accompanied me on my trip to the USA. As a camera, I have a comparatively easy Yi M1 with macro lens (total weight 650g) and a Canon EOS 550D with zoom lens (total weight 1200g) used.

The Zhiyun Crane V2 is not a gimbal that you just take with you on vacation. Just because of the transport size and the high weight you should think twice, if you need the gimbal on the way. However, the simple preparation of the Crane hardly matters. Unscrew the camera, balance and you can start filming. The additional scale makes the respective balance points easy to remember.

In terms of handling, the gimbal cuts a fine figure. The gimbal sits neatly in the hand due to the round aluminum handle. All control buttons are easy to reach and the joystick convinces with precise handling. Smooth panoramic images are thus possible without any problems.

On the other hand, the right thing is critical high total weight, which depending on the camera and lens may be more than 2 kg times. For logging or even IRL streaming, the Zhiyun Crane V2 is therefore less likely. Again interesting is that there is a ¼ inch thread underneath the battery bay, which makes it easy to screw on an extension or a tripod. For even better handling, it is also possible a double handle attach directly to the gimbal. 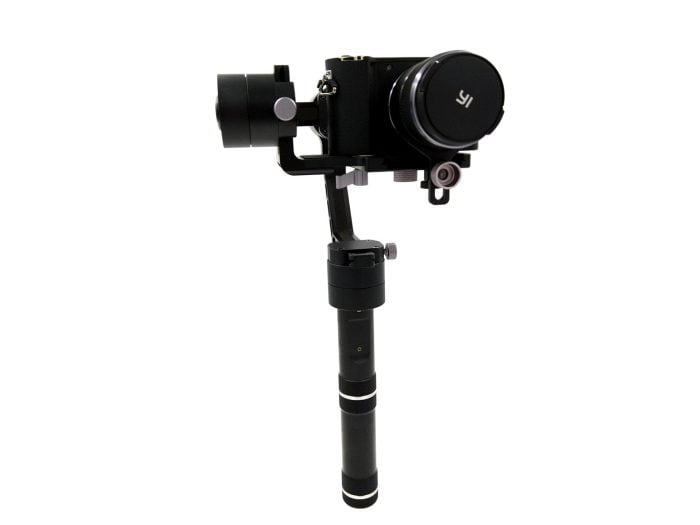 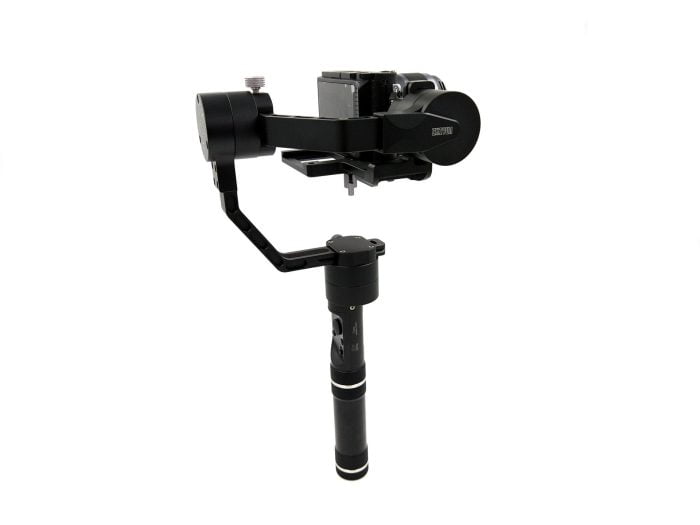 Of course, what matters is how the gimbal strikes for stabilization. Liquid 360 ° pan, tilt and roll movements are no problem for the Zhiyun Crane V2. Roughly speaking, up to a load of one kilogram, the engines are literally under-challenged. Whether fast or slow movements, the stabilization performance is not objectionable. While the Crane is still doing a decent job with increasing weight, there may be occasional micro-bumps. However, these are more of a rarity. Unattractive engine noise, which would be heard later on the recording, there is not. In general, the Zhiyun Crane V2 operates very quietly, which is why only a slight hum of engines is noticeable.

The video sample for the Zhiyun Crane V2

A good figure, the Crane also in overhead filming, the so-called "Bottom Up Fashion" from. The high hanging weight gives you even better control over the gimbal. The only negative aspect is that most of the camera displays in Bottom Up Mode are no longer recognizable.

The gimbal comes with two 26500 lithium-ion batteries stocked. The included Zhiyun batteries have one Capacity of 3600 mAh, The running time depends on how much you load the Crane and how to use it. A good guideline is the manufacturer's information, which by a Runtime between 12 and 18 hours emanates. After a 3 hourly use of the Crane with Yi M1 screwed on, the remaining battery was at 76%. The charging time About the supplied charger is about 1 ½ to 2 hours. 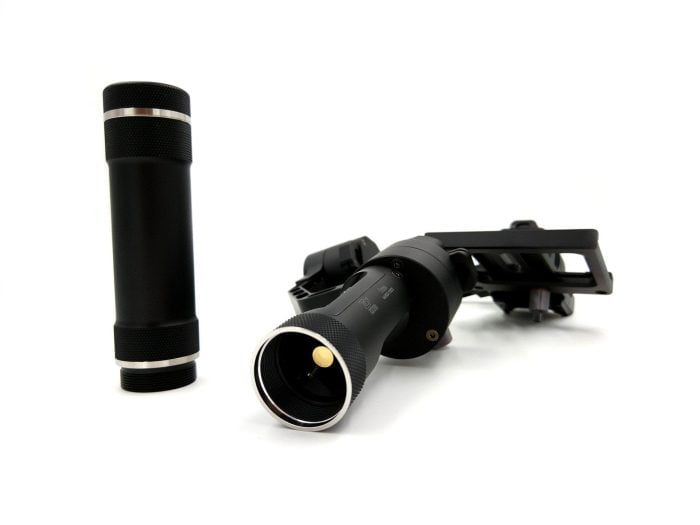 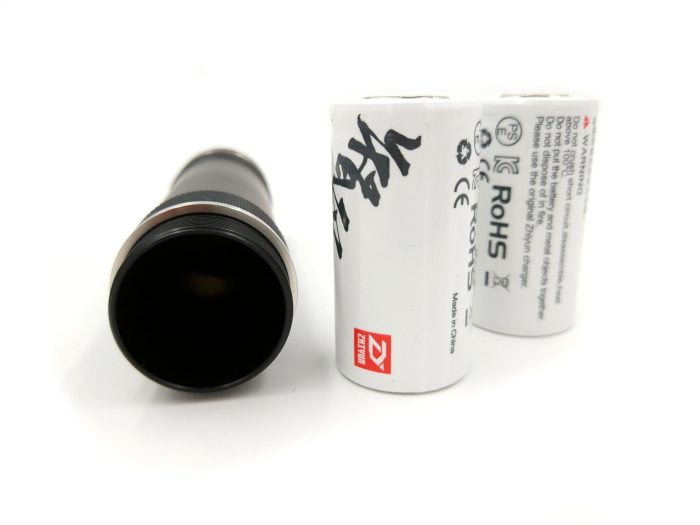 The Zhiyun Crane V2 delivers a completely satisfying overall package and convinces in the first place by its excellent stabilization and easy handling. Due to its high load capacity, the Crane can handle just about any consumer camera with lens. At the same time, the gimbal itself is not a lightweight, which makes it less suitable for vloggers or streamer than for amateur cineasts.

FIMI PALM - Handheld gimbal for the pocket
look at