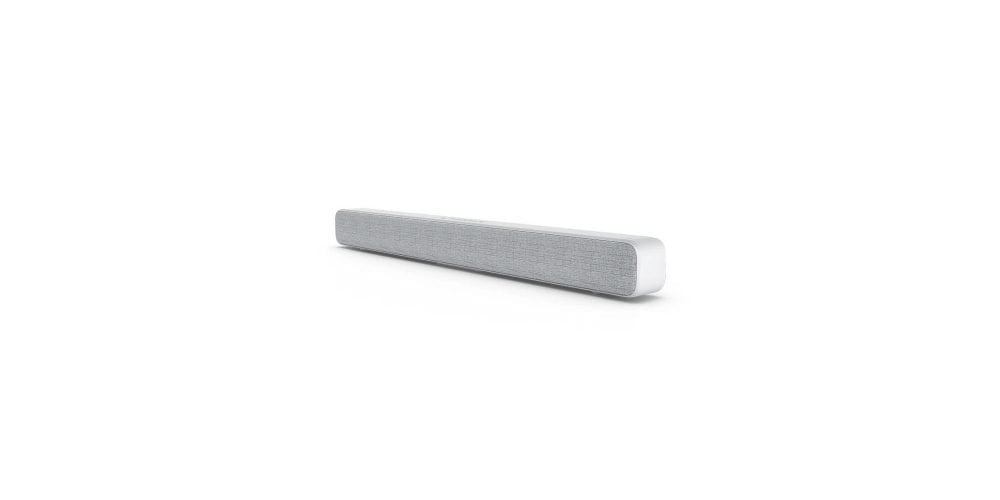 by Timo10. November 2018
Xiaomi's home theater division is again growing! The Xiaomi Soundbar understands itself as a reasonably priced entry, in order to replace any still so bad-sounding TV loudspeaker. If this succeeds you will find out in the following review!
Overview
Manufacturer/Model

Gearbest has reduced the soundbar on offer. With the coupon provided to us you can Xiaomi Soundbar reduced for only € 67.84 to buy. You can access the coupon in the following box and redeem it in the shopping cart. You can find more information at the end of the review in the price comparison.

With this GearBest Coupon you can buy the Soundbar reduced for only € 67.84.
GBTVSBARIT
SHOW COUPON
TO DEAL
4€ Discount
Valid until 31.03

Flat-panel TVs of current generations are getting slimmer, which is why good-sounding sound systems in the flat TV cases hardly find more space. To that Home cinema experience to upgrade sound a so-called Soundbar on, which is placed to save space below the TV set.

The elongated one Xiaomi Soundbar is comparatively slim and visually fits well with the design of modern flat screen televisions. The plain white case is completely made of plastic. On a Length of 88 cm hide behind a plaid fabric front overall two tweeters, two subwoofers and four passive membranes, There is no external subwoofer!

The soundbar is operated via seven control buttons, which are located in the middle of the top of the housing. Left and right outside are the buttons for volume control. In the middle of it there is a Bluetooth button, an aux-in button, a line-in button, a SPDIF button and an optical button. All control buttons are indicated by symbols and each with a status LED. An operation by remote control is not provided!

The connection options are located in the middle of the back of the soundbar. These amount to a DC power input, a Toslink jack, an SPDIF jack, a line-in (RCA) and an AUX-in. Next to the ports is the rocker switch to turn on the soundbar. There is no HDMI input / output and also a USB connection possibility!

For a non-slip and muted state of the 1.92 kg heavy Xiaomi soundbar ensure rubber pads on the underside. A wall mounting is possible. A wall mount for attaching the soundbar to a screw mount is located on the back of the case.

The quality of workmanship Corresponds to the price and is not objectionable. Of the What's in the box includes the soundbar, a power adapter with NEMA-1 connector, a SPDIF cable, two screws and two dowels, and a Chinese user manual.

In addition to wired use, the Xiaomi Soundbar can also via device be connected to a player. The Bluetooth standard used is version 4.2. About the Bluetooth settings of the mobile device is the speaker as "Mi TV Soundbar" to recognize. The almost lossless aptX audio codec does not support the soundbar! 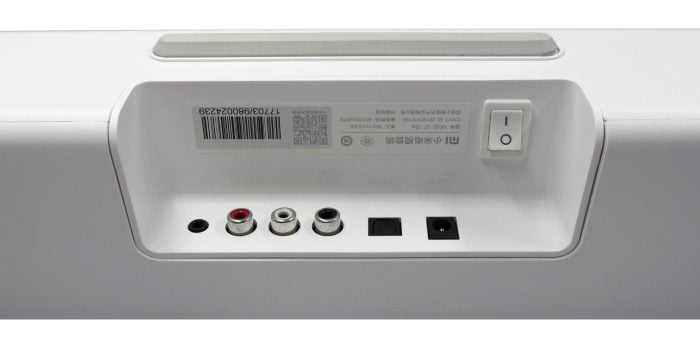 Due to the lack of remote control, source selection is only possible via the direct operating buttons of the loudspeaker. Even if the volume is not connected via Bluetooth and the volume is controlled via the player, the volume can only be controlled directly via the soundbar. A volume control via the TV is not possible! 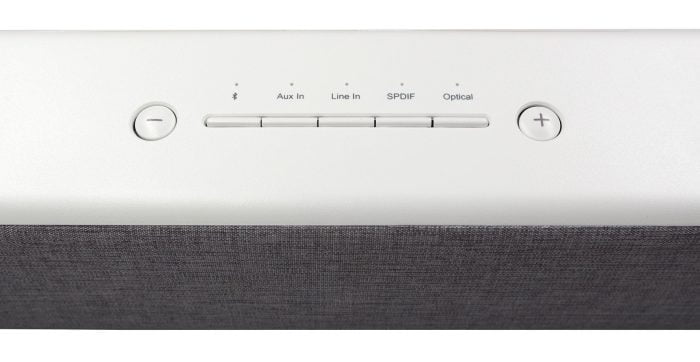 The lack of remote control proved to be extremely impractical in the test. Here at least an IR / App control option via the Mi Remote App would have been desirable.

The sound can be described as full-warm. In particular, the mid and low frequencies are pronounced, making movie effects powerful. Because of the rather round sound, the heights tend to be restrained. As a result, the soundbar lacks clarity, which makes it less suitable for music playback. Voices sound dull in part.

The overall sound is homogeneous and consistent. A certain room depth is recognizable, if not too pronounced. In too large rooms and too large seat spacing, the depth of the room is increasingly lost. The maximum volume is convincing. An unpleasant distortion on high volume is not visible. There are no sound features or enhancements, such as a virtual 3D surround sound, an equalizer or a night mode. Nor are multichannel sound systems supported by Dolby or DTS.

With this GearBest Coupon you can buy the Soundbar reduced for only € 67.84.
GBTVSBARIT
SHOW COUPON
TO DEAL
4€ Discount
Valid until 31.03

The Xiaomi Soundbar presents itself as a cheap way to improve the mostly flat sound of a TV. Sonically convinced the sound bar by a particularly full sound, so depending on the seat distance and room size can be quite a rousing film experience.

Too high expectations, you should not ask the visually appealing speaker latch. Just functional disappointed the soundbar. Although there are many audio interfaces, essential features such as an HDMI connection option, network streaming or a remote control are missing!

Hi Timo, I've seen that the speaker can connect via S / PDIF. I would have to be able to control the volume, would not I? Class review by the way. Keep it up!

It does not work. Have searched for a long time and then ordered me. You can connect them but I could not control them on my TV. There is no remote control. But I am completely satisfied with the Soundbar. At the price you do not wrong.