Under Xiaomi's budget brand "Redmi" regularly appear particularly inexpensive smartphones. Since January, it has been known that Redmi will continue to develop and continue as an independent brand. Comparable to Huawei's young brand "Honor", Xiaomi also wants to serve a young, price-conscious audience with "Redmi".

The Xiaomi Redmi 7 or Redmi 7 continues the budget model range. In the test lasting several weeks, the 150 € smartphone was able to prove its abilities.

The Redmi smartphone is in the 7. generation reached. Like the predecessor models, this too tries redmi 7 one possible good equipment for a small price to offer. Nevertheless, a lot has happened at Redmi. Instead of high-quality metal housing, there is only plastic. Also the size difference to the Redmi Note models has disappeared. Instead of being compact, the Redmi 7 is an 6.26 inch phablet.

Small and light was yesterday. The redmi 7 is with one Size of 15.87 x 7.56 x 0.85 cm and a Weight of 180g a true phablet. Except for the front, which is protected by the way, by Corning Gorilla Glass 5, the housing is made entirely of plastic. The frame is black matte, whereas the back is in the Colors black, blue and red shiny is available.

The smartphone is set up as follows:

On front is the 6.26 inch IPS display. Following the trend, they are relying on a drop-shaped Notch, which surrounds the 8 megapixel front camera. Above the front camera is the narrow but wide receiver.

The smartphone is operated via virtual display buttons or gestures. A white-shining one Notification LED is present and is located on the right side of the lower edge of the housing. The display margins are 3 mm to the sides and 8 mm to the bottom of the case.

The housing frame includes on the right a power button and volume rocker. Left hand is the dual SIM slot. Below are a MicroUSB jack, the mono speaker and a microphone. At the top, the smartphone is equipped with an 3.5 mm audio jack, another microphone and an IR blaster.

The back The Redmi 7 is shiny and offers at least in the colors red and blue an interesting gradient. Unfortunately, the back is not made of glass, but of plastic. This makes them particularly susceptible to scratches, which is why you should definitely use the included protective cover. But otherwise the back is very vulnerable to fingerprints and dirt. Further features of the back are a vertically arranged main camera with LED flash and a center fingerprint scanner. 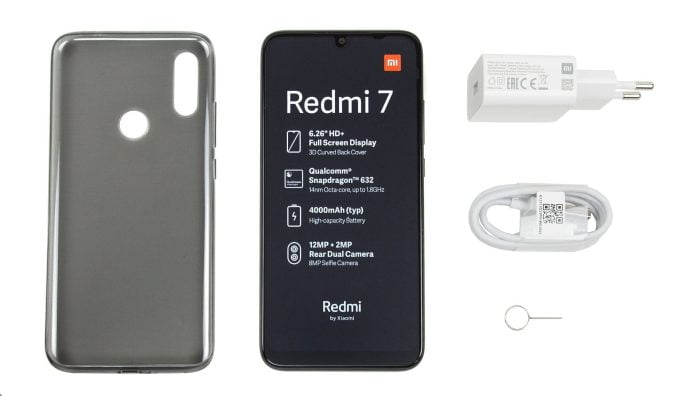 The quality of workmanship is good according to the price. However, the smartphone feels haptic cheap, which in turn is due to the many plastic and the extremely thick housing. The What's in the box In addition to the smartphone includes a silicone protective cover, a charger, a charging cable, a SIM needle and a bulletin board.

Xiaomi has signed up for the Redmi 7 6.26 inch IPS display decided. The Resolution is 1520 720 x pixelswhich corresponds to 269 pixels. Despite the comparatively low density of the dots, individual pixels only become visible with a very close look. The aspect ratio is typical for a Notch smartphone 19:9. 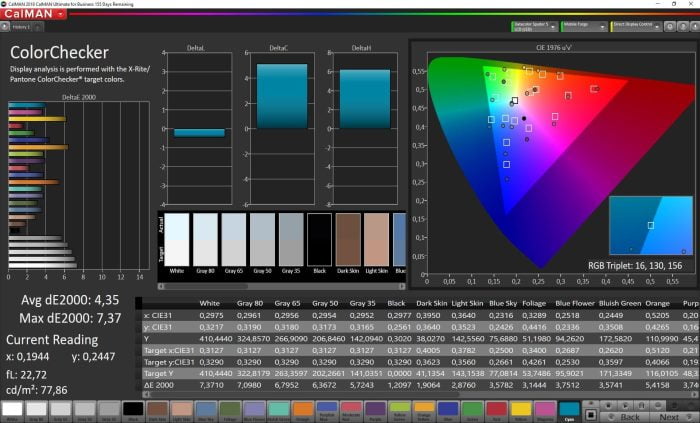 The color deviations measured in standard color mode for sRGB color space are at an average Delta E of 4.35 and a maximum Delta E of 7.37. The grayscale represents the Redmi 7 with a slight blue cast. 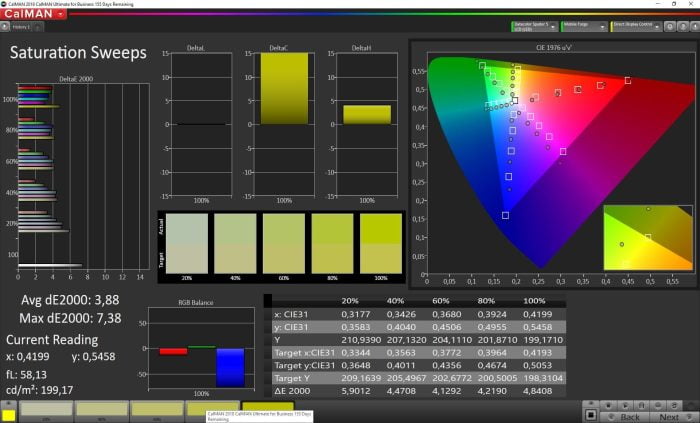 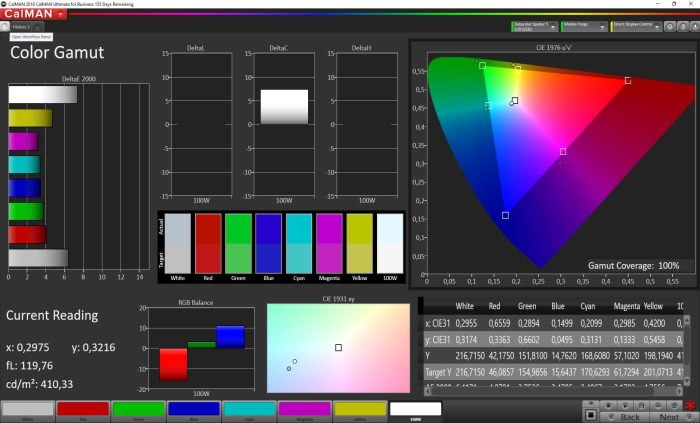 In view of the price, the Redmi 7 is equipped with a very good display. Despite low resolution, no pixels can be seen at normal viewing distance. The Color rendering looks pleasantly natural to the naked eye. Colors are neither too warm nor too cold. Only black looks rather dark gray.

Also the Viewing angles convinced. Tilting the smartphone, slight changes in brightness are visible. The color fastness is largely retained. Outdoors, the Redmi 7 is easy to read. Only with direct sunlight the readability is impaired by the reflective display glass.

The display settings include various settings for brightness, colors, and contrast. There is an automatic brightness mode, three color profiles including a manual color mode and an automatic contrast mode.

The touch screen recognizes up to 10 simultaneous inputs. Unfortunately, entries are registered somewhat delayed, which is especially noticeable when writing fast. The recognition accuracy is good. The display is protected by Corning Gorilla Glass 5, The anti-fingerprint coating makes display glass easy to clean.

The system-on-chip (SoC) uses an LPDDR3 memory controller. Accordingly, the Redmi 7 is available with an optional 2GB, 3GB or 4GB (CN version) memory available. At the Data storage (eMMC) can between 16GB, 32GB and 64GB to get voted. A memory expansion MicroSD memory card supports up to 512GB. Fortunately, it is a triple slot that does not affect the dual-SIM capability.

In the benchmark tests, the Redmi 7 cuts a fine figure. in the AnTuTu Benchmark testing the overall system will score 103.788. In GeekbenchIn addition to a processor benchmark, the Snapdragon 632 achieves a single-core score from 1.245 and a multi-core score from 4325. Wacker also beats the smartphone in 3D applications, especially the 3DMark Benchmark that tests the graphics performance. In the demanding Sling Shot Extreme Test 514 or 547 (volcano) points are reached.

In everyday life, the Redmi 7 can be used fluently. The user interface responds quickly to inputs, animations are mostly run smoothly and the loading times of individual apps are appropriate according to the equipment. Multitasking is possible to a certain extent. Depending on your storage configuration, sooner or later you may experience a limitation of the apps in memory.

Casual gaming is no problem for the Redmi 7. Especially the low display resolution allows most mobile games to play smoothly. However, if you prefer sophisticated titles (eg PUBG), you must reduce the graphics settings accordingly. A reduction in system performance due to thermal throttling does not occur.

The tested Redmi 7 are the Global Version (M1810F6LG), The smartphone comes with MIUI 10.2 Global Stable delivered. The operating system is based on Android 9 Pie, The security updates are on the 01.03.2019 booth. Future updates can be conveniently received over-the-air (OTA).

In the global version MIUI is adapted to the western market. The system is multilingual and can be used completely in German. In contrast to the Chinese counterpart is the Google Play Store including Google Apps already preinstalled. Chinese bloatware is waived. Third-party apps include Facebook, Opera and Aliexpress on the device. If you do not need the apps, you can uninstall them via the App Manager.

MIUI can be loved or hated. The user interface deviates from the structure and visually strong from Stock Android. The system offers a wealth of additional features, such as a security manager, the use of dual apps or a Mi-Cloud integration.

Practical test of the main camera

Judging by the price range convinced the main camera of the Redmi 7 by a decent recording quality. at good lighting conditions create colorful shots with appropriate dynamic range and good detail. To the edges of the picture, a slight blur is noticeable. The PDAF autofocus reacts quickly and focuses precisely. HDR is available in an automatic mode. 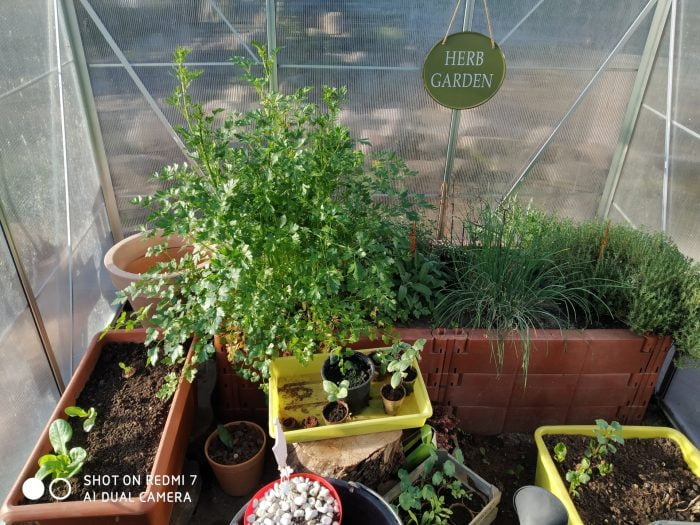 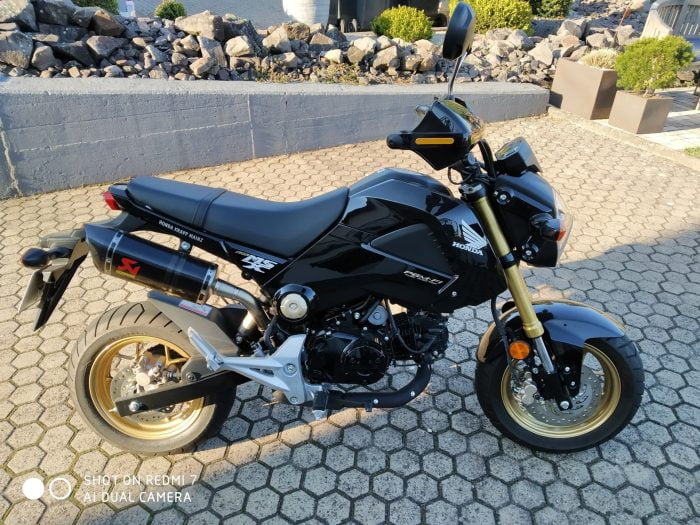 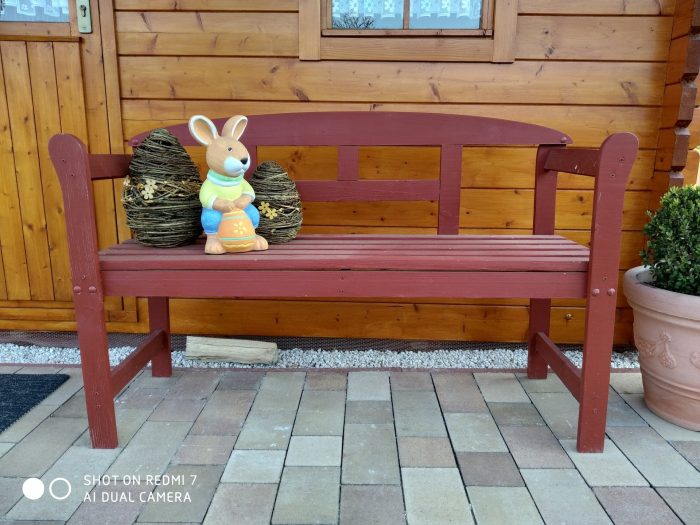 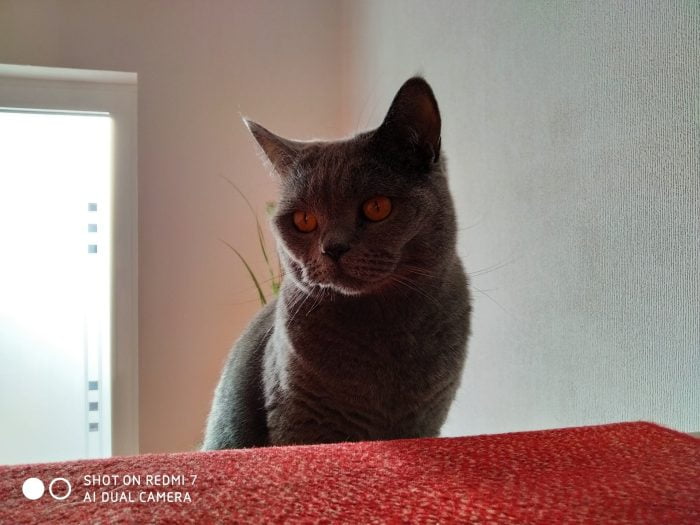 The Camera-AI Detects up to 27 scenes and adjusts the recording according to the scene. For example, plants are recognized by the AI ​​and colors are slightly raised for a more juicy green. The Bokeh mode works surprisingly well and extracts objects and people mostly clean. For complex contours, however, the Redmi 7 reaches its limits. 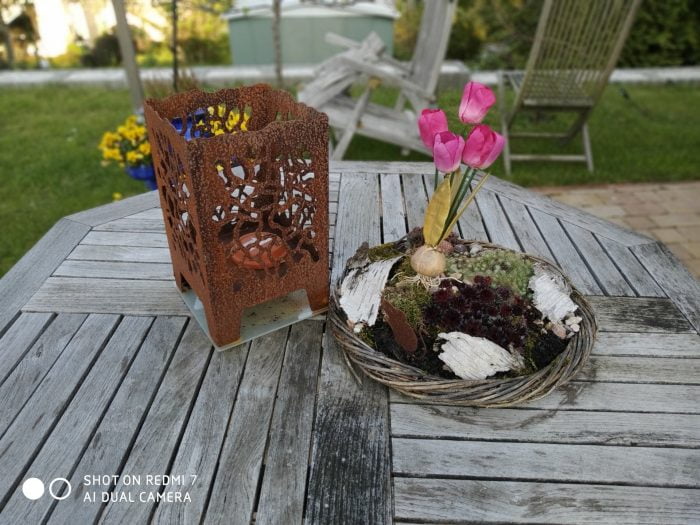 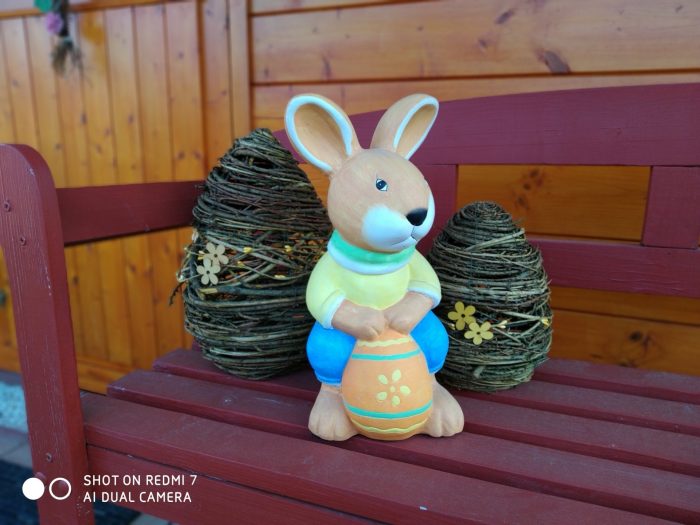 With increasing poorer lighting conditions decreases the recording quality. Colors fade a bit, the noise increases and the autofocus is a bit sluggish.

Videos takes the MIUI camera app with maximum 1080p resolution with up to 60 images-per-second on. The autofocus works very well in video mode and the exposure is adjusted continuously. Unfortunately, the camera does not offer optical or electronic image stabilization. With alternative camera apps, such as OpenCamera videos can also be recorded in high-resolution 4K resolution.

Practical test of the front camera

The 8 megapixel front camera gives good results. As with the main camera, the images are convincing in good light conditions by an appropriate detail reproduction, but decrease rapidly with increasing low light conditions in terms of quality. The color reproduction could be a bit stronger.

The Bokeh mode is available and extracts people precisely. Various beauty filters can be added via the MIUI Camera app. Videos captures the front camera in 1080p at 30 pictures-per-second.

The Redmi 7 Global is well prepared for local mobile communications. The Dual-SIM Smartphone supports the usual mobile radio frequencies in this country. VoLTE and HD Voice available. VoWiFi, however, not. The following bands are offered by the smartphone:

The voice quality is neat. Spoken words are transmitted clearly and intelligibly in both directions. Due to the strong noise reduction, speech can easily distort. The signal strength is very good. This is mainly due to the completely made of plastic housing.

The smartphone only supports Single-band WiFi (802.11 b / g / n), Bluetooth is available in version 4.2. In the WLAN, the smartphone is signal strong. The data throughput is average with about 50 Mbit / s.

The GPS tracking succeeds both outdoors and indoors. Outdoors, the Redmi 7 quickly finds a GPS fix. The location accuracy is about 3 meters. Inside it takes much longer until a GPS fix is ​​found. Here, the accuracy varies between 8 and 15 meters. The navigation with Google Maps ran smoothly in the test.

The others sensors includes a brightness sensor, a gyroscope, a proximity sensor, and an e-compass. NFC does not exist. As a small feature is a FM receiver on board. An IR blaster allows the control of TVs and other IR receivers via app.

On the back of the smartphone is a circular Fingerprint scanner, This unlocks the smartphone reliably and quickly. As another unlocking method is Face-Unlock integrated into the system. Face recognition is done with the help of the front camera. The unlock process via face recognition is a bit slower, but was not tricked out with a photo in the test. Prerequisite, however, are good lighting conditions.

The battery has a Capacity of 4.000 mAh, The generously sized battery keeps the user safe throughout the day. With some surfing the Web, watching videos on YouTube, whatsapping and telephony is the Runtime on well 2 1 / 2 days, Under standby, the smartphone is also very economical and loses overnight only 1-3%. Unfortunately, the Redmi 7 comes only with a MicroUSB socket. Qualcomm's Quick Charge is not supported. The battery is charged with 5V 2A in about 2 hours.

You want to know where to buy the Xiaomi Redmi 7? In our price comparison we list the current offers of the most popular shops. All prices are checked and updated several times a day. Should a shop appear several times, it concerns the different warehouses of the dealer.

There are point deduction for the no longer up-to-date MicroUSB connection, the missing dual-band WiFi and the scratch-prone plastic backside.

Hello, I've also had the Redmi 7 for a week. This is a really great smartphone and I can only recommend it for the price. What I did not manage yet is the WLAN. I enter my data, but it just does not connect. At work it connects without problems. Does anyone have a hint for me how I can solve the problem?

Hey Samuel, is it possible that your Wi-Fi only works on 5 GHz? The Redmi 7 only supports 2.4 GHz WLAN. In the settings of your router you should be able to adjust the frequency band and the channel.

Thanks for your quick reply. It was actually because my Wi-Fi was only set to 5GHz. With 2.4GHz it works great! Greetings Samuel