On the 25. October 2016 has introduced Xiaomi the "Xiaomi Mi Note 2". The smartphone will appear in a total of 3 versions and offers not only an 5.7 inch Curved OLED display but also a very handsome hardware. What can be expected of the Xiaomi Mi Note 2 and how our first impression turns out, you will learn in this preview!

The new Xiaomi smartphone will be in 3 versions appear. The models differ with regard to the size of the main memory, the internal memory, but also with regard to the LTE tapes used. The smallest model costs in China 2799 RMB (380 €) and owns 4GB memory and one 64GB large internal memory. Das middle model is with 6GB memory and 128GB internal memory equipped and should 3299 RMB (447 €) costs. The 3. Model appears as "Global" Edition. The equipment is comparable to the middle version, but was around all LTE tapes extended. The price of this model is included 3499 RMB (474 €), Also in terms of color, there are two choices. All models appear in the colors "Piano black" and "Glacier Silver".

All 3 models connect 5.7 inch OLED display in Curved Design, Under "Curved Design" is understood bezel-less smartphonein which the edges of the display are rounded off from the frame and the display and housing frame are almost identical. A comparable smartphone would be the Samsung Galaxy S7 Edge. For the resolution of the display, there is no further information. Leaks of the past weeks still pointed to one QHD resolution (2560 x 1440) There are only a few voices within the MIUI community Full HD resolution (1920 x 1080), It is known, however, that the Ratio of the display to the front of the housing 77.2% should be 110% of the NTSC color space is covered and that Contrast ratio 100.000: 1 is. By the "Sunlight Display Pro" Technology should make the display easy to read even in direct sunlight. 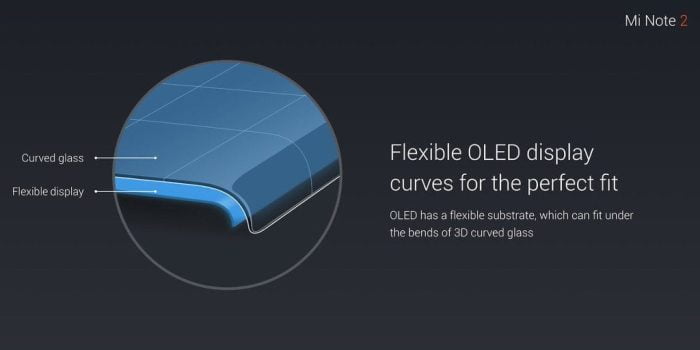 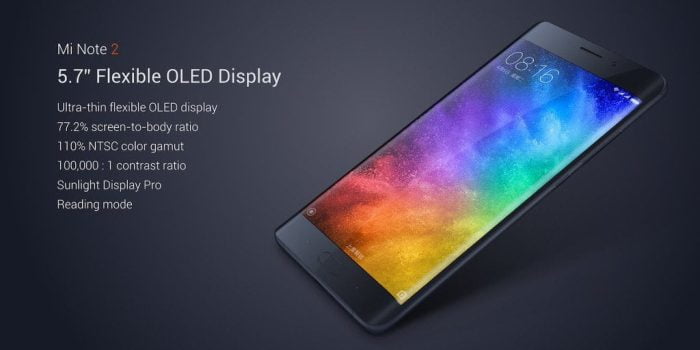 Inside, a clock is ticking Qualcomm Snapdragon 821 processor, The maximum clock rate of the 64bit quad core Processor is included 2.35GHz, The processor graphic is a Adreno GPU 530, With Qualcomms, currently the most powerful processor you are damn fast on the road. Multitasking and graphically challenging games will not be a problem for the Xiaomi Mi Note 2. The main memory is optional 4GB or 6GB (LPDDR4 RAM), The internal memory is depending on the model 64GB or 128GB (UFS 2.0), Unfortunately, the internal memory can not be extended additionally by means of an SD memory card. 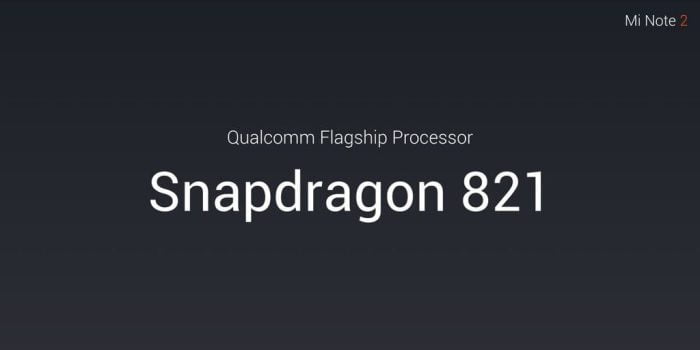 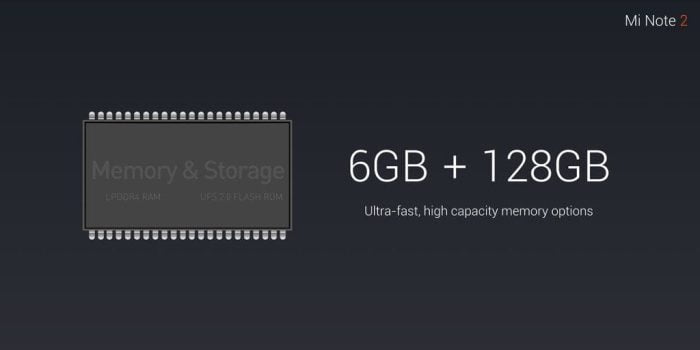 Xiaomi relies on one single 22.56 megapixel main camera and 8 megapixel front camera, The rumors that a dual camera system is used have therefore not come true. The main camera uses one Sony IMX318 image sensoramong others 4K videos with 30 pictures-per-second receives. A electronic image stabilization (EIS) with 3 axis gyroscope is available and can also be used to stabilize 4K video recordings. Furthermore, the main camera comes with a Autofocus (PDAF), One dual LED flash and a f / 2.0 aperture therefore. 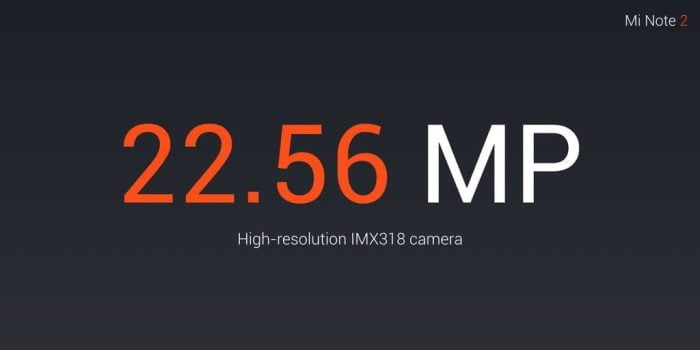 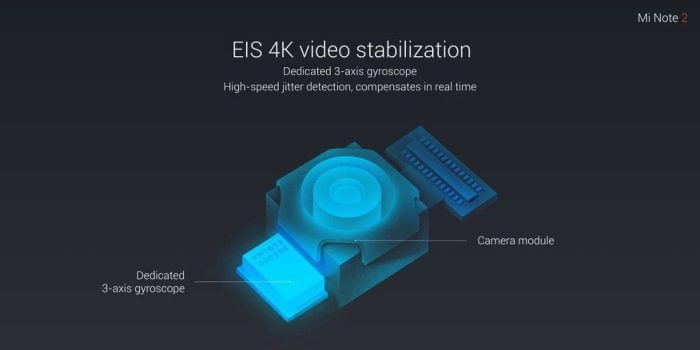 In the image sensor of front camera it is a Sony IMX268 with a f / 2.0 aperture, Also the front camera is with one Autofocus fitted. Of the "Beautify 3.0" Modus makes even more beautiful selfies. 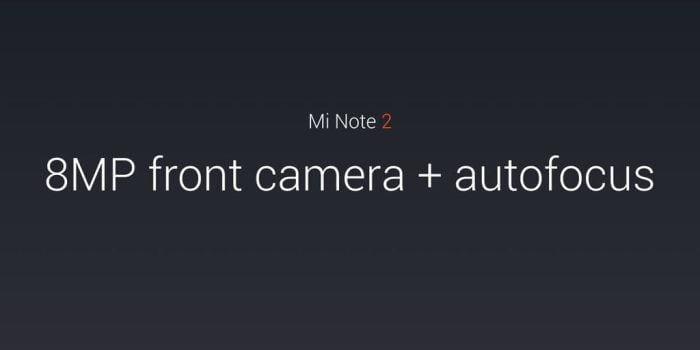 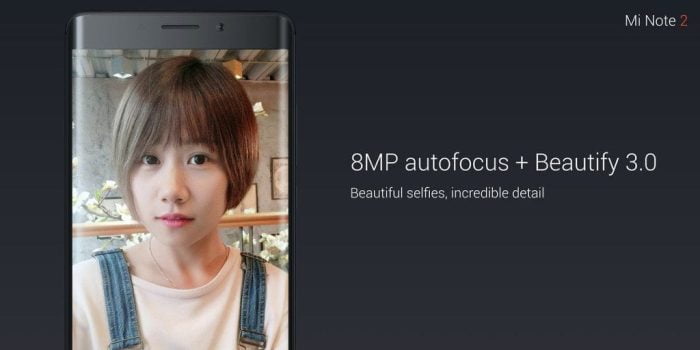 With the Snapdragon 821 SoC is also the Qualcomm AQSTIC chip therefore. This ensures a balanced HiFi sound with a 192kHz / 24bit decoding. NFC is supported. In addition to a read and write function, NFC cards can also be emulated. On Fingerprint scanner is located in the front-side home button.

For an even more accurate position determination ensures a Specially integrated GPS chipset, In addition, the Xiaomi Mi supports 2 Bluetooth 4.2 and dual band WiFi, The "Global" variant of the new Xiaomi high-end smartphone is to total 37 LTE tapes compatible and can thus be used worldwide. A Dual SIM function (2x Nano SIM) is available, but LTE is only supported on one slot.

The Capacity of the battery gives Xiaomi 4.070mAh at. Equipped with Qualcomm Quick Charge 3.0 the battery is already fully charged after a short time. 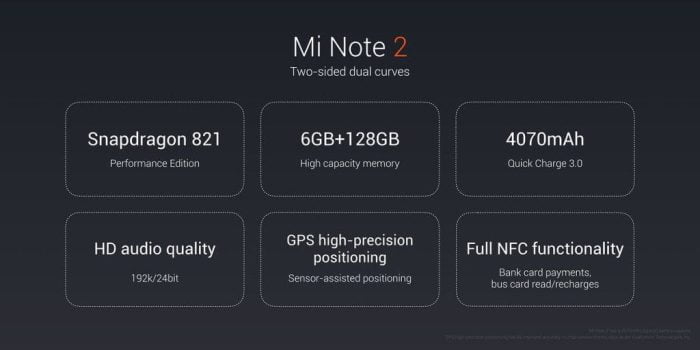 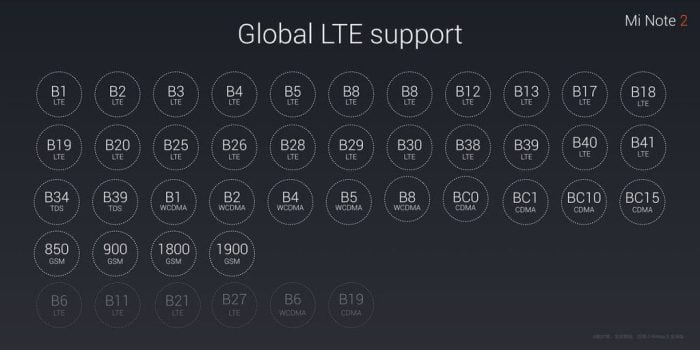