Xiaomi Mi 9 Global - All information about the flagship smartphone

by Timo24. February 2019
Xiaomi presents its new high-end Mi smartphone. The Xiaomi Mi 9 is a real eye-catcher, using the cutting-edge Snapdragon 855 System-on-Chip and offering an 48 megapixel triple camera that easily takes on the much more expensive competition.
Overview
Manufacturer/Model

Xiaomi had the new one earlier than expected Xiaomi Mi 9 flagship smartphone presented. Like the predecessor, the smartphone is in one Explorer, standard, and middle-class execution appeared. The differences between the Explorer edition and the standard model have significantly reduced Xiaomi this time. Only the transparent back and a higher storage capacity have remained. The middle-class model (Xiaomi Mi 9 SE) is visually oriented to the two high-end variants, but differs in terms of hardware equipment.

As expected, Xiaomi has the MWC 2019 Mi 9 Global presented. The hardware is identical to the Chinese Mi 9. Only the mobile bands were adapted for the international market. The price of the model with 6 + 64GB is 449€, The larger storage variant with 6 + 128GB kostet 499€, The smartphone can now be ordered in Spain and Italy. Unfortunately, an Explorer Edition was not announced. 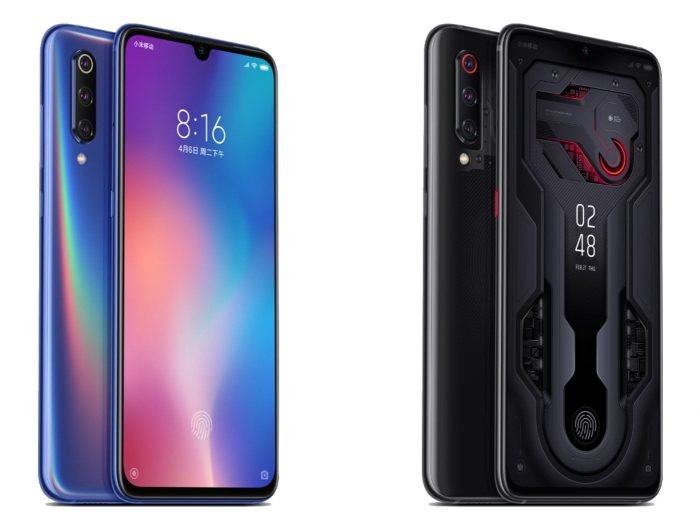 The Xiaomi Mi 9 follows the trend of Notch in the pot-look, Instead of a wide beam, there is only a tiny gap around the front camera. This leaves more room for the display, which continues from Type AMOLED is, but with full 6.39 inch even bigger. The resolution of the panel produced by Samsung is 2340 1080 x pixels, The display brightness reaches up to 600 cd / m²so that nothing stands in the way of readability in the sunshine. Another feature of the display is the support of HDR playback material. The color fidelity of the panel is based on DCI-P3 color space, The display is protected by hardened Corning Gorilla Glass 6, An anti-grease coating reduces unsightly streaks and fingerprints.

Various colors of the Xiaomi Mi 9

With Dimensions of 157.5 x 74.67 x 7.61 mm the smartphone is pleasantly slim. The weight is light 173 g, A real eye-catcher is the back of the Xiaomi Mi 9. In two holographic colors Available, the scratch-resistant glass back shimmers in different colors. In addition, the smartphone is available in plain black. Xiaomi renounces a backside fingerprint scanner. Instead, an optical fingerprint scanner was integrated directly into the display.

In a flagship smartphone belongs also high-end hardware. The built-in system-on-chip is the end 2018 introduced Qualcomm Snapdragon 855, The chip manufactured in the 7nm process consists among other things of a CPU with a total of 4 Kryo 485 Gold and other 4 Kryo 485 Silver processor cores. The cores are subdivided into a high-performance cluster, where a core clocks up to 2.84 GHz, a power cluster with 3 cores that clock up to 2.42 GHz, and an energy-saving cluster whose 4 cores clock with 1.8 GHz. In the AnTuTu-Benachmark, the Mi 9 achieves a superior score of more than 387.000 points. But even in everyday life, the smartphone is guaranteed to be no brake! 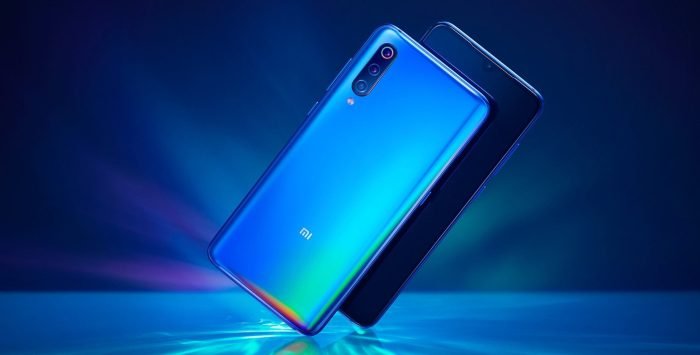 The processor graphic is the Adreno GPU 640which promises 630% more performance over the Snapdragon 845's Adreno 20. Current mobile games are guaranteed to be playable with this CPU and GPU combo. The can also be seen storage facilities. Das "Standard Model" offers one 8GB LPDDR4X 2133MHz dual-channel memory. The Explorer Edition puts on an even bigger one RAM 12GB, Regarding the data storage is the Xiaomi Mi 9 with a 128GB UFS2.1 (default) or 256GB UFS2.1 (Explorer) erhältlich. A memory extension is not possible!

Promising is the new one Triple camera of the Xiaomi Mi 9, In the first test reports (eg DxOMark 107 points), the main camera composed of a 48 megapixel Sony IMX586, a 12 megapixel Samsung S5K3M5 and a 16 MP Sony IMX481 image sensor puts the much more expensive competition in the shade.

The 48 Megapixel main sensor uses a f / 1.75 aperture and promises great shots even at night. The 12 megapixel second sensor uses an 2 optical zoom lens and allows lossless zooming. The 16 megapixel image sensor uses a f / 2.2 aperture and is equipped with a 117 ° wide angle, which can capture a much larger image area. A combination of Laser focus, PDAF (Phase detection) and CDAF (Contrast Detection) allows the main camera to focus instantly. What the main camera unfortunately misses is an optical image stabilizer (OIS)! 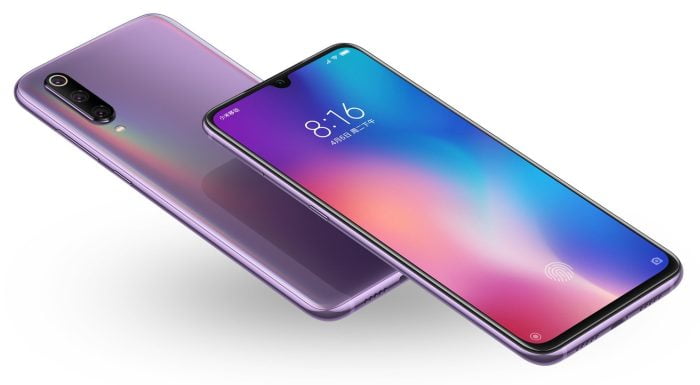 Again on board is the Artificial Intelligence (AI) camera function, This allows a dynamic bokeh effect, an image enhancement by scene detection, as well as the automatic recognition and translation of business cards, currencies and other texts. Videos takes the main camera with maximum 4K resolution up to 60 images-per-second on. Slow motion are Full HD with up to 960 pictures-per-second possible!

Prelude: The Chinese Xiaomi Mi 9 surprisingly does not support LTE band 20! A Xiaomi Mi 9 Global with extensive mobile support is expected to be announced on the MWC 2019. Also not available is the new 5G mobile standard. Here is an overview of the individual frequency bands of the Chinese model:

As Dual SIM smartphone The Mi 9 can be equipped with two Nano SIM cards. Each of the two slots is LTE-capable and suitable for VoLTE HD. For wireless data transmission is the smartphone with a Dual AC 2 × 2 MU-MIMO WiFi Module and a Bluetooth 5.0 module fitted. The bluetooth codecs AAC / LDAC / aptX / aptX-HD and the new aptX-adaptive codec are all available.

MIUI 10, dual GPS and others

The smartphone comes with MIUI 10, based on Android 9 Pie delivered. The operating system has been visually refurbished and expanded with numerous functions. For example, smart home devices can be controlled directly via the smartphone as well as there are interesting AI functions that make everyday life easier. An even more precise location and navigation allows Dual GPS, The other sensors include not only the conventional smartphone sensors but also a barometer and an infrared transmitter. NFC is available and can be used for mobile payment. On a 3.5 mm jack audio jack is omitted.

The capacity of the (non-exchangeable) Batteries gives Xiaomi 3300 mAh on. With the Quick Charge 4 + Fast Charge Standard (27 Watts) can the Xiaomi Mi 9 recharge in no time. Wireless charging is possible with up to 20 Watts.

From about 400 € you get with the Xiaomi Mi 9 a superbly equipped flagship smartphone. First reviews, such as the DxOMark camera test read themselves promising and place the Mi 9 even far above the competition of Apple or Samsung. What mostly criticize testers from the English-speaking world is the lack of watertightness, the lack of OIS and the meager support of mobile phones. At least in terms of mobile, there is hope. Xiaomi is expected to introduce a Xiaomi Mi 2019 Global at the MWC 9!

As soon as we get test copies of the two Xiaomi Mi 9 models, the detailed test reports will follow!

You want to know where to buy the Xiaomi Mi 9? In our price comparison we list the current offers of the most popular shops. All prices are checked and updated several times a day. Should a shop appear several times, it concerns the different warehouses of the dealer.

Hey Tobias, the smartphone has so far only been introduced for China, and in China LTE Band 20 is not common. But Xiaomi has already teased the launch of new models for the MWC. I'm pretty sure that there is a Global Mi 9 is presented with worldwide mobile support.

Thank you for your prompt reply. Then I will probably have to wait a few more days. Do you think the international model will come with 5G? LG Tobias

There is currently no information available.

The part is bought! Whether LTE band 20 or not. Had me at the time the Mi5 purchased without a band and am super 20 got away with it to make ends meet. H + is enough for me! The hardware at the price is unbeatable. At Samsung or Huawei I pay almost twice for it. I'm really looking forward to your test. Greetings Niklas