Xiaomi Mi 9 SE - All information about the mid-range smartphone

by Timo3th of June 2019
The Xiaomi Mi 9 SE is the budget-friendly model of the new Mi smartphone range. The smartphone orients itself in the main features of the big brother, but uses a slightly stripped down hardware. For just under € 300 you get a smartphone with Snapdragon 712 midrange system-on-chip, a 5.97 inch FHD + AMOLED display and a high-resolution 48 megapixel triple camera.
Overview
Manufacturer/Model

Xiaomi Mi 9 SE is now as well Global Version with extensive mobile phone support (including LTE Band 20) available. As one of the first shops has GearVita the global version of the Mi 9 SE available in the offer. For all interested parties we were provided with discount codes, which you use the 64GB model for only 249 € can buy. All further information can be found in the deal box. 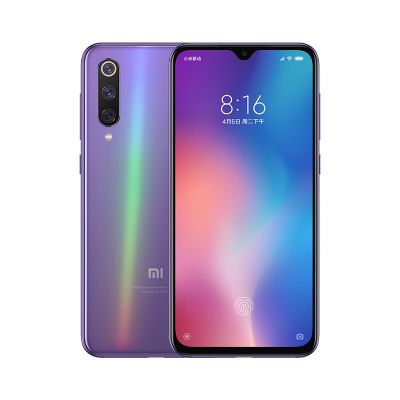 Xiaomi has at the 20. February not only that Xiaomi Mi 9but also the stripped down Xiaomi Mi 9 SE presented. The manufacturer wants to kill two flying with one stone and make the new Mi smartphone tasty for both the budget-conscious buyer, but also the high-end lover.

Visually, the Mi 9 SE is based largely on the high-end model. The smartphone coincides Dimensions of 147.5 x 70.5 x 7.45 mm and a weight of only 155 g a little more compact. The back is made of glass and is shimmering in the Colors blue, purple and gray available. Front design feature is one Drop Notchsurrounding the front camera. The fingerprint scanner is invisibly integrated into the lower part of the display.

The built-in display is on 5.97 inch Samsung AMOLED with 2340 x 1080 pixels Resolution. With rich 432 DPI you will not see any pixels with the naked eye. You can also see the display brightness, which Xiaomi uses with 600 cd / m². In sunshine, readability should not be affected. The dynamic contrast ratio is 60000: 1. Playback of HDR video is possible. The panel is protected by unbreakable and scratch-proof Corning Gorilla Glass 5, An anti-grease coating ensures better gliding and a largely clean display surface.

The built-in system-on-chip is that Qualcomm Snapdragon 712, which is to be assigned to the upper middle class. The Xiaomi Mi 9 SE is the first smartphone to use this early February 2019 featured chip. The chip is an evolution of the Snapdragon 2018 chip introduced in May 710 and is expected to close the performance gap between the current Snapdragon 600er and 800er series again. Compared to the Snapdragon 710, performance has been increased by 10%. Total 8 processor cores are divided into one Performance Cluster with 2 Kryo 360 Gold cores (2.3 GHz) and one Energy Saving Cluster consisting of 6 Kryo 360 Silver cores (1.7 GHz), The graphics unit is one Adreno GPU 616, with the current mobile games are fluently playable. In the AnTuTu benchmark, the SoC scored just above 180.000 points.

Regarding the memory puts the smartphone on one 6GB LPDDR4X 1866 MHz dual-channel memory and one optional 64GB or 128GB UFS2.1 data store, It is not possible to expand the memory using a MicroSD memory card.

As well as that Xiaomi Mi 9 the Mi 9 SE uses one Triple main camera, The sensor technology is still different to the high-end model. The main sensor is the 48 megapixel Sony IMX586 image sensor with f / 1.75 aperture. The second sensor with telephoto lens and f / 2.4 aperture is unspecified and only resolves with 8 megapixels. There is also no exact name for the third sensor with super wide angle. This resolves with 13 megapixels and uses a f / 2.4 aperture.

The functions of the main camera are largely identical to the big brother. So there are all sorts of things AI-frills, an 960 FPS slow motion mode (720p), a super night mode and various portrait modes. Videos captures the triple camera with maximum 4K resolution at 30 pictures-per-second. The front camera solve with 20 Megapixel and also relies on numerous AI functions (beauty filter).

First off: The Chinese Mi 9 SE surprisingly does not support LTE band 20! A Xiaomi Mi 9 SE Global with extensive mobile support is expected to be announced on the MWC 2019. There are a total of two nano-SIM slots available. Both slots are 4G LTE enabled and support VoLTE. Here is an overview of the individual frequency bands of the Chinese model:

Wireless is the Mi 9 SE with a Dual AC MU-MIMO WiFi module and a Bluetooth 5.0 module fitted. The bluetooth codecs AAC / LDAC / aptX / aptX-HD are available, the new one aptX adaptive codec is missing however. The operating system is MIUI 10 based on Android 9 Pie. In addition to the traditional smartphone sensors, the mobile device offers an infrared transmitter for controlling televisions. NFC is available and can be used for mobile payment. On a 3.5 mm jack audio jack is omitted. The capacity of the (non-exchangeable) Accumulator is 3070 mAh, It can be charged via USB-C with up to 17 watts. Wireless charging is not possible.

For nearly 300 € Xiaomi receives a well-equipped smartphone of the upper middle class. Especially the new Qualcomm Snapdragon 712 SoC and the lush memory promise a consistently fluid user experience. Unfortunately, this device also lacks the common LTE band 20, which is why you should be patient with an import. Xiaomi is expected to introduce a Xiaomi Mi 2019 SE Global to the MWC 9 that supports additional frequencies.

As soon as we get test copies of the Xiaomi Mi 9 SE, the detailed test reports will follow!

Xiaomi Mi 9 SE is available in blue, purple and gray available and costs with 64GB data storage almost 275 € (1999 yuan). The model 128GB memory costs converted 305€ (2299 yuan). The first import shops are expected to be able to offer the mobile device as of mid-March.

You want to know where to buy the Xiaomi Mi 9 SE? In our price comparison we list the current offers of the most popular shops. All prices are checked and updated several times a day. Should a shop appear several times, it concerns the different warehouses of the dealer.