by Timo4. December 2020
Xiaomi could already present the Xiaomi Mi 11 and Mi 11 Pro in December. Recently released leaks give insights into the design and possible specifications of the new Xiaomi upper class. We'll take a closer look at what is true of the rumors in the following article.

Shortly after the introduction of the new one Qualcomm Snapdragon 888 Xiaomi has announced that the new Mi 11 series will be equipped with Qualcomm's latest flagship SoC. A special feature of the Snapdragon 888 is the Cortex-X1 core, which is based on the Cortex-A78 predecessor and offers a further increase in CPU performance. The new one too Adreno GPU 660, is up to 35 percent faster in graphical calculations than the Adreno 650 predecessor.

Are these the specifications and prices of the new Xiaomi Mi 11 range?

An Leak on Weibo but would like to reveal further technical details. Accordingly, the Xiaomi Mi 11 and Mi 11 Pro could be equipped as follows:

The second leak gives insights into the design of the smartphone. The well-informed blogger reveals on Twitter Ice Universethat the new Xiaomi Mi 11 already end of December is presented and with a "Four-curved screen design", i.e. a display that is curved towards all edges. He underpins the leak with a photo of the alleged display glass. 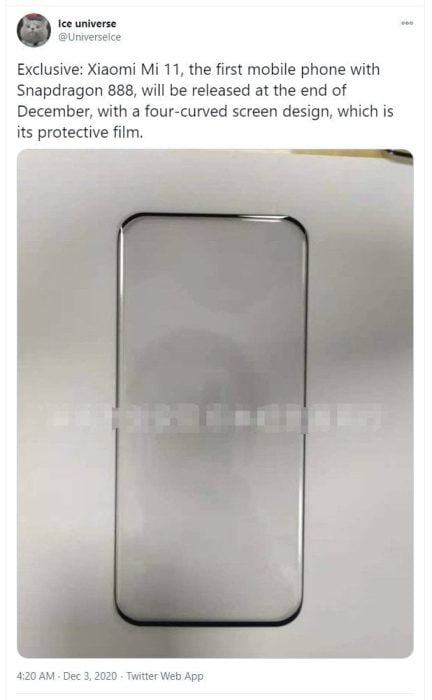 A leak found on Slashleaks would like to know more about the design of the back. What is striking is that square arrangement of the main camera. In addition, the Mi 11 would only be equipped with 3 camera sensors.

Based on these leaks, @BenGeskin made one render that shows the possible design in full bloom. What is really true about the rumors will perhaps be revealed by the end of December.