by Timo27. March 2020
Starting signal for the Xiaomi Mi 10 Series in Europe! Xiaomi is bringing the strong flagship smartphone with 5G connection and 108 MP camera to the western market. However, there is a bitter aftertaste for price-conscious buyers. With prices starting at 799 euros, the gap to the high-end competition shrinks significantly! All information about the Xiaomi Mi 10 Series is available in the following entry.

Xiaomi already presented the new Mi 10 Series in China in February. Now it is Europe's turn and can enjoy the high-end 5G smartphones. Of the pre sales starts on March. The actual Sales only on 07. April. The following prices are due depending on the storage equipment.

The Mi 10 Pro uses 6,67-inch curved AMOLED display with a resolution of 2.340 x 1.080 pixels. The high refresh rate of 90 Hz ensures that content is displayed particularly smoothly. The touchscreen works with a sampling rate of 180 Hz and recognizes touches in no time. The display brightness is also remarkable. With up to 1.120 cd / m², the display of the Mi 10 Pro is currently one of the brightest displays on the market.

There is a fingerprint scanner under the display and invisible to the eye. The screen protector is a hardened Gorilla Glass 5 branded glass. This is not only extremely scratch-resistant, but also shatterproof.

Snapdragon 865 and lots of storage

The Xiaomi Mi 10 Pro gets its performance from the Qualcomm Snapdragon 865 Mobile processor. The octa-core processor offers clock speeds of up to 2,84 GHz. The cores are divided into a total of 3 clusters, which become active as required. If the full performance of the smartphone is not required, only the economical 3 clusters become active. This protects the battery and ensures longer runtimes. Mobile gamers get thanks to the Adreno GPU 650 the full load of performance. No matter what current or future mobile game you want to play, the Mi 10 Pro has enough power reserves.

The memory configuration of the smartphone can also be seen. So there is the Mi 10 Pro with 8GB RAM and 256GB data storage. The most up-to-date storage types of type LPDDR5 and UFS3.0 are used. The smartphone is also excellently positioned in terms of connectivity. The Xiaomi Mi 10 Pro is 5G compatible, gets along with the new one Wi-Fi 6 Standard and offers an abundance of sensors as well NFC for contactless payment.

A highlight of the Mi 10 Pro is the camera system. A whole 4 cameras adorn the noble glass back. The main camera uses one 108 MP Samsung ISOCELL Bright HMX sensor with f / 1.69 aperture and optical image stabilization (OIS). The second sensor is an 8 MP sensor with a 10x zoom lens (hybrid), f / 2.0 aperture and optical image stabilization (OIS). The third sensor in the bundle is a 12 MP depth sensor, which is particularly suitable for portraits and ensures an excellent Boke effect. Finally, the Mi 10 Pro offers a 20 MP ultra wide-angle sensor with a 117 ° field of view and f / 2.2 aperture. The front camera has a resolution of 20 MP. 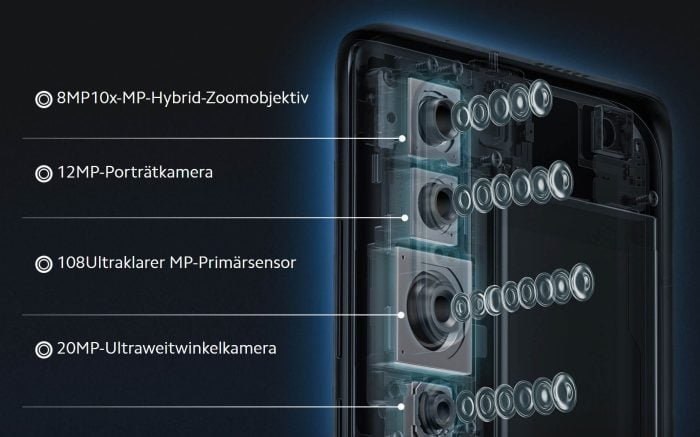 To tease that certain something out of the pictures, the Mi 10 Pro offers a wealth AI image enhancer. In addition to very classic effects such as HDR mode or night mode, there are also gadgets such as intelligent AI slimming, group photo facial correction, AI studio lighting and more. Video can be recorded in 8K. Particularly smooth 60 frames per second are possible up to the 4K recording mode. The Mi 10 Pro records slow-motion videos at up to 960 frames per second.

The 4.500 mAh battery can with up to 50 watts wired and with up to 30 watts contactless (Qi) getting charged. It is so fast that an empty battery is fully charged again after less than an hour. The quick charger required for this (65 watts) is already included in the scope of delivery. Conversely, the Mi 10 Pro is also able to charge other devices with 5 watts (10 watts CN version).

In addition to the Mi 10 Pro, there is also a slightly cheaper basic model. The differences are especially relevant for photo enthusiasts. The display and processor are identical on both models. There is a first difference in the storage equipment. The Mi 10 is also available with only 128GB of data storage. There is another difference with the battery. This is slightly larger at 4.780 mAh, but can only be charged with 30 watts.

The main difference is the main camera. The main sensor also has a resolution of 108 MP, but the sensors on the side are somewhat worse. You have to do without the zoom lens. Instead there is a 2 MP macro and a 2MP depth sensor. The ultra wide-angle sensor has a resolution of only 13 MP. The field of view is 123 °.

How do you find the Mi 10 Series and will you buy one of the devices? From there in the comments!

LOL, at Gearbest it is now in there for $ 719. Germany, France, Italy and Spain are excluded. They should pay the full price. This is really an outrageous pricing policy from Xiaomi.