The companies at a glance

On the one hand, we have Xiaomi, the electronics giant from China, which has gained worldwide fame in the last 5 years. Initially, Xiaomi was mainly known for inexpensive smartphones. In the meantime, the group has built up a diverse ecosystem of smart home products, household appliances, gadgets and other product categories.

Good quality at a fair price speaks in favor of Xiaomi. This can also be seen in the Xiaomi G9, which promises a lot at 179 euros and costs comparatively little.

Opposite is Dyson, a vacuum cleaner technology company that has been on the market since 1991. When thinking about cordless vacuum cleaners, you inevitably have to think of Dyson, because Dyson is one of the vacuum cleaner front-runners in Europe.

Advanced technologies, quality and service speak for Dyson. The company is paying for that too. At around 350 euros, the Dyson V8 Absolute + is almost twice as expensive as the Xiaomi G9.

Round 1: scope of delivery

The scope of delivery of the Xiaomi G9 is clear. The following parts are included:

The scope of delivery of the Dyson V8 Absolute + is a bit more extensive. Here are included:

In contrast to the Xiaomi G9, the scope of delivery of the Dyson V8 Absolute + includes an additional floor nozzle and an additional brush attachment. The crevice nozzle is also equipped with LED lighting.

The matt-white plastic parts of the Xiaomi G9 are superbly processed, look classy and feel pleasantly soft. The plug connections still close tightly even after they have been dismantled several times. 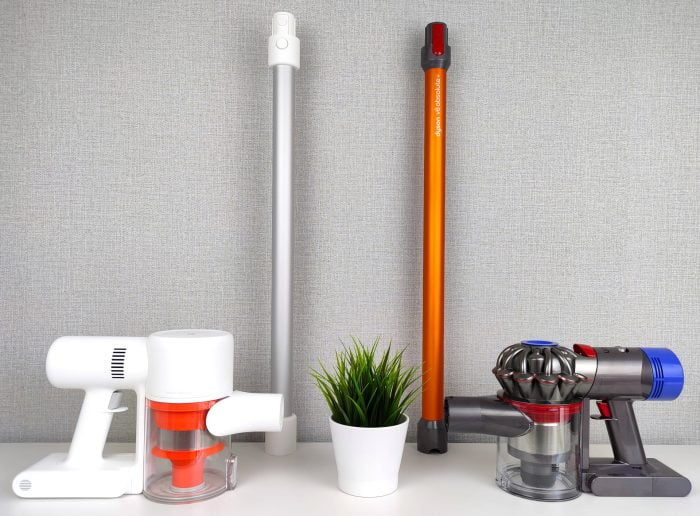 Both cordless vacuum cleaners get a point here! (1 - 2)

The operation of a cordless vacuum cleaner plays a major role. How does it fit in the hand and how agile is it when vacuuming? Where is the power switch located and do you have to keep it pressed down?

While vacuuming, you have to keep the power button pressed on both devices. You can change the suction level on the Xiaomi G9 using a slider at the end of the main element. The turbo of the Dyson V8 Absolute + is switched on via a slider on the top of the device.

Maneuverability is the main discipline of the Dyson V8 Absolute +! Point for the Dyson (1 - 3)

When it comes to suction power, the Xiaomi G9 and the Dyson V8 Absolute + are head-to-head. The suction power of the Xiaomi G9 is slightly higher on the data sheet (120 AirWatt vs. 115 AirWatt). In practice there are no noticeable differences. From fine dust to crumbs to hair, both cordless vacuum cleaners suck up dirt without any problems.

The additional floor nozzle of the Dyson doesn't make much difference either. Both devices vacuum on hard floors and carpets without any problems. The cordless vacuum cleaners even get along very well with deep pile.

The special V-shape of the Xiaomi G9 roller brush ensures that hair and carpet fringes are less likely to get caught in it. Long hair in particular is less likely to wrap around the brush and is easier to remove when cleaning.

Xiaomi has solved the individual suction levels better. Instead of two levels, there is an additional third suction level. For example, if you vacuum on carpets, the (more energy-saving) middle level is sufficient for the Xiaomi G9. With the Dyson V8 Absolute +, on the other hand, you have to switch to turbo, which brings the battery to its knees much faster. In terms of volume, the Xiaomi G9 is a bit quieter. Depending on the suction level, the volume fluctuates between 55 and 68 dB. The Dyson V8 Absolute + is audibly louder at 72 to 82 dB. Making calls on the side is no longer possible with either device.

An additional suction level and the quieter operation give the Xiaomi G9 the point! (2 - 3)

The drainage system on the Dyson V8 Absolute + works a little differently. Here you pull on a red lever on the top of the handheld vacuum cleaner. The filter system moves up, the flap opens at the bottom and the dirt falls out. The cleaning of the filter system is a little easier with the Xiaomi G9, since all filters can be separated from the device here. With the Dyson V8 Absolute +, the metal filter remains connected to the upper part of the housing.

Easy maintenance on both cordless vacuum cleaners. Everyone gets a point! (3 - 4)

Finally, let's take a look at the battery. The Xiaomi G9 comes with a replaceable 2500 mAh battery. An additional battery costs around 60 euros. Depending on the operating mode, the running time varies between 8 and 60 minutes. The battery is charged after 3,5 hours. The 2400 mAh battery of the Dyson V8 Absolute + is permanently installed and cannot be replaced! Here the running time varies between 7 and 40 minutes. The charging time is 5 hours.

The Xiaomi G9, on the other hand, scores in the essential characteristics of suction power and battery. In principle, the suction power is very similar in both models. However, the additional suction level and the quieter operation speak for the Xiaomi G9. In terms of battery, the Xiaomi G9 is clearly superior to the Dyson V8 Absolute +. The Dyson has to admit defeat to the longer running times, the interchangeability and the shorter loading times.

If you also take the price into account, the Xiaomi G9 offers the more attractive overall package!