by Timo15. January
The Vorke V2 Plus is a mini PC that focuses on performance. Supplied with Ubuntu 16.04, the mini-PC promises to be a suitable office companion. How the Vorke V2 Plus beats in practice and for which other areas of application it is suitable, more in this review!
Overview
Manufacturer/Model

Vorke is a Chinese company that focuses on powerful, among others Mini-PCs and TV boxes specializes. The Vorke Mini PCs are regularly equipped with the latest Intel processor hardware, which supports both Windows and Linux as the operating system. After looking at the October 2017 already Vorke V1 Plus closer look, followed a few months later the Vorke V2 Plus.

In contrast to the previous model, the Vorke V2 Plus not only has a decent hardware upgradebut also a complete one design upgrade experience. The rectangular and anthracite-colored housing of the mini-PC comes along Dimensions of 129 x 124 x 39 mm extremely compact.

The housing frame is made of one piece and consists of Metal, Front and back are each different connection options, The front is included two USB 3.0 sockets, a USB-C socket and a 3.5 mm jack audio jack Provided. On the back are one RJ45 jack with Gigabit connection, One HDMI 1.4a socket, two USB 2.0 sockets, the Netzteilbuchse and an Anti-theft Kensington-Lock, The respective frame sides are equipped with ventilation slots. 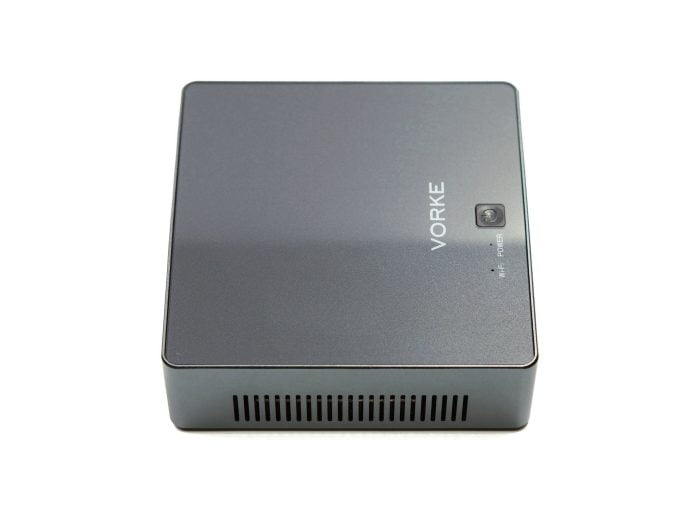 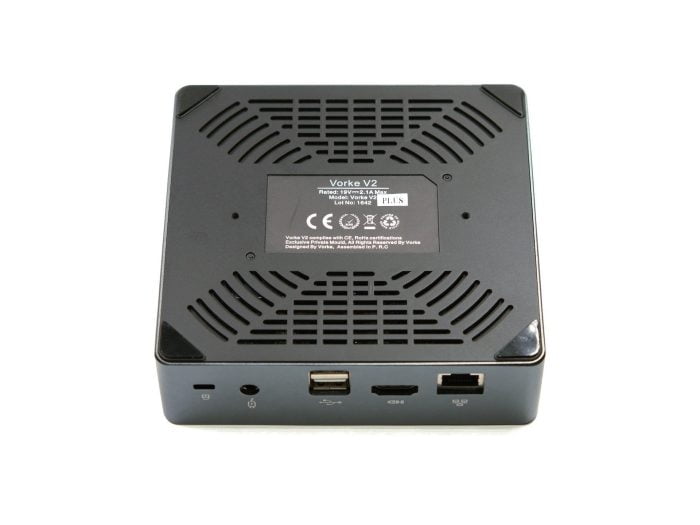 The top is with a well-fitting and transparent acrylic cover provided, creating a visually shimmering depth effect. Other features of the top are the manufacturer logo, the power button and two Note LEDs labeled "WiFi" and "Power" are inscribed. 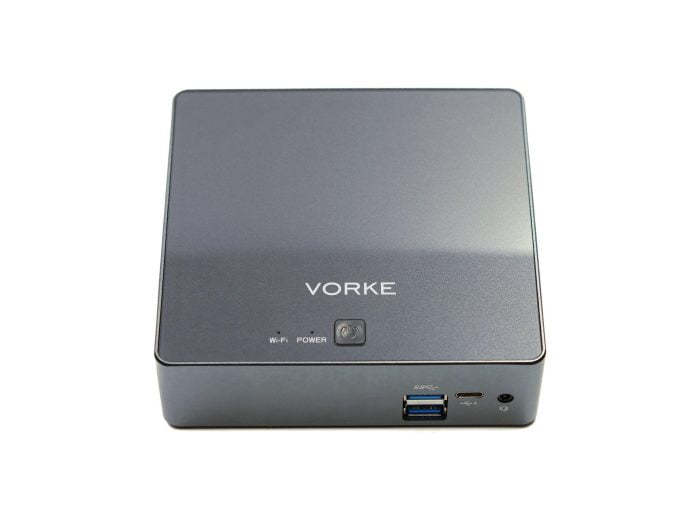 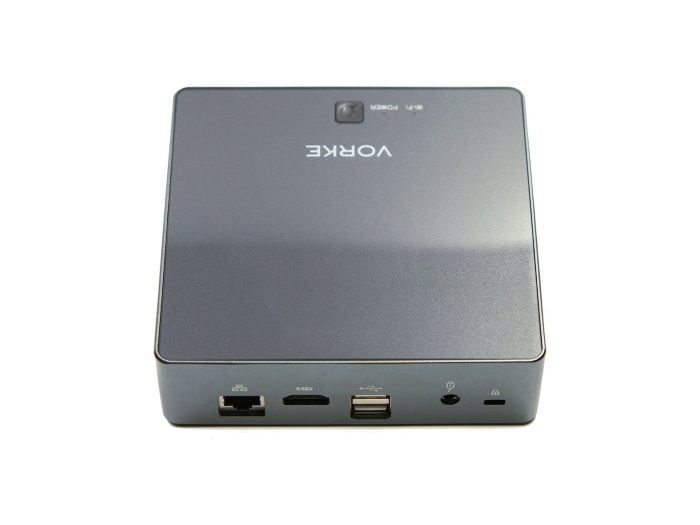 underside is the Vorke V2 Plus completely rubberized and in the respective corners with non-slip rubber pads Provided. The bottom of 4 screws, which are located under the rubber pads, is held. If you want to access the hardware, you first have to remove the self-adhesive rubber pads! A hole for attaching a VESA adapter plate already exists.

Even before unpacking the Vorke V2 Plus caused confusion. On the packaging, which lists all the specifications of the device on the back, there was nothing at all about a "plus model" and also the specifications did not match the expected device. Vorke has just taken over the packaging of the standard model, without making any adjustments. Although it turned out that the Plus model is included after all, such a faux pas from the manufacturer is not exactly a confidence-inspiring one.

The What's in the box includes the Vorke V2 Plus Mini PC, Power supply including power cable, One VESA adapter plate including 6 screws and English manual, In contrast to many other products from China, which are usually delivered with cheap and unchecked power supplies, this comes here Power supply unit from Delta Electronics Inc., is TÜV-tested, has the GS mark and complies with European directives, Also the included Power cable with 3-pin cloverleaf plug and SchuKo plug convinced qualitatively.

The quality of workmanship of the Vorke V2 Plus and the supplied accessories is not objectionable. The case leaves an overall high-quality impression. All sockets are firmly in place.

The mini PC can with Windows and Linux operate. Unlike the previous model, the Vorke V2 Plus is not with a pre-installed and activated Windows 10, but with Ubuntu 16.04 delivered. If you turn on the mini-PC, you will be greeted by an already established Ubuntu 16.04 operating system. Various Office programs, such as LibreOffice are already preinstalled. If you want to install a different operating system, it works the same as with any conventional desktop PC. The supplied quick guide provides sufficient information.

It is a good idea to replace the already preinstalled Ubuntu 16.04 with a new installation or another operating system. The preinstalled Ubuntu 16.04 had user accounts with unrecognizable passwords. Although the password-protected user accounts on the Recovery mode with root access However, it is not known to what extent the operating system has been modified in any other way. 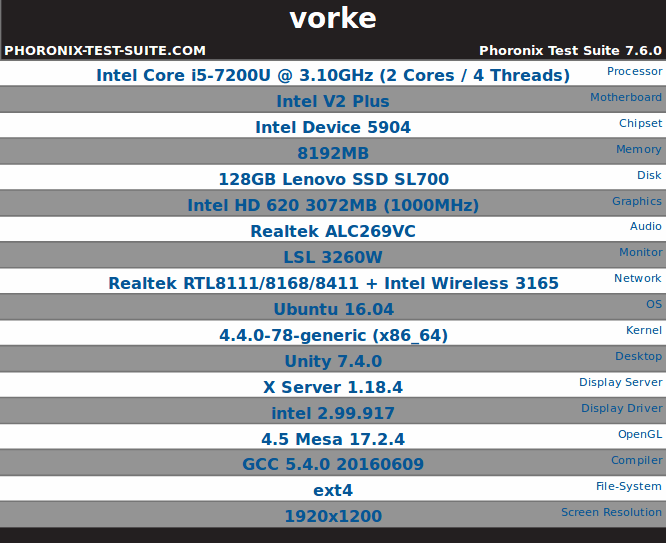 To access the hardware you only need a screwdriver. You do not have to worry about breaking a warranty when opening the Mini-PC. It is even intended to replace the memory if necessary.

The Intel Core i5-7200U is one, in 3. Quarter 2016 appeared and on the Intel Kaby Lake architecture based Dual-core processor, which is mainly used in notebooks and ultrabooks. in the basic clock reaches the processor Clock rates of 2.5 GHz. Turbo are even 3.1 GHz possible. Hyper-Threading is supported with 4 concurrent threads. The Thermal Design Power (TDP) gives Intel with 15 Watt at. The processor graphics is a Intel HD Graphics 620, A dedicated graphics unit, the mini-PC has not installed.

During the test phase, I mainly used the Vorke V2 Plus as an extra workstation. Conventional office work, the mini PC is easily grown. Working with LibreOffice, GIMP and surfing the web a little did not pose a problem in the test. Applications are opened quickly and even working with multiple open applications does not sweat the system too fast.

Under normal working conditions the mini PC works barely audible, The achieved core temperature is included on average 55 ° C, Under full load, however, so-called occurs quite quickly "Thermal Throttling" to the fore. The processor performance is reduced according to the core temperature. In the case of the Vorke V2 Plus, the processor performance is already reduced at 75 ° C by about 19 percent. The measured under full load high was 80 ° C. 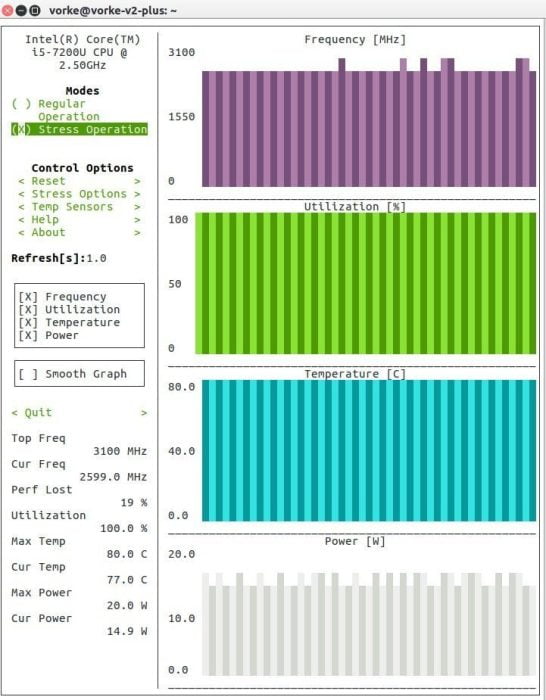 The Read and write speed of the Lenovo SL700 M.2 SSD correspond to those with SATA3 interface. The write speed reached average in the test 523 MB / s, The measured reading speed was at average 533 MB / s, The above USB achieved speeds correspond to the possible of the respective standards. On Transcend Extreme-Speed ​​JetFlash 780 USB 3.0 Stick with 64GB storage capacity was for example with 190 MB / s described and with 120 MB / s read. The throughput of the installed PC3L-12800S-11-11-FP DDR3 RAM-Moduls was about 8.600 MB / s. 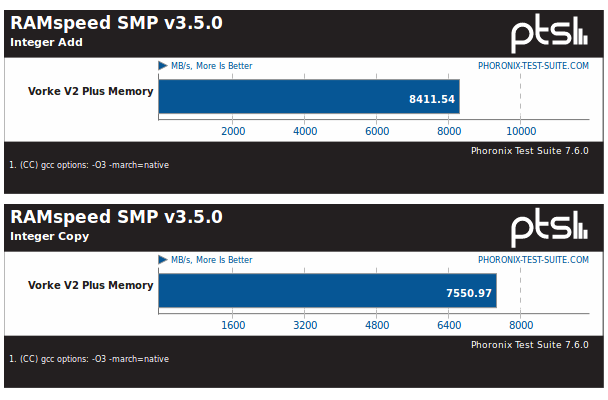 At the Gamingtauglichkeit of the mini PC one should not put particularly high expectations. Especially not if you continue to leave Ubuntu on the system and does not switch to Windows 10. The Vorke V2 Plus was tested among other things with current Mesa 17.2.8 graphics library.

Games like Counter-Strike: Global Offensive (CS: GO) run at low resolution and with low graphics settings at average 25 FPS, Although this is enough to be able to play reasonably smoothly, individual picture collapses are not excluded. Older games run smoothly on the system. Switching to Windows 10 would most likely result in better graphics performance. Comparable notebooks with Intel Core i5 7200U processor and the included Intel HD Graphics 620 show that even current, but not too demanding games, such as Dota 2 or the aforementioned CS: GO are quite smooth and playable without picture collapses.

The Vorke V2 Plus is less of a home theater mini PC than a practical (consumer) workstation. Although the mini PC is quite capable too 4K video footage to play smoothly and H.265 / HEVC on the hardware level to decode, but the computer is missing essential home theater functions, the predecessor, the Vorke V1 Plus were still available. Among other things, only the HDMI 1.4a standard supported. Although an 4K video signal can be transmitted, 4K with 60 pictures per second and HDR are only possible from HDMI 2.0 or 2.0a. Alternatively would have to on the USB-C Socket can be used, which can also transmit a 4K 60 Hz video signal with the appropriate adapter. Furthermore, one is missing IR receiverwhy no IR remote control can be connected to the controller. Last but not least, the Mini-PC lacks the possibility to transmit digital audio signals. A S / PDIF Socket is not available, for example. The equipment here is limited to a conventional 3.5 mm jack audio jack.

Wireless Module carries the name Intel Wireless AC 3165, Exactly the same module was already used in the Vorke V1 Plus. With 2.4 GHz and 5 GHz networks the network module gets along well. The theoretical maximum speed is included 433 Mbps, At the same time Bluetooth with version 4.2 unterstützt.

Both in the 2.4 GHz and 5 GHz network, the Mini-PC delivers acceptable results. The signal strength and data throughput were convincing in the test. As already at the Vorke V1 Plus, the data throughput is significantly reduced as soon as the Mini PC and the Access Point are not in the same room. Especially 4K streaming could be problematic. The signal quality via Bluetooth is not objectionable. The average range of 10 meters is no problem for the Mini PC.

The Vorke V2 Plus is a economical mini PCwhose power consumption is comparable to a conventional notebook. If one uses the system mainly for not too demanding Office work, lies the Power consumption at about 13 watts, If the system is additionally heavily loaded, such as by gaming, values ​​of approximately 30 Watt reached.

The Vorke V2 Plus is a powerful mini-PC that lives up to the previously released and approved Vorke V1 Plus. Nevertheless, the new model takes a slightly different approach. Instead of using Windows 10, Ubuntu 16.04 is being used, and even home theater capability has been reduced rather than eliminated by omitting various features such as support for the HDMI 2.0 standard. The Vorke V2 Plus is much more than a workable (consumer) workstation that can handle just about any office work. In everyday life, the system provides enough power and thus allows a largely fluid operation. Even one or the other game, although not too demanding, is quite fluently playable on this mini-PC. So if you are looking for current notebook hardware in the form of a compact mini-PC, you should consider the Vorke V2 Plus!

Hello, a few days ago I bought the good piece. I am so very satisfied. only I had nowhere to find a password for the user root. so I can hardly do anything with it. in addition, there is an entry in the bootmenu with dos / windows 3.1. This can not be started. as I understand it dos / wiondows3.1 is not installed.

Hi Daniel, I would throw down the installed Ubuntu 16.04 in your place and carry out a new installation. You can also use the recovery mode to start the root shell and change the passwords. Why Vorke does not reveal the passwords I do not know. The meaning behind the Dos / Windows3.1 entry, I did not quite understand.

Thank you Timo! I deleted the system and installed my own system.

Hello Daniel,
how did you install the Vorke V2 Plus Windows?
Unfortunately, I always receive error messages ????