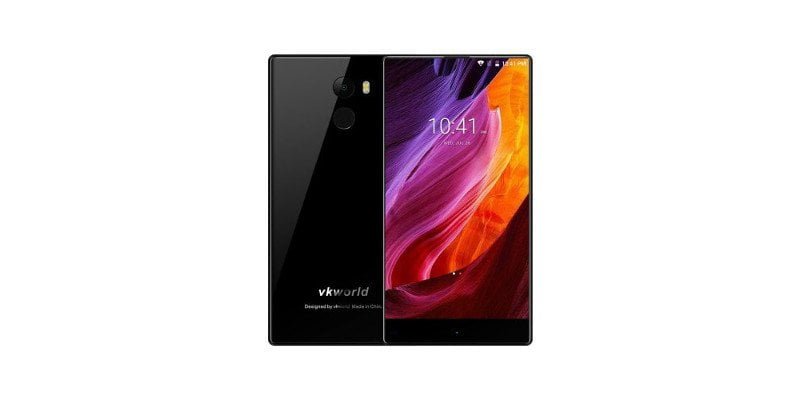 by Timo7. August 2017
The VKWorld Mix Plus is another China smartphone, in the style of the Xiaomi Mi Mix. With a retail price of around 100 €, it costs only a fraction of the high-end Xiaomi counterpart.
Overview
Manufacturer/Model

Producers of so-called China smartphones are known to follow every small trend in the world of smartphones and implement it more or less well. Currently there are so-called "Tri-bezel-less" smartphones In line with the trend and every little smartphone maker wants to get a piece of the cake. Decisive was the end 2016 published Xiaomi Mi Mixthat started the trend. Meanwhile, manufacturers such as DOOGEE, UMIDIGI and Bluboo followed the trend. With the rather unknown company "VKWorld" joins another manufacturer. The VKWorld Mix Plus is mainly attributable to the low-budget sector.

The smartphone uses a 5.5 inch large display of type IPSthat after the so-called In-cell technology is made. Due to the "in-cell" technology, the actual IPS panel and the touch panel are connected without additional layers. Theoretically, this makes it possible to produce slimmer panels, which at the same time allow a higher light transmission. The resolution of the display used here is enclosed 1280 720 x pixels, resulting in a point density of 267 DPI. Both the glass front and the glass back of the Mix Plus are made Corning Gorilla Glass, in an unspecified version.

As a "tri-bezel-less" smartphone, the front of the device consists largely of the 5.5 inch display. Only below the display is the usual frame section containing the front camera and the proximity sensor. VKWorld speaks of one Screen-to-body ratio from 90%. In fact, this value is only 79%, which can be understood with some math based on the case size of 143 × 74 × 7.9 mm and the display diagonal. Also of the "borderless" promise you should not be fooled. So far no "tri-bezel-less" without visible display borders has appeared!

Typically low budget, the Mix Plus is also equipped with a processor from the low price segment. Of the MediaTek MTK6737 is a system-on-chip with 4 Cortex ARM-A53 cores and an ARM Mali-T720 GPU. Furthermore, the system supports LTE with the most common frequency bands in this country, GPS Compass, Bluetooth 4.0 and WiFi with the protocols 802.11a / b / g / n. On the part of the memory are the system 3GB large memory and an expandable 32GB large flash memory to the side.

Many manufacturers mainly focus on the camera equipment. Anders VKWorld, the Mix Plus with a 8 Megapixel single-sensor main camera have equipped. For closer type designation of the image sensor, the manufacturer is silent. Of course, given the price and the camera equipment are not too high requirements. However, it is interesting that VKWorld is bidding not to use a dual camera system with the slogan "One is better than Two". This means that the main camera of the Mix Plus, despite the single-sensor is also able to "Bokeh" effect to create. The front camera resolves natively with 5 megapixels.

Further features are a Fingerprint scannerwhich is located on the back and below the main camera, as well as a Gravity sensor and an Proximity sensor, The capacity of the Batteries is at 2.850 mAh.

The VKWorld Mix Plus is an almost-borderless smartphone for the small budget. Considering the price, it is necessary to compromise on the processor and camera equipment. Also, the battery is not very large with only 2.850 mAh in a 5.5 inch device. You just get a smartphone that is equipped according to the price, to which you also not too high expectations may put. The smartphone is in the Colors "Deep Gray" and "Purplish Blue" and can now be imported via the online dealer GearBest. If a test copy reaches us, the test report follows at this point!

You are also interested in other fast-rimless smartphones? Then take a look at our articles UMIDIGI Crystal, DOOGEE MIX, Maze Alpha or Bluboo S1 !