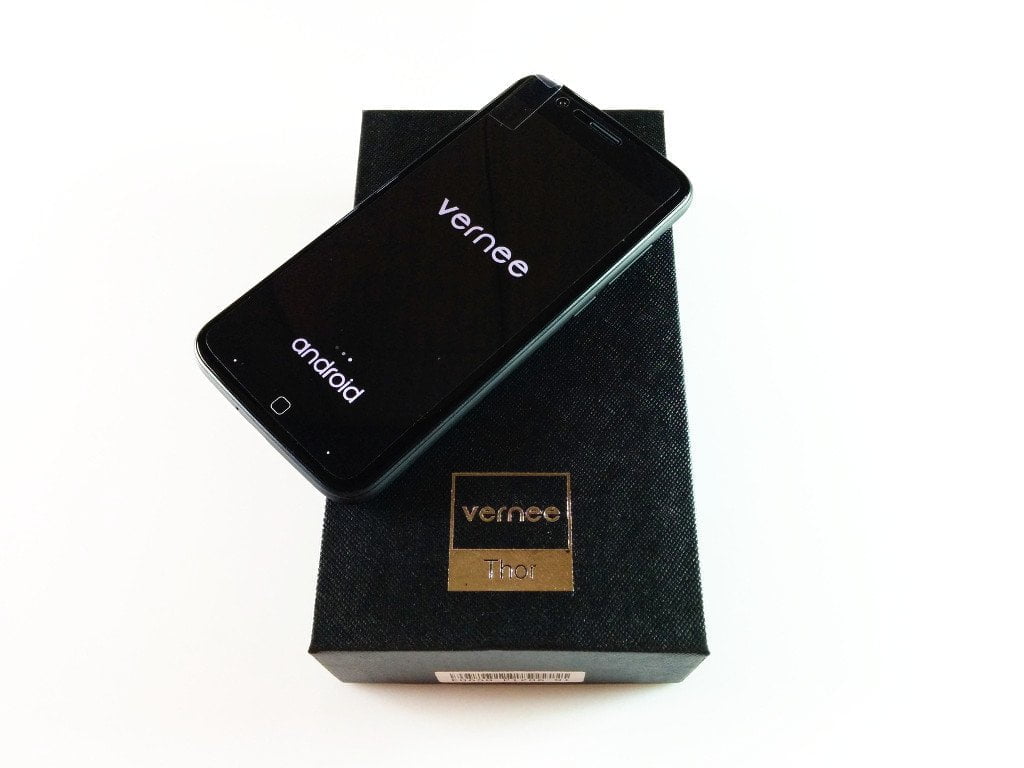 First impression to the Vernee Thor

First of all: I tested the smartphone with the current ROM "thor_20160623235053". With this version many bugs have already been fixed, which is why my test report may differ from older reviews.

The Vernee Thor is delivered in a typical smartphone box which, in addition to the smartphone, also includes a quick charger (5V 2A), a USB data or charging cable and a multilingual user manual. A screen protector was carefully applied to the smartphone's display at the factory. Surprisingly, an “UBER” promo sticker was also included with the smartphone. Why the manufacturer includes something like this in the scope of delivery, more on that later. 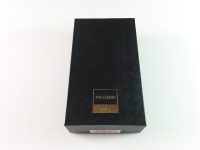 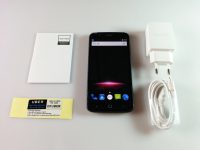 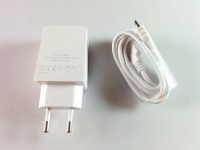 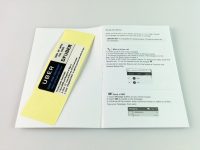 The smartphone has a total of two physical control buttons. The power button and the volume rocker are located on the right side of the case. Three more capacitive buttons are located below the 5-inch display. Although these are not illuminated, they come into their own thanks to the white coloring.

The micro USB socket for data transfer or for charging the smartphone is located on the lower edge of the housing. The microphone is also to the left. On the back, the Vernee Thor has a fingerprint scanner and a 13 megapixel main camera with LED flash.

My first impression of this device is very positive. The workmanship is good and the design is also appealing. 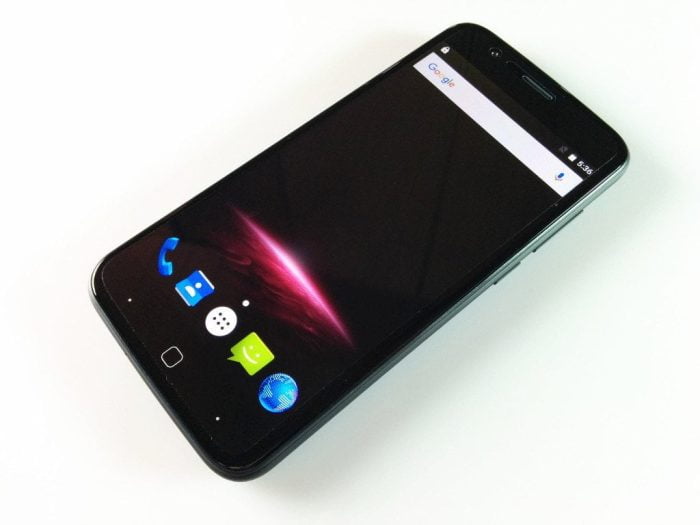 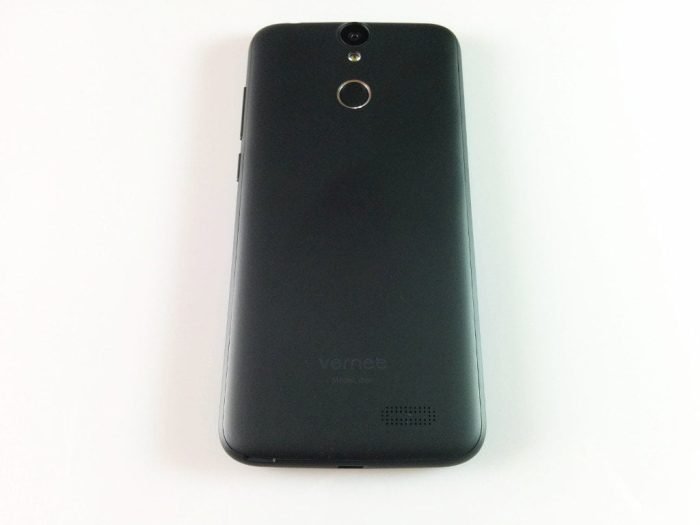 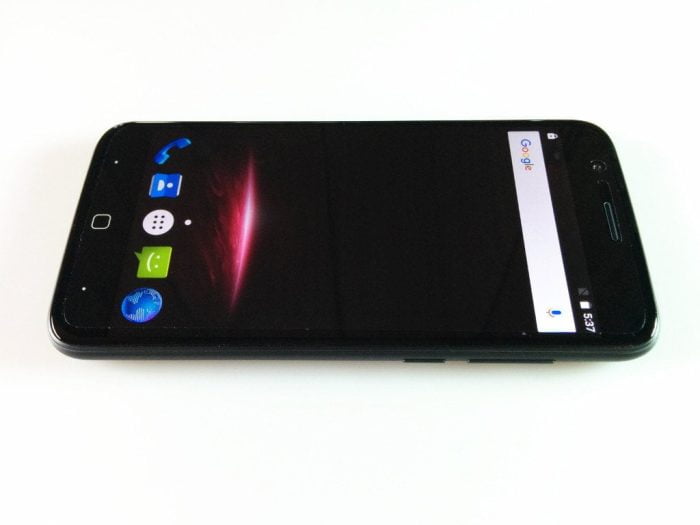 The display diagonal of the Vernee Thor is 5 inches. The resolution is 1280 × 720 pixels with a point density of 294 PPI. Individual pixels can only be seen if you look very closely. The display is protected by scratch-resistant and shatterproof Gorilla Glass 3 from Corning.

The Vernee Thor succeeds in color rendering well. The colors look strong and the black value is rich. The viewing angle stability is also impressive. Even from a very high viewing angle, the display remains easy to read and the color representation also remains constant. The maximum display brightness could be a bit more intense for my taste. The display of the Vernee Thor is already comparatively bright, but I had occasional problems reading the display accurately in direct sunlight.

If you do not like the color rendering, the sharpness or the contrast of the device, you can adjust the presentation of the display individually afterwards under the setting item "MiraVision". You can also choose between two predefined profiles. The multi-touch compatibility is 5 fingers.

The Vernee Thor uses a MediaTek MT6753 64bit Octa-Core SoC that clocks at 1.3GHz. In terms of RAM, this smartphone has a lot to offer, because with 3GB RAM this low budget device is comparatively lavishly equipped. The internal memory is 16GB and can be expanded by a further 128GB with a micro SD memory card.

In everyday life, the Vernee Thor can convince with its smooth operability. The Android 6 Marshmallow supplied with the device runs smoothly and multitasking is no problem for this smartphone. Apps open quickly, the browser renders quickly and files can be accessed in no time. Only compute-intensive games can become a problem for this device. The Mali T720 GPU copes well with common applications, but if you want to play graphically demanding games, you either have to forego graphical detail or look for a current smartphone with a Helio SoC. 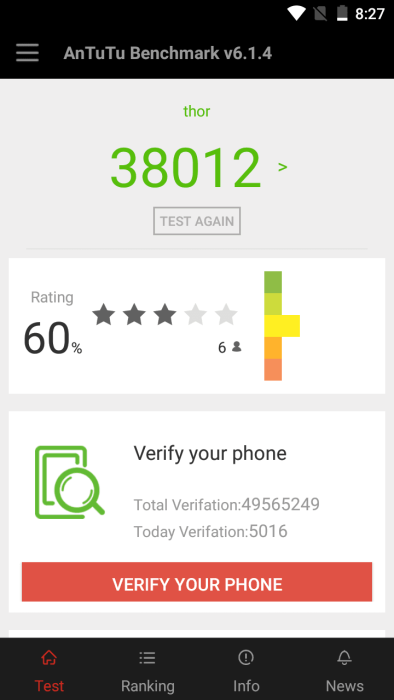 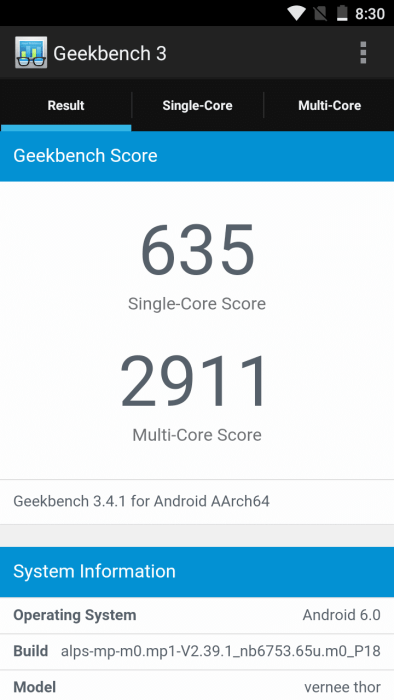 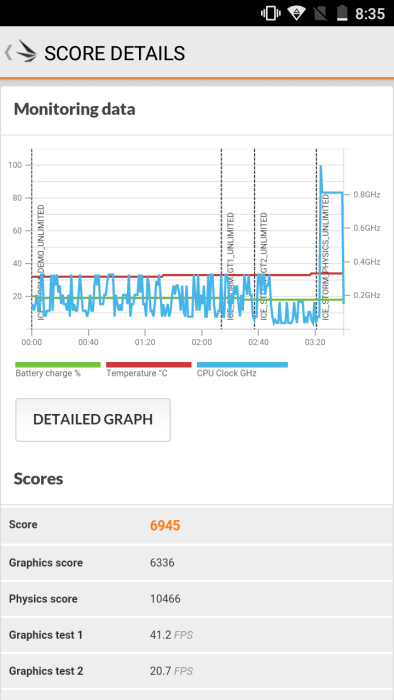 The Vernee Thor is delivered with Android 6 Marshmallow. The system is largely based on Stock Android, ie the user interface was not defaced by any theme and can be measured against the "original Android". The settings were only slightly expanded. You can find the “MiraVision” already mentioned above, or the “Turbo Download” mode here.

What immediately catches the eye, however, is the pre-installed "UBER" app. Due to a cooperation with the controversial driver service, this app was also preinstalled in addition to the UBER sticker already mentioned. This is not permanently integrated into the system and can be uninstalled via the app menu. There is no further "bloatware" on the smartphone. A scan with various virus scanners also turned out negative.

The manufacturer's update policy is also interesting. Since the Vernee Thor was released, several updates have been released that have eliminated most of the bugs. To what extent “Vernee” maintains this rhythm is questionable. Updates can be installed OTA (Over The Air) on the device. As soon as a new version is available, you will receive a notification directly on your smartphone.

Little is known about the cameras of the Vernee Thor, but the recordings are quite impressive for a device from the low-price segment. The main camera has a total of 13 megapixels. The f-number is f / 2.0. The manufacturer of the image sensor and the "real" native resolution are not known.

The recordings convince with their strong color representation. The image noise can be assessed as very low. However, the image noise increases depending on the lighting conditions. Taking pictures in the dark is quite good with the LED flash. Although no powerful, dual LED flash was installed, the power of the flash is sufficient. The release time in particular is in need of improvement. It takes a comparatively long time for the main camera of the Vernee Thor to trigger. The autofocus also works a little slowly, but accurately.

There is also little information about the front camera. The maximum resolution is 5 megapixels. Recordings with the front camera are too pale for my taste. Image noise can also be clearly seen. 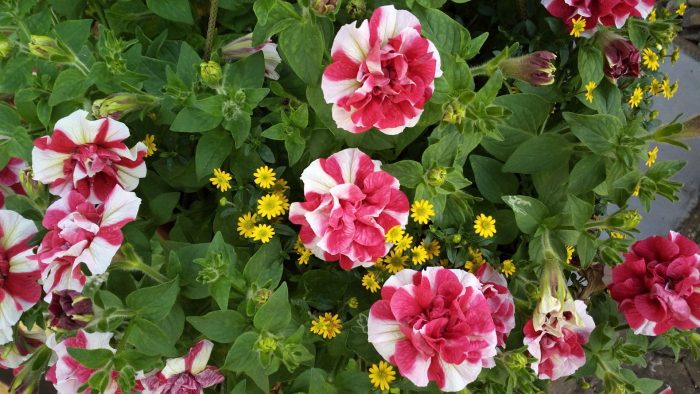 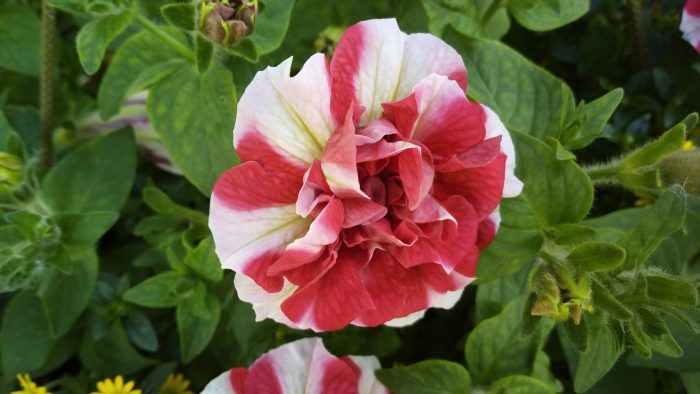 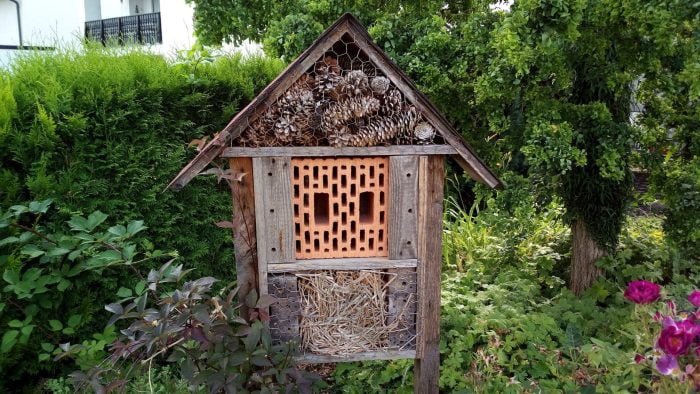 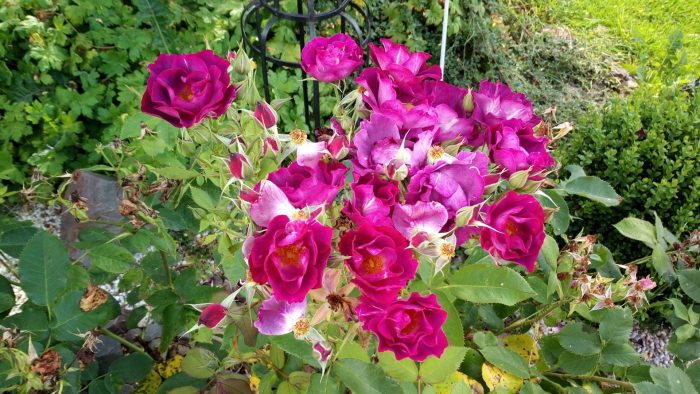 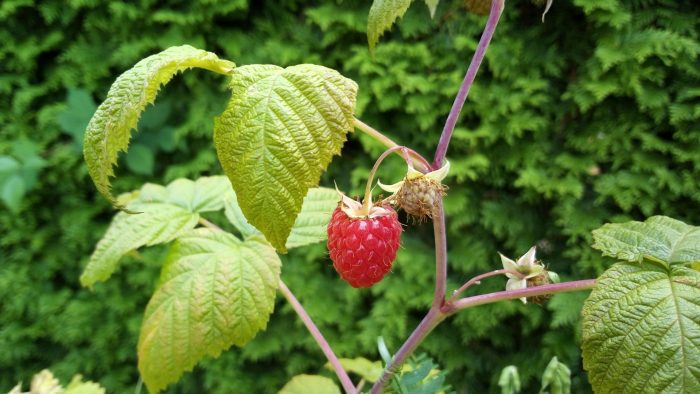 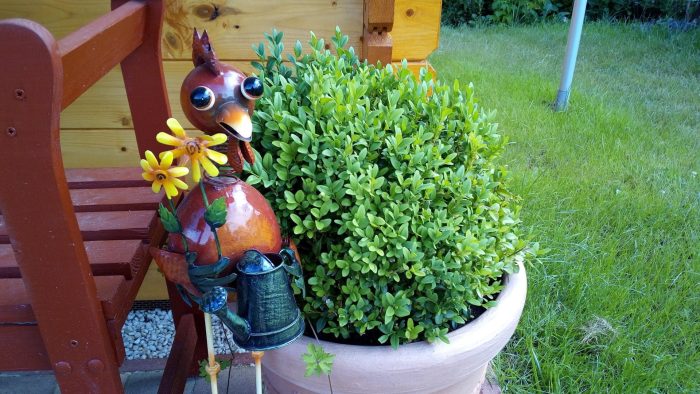 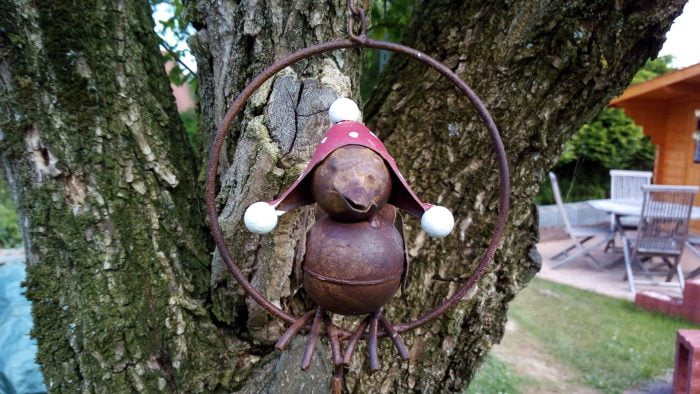 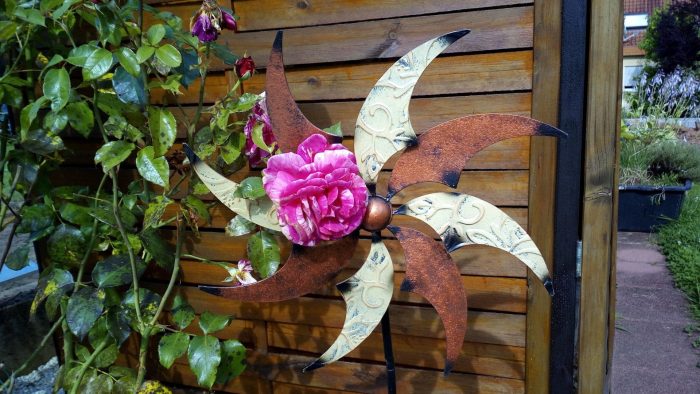 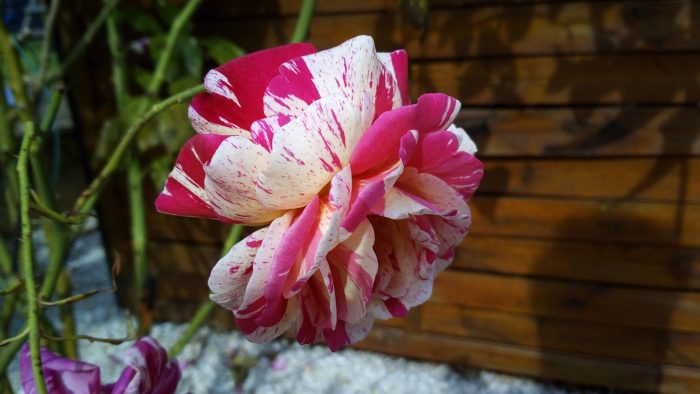 A fingerprint scanner is no longer uncommon for a low budget smartphone. The Vernee Thor's scanner can be described as a nice bonus, but it wasn't really convincing in the test. Different finger profiles can be saved quickly. Unlocking the device with the finger was much more of a torture in the course of the test. The finger must be meticulously placed on the scanner. Even the slightest slanting of the finger was not accepted. The unlocking time could also be improved. 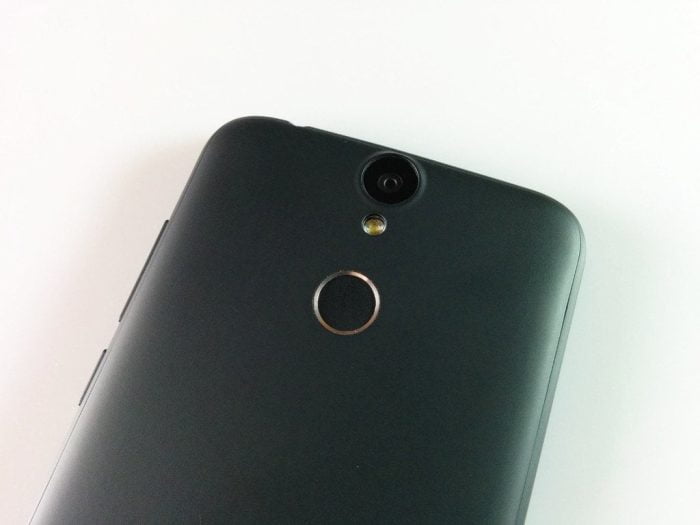 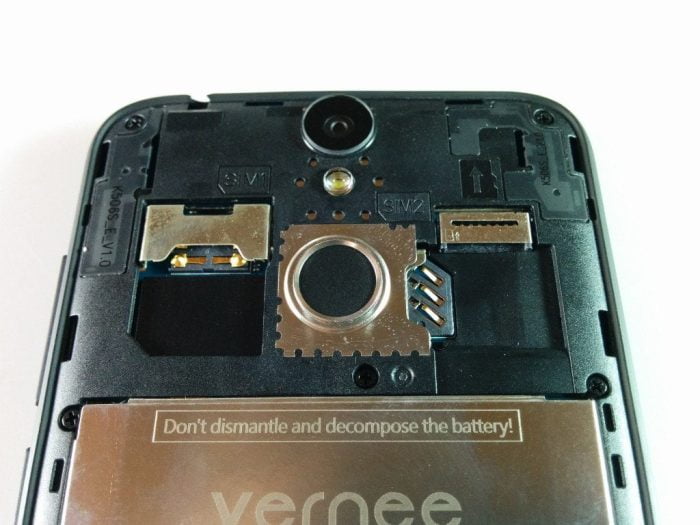 The Vernee Thor supports both 2G, 3G and 4G. All LTE bands used in this country are available. The call quality is good. I was able to understand my interlocutors very well during the test phase, which lasted several weeks, and I was understood very well. The reception quality is average. The Vernee Thor can also transfer data over the cellular network.

The GPS fix was found within a few seconds and overall the GPS works exactly. Even within urban areas, I could navigate easily. The sensors are an approach sensor, an acceleration sensor and a brightness sensor. A gyroscope or even an e-compass were not installed. 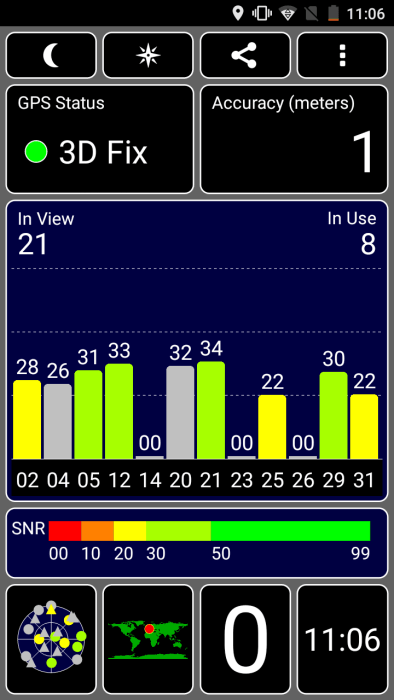 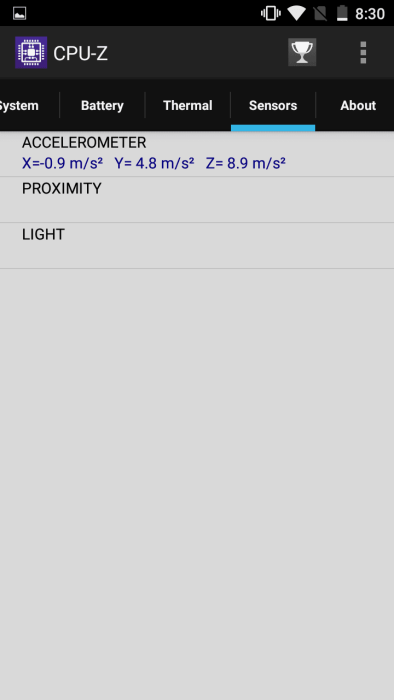 According to the manufacturer, the battery has a capacity of 2800mAh. With a USB multimeter I was able to understand this value (2736mAh), but the charging current is much lower than expected. A 5V, 2A charger is included in the scope of delivery. The maximum charging current was only 0.95A during the test. The Vernee Thor was only fully charged after more than 3 hours.

The runtime, however, is good. With normal everyday use, the smartphone only had to be recharged after about 36 hours. The Vernee Thor consumes very little battery, especially in standby, which speaks for a very well coordinated system. 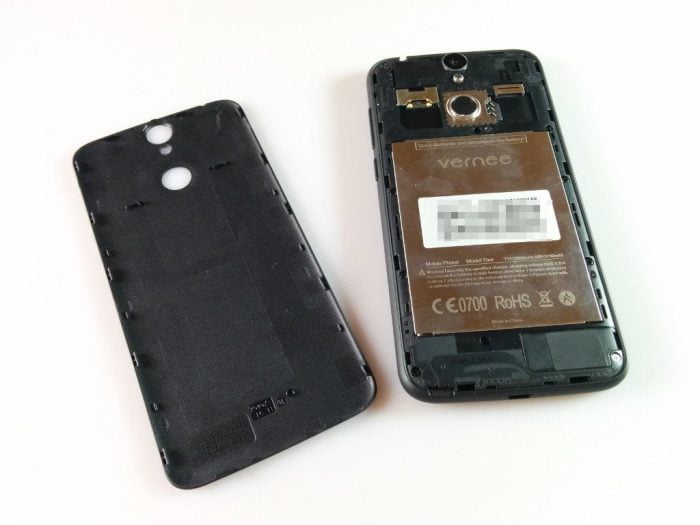 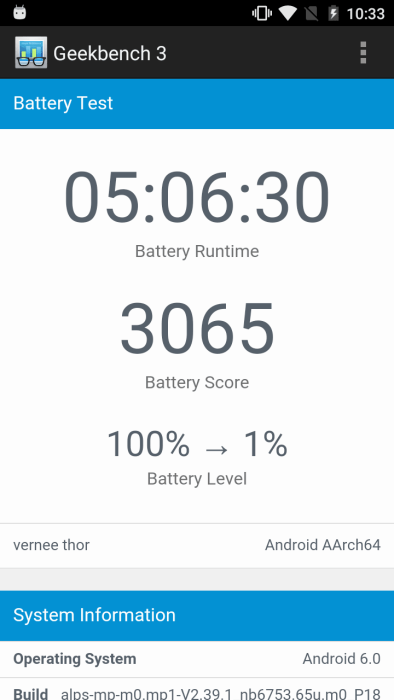 The Vernee Thor offers excellent value for money. The smartphone offers a solid hardware with optimally tuned operating system. The distribution is good and also the design is more than appealing due to the used Silktouch surface.

The display impresses with its good color representation and high viewing angle stability. Only the maximum display brightness could be improved. The main camera shoots noise-free and colorful images. The front camera is suitable for video calls, but it is too weak for usable selfies. The battery and the preinstalled Android 6 harmonize and enable a very good battery life. The lack of a fast-charge option is to be criticized.

With the Vernee Thor, the Chinese manufacturer "Vernee" had a decent debut. You can already look forward to the mid-range model "Vernee Apollo Lite"! 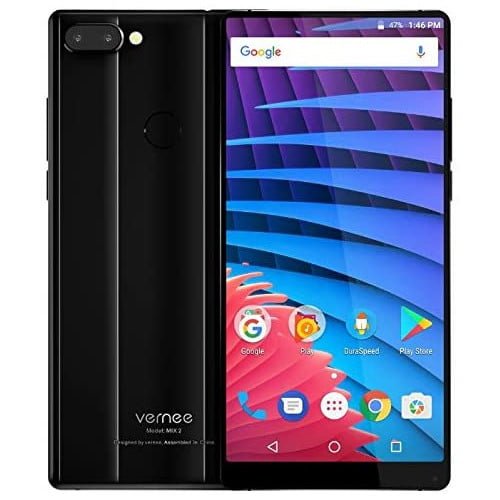 The Vernee Mix 2 has the two in its name, but is the first "tri-bezel-less" smartphone from the Chinese smartphone manufacturer "Vernee". In a ...