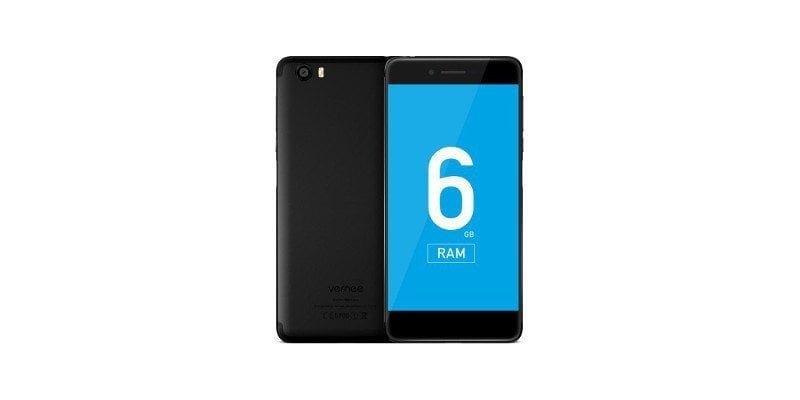 by Timo27th of June 2017
The "Vernee Mars Pro" is the successor to the late 2016 released midrange smartphone "Vernee Mars". What innovations the smartphone brings with it, we take a closer look in this post!
Overview
Manufacturer/Model

Vernee is a comparatively young smartphone maker, in addition to the low budget ments Thor Models and the high-end ments Apollo Series, only since the end of 2016 with the so-called Vernee Mars series introduced a middle class. The Vernee Mars Pro is the second Mid-range smartphone This series, which hardly has anything new to its predecessor on the outside, but has much better hardware under its hood.

The case of the Vernee Mars Pro is completely made of metal and reaches one Thickness of just 0.76 cm, The dimensions are included 15.10 x 7.40 x 0.76 cm and a weight of light 161 g, The rounded casing edges and the so-called 2.5D Curved Glass On the one hand, they make for a more attractive appearance, while at the same time providing a better feel. The outer bezel (Bezel) is according to Vernee just once 1 mm. The display is made by the "Japan Dislay Inc." (JDI) and is a so-called In-Cell Display with Touch and Display Driver Integration (TDDI), Such a display is characterized by a thinner panel, lower production costs and better performance. The display triggers at a diagonal of 5.5 inches in Full HD (1920 x 1080 pixels) on. The panel is protected by Corning Gorilla Glass 3. 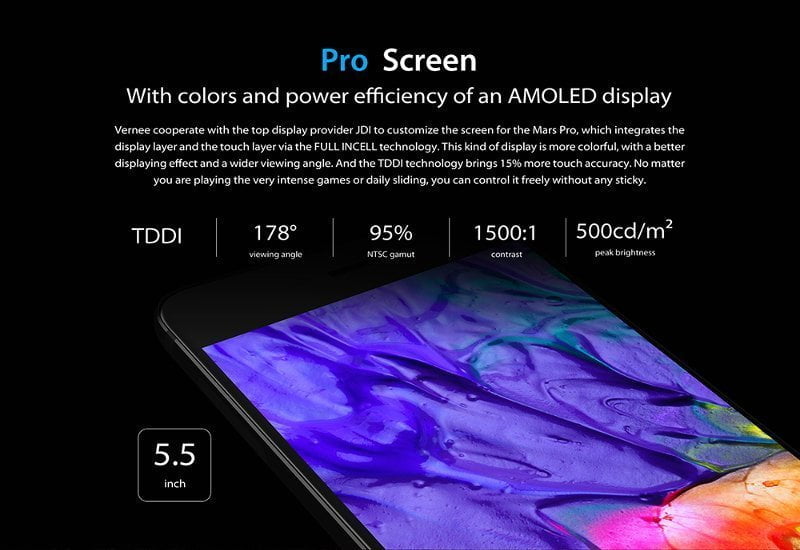 As a system-on-chip is MediaTek's mid-range SoC "Helio P25" installed. Overall, 2 clusters, each consisting of 4 ARM-A53 cores, ensure sufficiently fast and, at the same time, energy-efficient operation. The memory equipment amounts to one 6GB large LPDDR4X memory and one 64GB large eMMC5.1 flash memory, Above all, Vernee expects a better multitasking performance due to the large and fast memory. The internal memory can also be extended by means of a Micro SD memory card. Because of the so-called "Hybrid slots", a memory extension is only possible at the expense of the dual SIM function. 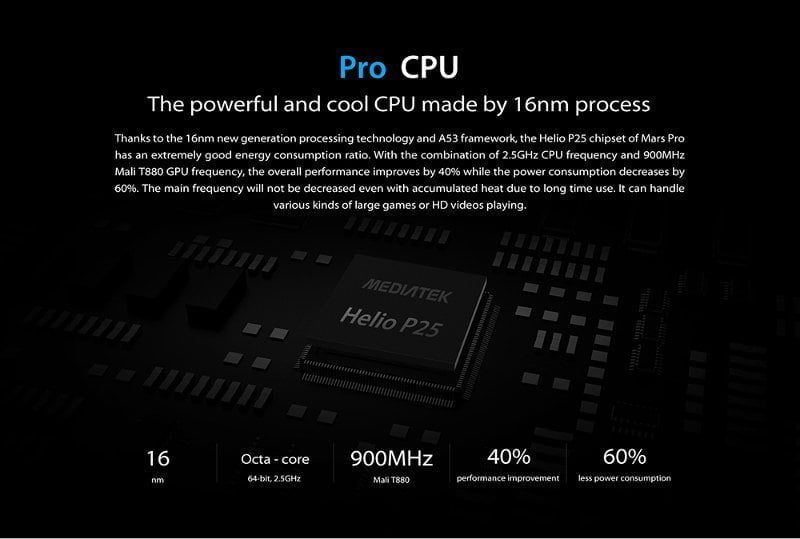 Unlike most current smartphones, the Vernee Mars Pro camera does not use a dual camera as the main camera, but a conventional one Single-Camera, The image sensor amounts to one 13 megapixel Sony IMX258 image sensor, which was already installed in the predecessor and also in many other China smartphones, such as the Xiaomi Redmi 4 models, installed. At Vernee Mars, the main camera was less convincing, though the sensor has some potential. Whether the manufacturer has better adapted the main camera of the Vernee Mars Pro on the software side, will have to show. Supportive are the main camera, among others Dual tone LED flash and an Phase Detection Autofocus (PDAF) to the side. The front camera resolves with 5 megapixels. Again, there are probably no differences to its predecessor. 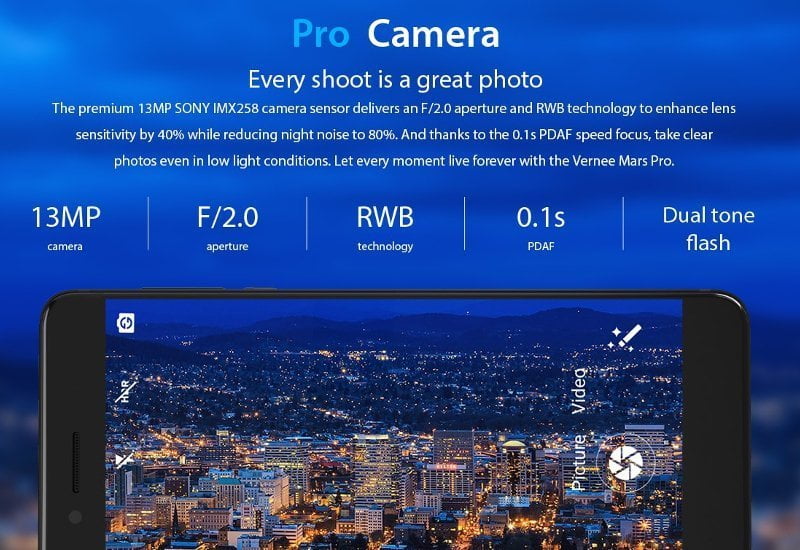 Particularly interesting is the placement of the fingerprint sensor. Usually this is either on the back of a smartphone, or below the display. As with Vernee Mars, the manufacturer also has the Mars Pro Fingerprint sensor on the side of the housing frame placed. Of course, the contact surface is noticeably smaller, but even the predecessor showed that the unusual placement of the fingerprint sensor causes no disadvantage in the recognition rate. Furthermore promises Vernee Unlock times below 0.1 seconds, One 360 ° detection and Learning ability of the sensor. 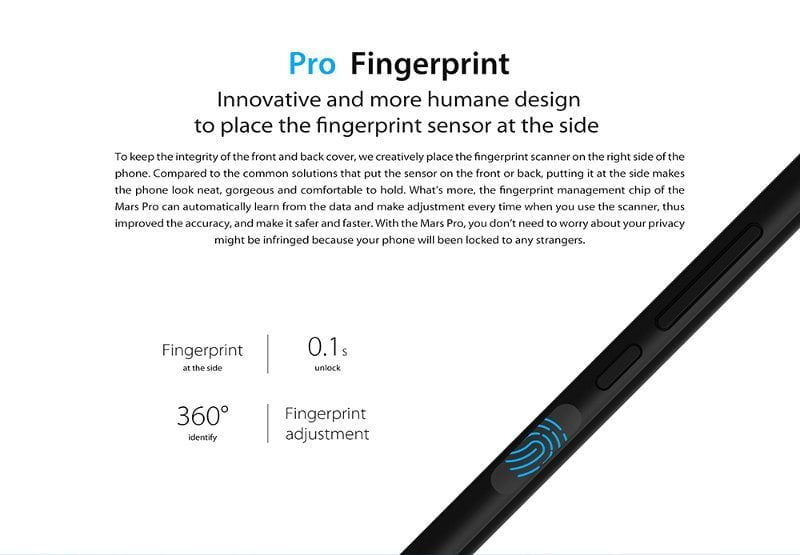 The Vernee Mars Pro is a Dual SIM smartphone and supports all in this country usual 2G, 3G and 4G frequency bands, Single Band WiFi with the protocols 802.11a / b / g / n and Bluetooth 4.0 available. The sensory equipment amounts to one Ambient Light Sensor, one E-Compass, one Gravity sensor, gyroscope, one Hall Sensor and one Accelerometer, The physical connectivity amounts to one USB-C socket and one 3.5 mm audio connection, The battery has a capacity of 3500 mAh, Software already running on the smartphone already Android 7.0 with adapted "VOS" user interface. 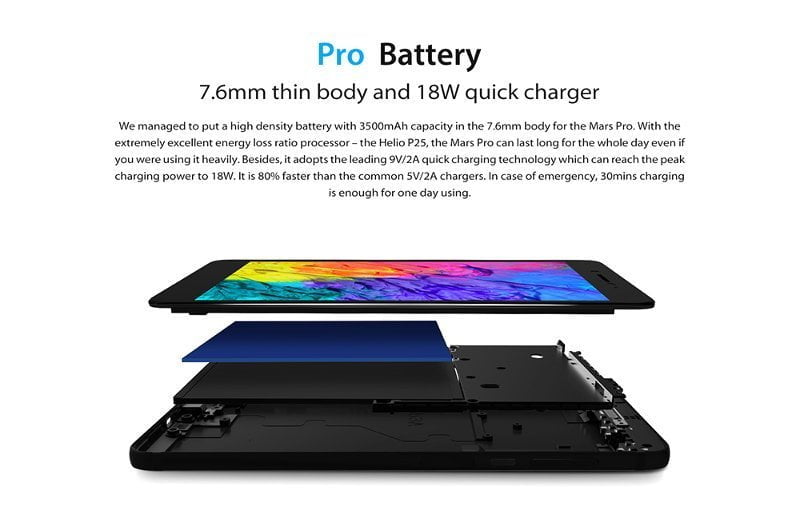