by Timo22. February 2018
At least since January it is known that Vernee will present the Vernee Apollo 2018 at the MWC 2. The equipment should amount among other things to a powerful MediaTek Helio X30 processor. First details about the design and the further equipment leaked already before the official publication!
Overview
Manufacturer/Model

Already since the beginning of last year, it is clear that Vernee a Apollo 2 smartphone in planning. Although already at the MWC 2017 a first prototype with MediaTek Helio X30 processor was already out and a possible sales start was supposed to take place already in May, the last few months have been quiet about the Apollo successor. to MWC 2018 Vernee once again brought the Vernee Apollo 2 with them. Even before the official presentation, the smartphone is already in Gear assortment by GearBest surfaced, why is expected to start selling soon.

Below we refer to the pre-published data, which serve as a guide until the official presentation of the smartphone. With the presentation on the MWC 2018 the contribution is supplemented accordingly!

The design of last year's prototype is history. Judging by the first teasers, Vernee relies on a slim, almost-borderless smartphone with a simple front. Following the current trend, the Apollo 2 will be equipped with a 6 inch display Be equipped with the first information 2160 1080 x pixels dissolves. Accordingly, there is a Aspect ratio of 18: 9, The upper and lower distances between the display and the frame are extremely low, which is why the home button of the prototype has disappeared. In terms of case materials, the smartphone will be made of metal and available in black and red.

Equipped with a powerful MediaTek Helio X30 processorAlthough the Vernee Apollo 2 is no longer the first smartphone to use this system-on-chip, it would still be one of the few China smartphones to use this processor. So far only the Meizu Pro 7 (Plus) with Helio X30 SoC has been released. The system-on-chip made in the 10 nm process consists of a total of 10 processor cores (Deca-Core), For a more efficient working, the cores are in total 3 cluster divided up. The clusters are made up of one performance clusterconsisting of two ARM Cortex-A73 cores with 2.6 GHz clock rate, one working cluster with four ARM Cortex-A53 cores (2.2GHz) and one Power Save Cluster with four ARM Cortex-A35 cores (1.9 GHz) together. Compared to a Helio X20 SoC, the Helio X30 promises an additional performance of 35% and a simultaneous reduced power consumption of 50%. In terms of performance, the Helio X30 promises a decent everyday performance, even if it can not keep up with the current competition from Qualcomm from a benchmark perspective.

For graphical applications, especially mobile games, the system-on-chip is a IMG PowerVR 7XTP-MT4 GPU fitted. The storage facilities The Vernee Apollo 2 is first and foremost on a 6GB DDR4X memory and a 128GB flash memory. It is not yet known if Vernee will choose a UFS 2.1 or eMMC5.1 memory. A memory expansion via MicroSD memory card will be possible. 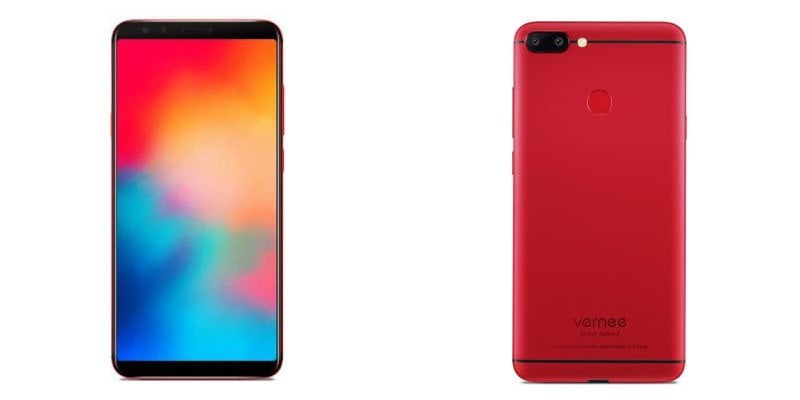 The back main camera will be out of one dual camera system consist. Of the main sensor should with 16 Megapixel resolve that auxiliary sensor again with 13 Megapixel, More is not yet known about the main camera. The front camera based on one 8 Megapixel Image sensor. It could be interesting Accumulator become. This should according to the GearBest product listing a Capacity of 5000 mAh Offer. The charging socket is from the Type USB-C.

Im Mobile the Apollo 2 is supposed to support the 2G, 3G and 4G mobile bands that are common in this country. The SIM slot is a so-called "Hybrid Slot"which can be equipped with two Nano SIM cards or alternatively with a Nano SIM and a MicroSD memory card. A back Fingerprint scanner is available. As Operating system should be with the delivery already Android 8 on the smartphone.