by Timo23. May 2016
The Eyes4u Security System is a smart alarm system with extensive app support. In addition to a WiFi module, the control unit also has the option of notifying the occupant via GSM. In the test, I took a closer look at the alarm system including the individual modules.
Overview
Manufacturer/Model

The Vcare alarm system was delivered well and safely packed. The additionally included sensor units were each individually packaged. In addition to the control unit, the package also included an IP indoor camera with Pan & Tilt function, 4 remote controls, 4 PIR motion detectors, 5 window sensors, an SOS unit and a unit for emergency medical calls. The required power supply for both the control unit and the camera as well as the batteries needed to operate the motion detectors were also included. The required brackets including screws, as well as an English-language manual were included. All parts included are made of reinforced plastic and are also very well made. The design is appealing and modern.

The central unit does not require a display and is operated completely via an app. At the front there is an LED indicator, which lights up red when the alarm is triggered. Two additional LEDs indicate whether there is a connection to the WLAN and whether the alarm system is armed. On the back there are two microphones, a siren (80dB) and a speaker. Under the small cap are several indicators that also show an active WLAN connection, GSM connection and a power connection. In addition, there is a mains input behind the cap, which supplies power to the alarm system. With inserted micro SIM card the GSM function of the device can be used. A temperature and humidity measurement module can also be connected to the main unit and is even included.

All sensors, regardless of whether motion sensor or window sensor, can be opened. The batteries are easy to reach and can be exchanged. The window sensors are each operated with two button cells, the motion sensors each with 2 AAA batteries. 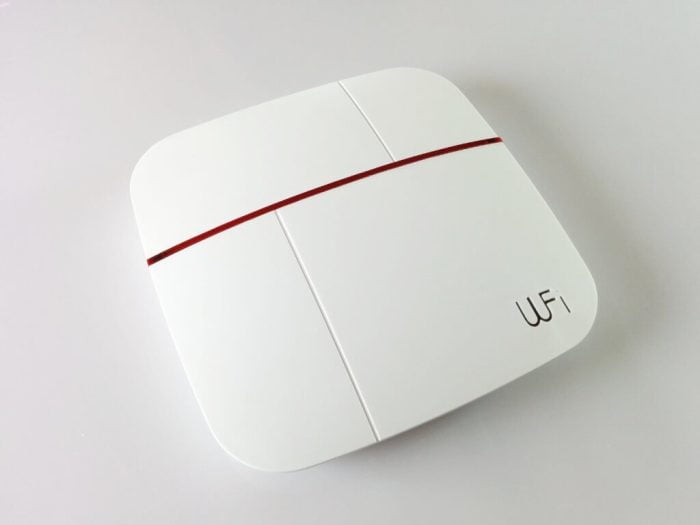 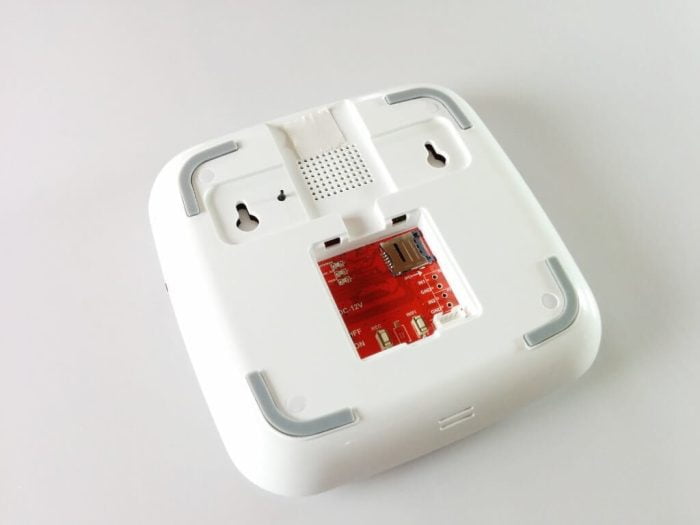 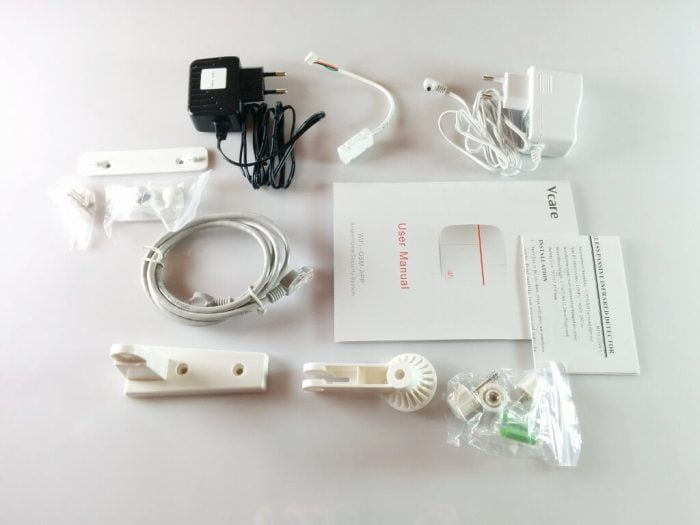 The instruction manual is completely in English. However, the individual steps for commissioning are clearly explained and also illustrated in detail. The control unit has no display and is completely controlled by the app, which is available for both Android and iOS. The user manual contains a QR with the link to the app. Alternatively, you can also look in the respective App Store for the "Vcare" App.

The alarm system should be used with active WLAN in order to fully exploit the potential of this device. If you have started the app, you should be in the WLAN, with which the alarm should be connected later. Within the app you first create the homeowner. In the next step, enter the WLAN SSID and password. There is a small WLAN switch on the control unit that needs to be pressed. Then you have 10 seconds to click the "Connect" button on the app overview. The central unit then automatically connects to the domestic WLAN. Then you enter an individual password and a phone number, which should later receive SMS.

At first, I found the "Vcare" app somewhat confusing. Although you can see all the details at a glance, but individual settings and features are hidden deeper in the system. In the system settings, the language can also be changed to German, but this has changed only the voice output of the central unit, the app language remained in English.

An overview bar shows the connection strength of the alarm system to the WLAN and to the GSM network. In addition, you can see whether the alarm system is connected to the mains or running on battery power. The current temperature and humidity can also be displayed. 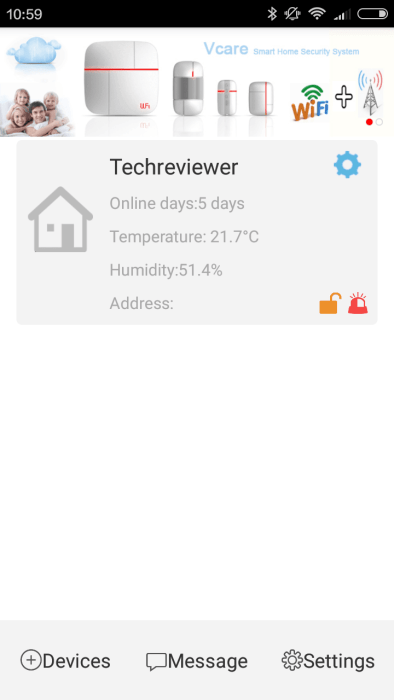 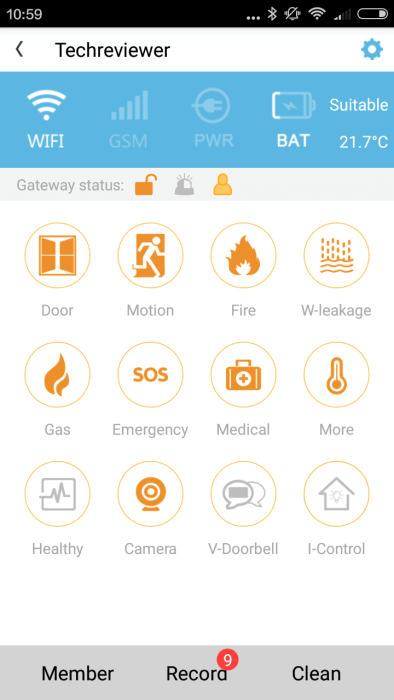 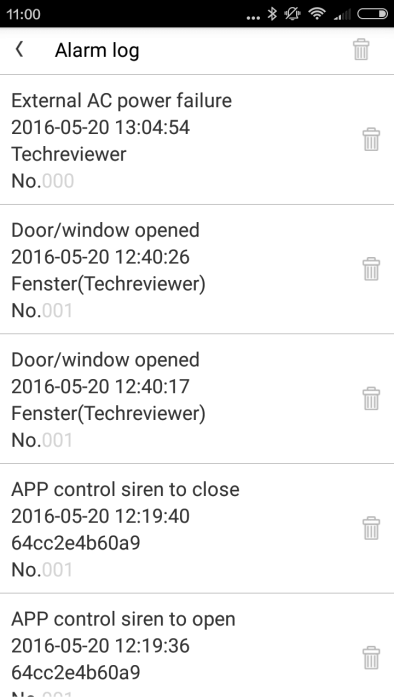 Each additional module has its own subcategory, within which the respective module can be managed. If, for example, you click on one of the motion detectors, you can call up the alarm protocol of the motion detector. Of course, the same applies to the window sensors and the camera. All sensors can be activated or deactivated individually. There is also the option of configuring the alarm system according to a schedule.

In the alarm overview, the alarm can be activated, switched off and switched to the "home mode". In addition, the siren can be tested and muted. Notifications are given for all system alerts, malfunctions, and alarms triggered. 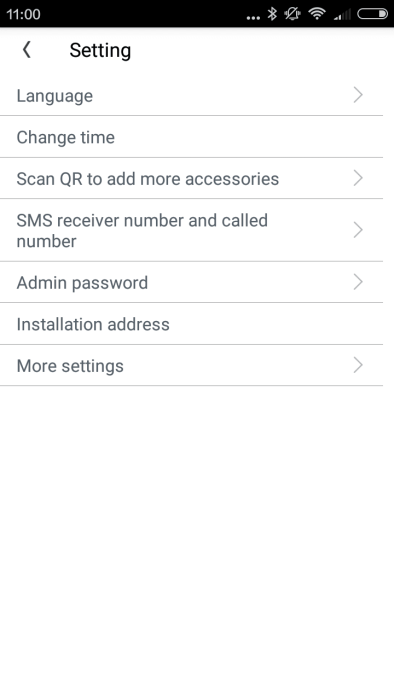 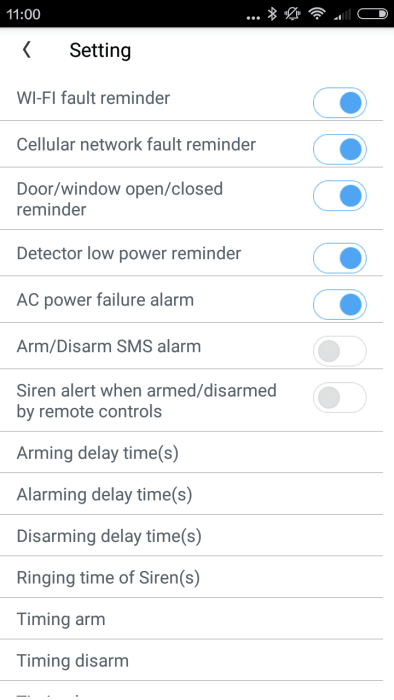 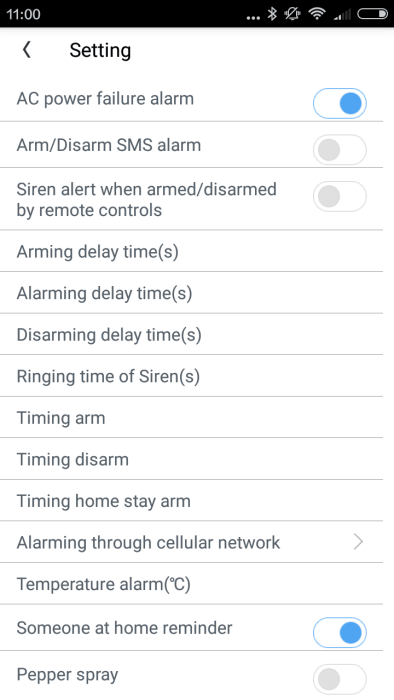 With the active GSM function, the alarm system transmits all notifications via the mobile network to pre-defined telephone numbers. It should be noted in this function, however, that depending on the mobile phone tariff incurred for each SMS sent charges. In the course of the test, the alarm system sent several SMS messages a day to my number. Without a corresponding mobile phone contract, the costs would rise immeasurably. Of course, individual notifications can be disabled individually, so that you only get an SMS in the real emergency.

The individual sensors are added via the app. Each module has its own QR code. Within the app you scan this and the module is immediately attached to the system. Each module can be named individually so that they can be distinguished.

The sensor consists of a magnet and a transmitter. The separate parts can be attached with enclosed adhesive pads. An LED indicator on the transmitter unit indicates a tripped alarm. The trigger range is 2cm. In the test, the window sensor has worked consistently and detected removal from the transmitter. As soon as the battery of the sensor weakens you will receive a notification about the app. 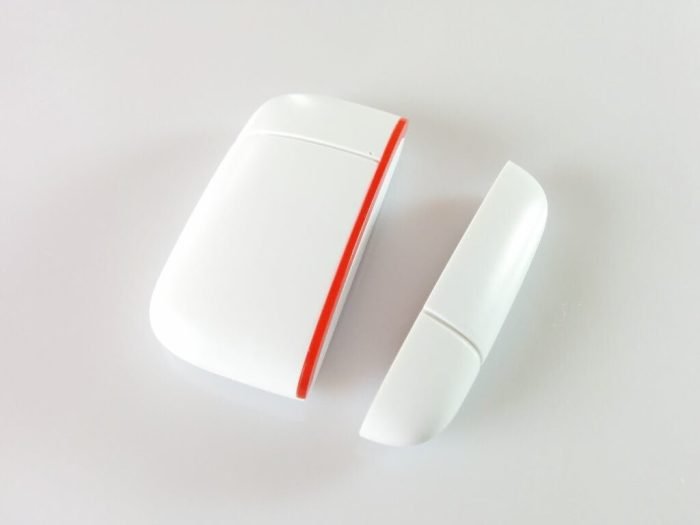 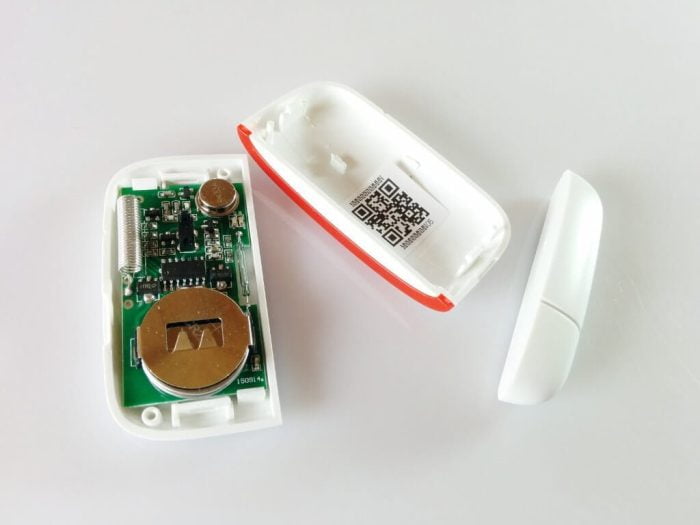 This module also has an LED indicator. Behind the lens hides an infrared sensor. In the test I was able to cover a complete room length of about 15 meters with the sensor. If you open the housing, you can use a jumper to activate a test mode, which you can use to test the sensor. In addition there is a normal operating mode and an "office mode", with much passenger traffic. 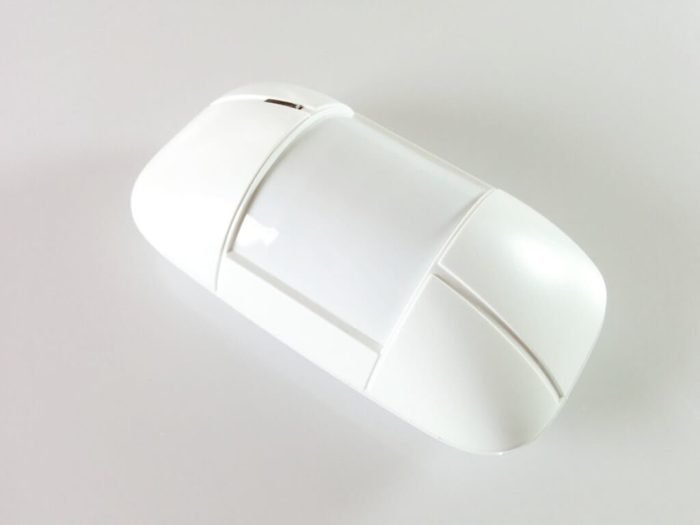 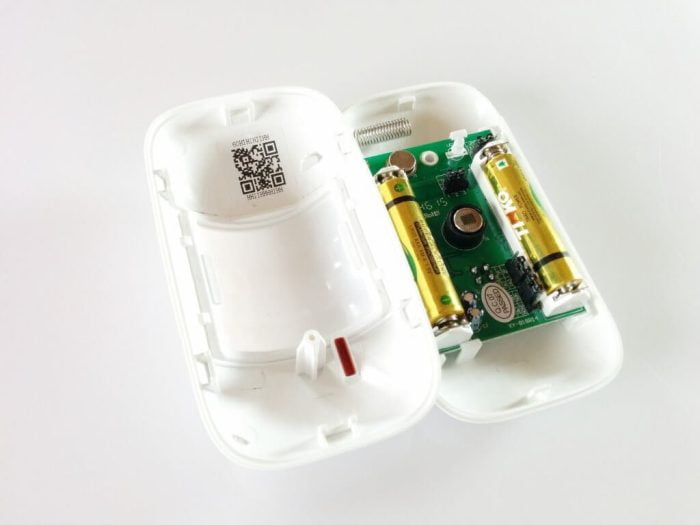 With this compact box, the alarm can be armed, turned off and you can activate the home mode. An SOS emergency button calls a pre-defined number. 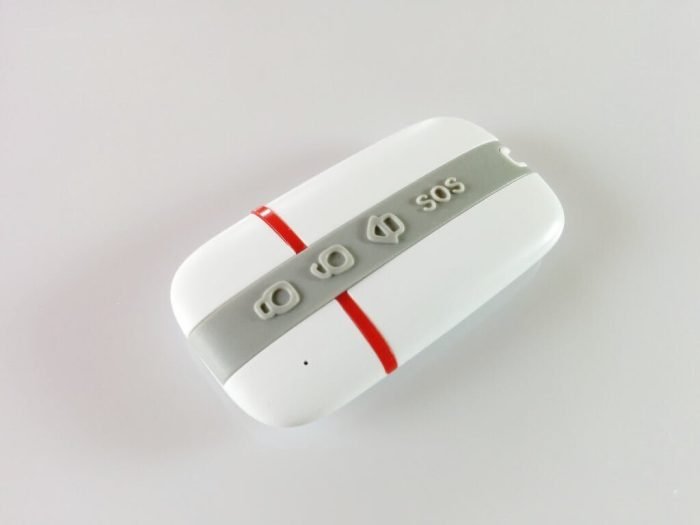 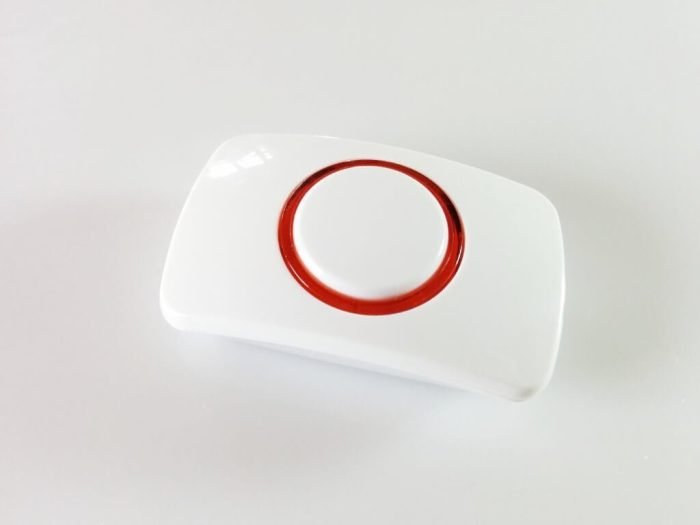 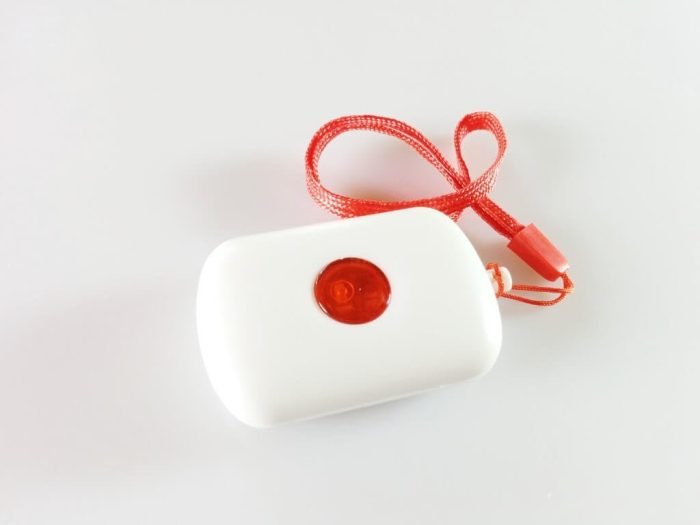 The camera included in the set is a WiFi IP camera that records videos with a maximum of 1280x720 pixels. The maximum refresh rate is 30 frames per second. Recordings can be saved directly to an SD card or accessed via the app. In addition, the camera has a microphone and a speaker. The camera can be turned horizontally by 355 °, tilted vertically by 120 °.

The camera is configured and controlled via the Vcare app. In addition to WiFi, the camera can also connect with a LAN cable that comes with the delivery. Night photography is also possible because of the 8 infrared LEDs.

The recordings made in the test were consistently clear and even at night, the video recordings were a little noisy. The configuration via the app was easy. All you have to do is scan the QR code of the camera and it will be connected to the WLAN and the alarm system. The app can then turn the camera and tilt, have a live image output, voice messages and access the recordings. 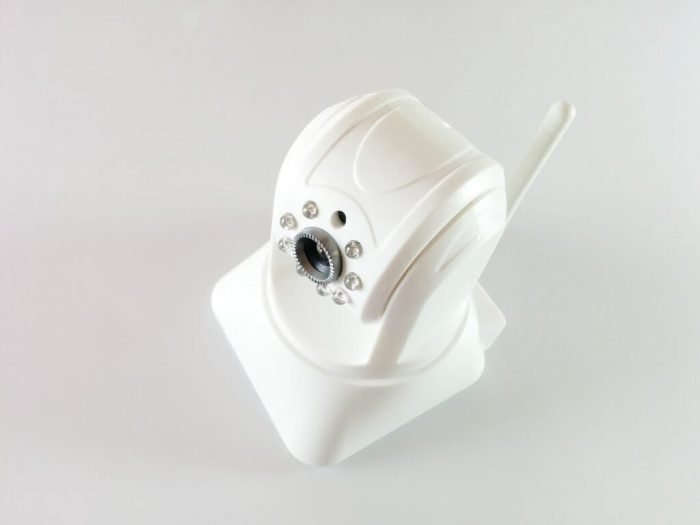 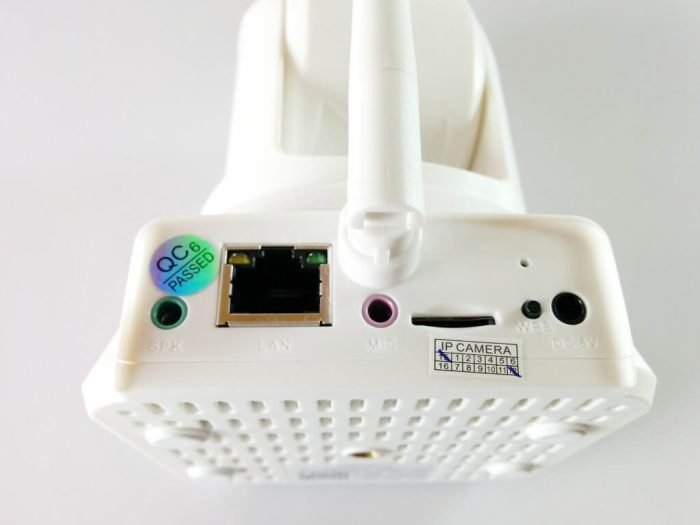 App is a bit confusing
App not available in German

The alarm system offers a variety of functions and options. The workmanship is high quality and the delivery includes all necessary brackets and cables. The individual sensors work exactly and are easy to set up. The design of the system is simple, modern and compact.

The app, however, needs some improvements. Unfortunately, the language can not be switched to German and currently the app is a bit confusing because of the numerous functions. What I liked, however, is the possibility to configure each module individually.

The GSM function is also good. However, you should only use this with a mobile phone tariff, which includes SMS. The alarm system transmits several SMS messages daily without appropriate notification.