by Timo26. April 2016
At the beginning of January it was still rumored, which Virtual Headset UMi will bring on the market and for a few weeks the cat is out of the bag. The UMi VR BOX 3 was released without much fanfare and as one could already guess, this is a Google Cardboard similar VR plastic glasses. In the test for the UMi VR BOX 3 we took a closer look at the VR headset.
Overview
Manufacturer/Model

The UMi Virtual Reality Headset comes in a simple cardboard box containing a cleaning cloth and a multilingual user manual in addition to the VR BOX 3. The UMi VR BOX is well-made and visually appealing due to the black and white piano lacquer design. The entire VR headset is made of plastic and with just under 280g is still pleasantly light. On the bottom there is a small magnetic switch to operate the inserted smartphone (if the smartphone supports the function!). The slot for inserting the smartphone is well padded, which prevents unintentional scratching of the smartphone. In addition, the smartphone is held in place by the side-mounted rubber pads. A magnetic holder prevents unintentional opening of the flap. Supports smartphones with a diagonal of 4-6 inches. Through lateral openings all ports of the smartphone are free, which can charge the smartphone during use, as well as a headphone can be easily connected. 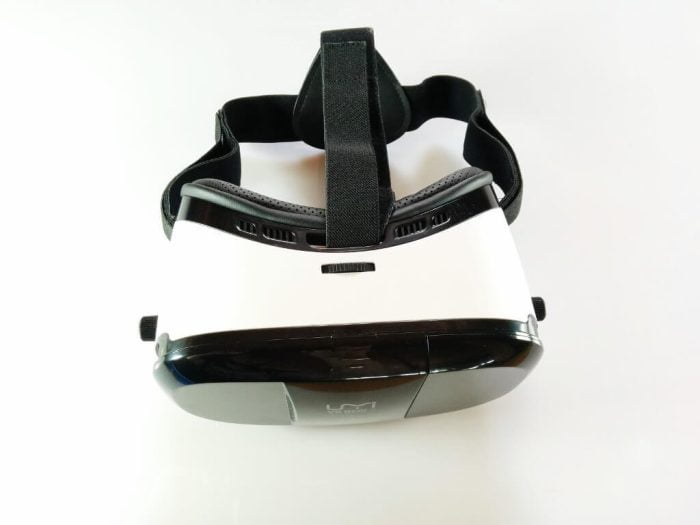 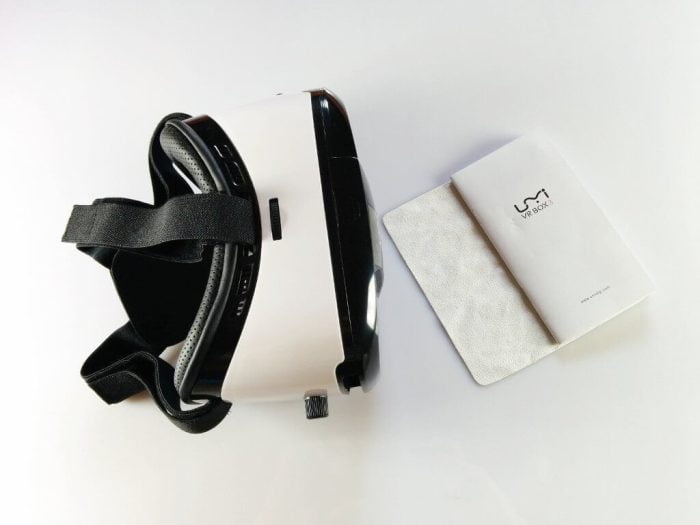 The lenses of the UMi VR BOX 3 are made of ABS resin and are firmly embedded in the lens shaft. The side-mounted controls regulate the distance between the lenses and the smartphone. The above the VR glasses attached regulator is used to correct the eye relief.

The three-point headband of UMi VR glasses is adjustable in size and elastic. The collusion is made of imitation leather. The face pad is also padded.

The German part of the manual is less well translated, but the use of the glasses is largely self-explanatory. The inserted smartphone must be centered with the display on and the VR app started, close the flap and you can dive into virtual worlds.

During the review, the UMi VR BOX 3 has also collected some criticisms. With my Nexus 5 I could not use the glasses properly at first. As soon as you inserted the smartphone, the display turned off automatically. The reason for this is the magnetic switch below, which was placed slightly unfavorably. The original Google Cardboard also has such a switch, but this sits on the right side of the case. Depending on which smartphone you own, you should remove the magnetic switch. The removal is also not a problem because this small magnet is held only by a metal plate inside.

Another criticism is the missing QR code with the configuration data of the glasses. Although the UMi VR BOX 3 has a side-mounted sticker with a QR code, but this only leads to the website of the manufacturer. Thus one must configure the glasses manually or one downloads itself the QR code of the "BOBOVR Z3" glasses down, which is identical with the UMi VR Headset. Another alternative is the Google View Profile Generator (article), which you can use to create such a configuration file yourself. 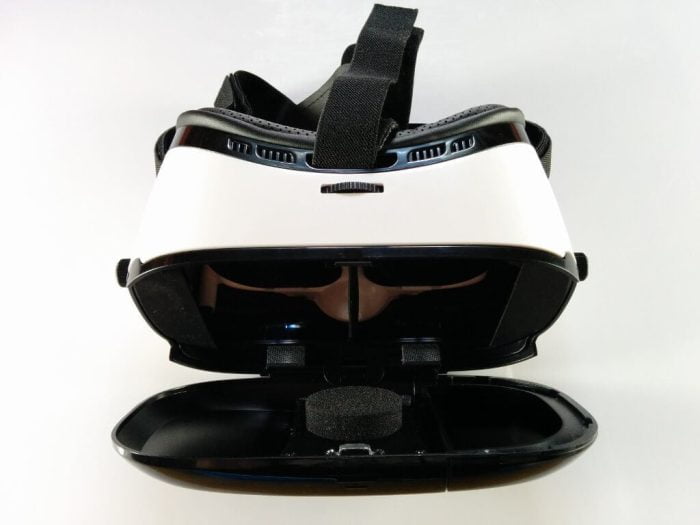 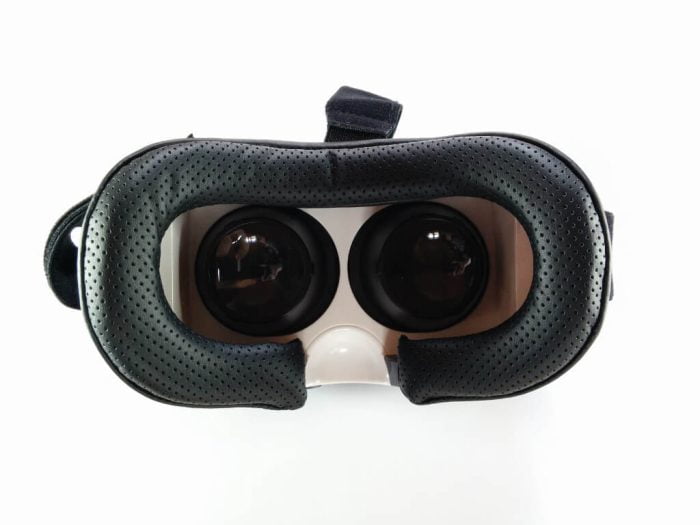 I have tested several VR apps, as well as different smartphones with the UMi VR BOX. The adjustment of the lenses was very easy thanks to the different controls. The glasses can also be easily used with myopia with up to -8 diopter.

With an 5 inch smartphone you can see clear edges left and right. With a 5.5 inch smartphone, on the other hand, a VR feeling can definitely arise. However, you should have at least one smartphone with Full HD resolution and even then you can still see individual pixels.

The view through the lenses was very clear and the field of view was very large with about 90 ° -105 °.

It is interesting to connect the smartphone to the PC and PC games directly via Trinus VR (article) or RiftCat (article) to stream to the smartphone. With a correspondingly powerful PC and an equally powerful smartphone, a very good virtual reality experience can be created due to the high field of view. 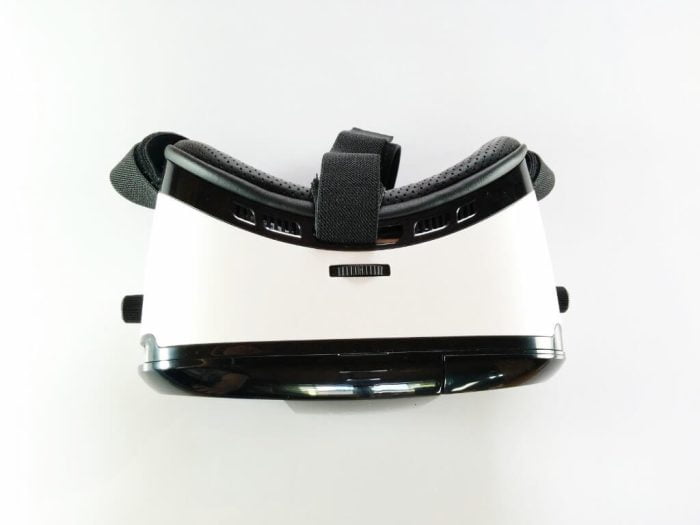 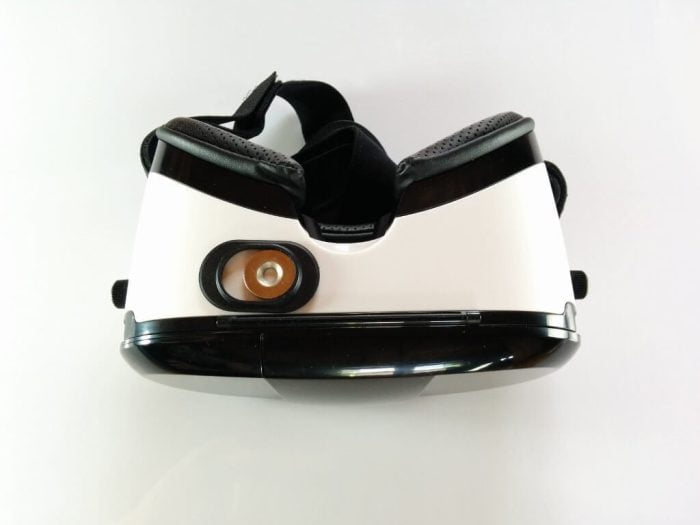 The comfort is very good. Even with a smartphone inserted, the UMi VR goggles sit comfortably on your head and will not be too heavy even after long sessions. Due to the size-adjustable head strap and the padding, the VR headset fits snugly, so that no light from outside penetrates. Despite the tight padding, I did not sweat at any time.

The UMi VR BOX 3 can be described as a "Deluxe Google Cardboard". The VR glasses are very well made and the quality of the lenses was convincing in the test. The wearing comfort is good and even with myopia this headset can be adjusted individually thanks to the adjustable lenses.

Criticism can be practiced on the unfavorably placed magnetic switch. Depending on which smartphone one owns it can come here to problems. The magnet can also be removed later. Another criticism is the missing QR code for configuring the headset within the Google Cardboard app. Here you can refer to the configuration of the BOBOVR Z3 glasses.

Thanks for the review. I wanted to buy this Google Cardboard lately, but I hesitated. Do you pull on the normal glasses or how does it work?

You can easily use the UMi VR BOX with myopia up to -8 diopters. You take off your glasses for this. A slight farsightedness can also be compensated via the regulator.