by Timo13. May 2016
The UMi Touch is a mid-April 2016 released middle-class smartphone of the Chinese producer "UMi". The design is reminiscent of the well-known (former) flagship Meizu MX5, but what the much cheaper UMi Touch has to offer, we have looked at in the detailed test closer.
Overview
Manufacturer/Model

First impression of the UMi Touch

UMi surprises again and again with creative and visually appealing packaging, which is why the UMi Touch was also delivered in a modern cardboard box. In addition to the smartphone, the package included a SIM pin to open the SIM slot, an English manual, and a charger (5V 1A) and a USB data or charging cable included. A screen protector was already applied by the factory. 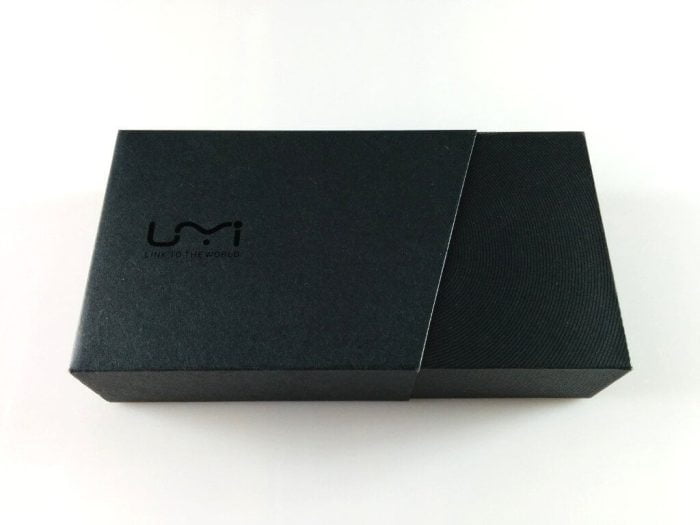 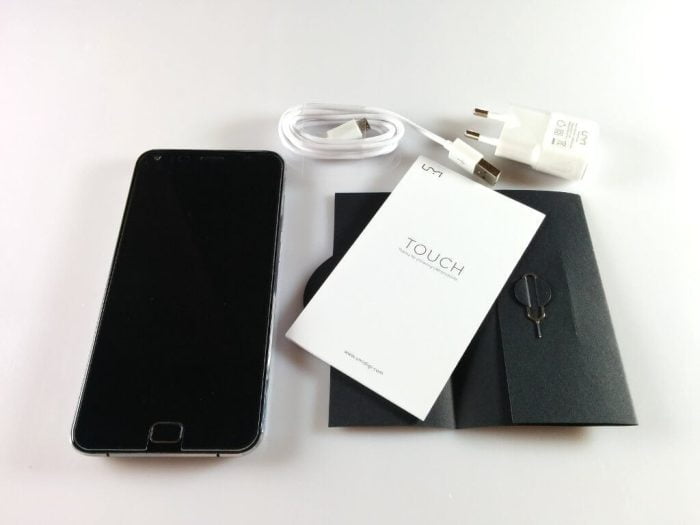 As indicated in the introduction, the backside design of the UMi Touch is very reminiscent of the Meizu MX5. Also, the UMi smartphone has a metal unibody back, which can not be removed in normal use. The upper and lower housing closure, however, consists of plastic. On the right edge of the case are the physical control buttons of the device. These amount to a power button and a volume rocker. Another physical button that also contains the fingerprint scanner is the Home button below the display. Next to it are two capacitive buttons. Above the display are the pinna, a proximity sensor, the 5 megapixel front camera and an additional LED flash. Connection options include a micro USB port for charging the smartphone and an 3.5mm audio output.

In the first hands-on I initially felt the UMi Touch as quite powerful. With a weight of well 200g, the new UMi smartphone is comparatively heavy. Despite the metal back, the smartphone sits well in the hand and leaves a valuable impression.

Regarding the processing, there are also some criticisms. Unfortunately, the Home button on my test device sits a bit diagonally in the front. In addition, the completion of the metal back is not processed properly. Here was my UMi Touch a small protruding gap, but only visually affected the device. 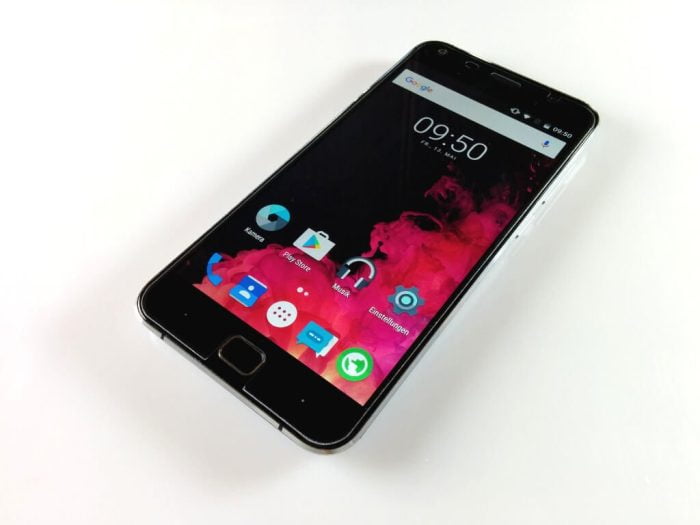 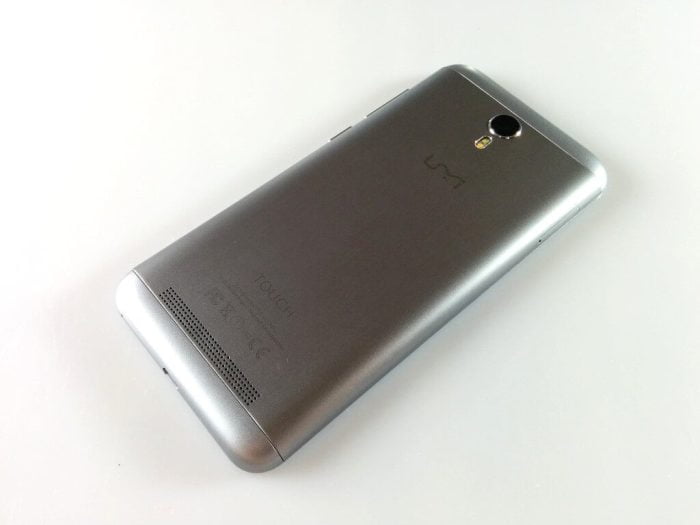 The UMi Touch display has a diagonal of 5.5 inches. A Full HD display from an unspecified manufacturer is installed, which has a resolution of 1920x1080 pixels. The pixel density is 400 PPI. On the surface, the touch uses so-called 2.5D curved glass, which creates slightly rounded edges. The UMi Touch operating instructions also mention Gorilla Glass 3 from Corning, which is particularly unbreakable and scratch-resistant. To what extent this is true I could not understand. With UMi in particular, you should note that often there are hardly verifiable specifications that ultimately have not turned out to be true.

The color representation of the display is good. The colors do not look too overdriven and are presented in a pleasant way. The viewing angle stability is also good. Colors will remain depending on how you tend to get the smartphone. Even the font remains legible from every angle. The maximum display brightness is average. In direct and strong sunlight, the display was barely readable.

For additional correction of the display presentation, there is the menu item "MiraVision". In addition to preset profiles, you can adjust the contrast, the saturation, the image brightness, but also the sharpness and color temperature, individually. The touch screen of the UMi Touch works accurately. Multitouch is supported with up to 5 fingers. 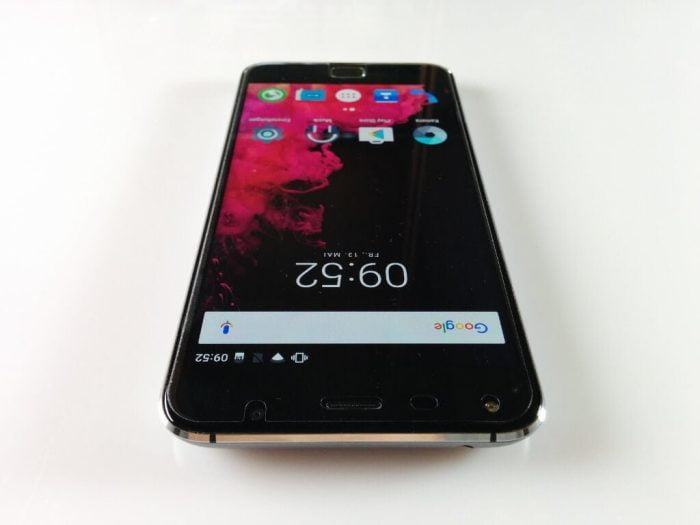 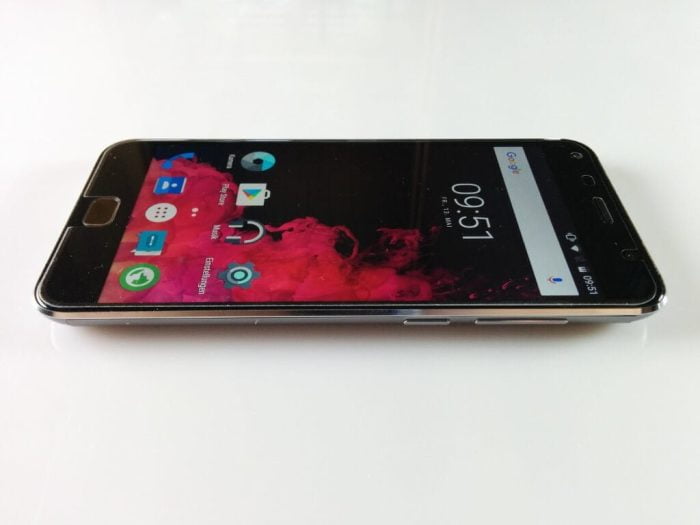 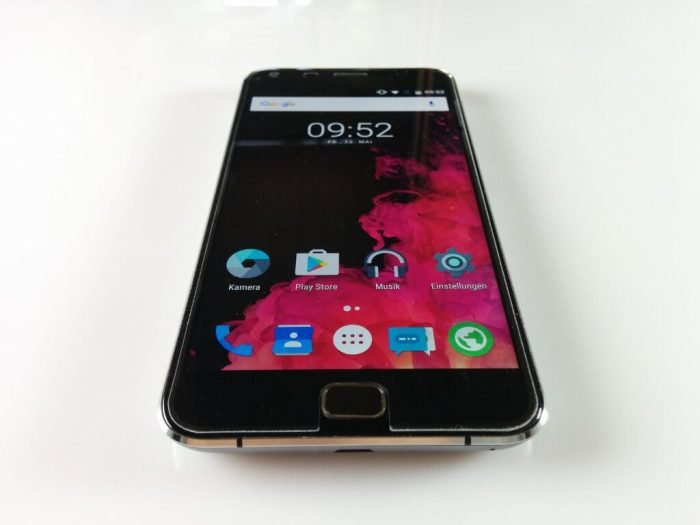 The UMi Touch uses a meanwhile older MediaTek MT6753. This octa-core processor clocks with a maximum of 1.5GHz and is additionally supported by 3GB RAM and a Mali-T720 GPU. The internal memory is 16GB and can be extended with a micro SD memory card to further 128GB. It should be noted, however, that a memory expansion is done via the SIM tray. Result of such a "hybrid slots" is that either the dual SIM function of the smartphone uses or gives a slot of the memory expansion.

The performance of the UMi Touch was convincing in the test. The MT6753 is still a solid processor that allows for a fluid user experience. Multitasking is no problem thanks to the 3GB RAM for the UMi Touch. Also with the Mali-T720 GPU can play games like "Asphalt 8", but one should give up for a liquid game enjoyment on too high graphics settings. 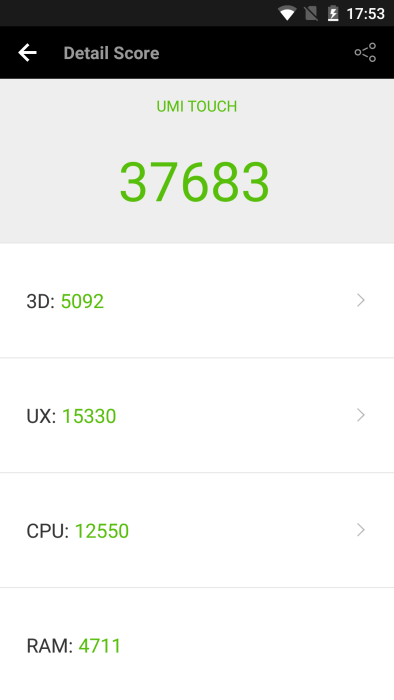 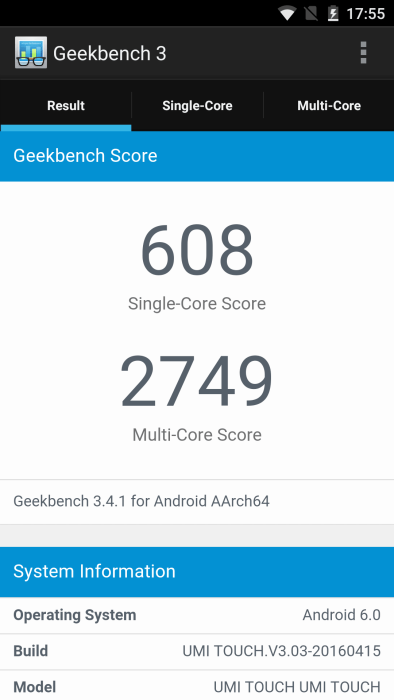 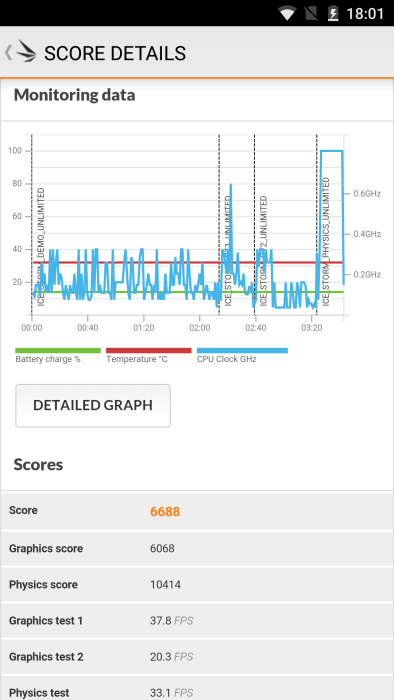 The UMi Touch is the first UMi smartphone with the latest Android 6.0 Marshmallow. The user interface comes as an Android stick therefore. Themes or even third-party apps were not preinstalled. The settings have been expanded to include a gesture control and smart wake.

The gesture control works via the proximity sensor, which is located above the display. Various swipes can be combined with different actions that facilitate the usability of the smartphone.

The smart wake function allows the smartphone to be activated even when the display is switched off. If, for example, a "C" is drawn on the deactivated display, the camera app opens automatically.

Updates will be received OTA (Over The Air). Since the release in April 2016, the device has already received several updates, so you can only hope that UMi will continue to provide updates on this smartphone continue. The rumored shortly before the publication rumor that should run on the UMi Touch Windows 10 has not yet proven true.

The main camera of the smartphone dissolves with 13 megapixels. The image sensor used is a Sony IMX328, to which even Sony does not give a detailed description. The main camera is supported by a dual LED flash, which emits in different yellow tones to create a natural picture in the dark. For focusing, the device has an autofocus.

The image quality of the main camera can convince by color fastness. An image noise is barely perceptible, however, especially at close-ups, the edges were unevenly blurred. A criticism of the main camera, however, is the rather slow autofocus. Partially it took 8 to 10 seconds until the main camera of the UMi Touch automatically focused.

The camera app is unspectacular. Here the conventional MediaTek camera app was used, which, however, contains only three recording modes. An interesting extension, however, is the filter mode, which allows the image to be edited on-the-fly. 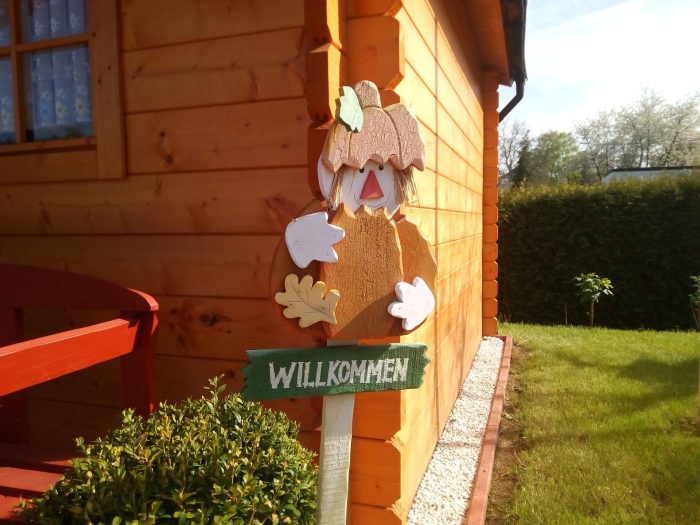 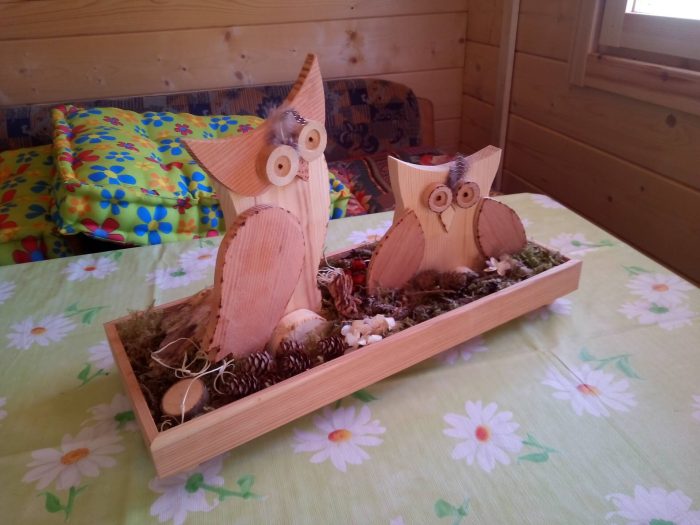 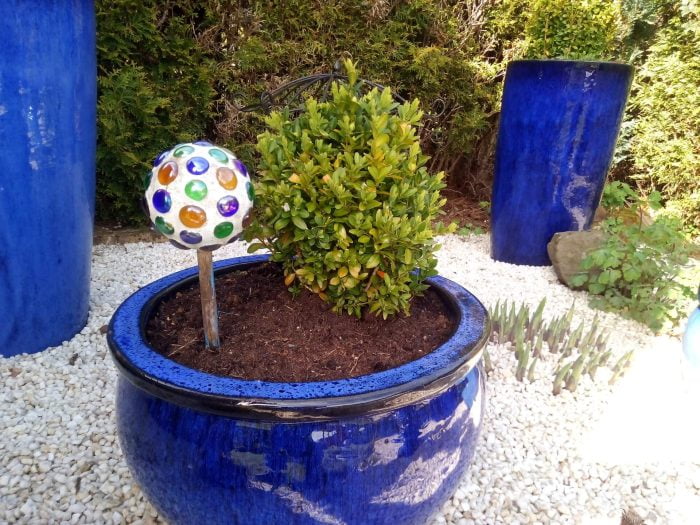 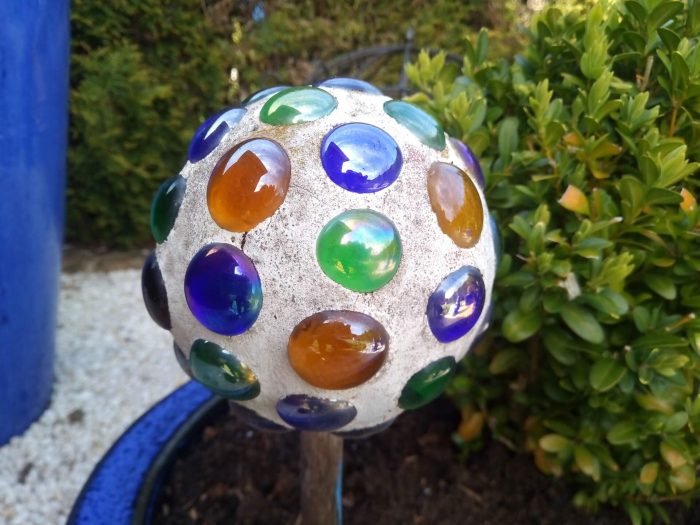 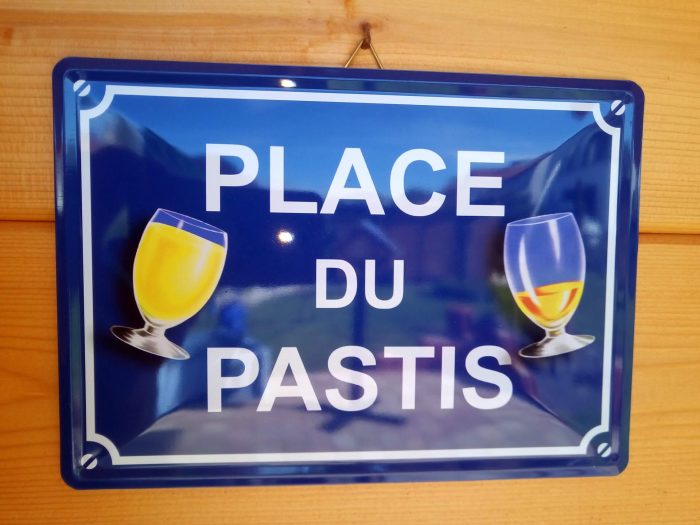 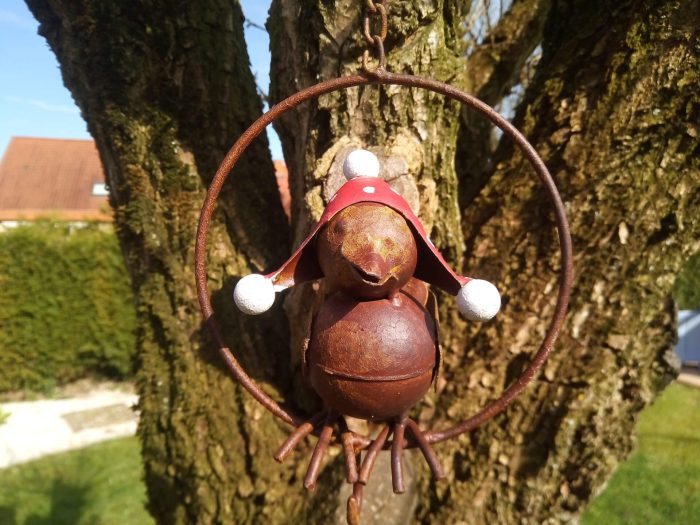 The fingerprint scanner has been integrated into the physical home button on the UMi Touch. Unlocking the device via the scanner works fast. There were only false identifications in certain cases. You should put your finger quite flat on the sensor. Especially with the one-hand operation, in which I unlocked the smartphone with my thumb, it often came to misrecognitions, because my thumb was on the side of the scanner.

Telephoning works quite well with the UMi Touch. Both my interlocutor understood me well, as well as I understood him clearly. For network coverage the UMi Touch supports all common 2G, 3G and 4G standards.

The speaker was convincing both in the handsfree function, but also in the playback of music. The sound was a bit dull, but the maximum volume was considerable. A scratching of the speaker did not occur at maximum volume.

According to UMi, the WiFi protocols 802.11 a / b / g / n 2.4GHz / 5GHz are supported. In the 5GHz network of my router, the UMi Touch but did not want to book. Even different settings on the router did not succeed. The stability and range over the 2.4GHz network was good, though.

The Bluetooth 4.1 module of the device also does a good job. A hands-free device and an external Bluetooth speaker were immediately recognized in the test and also the connection stability was convincing.

The GPS fix was done quickly. On a cross-country trip, the signal was consistently stable, within the city canyons, the signal was not quite so accurate, but I was able to navigate safely with the UMi Touch. An e-compass is unfortunately not available with this smartphone.

Other sensors include a gyroscope, a proximity sensor, a brightness sensor and an acceleration sensor. 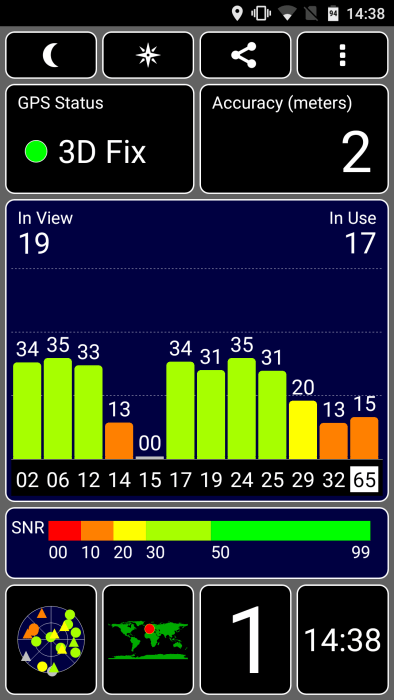 The battery of the UMi Touch has a capacity of 4000mAh (according to the manufacturer). In the test with a USB multimeter I was able to understand this value as far as possible. With intensive use I had to charge the smartphone inevitably in the evening. With normal usage, 2 days work well. In standby, however, the touch consumes very little energy.

Unfortunately, the UMi Touch does not have a quick charge function. A complete charge thus takes about 3 ½ hours.

With the UMi Touch, the often-criticized manufacturer has finally brought back a decent low-budget smartphone that lives up to its price. The performance is good and the other features of the smartphone was convincing in the review. However, the processing of the device is worthy of improvement. A crooked home button and an inaccurately processed back are visually a damper.