by Timo2. February 2018
The TenFifteen F3 is a smartwatch from China, which does not rely on a proprietary user interface, but completely based on Android, as it is known, among other things, from smartphones and tablets. All information about the smartwatch we have gathered in this post.
Overview
Manufacturer/Model

The design of the TenFifteen F3 meets one Mix of outdoor and sports smartwatch, With a thickness of 15.6 mm, the deep black watch case is anything but discreet in appearance. The pronounced thickness can be explained by the fact that the manufacturer did not integrate all the antennas (GPS / WiFi) into the watchband, but rather housed them directly in the housing of the smartwatch. Thus it is possible Swap watchband as you like, This is already on the smartwatch watchband consists Silicone, is größenverstellbar and will about one Dornschließe closed.

After Degree of protection IP67 is the smartwatch Dust-proof and protected against temporary submersion, Although the manufacturer advertises that one quite with the smartwatch too swim could, is it not recommended, Temporary submersion means protection against penetrating water at a maximum depth of one meter with a maximum of 30 minutes. The movements caused by swimming make for a changed water pressure, which is currently not considered by the IP certification!

A striking design feature is a total of 4, located on the watch case Control buttons, At the touch of a button, different functions can be triggered. Above each of these control buttons emblazoned a bold lettering, the respective Function (COMP, HEALTH, START, BACK) explained. A detachable back, as is often the case with smart watches from China, does not exist on the TenFifteen F3. The SIM card Instead, it is specially inserted via a SIM slot on the edge of the case. Also the back are the 4 pin charging port and the Heart Rate Monitor.

The smartwatch starts on circular, 1.39 inch display of the type OLED. Display resolution is 400 x 400 pixels. The resulting dot density is in sharp PPI 286, Unlike LCD panels, OLED panels have no backlighting. Each individual pixel lights up on its own and can be switched off if necessary. This will be a special rich black level and an (usually) lower energy consumption achieved. 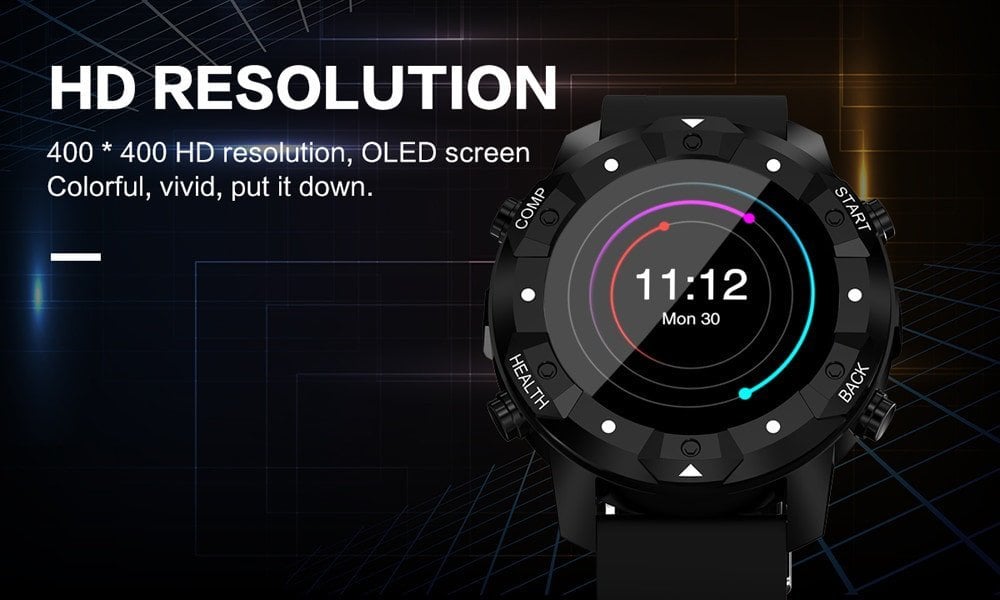 The processor of the TenFifteen F3 is the one used by 90% of current smartwatches from China MediaTek MTK6580. This is a quad-core processor whose Cortex-A7 cores clock up to 1.3 GHz. The main memory is only slightly lower with 1GB than it is the case with comparable and recently released models (mostly 2GB), but in our experience it is sufficient for a largely fluid multitasking. The internal flash memory has a size of 16GB. An additional extension of the internal memory by means of an SD memory card is not possible. The system is powered by one 550 mAh battery, with which one Runtime from 1 to 1 1 / 2 days seems realistic.

Instead of a proprietary operating system, TenFifteen relies on an open one Android 5.1, The user interface has been adapted accordingly to the circular display of the TenFifteen F3. Apps can be directly from the preinstalled Google PlayStore download and install. An additional connection to a mobile device is not necessary because the smartwatch has its own WiFi module, In that sense, the F3 is one "Smartphone for the wrist".

Among other things, it is possible with the smartwatch on the usable SIM card to phone and surf (2G and 3G) or transfer calls from the connected mobile device to the clock via Bluetooth (V4.0), Notifications to receive, or via the integrated GPS module to navigate. Sports features are of course also available. So the TenFifteen F3 has one Pedometer, which records data on the movement process, as well as on a Herfrequenzsensorthat monitors the heart rate. Various sports programs are available. In addition, the smartwatch can be used as sleep monitor be used. Music can be streamed and controlled by the mobile device via Bluetooth to the smartwatch. 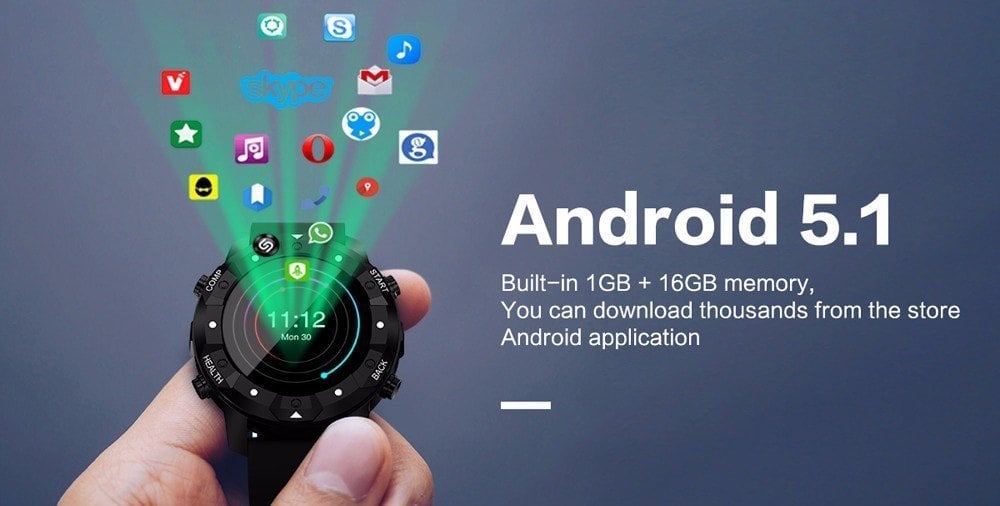 Smartwatches from China have made little progress in recent months. Many of the recently released models, including the TenFifteen F3, continue to rely on one meanwhile older MediaTek processor equipment, which indeed fulfills its purpose, however, has stopped in its stead, especially in relation to the Android OS. Android has now reached version 8, which is why the here used Android 5.1 is quite outdated. If you are currently opting for a smartwatch from China, it is recommended purely after the Design and support within the smartwatch community to make his choice, because at least on the hardware as well as the software side, many of the models found under different names have hardly any notable differences.