by Timo11. December 2019
Supretro brings emergency in his pocket. The Android game console is packed with more than 2300 games and emulates up to 15 game consoles, including N64 and Dreamcast.
Overview
Manufacturer/Model

Supretro - Nostalgia for the trouser pocket

The Supretro game console is now available in the relevant import shops. Gearbest has exclusively provided us with a coupon with which you can Buy Supretro reduced for only € 81 can. All further information can be found in the following deal box or at the end of the article in the price comparison.

With this GearBest coupon you can buy the Supretro Handheld Game Console reduced for only € 81.
DJZEWUZ2JX
SHOW COUPON
TO DEAL
8€ Discount
Valid until 31.03

Normally has from nothing Powkiddy, the manufacturer of Supretro, has unleashed the handheld game console on the retro community. Surprising is the concept, because Supretro is not a classic game console packed with games, but based on Android, especially the highly acclaimed Pandora's Box user interface. The console is already delivered with more than 2300 games, Emulate alongside Gameboy classics as well Playstation, N64 and Dreamcast Games.

The design of the console is based on the well-known Gameboy. At the top is an 3.5 inch IPS display with 640 x 480 pixel resolution, which corresponds to 229 DPI. In addition to a sharp presentation, the panel delivers a 60 Hz refresh rateso that games are presented very smoothly.

The Operation of Supretro is mainly designed for arcade games. All controls are located below the display. There are no shoulder buttons, so getting control of N64 and Dreamcast tracks takes some getting used to. In addition to an analogue stick, the console offers a D-pad, 6 control buttons, as well as a Home, Select and Start button. The case is available in white, orange and blue

Supretro uses the Pandora's Box user interface. This is not only clearly structured, but also offers numerous functions and settings to the system (display brightness, sleep mode) and the games (memory levels, game settings). The actual operating system builds up Android 6 on.

Periphery can via device be connected to the console. WiFi allows Supretro to access the Games Marketplace and receive system updates. If you prefer to play your games on a big screen, you can use the game console HDMI-out connect. An additional 3.5mm audio jack enables trouble-free playing on the go. Speaking of traveling: The Accumulator The handheld console measures 4000 mAh and is up to 6 hours of gameplay. 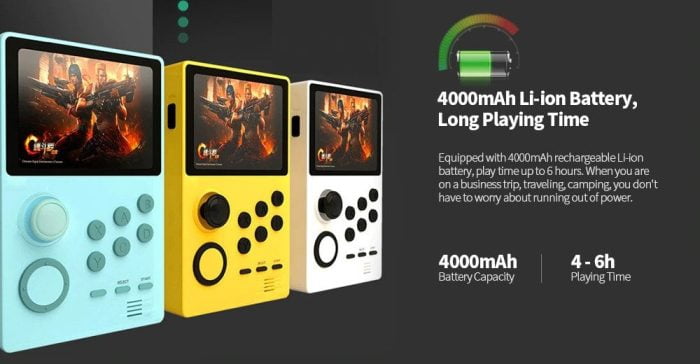 To keep the price as low as possible, Powkiddy has opted for the already 2016 MediaTek MT6580A system-on-chip decided with Mali 400 MP2 GPU. The processor is assigned to the low-end range, but is sufficient for the emulation of most classics. Only in demanding games of recent generations of consoles (PS, PSP, N64 and Dreamcast) image collapses are expected.

You want to know where to buy the Supretro game console? In our price comparison we list the current offers of the most popular shops. All prices are checked and updated several times a day. Should a shop appear several times, it concerns the different warehouses of the dealer.

Your article hits the point, but I would add something. The first batch that went out still has some errors. Some have air bubbles under the display and the software is said to have some bugs. It also says that the first batch should not go on sale and the manufacturer has targeted a maximum of $ 80 instead of $ 120. The YouTubers who have already tested the part were paid for by the dealers. If I were you, I would wait for the right tests.

Do you already have the device? I am considering buying the "improved" version directly from the Powkiddy Store: https://de.aliexpress.com/item/4000386016153.html