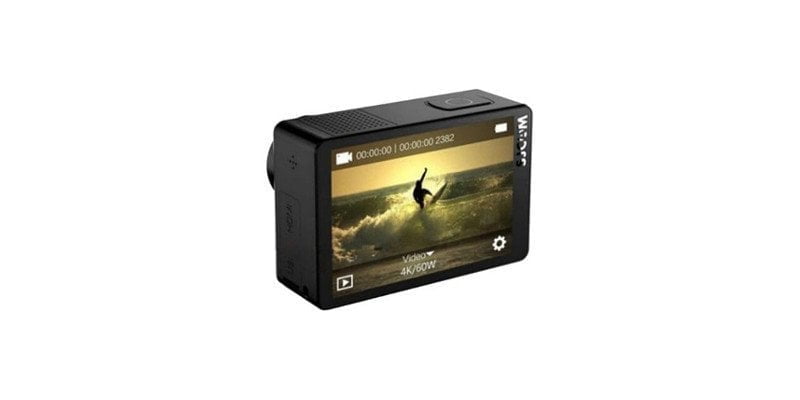 by Timo22. March 2018
SJCAM slaves on the action cam market and "leaks" a new high-end action cam called "SJCAM SJ8". What's up to the rumors and when to expect a publication, you'll find out in this post!

Preview of the SJCAM SJ8

SJCAM has announced on Facebook that the SJCAM SJ8 Pro just before its release stands. A teaser image again confirms the design of the new 4K Action Cam. The exact release date is still pending. Even if the manufacturer will co-publish the two other models SJCAM SJ8 Plus and Air, is not yet clear. We will keep you up to date and will update the post as soon as there is new information. 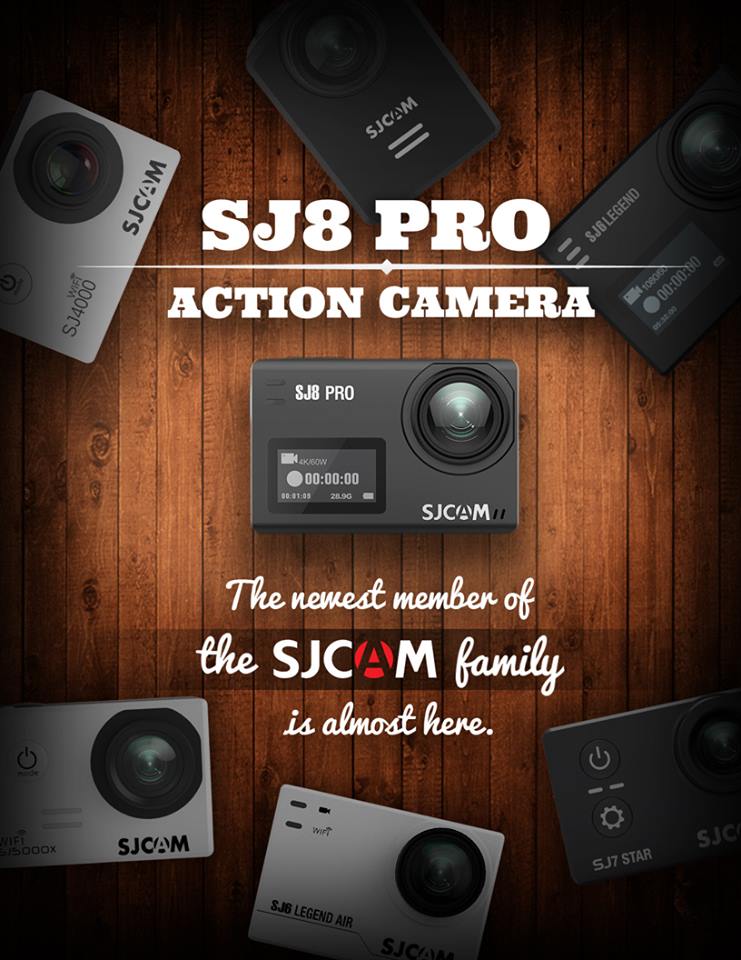 A few days ago new leak the round, after which 3 models of the SJCAM SJ8 should appear. The leak comes from the site "Poshgadgets", a blog most likely run by SJCAM itself and specifically serves as a release platform for all SJCAM "leaks".

The model with the best features will be the name "SJCAM SJ8 Pro" wear and should with one "Ambarella H2-2S85" image processor and the one already mentioned Sony IMX377 image sensor be equipped. The SJ8 Pro promises native 4K recordings with up to 60 pictures-per-second, Other features include an 2.33 inch touchscreen, voice control, gyro image stabilization, 8 digital zoom and support for an external microphone, as well as an external remote control. The capacity of the battery should be 1200 mAh.

The Mid-range model is under the name "SJCAM SJ8 Plus" appear. This is also a natively 4K-resolution action cam, but only with maximum 30 pictures per second takes. Of the image processor amounts to one Novatek 96683. The image sensor is a 12 Megapixel Sony IMX117, The other equipment features will be identical to the SJCAM SJ8 Pro. Already available models with similar features are for example the ThiEYE T5e or the SJCAM SJ7 Star.

The Low-budget model is under the name "SJCAM SJ8 Air" appear. Of the image processor becomes a Novatek NTK96658 be. Of the image sensor a 14 Megapixel Panasonic MN34110PA, Videos takes this action cam natively at maximum 1080p resolution with 60 images-per-second on. Photos can be taken with up to 14 megapixels. The other features also differ only slightly from the two larger models. The back 2.33 inch touchscreen will be available. However, you have to do without the front status display. WiFi, as well as gyro image stabilization are listed as features.

The SJCAM SJ8 model series will be released at the beginning of 2018.

After the current SJCAM top model, the SJCAM SJ7 Star Now almost 1 year is on the market, there are increasing rumors that SJCAM will release a successor with the SJ8 later this year. Here is the SJCAM SJ8 a high-end action cam with decent hardware, which will include videos in 4K at 60 pictures per second. 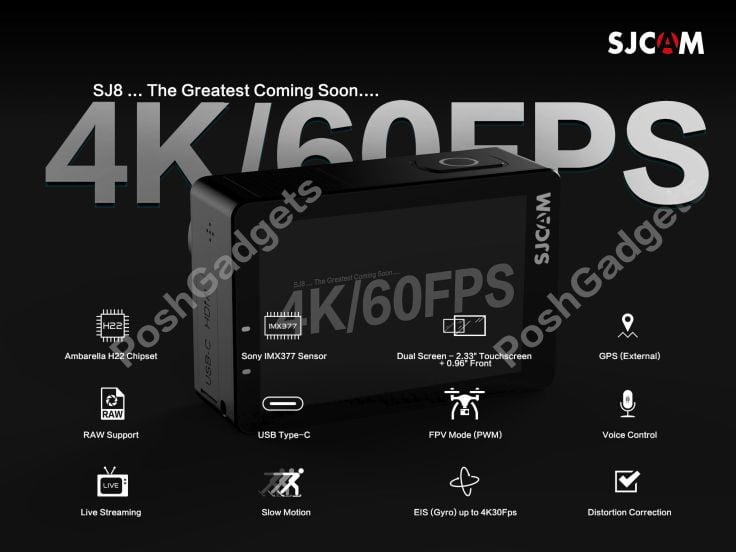 According to the first leaks, the image sensor is an 1 / 2.3 inch large and 12.35 megapixel resolution Sony IMX377 image sensor, Same is among other things in the current one Yi 4K + builds and does an excellent job there. The image processor bears the name Ambarella H22 and is a system-on-chip announced at the beginning of the year, which is technically located between an Ambarella H2 and the Ambarella A12 SoCs. This combination allows the SJCAM SJ8 to export videos natively 4K at 60 images-per-second take. The recording format is MP4. There are no data for video coding yet, but the Ambarella H22 is able to encode video material in H.265 as well. Pictures can also be found in the Raw data format RAW get saved.

Touchscreens are indispensable in current Action Cams and facilitate the operation immensely. The SJCAM SJ8 will also be equipped with a touch screen on the back, whose Diagonal 2.33 inches will be. In addition, it becomes a front-end LCD Display with a Diagonal of 0.96 inches which will probably serve to display the camera status. Also likely is one electronic image stabilizationwhich will be available at 4 images per second up to a resolution of 30K. The possibility of determining position, for example, to record distances and speeds, it is only about one external GPS module give.

Voice, battery and others

In addition to the operation via touch screen, it will also be possible to use the SJCAM SJ8 via voice commands to control. Presumably, the function will be similar to one Yi 4K + or GoPro Hero5. Those who prefer the Action Cam from afar, will be on the WiFi function of the camera. Via an app, it will be possible to make camera settings directly via the connected smartphone or tablet, as well as live image output, and even to transfer recordings wirelessly. To the battery capacity are still no data available. The capacity will probably be between 1000 and 1400 mAh. Again it is known that the action cam with the current USB-C standard which external modules, such as an external microphone, can be connected.

Although the SJCAM SJ8 promises something, it brings nothing in comparison to other high-end action cams. Compared with the Yi 4K +, which has been stirring up the market since the beginning of the year, the SJ8 even lags behind in terms of equipment. Instead of relying on the latest Ambarella H2 processor, SJCAM prefers to use the weaker Ambarella H22. To what extent the SJCAM SJ8 can finally prevail and at what price the Action Cam will appear, we will probably find out in September. At least the online retailer GearBest has already added the SJ8 to its range.

At first glance, the difference SJ8 Pro & SJ8 Plus does not seem so big, but is quite clear:
SJ8 Plus has a lower data rate and only 3-axis stabilization, you can see that pretty clearly:
https://www.youtube.com/watch?v=oXs-tVl_pvU

Hi Phil, I watched your video and I agree. Currently I have the SJCAM SJ8 Plus and Pro in the test and just in detail, the differences between the two Cams but huge. Unfortunately, I am not really satisfied with the stability of the user interfaces. With both cams I already had several total crashes and the plus I had to even flash again.

Hmm, that does not sound so good. Then maybe YI, it runs very stable.

Did not crashes or freezes occur in your test?