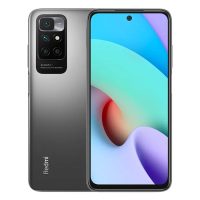 Just over a year after the Redmi 9 was released, Xiaomi is sending the successor - the Redmi 10 - into the race. In addition to numerous upgrades, we can also expect a fresh design. This is also where we start the test. 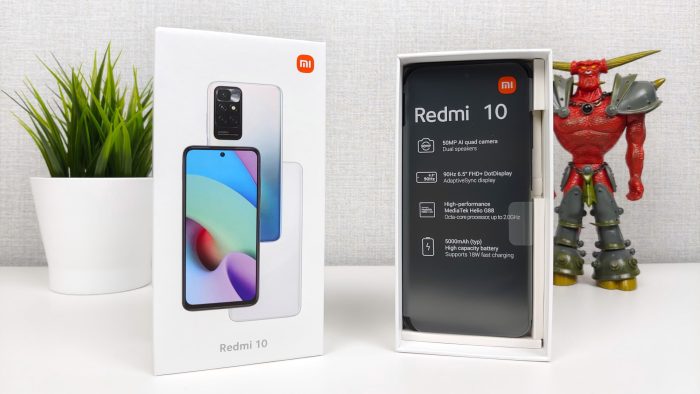 Xiaomi has now officially presented the Redmi 10 for the European market. There is currently a good offer at goboowho offer the new Redmi 10 with NFC in the EU version from 164 euros. With fast and free shipping from the EU warehouse, the smartphone is with you within a few working days.

With our exclusive Goboo discount code you can buy the Redmi 10 smartphone reduced for only 164 €.
GOBOO995
SHOW COUPON
TO DEAL
5€ Discount
Valid until the end of the promotion

The design of the Redmi 9 has been adopted. Instead, the Redmi 10 has the same design as its big brother - the Redmi Notes 10 (Pro) - copied. 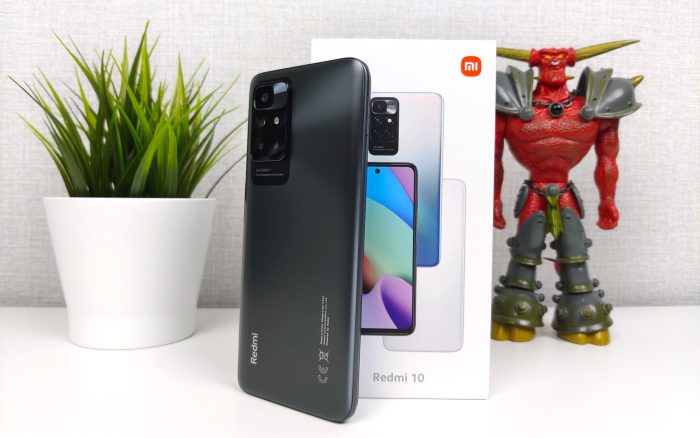 Incidentally, the camera bump protrudes a full 2,5 mm from the back, which means that the smartphone inevitably rests on the camera when it is in the supine position and wobbles when operated.

The frame and back of the Redmi 10 are made of plastic. The matt finish of my test device in the color "Carbon Gray" shimmers stylishly in the light. Fingerprints cannot be avoided here either and they cloud the appearance a little. Other colors in which the smartphone is available are "Pebble White" and "Sea Blue". 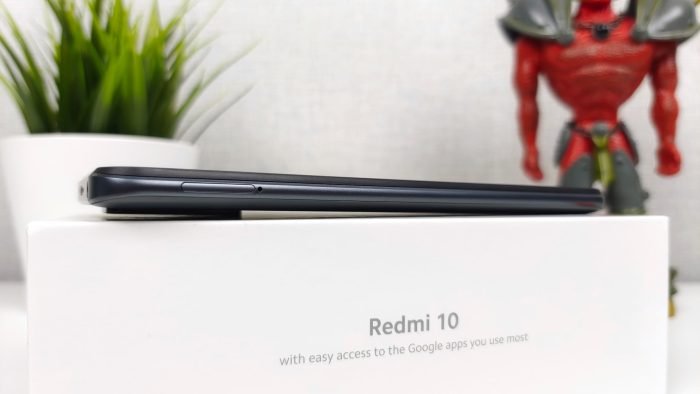 The 161.95 inch dot display is located on the front of the 75.53 x 8.92 x 181 mm large and 6.5g heavy smartphone. The 8MP front camera has been placed in the top center in the best punch-hole fashion. Above is the narrow and barely visible earpiece. There is no notification LED despite the missing always-on function.

The SIM tray is located on the left of the frame, in which you can insert two nano SIM cards and a microSD memory card. On the opposite side are the volume rocker and the power button, which also houses the fingerprint scanner. 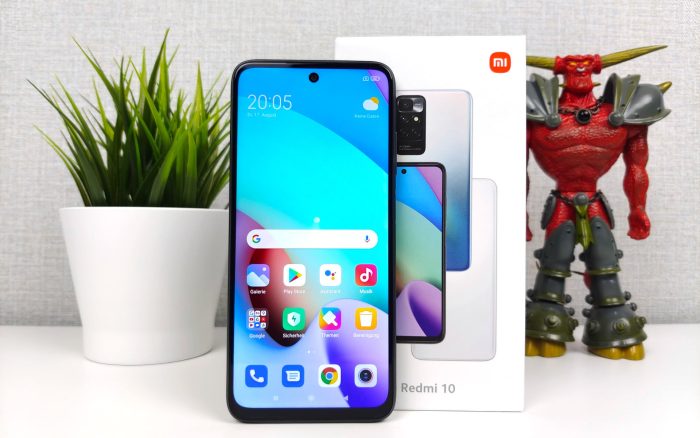 A special feature of the Redmi 10 is the stereo loudspeaker, which is normally not found in this price range. As far as the connections are concerned, we would have a USB-C socket at the bottom and a 3.5 mm headphone connection at the top. Last but not least, we would have an infrared transmitter to control TV sets and two microphones for telephony.

Nothing negative can be said about the build quality of the Redmi 10. Nothing creaks, squeaks or gives up after a two-week test phase. Only the plastic back could be a bit prone to scratches, depending on how it is used. 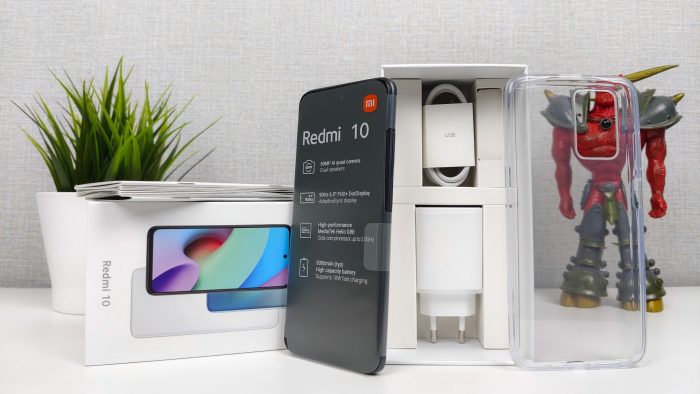 In addition to the smartphone, the scope of delivery includes a silicone protective cover, a 22.5W fast charger, a USB-C cable, a SIM needle and a quick guide.

The display is a 6.5 inch dot display with a resolution of 2400 x 1080 pixels. Of course, I would have liked an AMOLED display better, but that would not necessarily have been expected at this price. At least Xiaomi offers us a 90 Hz refresh rate, which makes the display appear a lot smoother.

On my test device, I had to change the refresh rate to 90 Hz via the settings. The default setting is 60 Hz. There is no Adaptive Sync mode, i.e. the automatic adjustment of the frame rate, in the settings. Although Xiaomi advertises the Redmi 10 with this feature. 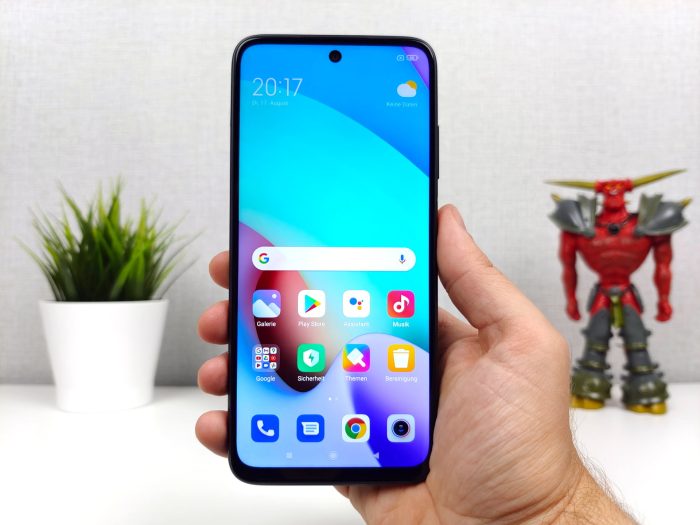 The display's color reproduction is good, albeit moderate and far removed from the crisp colors of an AMOLED. In the settings, the color temperature and the color mode (vivid, saturated and standard) can be adjusted later. The contrast of the display is a bit weak. A decreasing contrast ratio is particularly noticeable when viewing the display at an angle. The content is still legible. It is quite possible that Xiaomi has not installed an IPS panel here, but an ordinary LCD. After all, the display type is not specified in the specifications.

The maximum display brightness is sufficient for the display to remain legible in the sunshine. However, the Redmi 10's display reaches its limits in direct light. The automatic brightness adjustment succeeds promptly.

The display is protected by Corning Gorilla Glass 3, a protective glass that is considered scratch-resistant and shatterproof. The touchscreen reacts quickly and recognizes inputs precisely.

The Helio G88 is the successor to the Helio G85. The only differences are the 90 Hz display support and the compatibility with 64 MP camera sensors. When it comes to storage, you can choose between 4 + 64GB, 4 + 128GB or 6 + 128GB. The RAM is of the LPDDR4x type, the internal data memory of the eMMC type. The data memory can be expanded with a microSD memory card.

So much for the technical side. Much more important is how the performance of the Redmi 10 is to be assessed. Although the SoC is not exactly one of the strongest, the smartphone can be operated smoothly for the most part. The Redmi 12.5 copes well with fast scrolling and swiping through the MIUI 11 user interface (Android 10). Only in the web browser, on demanding websites, can it get a bit clunky when scrolling quickly. However, that is grumbling at a high level.

The loading times of apps and games are average. But this point is also not unpleasant and corresponds to the price range. Mobile games such as PUBG were reasonably playable in the test with HD graphics and a high refresh rate. Jerks usually occur when textures are reloaded. Casual gamers definitely get their money's worth. However, if you expect a lot of performance in mobile games, you should look around in a higher price range. 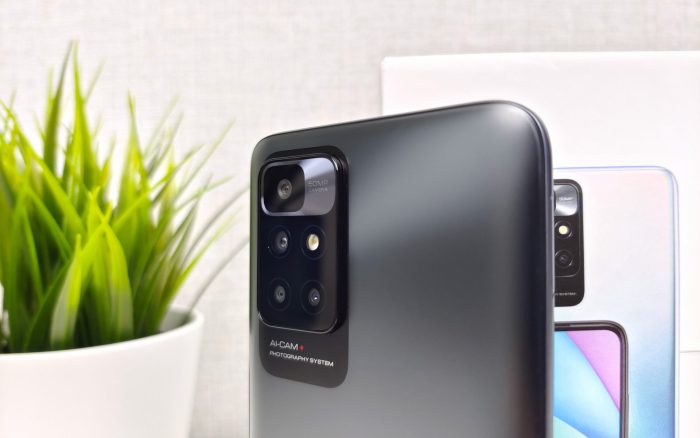 The Redmi 10 is the first smartphone to use the new 50 MP Samsung S5KJN1 image sensor.

In daylight, usable recordings are possible with the main camera. Image sharpness, colors and level of detail are correct and appropriate for the price range. The noise component is also kept low. 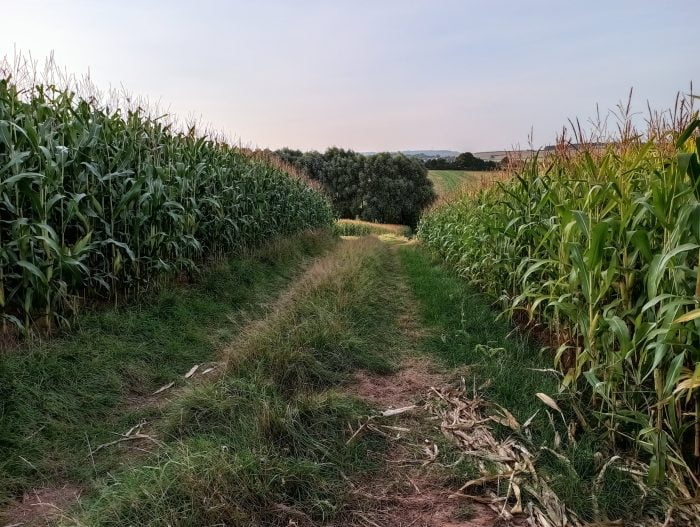 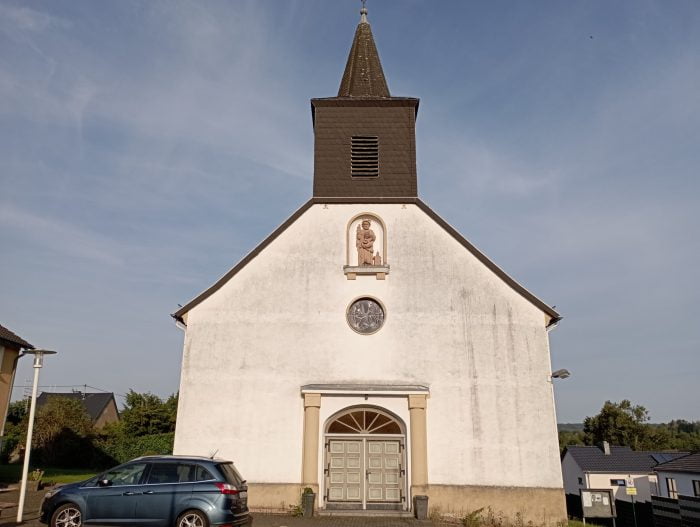 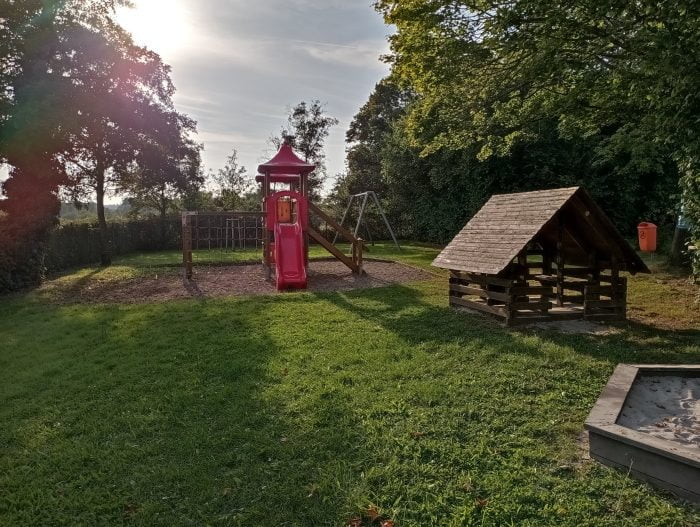 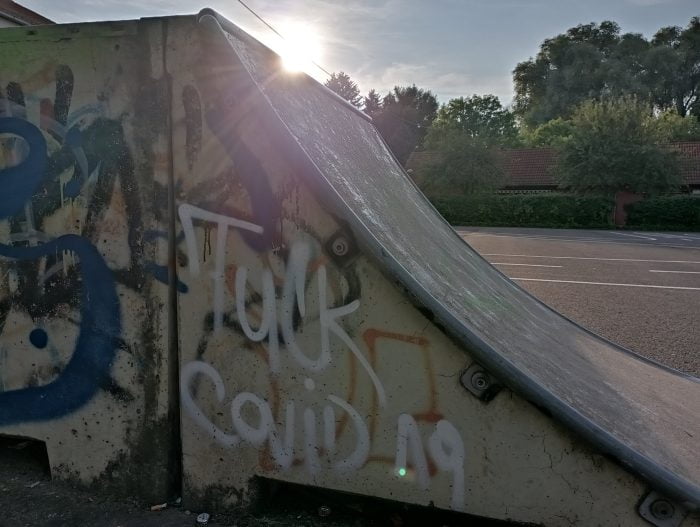 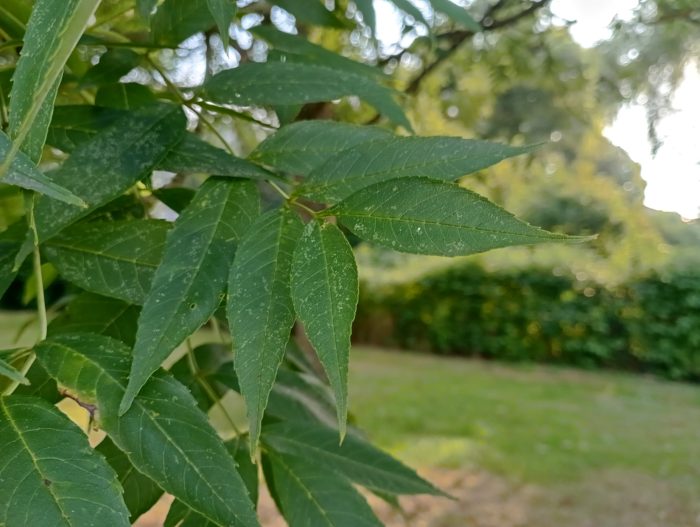 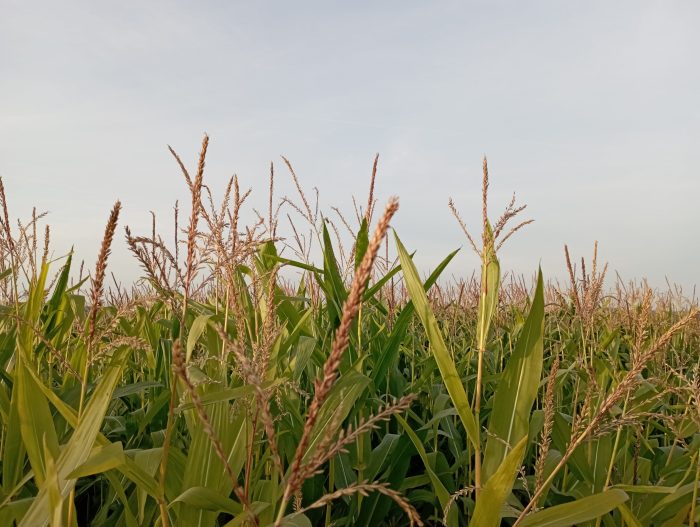 So-called pixel binning, i.e. the grouping of pixel blocks, achieves a higher light sensitivity and at the same time improves the signal-to-noise ratio. That's why photos are only saved in 50 MP despite the 12 MP sensor. A separate 50 MP recording mode is also available, but it is much more a nice-to-have than it offers more added value.

The Redmi 10 is particularly difficult for high-contrast scenes. The dynamic range quickly reaches its limits here. However, the automatic HDR mode offers a good balance. You should definitely activate this! 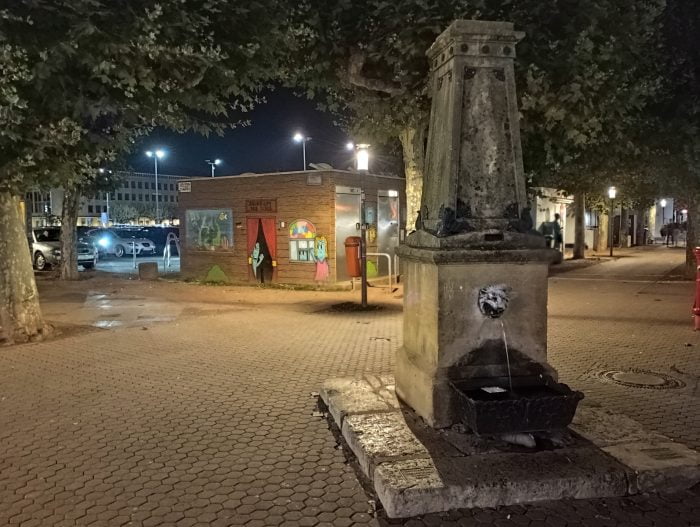 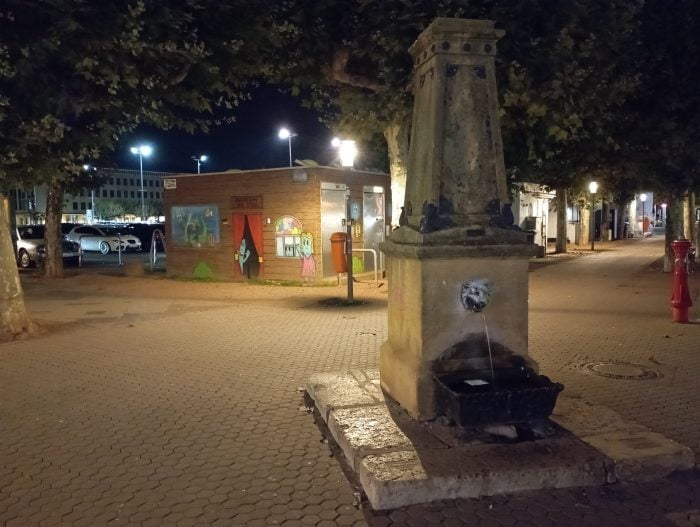 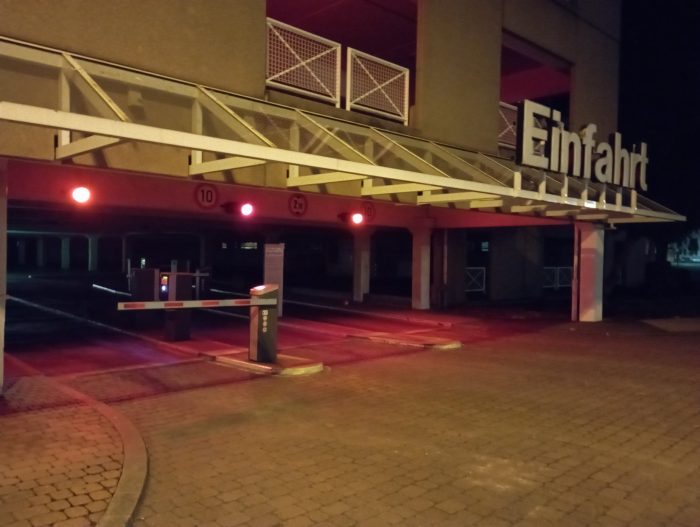 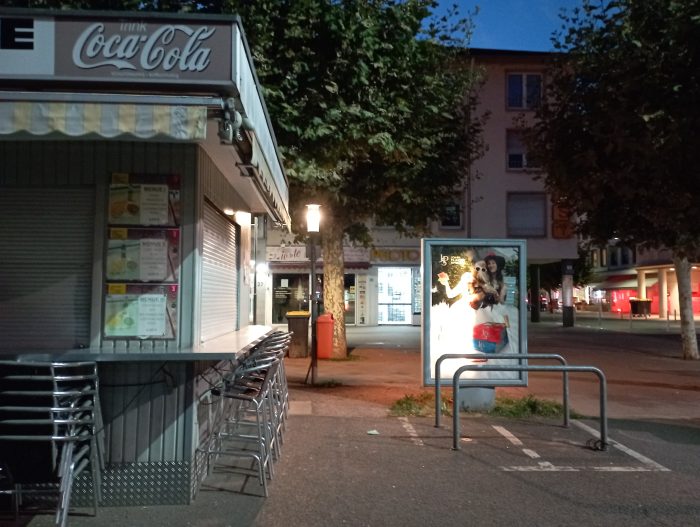 In poor light conditions, especially at night, the recording quality decreases noticeably. Details are increasingly being lost and colors appear washed out. Night mode only helps to a limited extent by slightly increasing the image dynamics and level of detail.

The ultra-wide-angle camera, which delivers surprisingly good images for this price range, is a positive surprise. Strong colors, good image sharpness and barely noticeable distortion at the edges characterize the recording quality. 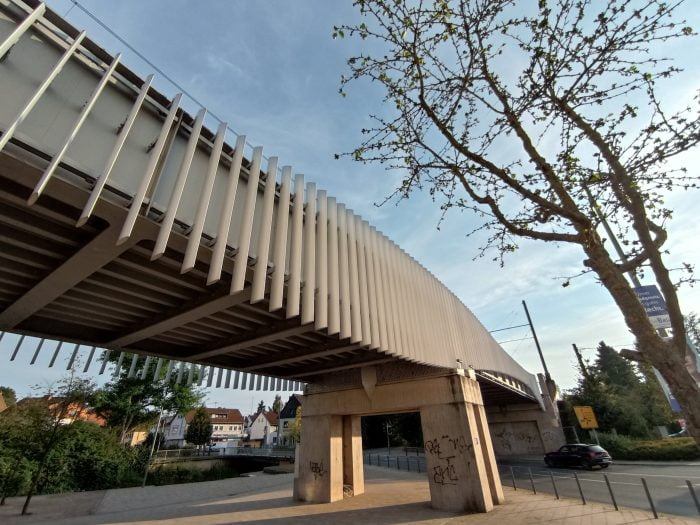 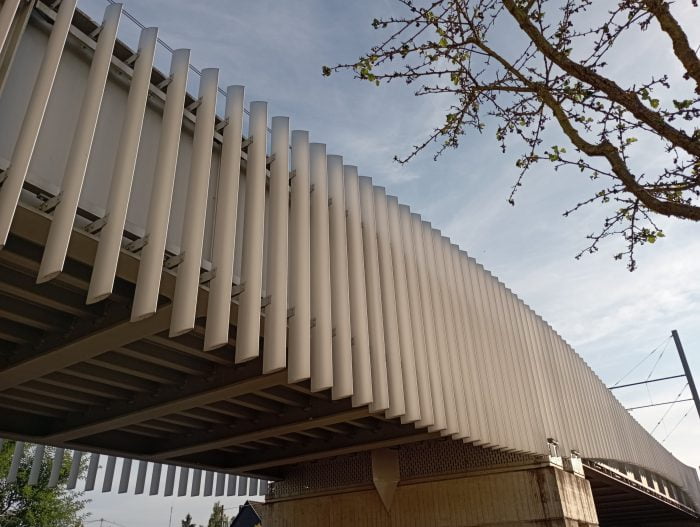 Macro camera and depth sensor are - as is so often the case - not a functional gain. At best, you will try the macro function 1-2 times. Bokeh recordings succeed in good lighting conditions with clean blurring. The 8 MP front camera is sufficient for selfies or video calls.

In contrast to the photos, the video function is disappointing. On the one hand, video is recorded in a maximum of 1080p at 30 frames per second, on the other hand there is no useful electronic image stabilization. When you're as shaky as I am, you just can't record any usable videos. You can get an idea of ​​the video quality here:

The Redmi 10 scores particularly well in terms of connectivity. The smartphone covers all of the 2G, 3G and 4G mobile radio frequencies or bands commonly used in Europe. The cell phone reception is strong and the voice quality, both via the handset and the hands-free function, is excellent. Interfering noises are very well suppressed by the second microphone without affecting the quality. VoLTE and VoWiFi are both supported. 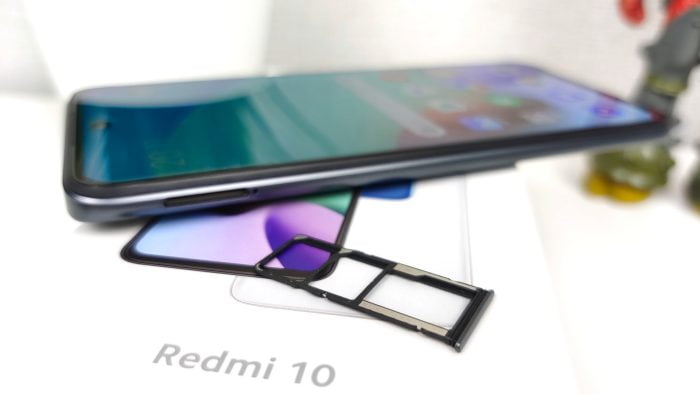 Again, there is nothing wrong with it. In the WLAN, the Redmi 10 impresses with a good range and decent data throughput. Bluetooth is available in version 5.1.

The Redmi 10 is able to navigate without deviations and dropouts. The smartphone determines the exact position within a few seconds. The smartphone uses GPS and the satellite navigation systems Galileo, GLONASS and Beidou to determine its position.

The sensor system includes an acceleration sensor, an e-compass, a proximity sensor, an ambient light sensor, a virtual gyroscope and an e-compass. That's pretty standard so far. 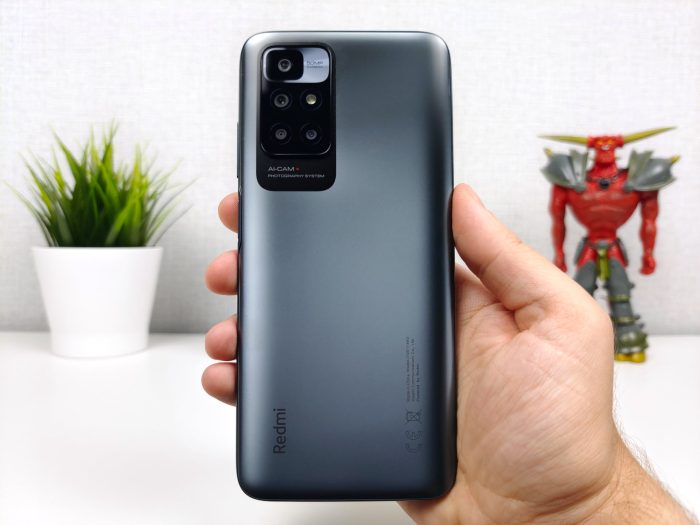 The IR blaster (infrared transmitter) is a special feature. In combination with the pre-installed "Mi remote control" app, various electrical devices such as televisions, audio systems or DVD players can be controlled via the smartphone. However, it must be a device with an infrared receiver. A wide list of manufacturers and devices is already preconfigured in the app.

The availability of NFC, which is particularly important for mobile payments, is important. Here you have to pay attention to which version of the Redmi 10 you want to get. There is no NFC in the global version. The EU version, on the other hand, supports NFC and thus also enables mobile payment (Google Pay).

The fingerprint scanner is integrated into the power button on the side. The recognition rate is good and the smartphone is unlocked quickly. 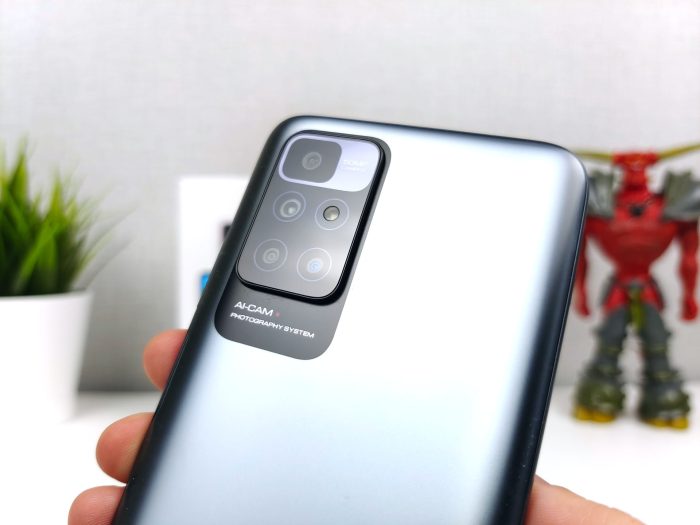 A stereo loudspeaker is normally not found in this price range. Instead of using the earphones as an additional loudspeaker, the Redmi 10 has built in a loudspeaker at the top and bottom of the frame. The sound quality is good and exceeds that of an ordinary mono speaker. Still, you shouldn't expect powerful sounds with rich bass.

With the 5000 mAh battery of the Redmi 10, you can get through the day without any problems. With average usage, i.e. a bit of telephony here and there, WhatsApp, web browsing and a bit of YouTube, more than 2 days of running time are realistic.

The 18 watt “quick charge function” is not as fast as you might think. A charging process of 1 - 100 percent takes just over 2 hours. By the way, you can use the Redmi 10 as a power bank. Devices can be charged with up to 9 watts in the opposite direction (reverse charging).

How high does the price for a smartphone actually have to be? As the Redmi 10 proves very well, there is already a smartphone for less than 200 euros that offers pretty much everything that the average consumer needs.

Still, it won't be very easy for the Redmi 10. If you already spend a few euros more, you sometimes get better devices that, for example, have an AMOLED panel instead of a 90 Hz dot display or support fast 5G mobile communications. Such devices can be found not only with the competition, but also with Xiaomi itself, which seem to bring new smartphones onto the market every week. The differences are usually only in the design and the details. So where do you draw the line?

If the personal (price) limit is below 200 euros, then Redmi 10 is an extremely interesting entry-level smartphone, with which the price-performance ratio is right and we can make a recommendation without hesitation. 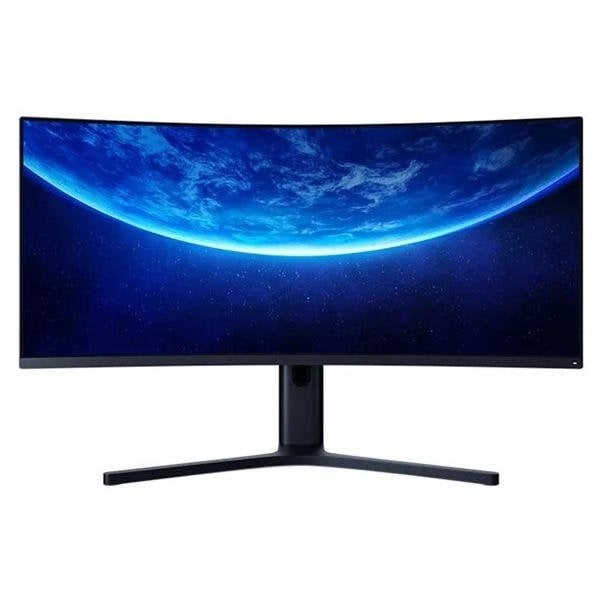