by Timo17. April 2020
The still young brand "Realme" presents its new flagship smartphone Realme X50 Pro. From just € 599, interested parties can get top hardware with the currently most powerful Snapdragon 865 chipset. 5G and WiFi 6 ensure the best possible connectivity. The icing on the cake is a lavish battery with SuperDart Charge technology on top. All information about the Realme X50 Pro at a glance.

There is news about the high-end Realme smartphone. The official sales partner Edwaybuy currently has the smartphone on offer. On sale you can buy the Realme X50 Pro reduced for only 525 € Kaufen.

To get the price you need a coupon, which you can call up in the box below. The shipping takes place between May 08th and 11th.

Realme, a brand of the Chinese BBK Electronics group, which also includes OPPO and OnePlus, is heading for Europe. The manufacturer presents a 5G flagship smartphone with similar features that is significantly cheaper than the competition from Samsung or even Xiaomi. It will take some time before the Realme X50 Pro is launched. First from April should the smartphone in two colors and three memory designs appear. The following prices can be assumed:

The heart of the Realme X50 Pro is currently the most powerful Qualcomm mobile processor “Snapdragon 865”, The chip, which is manufactured in the 7nm process, comprises 8 cores, which in turn are divided into four Cortex-A77 power cores and four Cortex-A55 energy-saving cores. The maximum clock speed is 2.84 GHz. To keep the system cool no matter what task, a so-called "Vapor Chamber" used. This means that the Adreno 660 GPU can also reach its full potential when gaming.

The mobile processor is supported by 8GB or 12GB LPDDR5 memory, The guarantees fast writing and reading of data 128GB or 256GB UFS 3.0 data storage, The Realme X50 Pro is also up to date when it comes to connectivity X55 modem the Snapdragon 865 supports the current 5G cellular standard and is LTE Cat 24/22 compatible. Slow WiFi has also had its day with the new Realme smartphone. A FastConnect 6800 WLAN module is installed Wi-Fi 6 (802.11ax) supported with 8 × 8 MU-MIMU. This enables transmission speeds of up to 10 Gbps. Bluetooth is in version 5.1 available.

Realme uses a simple design with a matt finish for its new model Glass back, The colors Rust Red and Moss Green are available. The 6.44 inch display takes up almost the entire front. The display type used is a Samsung Super AMOLED display with a resolution of 2400 1080 x pixels, By the 90 Hz technology 90 frames per second are displayed, which makes movements appear particularly fluid. Gamers in particular benefit from the 90 Hz refresh rate in combination with the 180 Hz sampling rate of the touchscreen.

A striking feature of the smartphone front is the so-called "Punch hole", a recess in the display that surrounds the front camera. The case frame of the 158.96 x 74.24 x 8.9 mm
large smartphones weighing 205 grams are made of metal. The Fingerprint scanner is hidden under the display and should unlock the smartphone within 0.27 seconds. 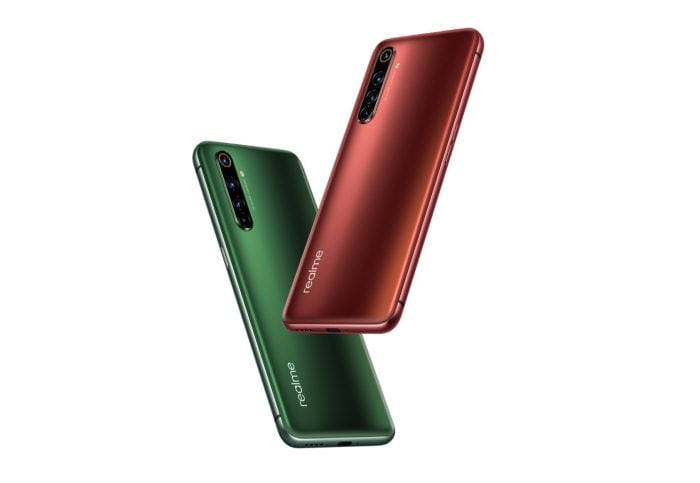 The main camera of the Realme X50 Pro form a total of 4 sensors. The main sensor is a 64MP Samsung GW1 sensor with an f / 1.8 aperture. A telesensor with 12MP resolution and f / 2.5 aperture enables a lossless 2x zoom and 20x hybrid zoom. The third sensor in the bundle resolves with 8MP and uses an f / 2.3 aperture. With its 119 ° shooting range, ultra wide-angle shots and macro shots up to 3cm focus can be taken. A 2MP black / white sensor with f / 2.4 aperture ensures a pleasant depth of field blur when taking portraits.

The main camera records videos with a maximum 4K @ 30 resolution. At low HD resolution (1080p), up to 60 frames per second are possible. Stabilization is done electronically (EIS). The Realme X50 Pro with the improved is especially for night shots Night Scape 3.0 Mode. The front camera is divided into a 32MP Sony IMX616 image sensor with f / 2.5 aperture and an 8MP second sensor with f / 2.2 aperture and 108 ° wide angle.

For a powerful sound Stereo speakers with Dolby Atmos surround sound technology available. A 3.5 millimeter headphone jack is missing. Instead, wired headphones can be connected via USB-C. Lossless music playback is also possible wirelessly thanks to the APTX, APTX HD and LDAC audio codecs. Mobile payment with the smartphone works thanks to NFC. The operating system is Realme UI based on Android 10.

The built-in battery has one Capacity of 4.200 mAh, That is enough to get the user safely through the day. The fast charging technology used is called "SuperDart Charge", It is charged with up to 65 watts, so that the battery is full again in just 30 minutes. A suitable quick charger is included. Unfortunately, wireless charging (Qi) is not supported despite the glass back.

Good price, but let's be honest. The camera is really junky compared to the rest. No wonder that a Mi 10 or Galaxy S20 costs € 300 more.