by Timo19. November 2020
The Realme 7 5G smartphone was officially launched. Equipped with a 120 Hz display, a 5G-compatible MediaTek Dimensity 800U and 30 watt dart charge, the mid-range smartphone leaves little to be desired. We have been testing the inexpensive 5G smartphone for a few days. First impressions and information about the Realme 7 5G await you in the following article.
Overview
Manufacturer/Model

Realme adds surprisingly quickly and presents shortly after the launch of the Realme 7 and Realme 7 Pro another smartphone of the 7 series. The focus of the Realme 7 5G stands MediaTeks Dimensity 800U chip, the fast one 5G cellular reception into the smartphone middle class. Here is an overview of all the key points: 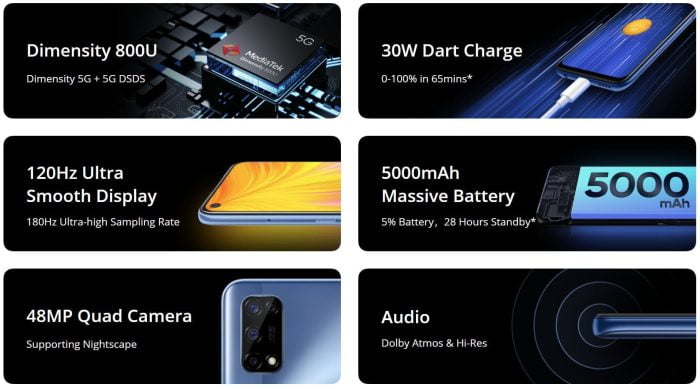 "Why another plastic bomber?" - you might think that if you read the data sheet of the Realme 7 5G. Almost the entire housing is made of Acrylic. If it weren't for the one on the right Power, in which the Fingerprint scanner is built in. This is made of metal. 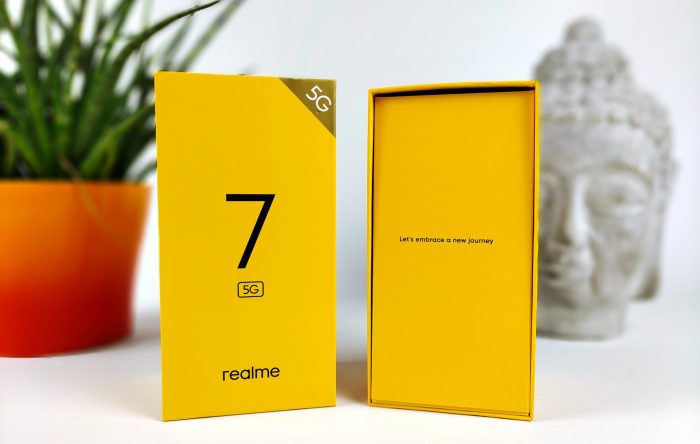 However, the Realme 7 5G is a good example that it doesn't always have to be a “high quality” case. The processing is successful and in the color "Mist Blue" the smartphone does a lot optically. Alternatively, the smartphone is in color "Flash Silver" erhältlich.

Depending on the incidence of light, there are subtle reflections on the back, which are also interrupted by a vertical stripe. In matters Size (162.2 x 75.1 x 9.1mm) and Weight (195g) the Realme 7 5G is typical mid-range average. Through the total rounded design the smartphone is comfortable to hold and easy to use. 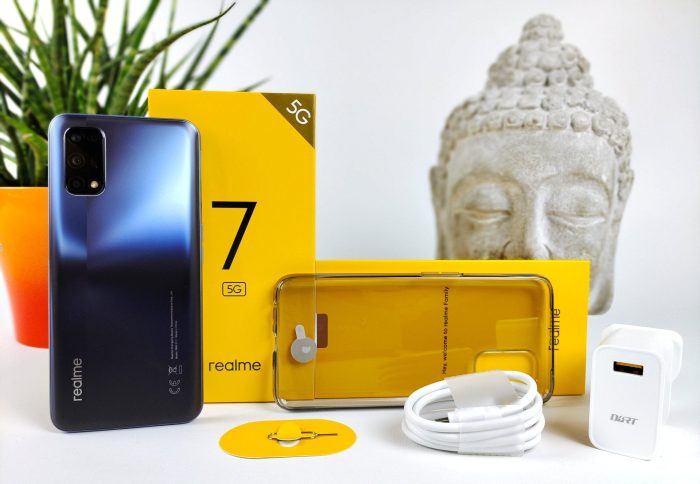 The Realme 7 5G uses a display 6.5 inch IPS panel with a 2400 1080 x pixels Resolution. The Display-to-body ratio (Screen-to-Body) gives Realme 90.5 Prozent at. The screen protector is of the type Corning Gorilla Glass. It is not known which generation of Gorilla Glass it is. Information on the maximum display brightness is also not given. We will provide precise measurements of luminance and color accuracy in the final test report.

The Dimensity 800U chip not only brings 5G into the inexpensive middle class, but also enables smooth 120 Hz refresh ratewhich the Realme 7 5G fortunately makes use of. The advantages of a significantly higher refresh rate are smoother image gradients. This not only benefits gamers, for whom responsive actions are important, but also everyday users who expect an overall smoother user experience. A higher one sampling rate, here 180 Hz, means that the touchscreen reacts faster to inputs. An advantage that also benefits gamers.

Of course it has a 120 Hz display too Disadvantages. Mention should be made of the higher battery consumption that results from the increased performance, but also that not every app or mobile game supports a full 120 FPS or the processor reaches its performance limits early on. 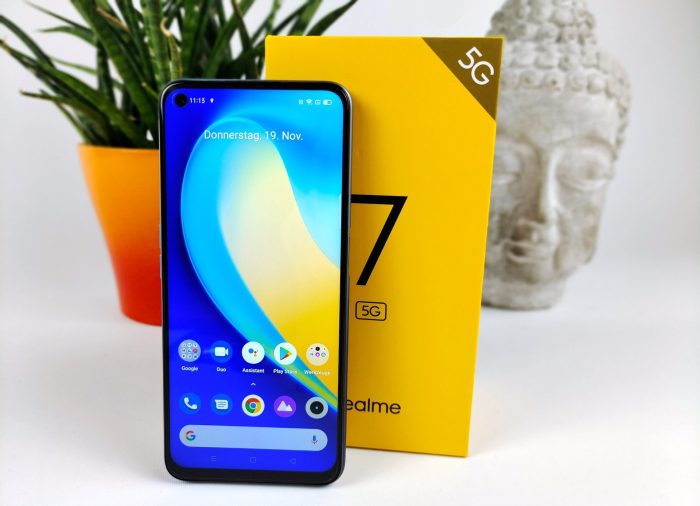 It's visibly and noticeably fun to savor the 120 Hz of the Realme 7 5G display. The smartphone can soft as butter serve. Animations are made without trailing effect and when scrolling through the web or the social media feed quickly, the text remains pleasantly in shape. As already indicated, the Dimensity 800U is the bottleneck that limits 120 Hz enjoyment in demanding games.

The heart of the Realme 7 5G is that MediaTek Dimensity 800U System-on-Chip. This combined CPU, GPU and 5G modem. Eight processor cores are divided into two fast Cortex-A76 cores with maximum 2.4 GHz Clock rate as well six economical Cortex-A55 cores with maximum 2 GHz Clock frequency. The GPU is one ARM Mali G57. When it comes to storage, the smartphone comes in 6GB LPDDR4X RAM and one 128GB UFS2.1 data store. 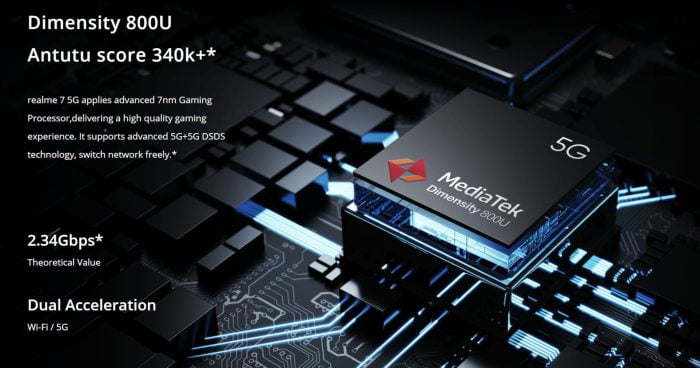 It is possible to use the memory with a MicroSD memory card to expand, but then one of the SIM slots (hybrid SIM slot) is lost. At least that would be the case with our test device. On the manufacturer's product page is a Triple SIM slot with two nano SIM slots and one memory card slot listed. That's not the only difference either. This is our test device NFC enabledalthough NFC is not mentioned on the data sheet!

Update: We checked with Realme. The retail version corresponds to our test device. So there is no triple SIM slot, but one Hybrid SIM slot, as well is NFC available!

The Dimensity 800U has enough power. This is also shown by the benchmarks we performed, in which the Realme 7 5G scores well. Im demanding AnTuTu Benchmark be in cut 330.000 points reached. These high scores are also reflected in everyday performance.

That up Android 10 based Realme UI (User interface) is very well matched to the hardware and enables largely fluid operability. In addition, Realme UI offers a extended range of functions, but not too far removed from stock Android. Except for a few Third-party apps (Facebook and WPS Office) the user interface is free of bloatware. 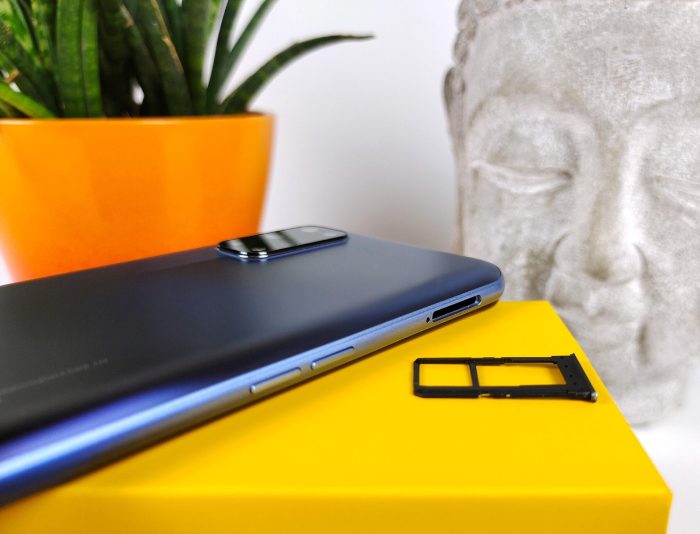 In addition to mobile communications, there are also wireless connections Dual AC WiFi and Bluetooth 5.1 to disposal. The Realme 7 5G uses the navigation satellite systems to determine its position GPS, AGPS, Glonass, Beidou and Galileo .

We will be testing the camera extensively in the coming days. Therefore, we would like to initially only point out the equipment features. The following sensors is used:

Note: We will add to the test report in the coming days.

The Realme 7 5G is from 27. November 2020 available in the stores. Pre-orderers already receive the smartphone at a special price of 229 euros on Amazon.

Hi team, I'm interested in getting the phone in advance. But I still have a few questions that I couldn't answer myself.

1. Can I use two SIM cards with 5G?
2. Does Google Pay work?
3. What about the updates? Is Android 10 over or can you expect updates from Realme?
4. Is Netflix running?

I hope you can answer my questions. Regards Steph

Hi Steph, I'll be happy to answer your questions.

1. The smartphone supports 5G dual SIM with dual standby and 5G two carrier aggregation.
2. NFC is available and Google Pay works too.
3. An update to Android 11 in the coming weeks / months is quite likely. Realme has not yet commented on this in detail. An update to Android 12 might still be possible.
4. The smartphone is Widevine L1 certified. Netflix can be watched in high definition.

I hope I could help you with the answers :).

Unfortunately it is sold out on Amazon :(. Where else can you buy the smartphone?

Hi Pelle, the smartphone is currently only offered on Amazon. It should be available again in the next few days.

Wait too and hopefully it will work out before Christmas. "Currently not available." on amazon.