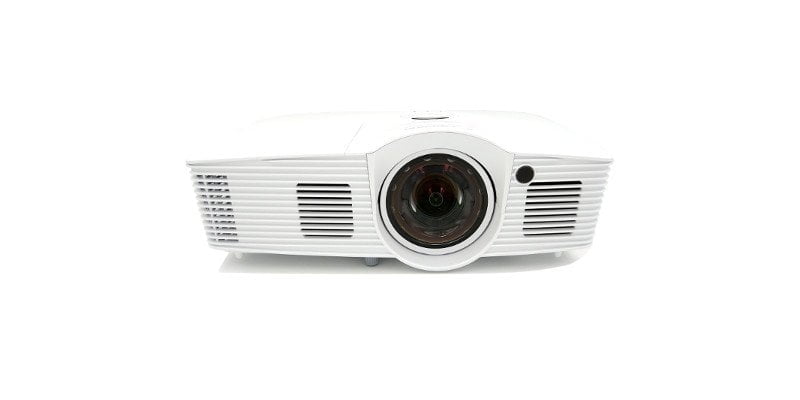 by Timo9. August 2017
The Optoma GT1080 Darbee is a short throw projector with integrated DARBEE visual presence technology designed to deliver a sharper image and a more realistic image. For this test report, the projector was used over a period of 4 weeks in everyday life.
Overview
Manufacturer/Model

Unlike conventional projectors, are Short Throw Projectors Like the GT1080 Darbee, it is able to project an extensive picture at the shortest distance. Sense makes such a beamer, especially where there are no mounting options or the projection distance due to shadows can not be met. Even gamers benefit from short throw projectors, which is why the Gaming suitability was included in the test. 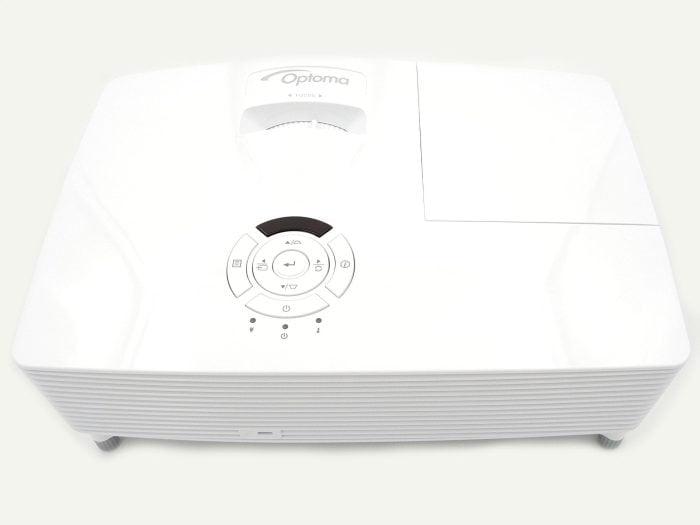 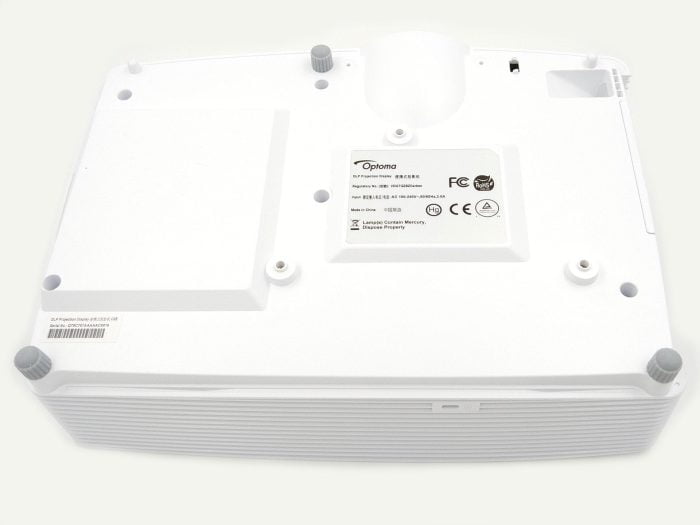 With Dimensions of 31.5 x 22.4 x 11.4 cm and a Weight of 2.66 kg the projector is comparatively compact and is therefore also suitable for a movie night with friends. The beamer can be used standing as well as hanging. On the bottom there are three rubberized and height-adjustable feet, as well as a Ceiling mounting option, To protect against theft, the projector can be back with a Kensington lock be provided.

On the one hand, the GT1080 Darbee can be operated via the operating surface above the glossy white plastic case, as well as the supplied Remote Control, The focus is on a mechanical knob. There is no optical zoom option or optical lens shift. The connection options Optoma has placed this device on the left side of the case. These are two HDMI 1.4a sockets with 3D and MHL 1.2 support, an 3.5 mm audio output, an 12V output, a USB-A socket with an output voltage of 1A, a USB mini-B socket and an 3D sync port. There are no other video interfaces like DVI or VGA. The build quality convinces. 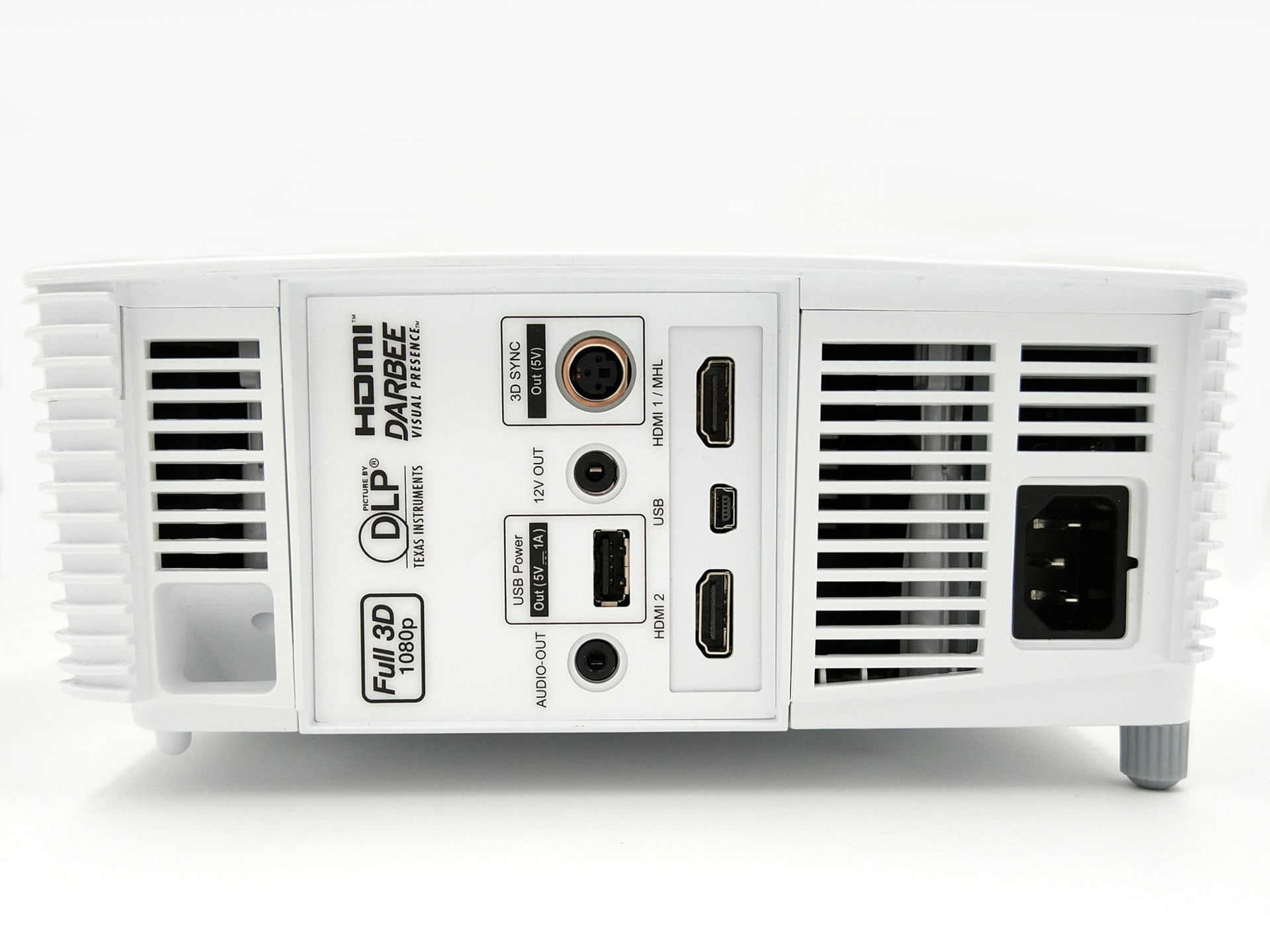 The Optoma GT1080 Darbee is a Full HD DLP projector with .65 "DC3 chip from Texas Instruments. The maximum possible Brightness is 3.000 ANSI lumens. The Konstrastverhältnis specifies Optoma with 28.000: 1. Depending on which display mode is used, the Lifespan of the lamp from 5000 to 8000 hours. A speaker is integrated.

The Beamer is advertised with the "Darbee Visual Presence Technology", which provides above all for a particularly clear picture with better depth of field. Also part of the game is Optomas "Amazing Color"After which the projector adheres to the Rec.709 color scheme and more accurate and rich colors are displayed. The so-called "Dynamic Black Technology" optimizes the contrast ratio and adapts to the scene. By the 3D support Pretty much any 3D video footage can be leaked.

As already indicated, the projector has no optical zoom. Although a digital zoom is available, unlike an optical zoom, the image can not be enlarged without loss. However, since this is a short throw projector, you can "zoom in manually" by slightly shifting the distance. The maximal Screen size lies between 45,3 "and 300", at a distance between 0.5 and 3.35 meters. Optionally, the projector with the Optoma HDCast Pro dongle in a Wifi be integrated so that playback material can be received wirelessly. 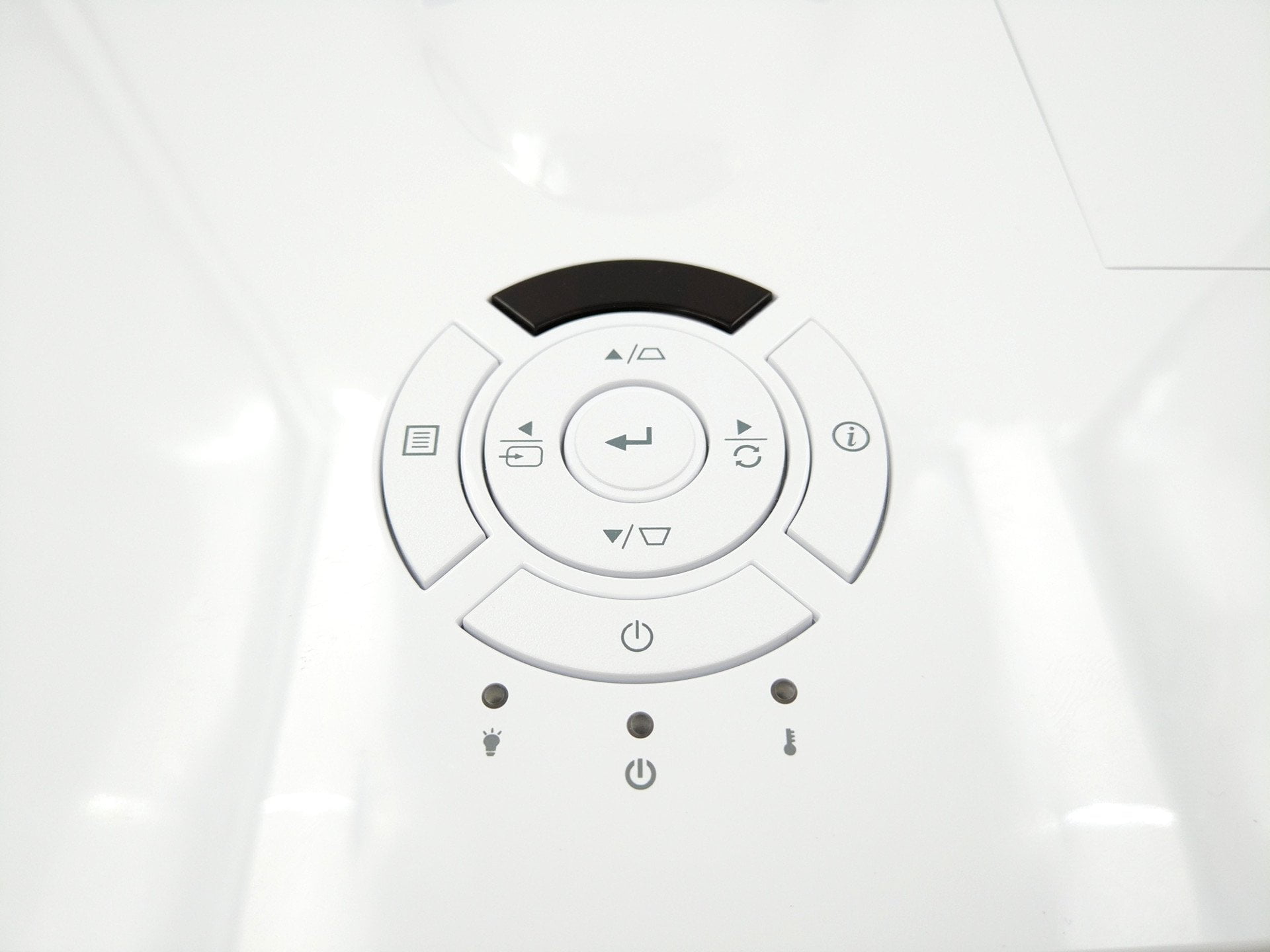 Commissioning is not associated with any hurdles and can also be carried out by a technical layman. If the beamer is connected to the power, only the playback device must be connected via HDMI and after a really short warm-up phase the picture already appears. Connected devices are automatically detected and selected as the source with the first connection.

The operation can on the one hand via the device itself, or via the supplied Remote Control respectively. No matter which operating option you choose, all functions can be accessed via both operating modes and are clearly indicated by symbols as well as a caption (remote control). In addition, the remote control is illuminated in blue so that the GT1080 Darbee can be operated easily in the dark. Whether you stand in front of, next to or behind the projector, the infrared remote control works from any position. Three LED indicators on the top of the projector provide additional information about the operating status. 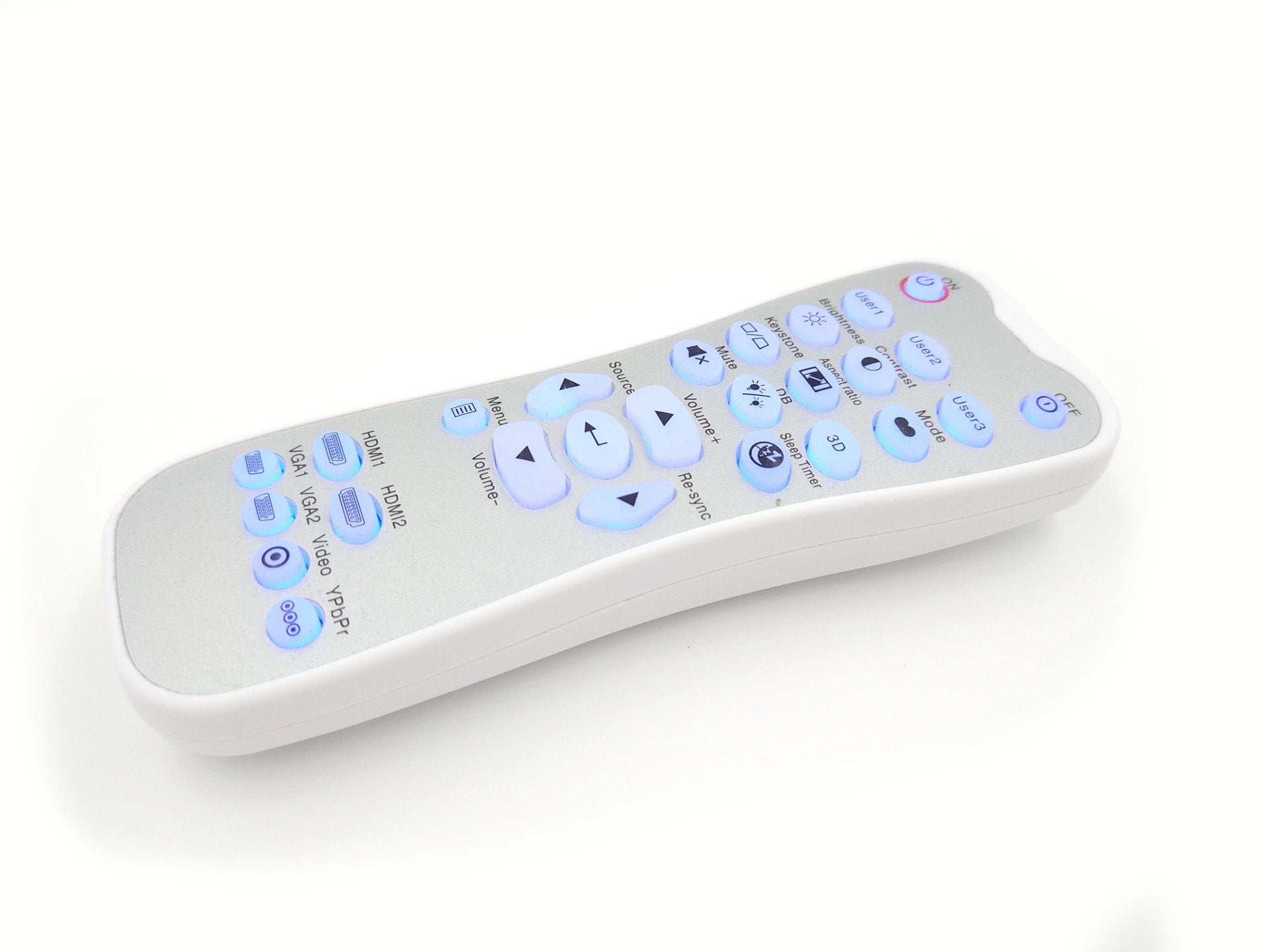 As a short throw projector, the Optoma GT1080 Darbee is already capable of one Distance of less than a meter an about 90 inches big and especially to project high-resolution image. In home theater, the projector compares well. A total of 5 display modes are available by default. A custom mode allows you to create your own preset.

If you turn on the projector for the first time, this is in the so-called "Vivid display mode", This creates a particularly bright picture, which is especially suitable for the not completely darkened room. However, the contrast is rather moderate in this mode. Dark hues appear slightly washed out in Vivid mode. Dark scenes are covered with a visible gray haze.

In the darkened room above all convinced "Game" and "Cinema" display mode, Combined with the Darbee & Dynamic Black technology, it produces a very sharp image with excellent depth of focus, rich colors and acceptable contrast. The intensity of the Darbee technology can be customized within the display settings. The fan volume of the beamer is comparable to other devices. In bright mode, the projector is quite audible. In ECO mode, the fan noise the movie experience never disturbed. At normal TV or movie volume, the fan noise is simply lost. The integrated Loudspeakers delivers a balanced sound with high volume, which allows the projector without external playback source for one or the other film can be used. 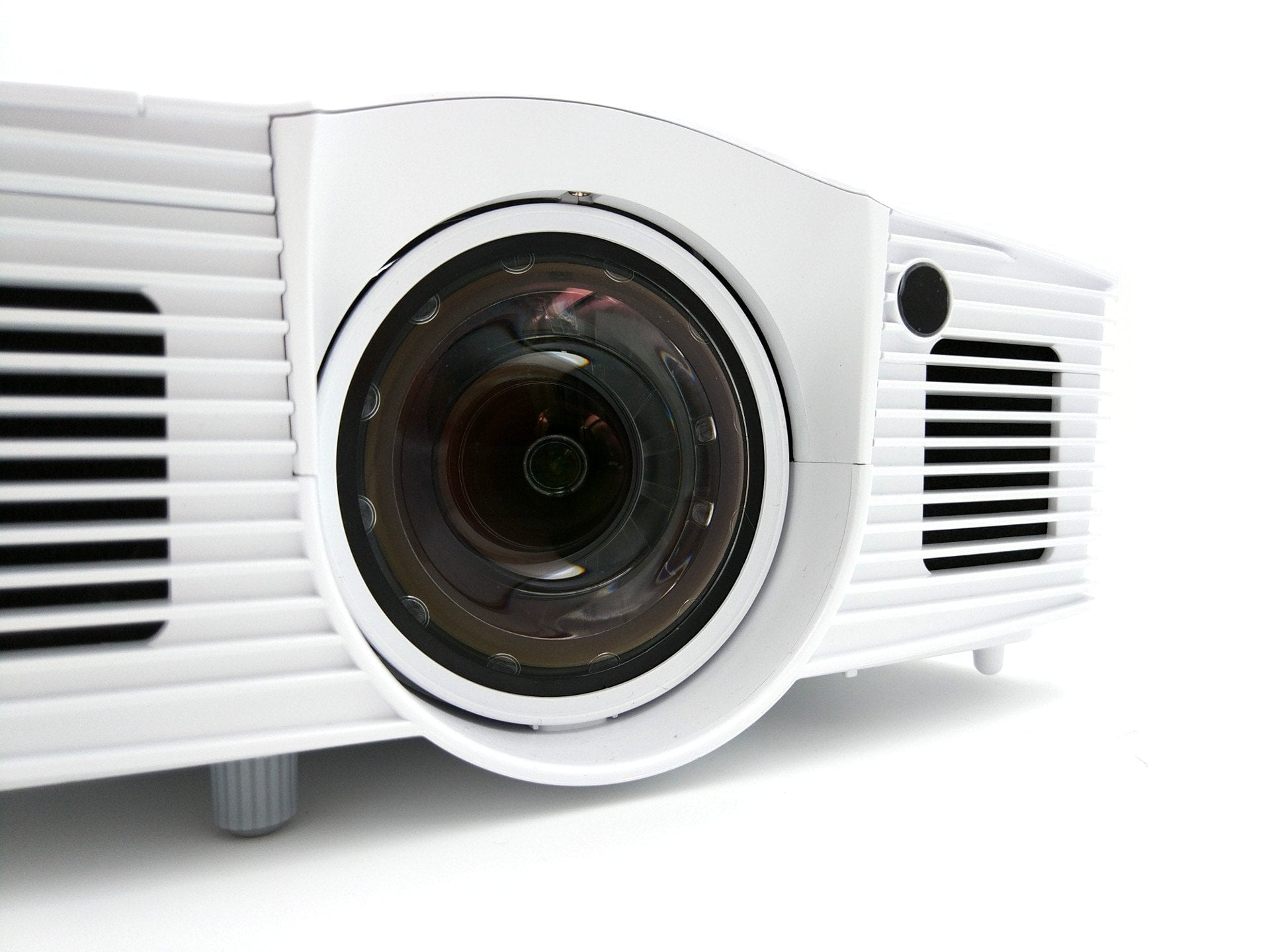 The Optoma GT1080 Darbee wants to be one of the best gaming projectors. For this the device is with a "Enhanced Gaming Mode" which reduces the response time from 33 ms to 18 ms. Compared to current gaming monitors, the GT1080 Darbee still hangs behind. Especially experienced PC gamers, who especially prefer shooters, will feel the difference between a responsive monitor and the GT1080 Darbee. On the other hand, for consoleros who play mostly on TV, the difference is unlikely to be significant. The Darbee technology has made a particularly positive impression during gaming. Due to the increased sharpness, textures appear particularly detailed. The caused by many DLP projectors "Rainbow effect" has hardly occurred during the test phase.

The Optoma GT1080 Darbee is a versatile projector suitable for the home cinema user as well as the console player. As a short throw projector, the GT1080 Darbee can be set up virtually anywhere and its compact size also makes it suitable for a movie night with friends. The beamer was especially convincing due to the outstanding color brilliance, the pleasant operating volume (ECO) and the Darbee technology, which ensures particularly sharp textures in gaming. 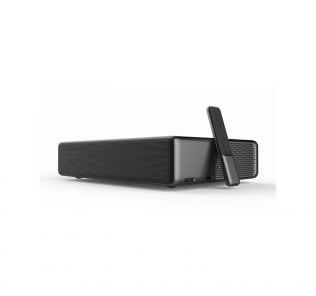 The picture is very good, even if the room is not completely darkened. But the blacks are not deep black, but that does not bother me at all. The projector runs nice and quiet. I'm very satisfied.