by Timo29. October 2018
The OnePlus 6T was officially launched. The new top-of-the-range OnePlus smartphone range includes a larger display with smaller Notch and an in-display fingerprint scanner. The smartphone is available from 549 €. All further information about the equipment, prices and availability, see the following article!
Overview
Manufacturer/Model

In terms of design, OnePlus largely sticks to the look of the OnePlus 6. The back is made of hardened Corning Gorilla Glass 6, which is characterized by a high scratch and breakage resistance. External influences keep the OnePlus 6T as well as the previous models made of solid metal.

Gone is the backside fingerprint scanner, which was still under the main camera at the predecessor. Instead, the OnePlus 6T uses one in the display glass integrated fingerprint scanner, This is not only completely invisible, but also promises a high detection rate at low Entsperrzeit. Also new is the clear more compact notch, Instead of a broad beam, one has for a simple one tropical design decided, the decent to the front camera lays. OnePlus housed the receiver inconspicuously between the edge of the display and the case frame.

The display is of the type AMOLED and solve one Diagonal of 6.41 inches with 2280 x 1080 pixels on. Of the sRGB and DCI-P3 color space are fully supported. By the 19.5: 9 image format the smartphone is slightly narrower (74.8 mm), but also slightly longer (157.5 mm) than its predecessor. The display is protected by Corning Gorilla Glass 6, Gadgets such as an adaptive brightness mode or a special reading and night mode are of course on board. 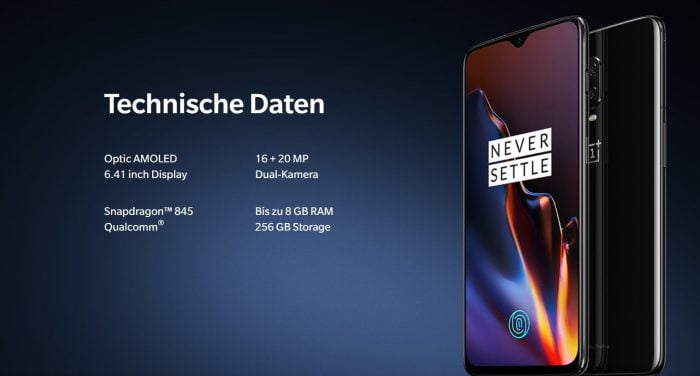 And every day the Snapdragon 845 greets you

This is installed High-end system-on-chip "Snapdragon 845" from Qualcomm. A total of 8 Kryo 385 processor cores, With the up to 2.8 GHz clock, give the smartphone a lot of steam. Compared to last year's SoC, the Snapdragon 835, the Snapdragon 845 works about 30% faster. Despite the extra power Qualcomm has the Energy Efficiency again optimized by 10%. The processor graphics the SoC is the Adreno GPU 630, which offers enough power to play current mobile and AR games fluently.

So that hardware and software harmonize best possible, OnePlus has the so-called "OxygenOS", which is based on Android 9, optimized again. In order not to unnecessarily slow down the processor, background processes that are not visible are regulated, among other things.

In addition to a fast processor is also one high-performance memory connection crucial. Here OnePlus relies on one LPDDR4X RAM, as well as one UFS 2.1 2-Lane data store, The size of the working and data memory differs according to the respective model variant. No matter which model you choose, a fluid multitasking is provided by the lush and fast memory equipment. A memory expansion by means of MicroSD memory card is not provided.

The sensors of the OnePlus 6T camera are identical to those of the previous model. Both sensors are from Sony. The main sensor is on 16 Megapixel Sony IMX 519 with an 1.22 μm pixel size and a f / 1.7 aperture, A optical and electronic image stabilization stabilizes not only video recordings, but also photos, which at night better shots are possible. The so-called "Bokeh" effect (Image capturing with depth effect) is by the secondary 20 Megapixel Sony IMX 376K Sensor you can 1.0 μm pixel size and f / 1.7 aperture allows.

Videos takes the smartphone in 4K with up to 60 images-per-second on. The "Super Slow Motion" Motion slowed down with up to 480 pictures-per-second (720p) dar. The front camera forms one 16 Megapixel Sony IMX 371 Sensor with fixed focus, f / 2.0 aperture and electronic image stabilization. 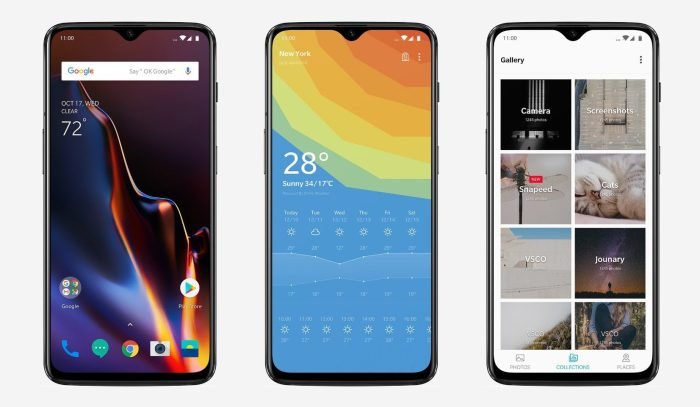 Like the predecessor models, the OnePlus 6T is also included Smartphone with global mobile support (37 different bands), A dual-SIM usage is possible and both slots are LTE-capable. So that one also in the Wifi is fast on the move, the 4x4 MIMO standard unterstützt. Bluetooth is in version 5 to disposal. Precise navigation is provided by the satellite systems GPS, GLONASS, BeiDou and Galileo realized. NFC is available.

Let's come to the end Accumulator, This one has one Capacity of 3700 mAh, Fast recharge the battery thanks to a 5V 4A fast charge function, The charging socket is of type USB-C. A Qi charging function is not available for the OnePlus 6T. Pity!

OnePlus 8 Series - All information, price and availability
look at

Oneplus was an advocate of the jack socket. Do not you understand that they have decided against it now. And still no contactless loading ... Do not skin me all so really off the peg.

No one needs it anyway. Adapter ran and finished. Can you continue to use your 3.5mm headphones? I think these are really good steps the OnePlus is taking. Same camera but improved software. That's the way it should be. Who needs a new camera on every phone, which is not really well optimized. I really like the design with the little notch as well. Missing QI charging function, well you do not really need it.

You can buy it now at Gearbest! Habs just ordered and it will be shipped in a few days. Become berchiten when it arrives. ????