OnePlus 6 - All information, price and availability

by Timo16. May 2018
The OnePlus 6 was officially launched in London. The new top-of-the-range OnePlus smartphone series is equipped with an 6.28 inch display, the powerful Snapdragon 845 SoC and a high-quality glass back. The smartphone is available from 519 €. All further information about the equipment, prices and availability, you can find on the point in the following post!
Overview
Manufacturer/Model 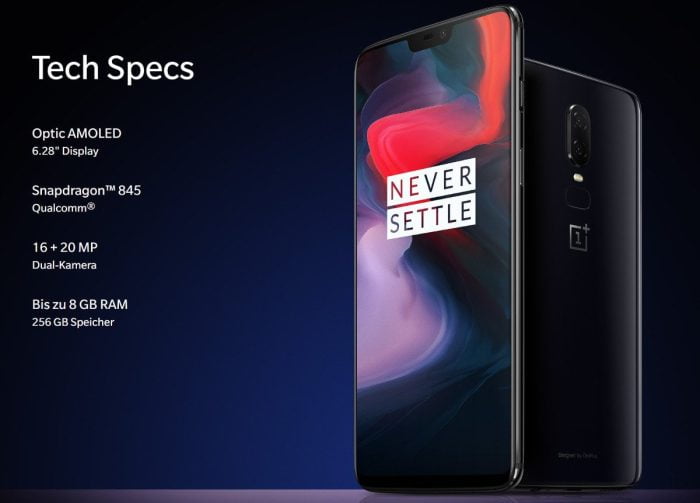 OP6 on Amazon OP6 at OnePlus

Elegant design with glass back

So far, OnePlus has always avoided major design changes. With the OnePlus 6, however, the manufacturer ventures on new fields and no longer relies on a full metal case, but on one Housing with glass back, Anyone who thinks of a high fragility is wrong. The glass used for the back and front is so-called "Gorilla Glass 5" by Corning, which is characterized by a high scratch and breakage resistance. External influences should be able to withstand the OnePlus 6 as well as the predecessor models made of solid metal. By using waterproof materials, the smartphone is also available Splash-protected, The emphasis, however, is on "SPRITZWASSER". In the water, the OnePlus 6 has guaranteed nothing lost! 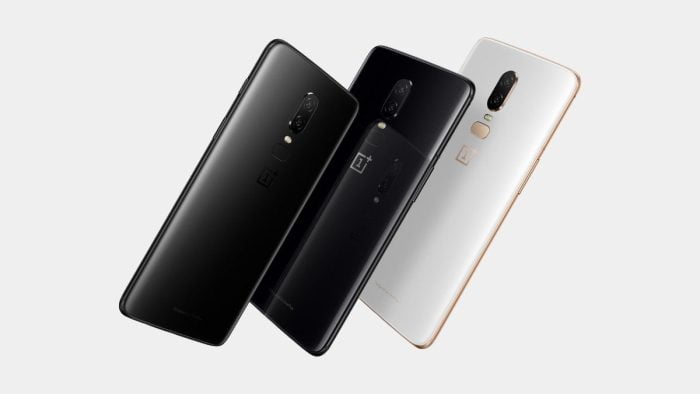 For a visual finish, the three different color variants, The newly introduced color "Mirror Black" gives the smartphone a shiny look that looks and feels like a ceramic. The old-known "Midnight Black" gives the smartphone by the matte black surface a predominantly discreet look. The color "Silk White" ensures a soft mother-of-pearl effect with a slightly shimmering surface.

Although that is OnePlus 6 (155.7 x 75.4 x 7.75 mm) size technology hardly from OnePlus 5T (156.1 x 75 x 7.3 mm) different, the smartphone offers enormous 6.28 inch display with 2280 x 1080 pixel resolution, The larger display diagonal is made possible by the (often hated) "Notch", The same was true aspect ratio adapted, now at 19:9 lies. There are no changes regarding the used display technology, The display is still of the type "Optic AMOLED", whereby a deep black and particularly rich colors are achieved. The display is protected by Corning Gorilla Glass 5, Gadgets such as an adaptive brightness mode or a special reading and night mode are of course on board. 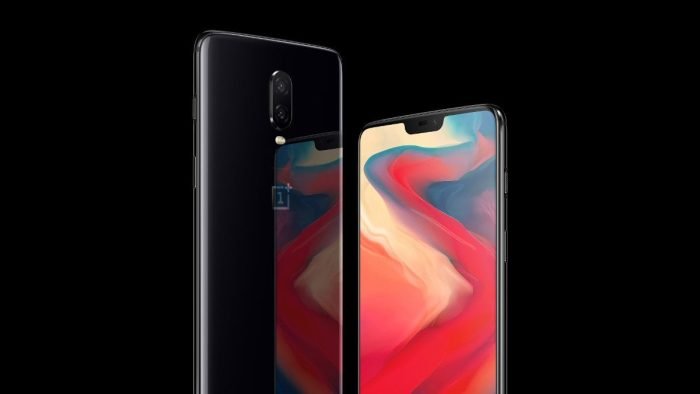 You do not have to worry about performance problems with the OnePlus 6. Installed is the current one High-end system-on-chip "Snapdragon 845" from Qualcomm. A total of 8 Kryo 385 processor cores, With the up to 2.8 GHz clock, give the smartphone a lot of steam. Compared to last year's SoC, the Snapdragon 835, the new Snapdragon 845 works about 30% faster. Despite the extra power Qualcomm has the Energy Efficiency again optimized by 10%. The processor graphics the SoC is the Adreno GPU 630, which offers enough power to play current mobile and AR games fluently.

So that hardware and software harmonize best possible, OnePlus has the so-called "OxygenOS", which is based on Android 8.1, optimized again. In order not to unnecessarily slow down the processor, background processes that are not visible are regulated, among other things. As a treat, the manufacturer at the end of May, a first Android P Developer version bring to the OnePlus 6.

In addition to a fast processor is also one high-performance memory connection crucial. Here OnePlus relies on one LPDDR4X RAM, as well as one UFS 2.1 2-Lane data store, The size of the work and data storage differs as already mentioned according to the respective model variant. No matter which model you choose, a fluid multitasking is provided by the lush and fast memory equipment. A memory expansion by means of MicroSD memory card is not provided.

The OnePlus 6 comes with a dual main camera fitted. Both sensors come from Sony, of which the main sensor, a Sony IMX 519, only appeared in February 2018. The native resolution of the Sony IMX 519 is 16 Megapixel, at a Pixel size of 1.22 μm, Other features are one f / 1.7 aperture and optical and electronic image stabilization (OIS + EIS), Stabilized are not only video recordings, but also photo shoots, which at night better shots are possible. The so-called "Bokeh" effect (Image capturing with depth effect) is by the secondary 20 Megapixel Sony IMX 376K Sensor with an 1.0 μm pixel size and f / 1.7 aperture allows.

Videos takes the smartphone in 4K with up to 60 images-per-second on. The "Super Slow Motion" Motion slowed down with up to 480 pictures-per-second (720p) Cutting videos directly on the smartphone becomes easier and does not require an additional app. OnePlus has its own Video Editor integrated, which includes various cutting effects and filters. The front camera forms one 16 Megapixel Sony IMX 371 Sensor with fixed focus, f / 2.0 aperture and electronic image stabilization. The "bokeh effect" should soon be possible with the front camera. A corresponding software update has already been announced by OnePlus.

Like the predecessor models, the OnePlus 6 is also one Smartphone with global mobile support (37 different bands), A dual-SIM usage is possible and both slots are LTE-capable. So that one also in the Wifi is fast, the newest 4 × 4 MIMO standard unterstützt. device is in version 5 to disposal. Precise navigation is provided by the satellite systems GPS, GLONASS, BeiDou and Galileo realized. NFC is available. On Fingerprint scanner was placed backside underneath the camera. A RGB notification LED is as present as one 3.5 mm jack audio output.

Let's come to the end Accumulator, This one has one Capacity of 3300 mAh, Fast charge the battery thanks Dash Batch (5V 4A), The charging socket is of type USB-C. If you have hoped for a Qi charging function by using the glass back, you will be disappointed. OnePlus has decided against inductive charging. Pity!

As soon as a test copy of the OnePlus 6 reaches us, the detailed test follows!

OP6 on Amazon OP6 at OnePlus

Hello people, when is your test report? I'm really excited, because your reviews are really great.

Hi Herib, thank you for liking the reviews. The test copy is on its way and should arrive the next week. The review should go online in 4 weeks.