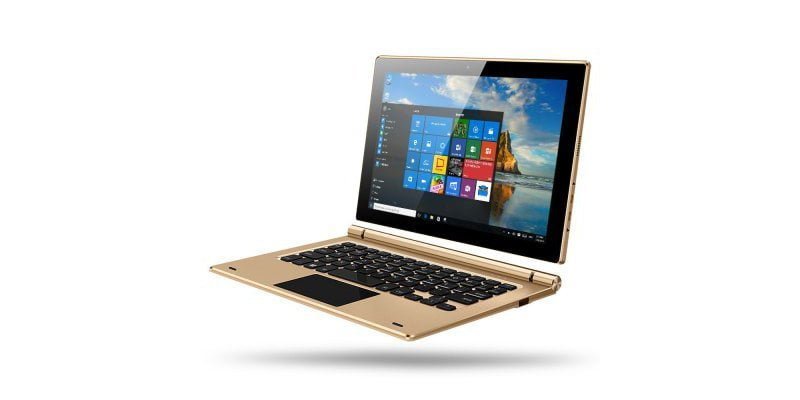 Inexpensive China tablets and notebooks under € 200 have a high probability of having an Intel Cherry Trail Z8300 processor installed. This meanwhile older processor of the Intel Atom series is suitable for an executable Windows 10, but the performance suffers significantly from the weak processor solution. The Onda oBook 10 Pro uses a significantly faster Intel Cherry Trail Z8700 processor, which now belongs to the old league, but appears to be much more powerful overall.

The Intel Cherry Trail X7 Z8700 processor is one of the fastest processors in the processor series that was released in early 2015. The processor, manufactured using the 14nm process, has a total of 4 cores, the basic clock rate of which is 1.6GHz and which increases in bursts to up to 2.4GHz. The Microsoft Surface 3 also uses the same processor. With the integrated Intel HD processor graphics, not too demanding games can be played smoothly. The processor is not suitable for 4K video streaming.

With a 4GB RAM, the device is well equipped for a smooth Windows 10 feeling. The 64GB internal memory should also be sufficient for conventional use. If you need a larger memory, you can expand it by a maximum of 128GB with a micro SD memory card.

The tablet can be connected to an external screen or projector via a micro HDMI socket on the side. A USB 3.0 socket ensures fast data transfer. For all those who do not only want to use the integrated loudspeaker, the Onda oBook10 Pro also has a 3.5mm headphone input. A keyboard can optionally be connected via the docking interface. The tablet is charged via a DC socket, which is also located on the side of the housing.

The supported WiFi standards are 802.11b / g / n. Dual-band WiFi is unfortunately not supported by this device. For those who prefer to synchronize their data via Bluetooth, the tablet offers a Bluetooth 4.0 module. The oBook10 Pro is equipped with a 2 megapixel front camera and microphone for video telephony. The manufacturer does not provide any information about the image sensor!

The capacity of the battery is 6000mAh. The runtime should be around 6 hours because of the economical Atom processor. With intensive use, the runtime is around 4 hours. The battery cannot be replaced!

Considering the price, the Onda oBook 10 Pro offers stately features. Despite the already 2015 released processor, this tablet is quite suitable for multitasking tasks. Especially for those who find an Intel Z8300 too slow and do not need the extra performance of a Core M3-6Y30, the oBook10 Pro with Intel Atom processor is a good choice!