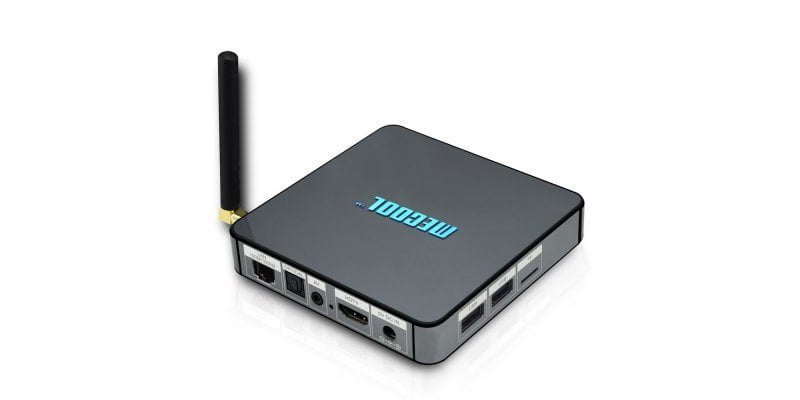 by Timo29. January
An Android TV Box is probably the easiest solution to turn a conventional TV into a Smart TV. The MECOOL BB2 Pro promises a lot and presents itself as one of the currently most powerful Android TV boxes, which supports not only Android 6.0, but also Kodi 17 in the best possible way.
Overview
Manufacturer/Model

Much of the Android TV boxes is based on a processor from the manufacturer "Amlogic". The Amlogic S912, which was also installed in the MECOOL BB2 Pro, is currently the manufacturer's most powerful processor with a total of 8 Cortex A53 processor coresthat clock with clocks 4 x 1.5 GHz and 4 x 1.0 GHz. In combination with the Mali-T820MP3 processor graphics is well catered for a high-performance interface, lossless streaming and even one or the other liquid playable Android Game. Probably the most interesting hardware feature are the 3GB DDR4 memory, which in contrast to the mostly built DDR3 memory provides even higher bandwidth. The internal one eMMC 5.1 flash memory coincides 16GB not very big, but can be retrofitted with a Micro SD memory card be extended. 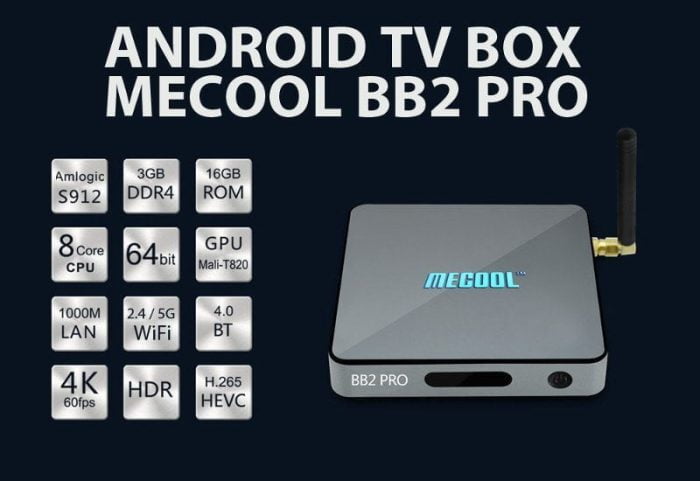 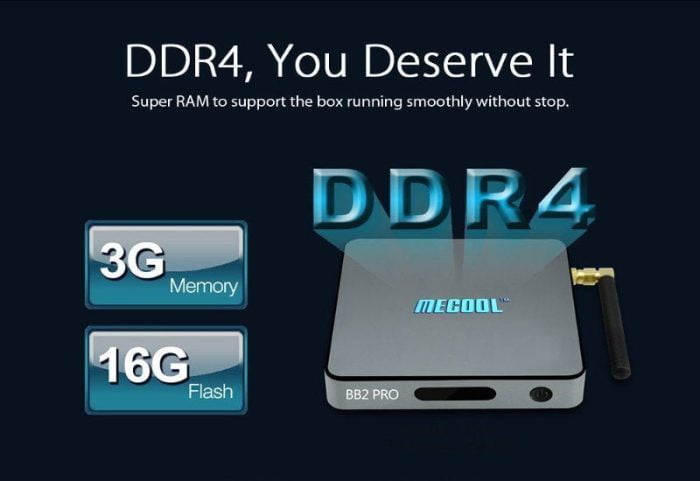 The BB2 Pro TV Box has a wide range of connectivity options. about two USB 2.0 sockets You can connect storage media and other devices with a USB port. For picture and sound transmission, the TV box has a HDMI 2.0a socket, One optical S / PDIF socket and AV connection option, The network connection can on the one hand via a Gigabit Ethernet port or WiFi respectively. All common WiFi standards (802.11 b / g / n / ac) are supported. In addition, there is an external WiFi antenna on the device, which amplifies the signal again. Another way to connect is Bluetooth 4.0, An IR remote control for easy operation is included. 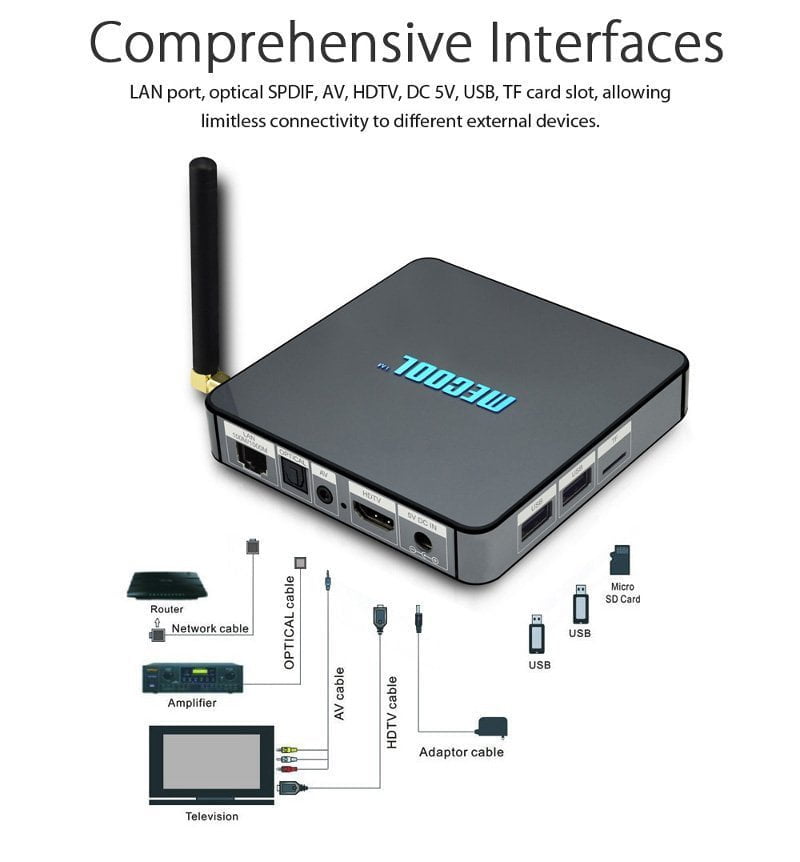 The TV box is delivered with one 64bit Android 6.0 Marshmallow. The launcher is adapted to a TV and streaming usage and has pre-installed the most important streaming apps and media players like Miracast, MX Player or Netflix. Also Kodi 17 is already preinstalled and set up. Additional apps can be downloaded and installed from the Google Play Store. Firmware updates receives the box OTA (Over The Air).

high-resolution 4K video footage can be played smoothly with up to 60 pictures per second. The current version is supported H.265 HEVC (High Efficiency Video Coding) and VP9, In addition, the MECOOL BB2 Pro HDR (High Dynamic Range) compatible. With an appropriate output device and HDR video footage, the picture appears even more brilliant and stronger in contrast. The power consumption is about one watt in off mode, about 1.3 watt in standby and 3 watt in idle. The maximum values ​​are a maximum of 4 watts.

For about 75 € the MECOOL BB2 Pro has a lot to offer and is well prepared for 4K video material. Although the differences to TV boxes from other manufacturers are rather low, for the same price, the choice of BB2 Pro with DDR4 memory is preferable. As soon as we receive our test copy for the MECOOL Android TV Box, the detailed test report will appear at this point!

Hello, I would like to share my experiences with the TV Box, which I have been running in continuous operation for 2 weeks now. I use only Kodi and that runs first class on the BB2 Pro. MP4, MKV ... files encoded with h.264 or h.265 with DTS / Dolby 5.1 are played without problems. VP9 was a bit tricky, but I got up and running with a special movieplayer. The performance is good. There is nothing to complain about. Kodi runs smoothly on it. But there are also things that bother me. Widevine for DRM content is supported only with level 3 and off still pulls the box 1W. Otherwise, the BB2 Pro is top and has my Beelink GT1 replaced.

Can I roughen the box and I can no matter what hard drive to connect?

I have a normal 2.5er USB 3.0 hard drive connected to 1TB and was recognized directly. The read times are okay, for there is only UBS 2.0. Root was already on my firmware on it. There is also a floor without root in the WWW. My build is MHC19J 20161209.

Give it a ubdate on android 7.1

No, there is no update to Android 7.1. However, a custom ROM can be found in the network, which extends the box by a few functions.

Thanks for the hint. Last year, the update was not yet ????