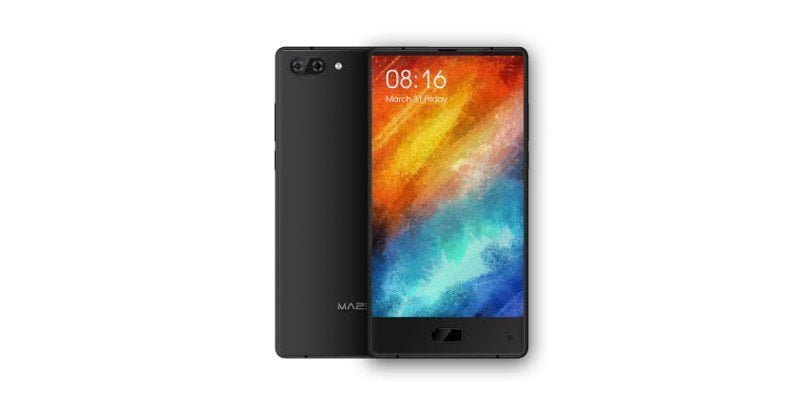 by Timo22. August 2017
The Maze Alpha is another almost rimless smartphone of the rather young manufacturer "Maze". Why we like this smartphone in addition to the many other, announced Bezel-Less phones so far the best, you will find out in this article!
Overview
Manufacturer/Model

Smartphones in the style of Xiaomi Mi Mix currently shoot like mushrooms from the ground. The Maze Alpha is now the fourth smartphone of its kind to report on. One thing the cheap almost-borderless smartphones have in common. None is available yet!

The Maze Alpha should with a 6 inch full HD display appear. Despite the large display diagonal, the smartphone is with Dimensions of 15.98 x 8.25 x 0.81 cm only slightly larger than a conventional smartphone with 5.5 inch display. With a Dot density of 367 DPI Individual pixels are barely visible to the naked eye. In contrast to DOOGEE MIX The smartphone has no AMOLED panel, but a conventional IPS panel installed. The display is protected by Corning Gorilla Glass 4. 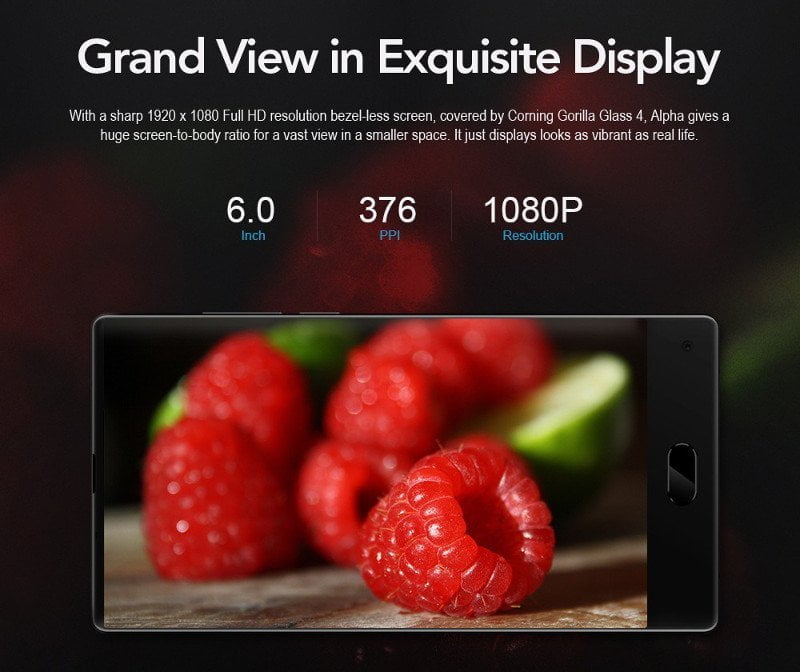 As well as that UMIDIGI Crystal and the DOOGEE mix Maze Alpha has one MediaTek Helio P25 processor installed. Overall, 8 Cortex-A53 processor cores, of which 4 cores with up to 2.5 GHz and 4 clock additional cores with 1.4 GHz, promise a decent performance with simultaneous energy efficiency. The storage equipment amounts to one 4GB large LPDDR4X memory and one 64GB large eMMC memory, A memory expansion via SD memory card is possible. Another model with a higher storage capacity (6GB / 128GB) has already been announced by Maze. 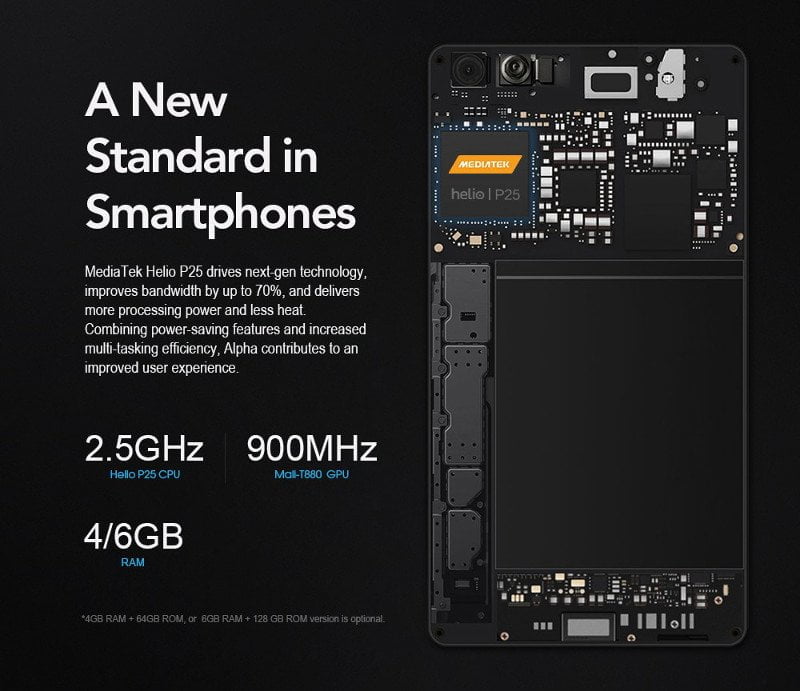 The main back camera is a so-called Dual Camerawhose sensors with 13 and 5 megapixels dissolve and the one f / 2.2 aperture used. About the 13 megapixel sensor is known that this is from Samsung and the name "Samsung S5K3L8" wearing. Incidentally, the same 1 / 3.06 "sensor is installed in the Xiaomi Redmi 3 and Redmi 4 models. The main camera captures videos in 1080p at 60 pictures-per-second. For image stabilization, as expected, there is no optical stabilization, but one electronic stabilization to disposal. The front camera uses an unspecified name 5 megapixel image sensor. 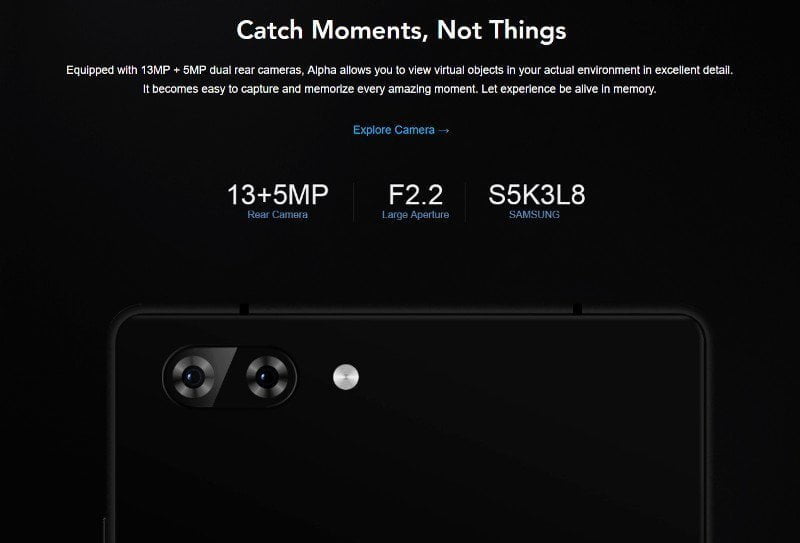 As Dual SIM smartphone the device supports the usual in this country 2G, 3G and 4G Frequencies and bands. Furthermore, it is supported WiFi with the protocols 802.11 a / b / g / n / ac and Bluetooth 4.1, You can navigate with your smartphone using GPS, GLONASS and Beidou, The physical connectivity amounts to one USB-C socket and one 3.5 mm audio connection, The Alpha sensor is equipped with a Hall sensor, a gravity sensor, a gyroscope, an acceleration sensor, an ambient light sensor, a proximity sensor and an e-compass. The front-side home button includes one at a time Fingerprint scanner.

The Maze Alpha comes with matt black case appear. The case frame consists of metal. As already mentioned, the smartphone with dimensions of 15.98 x 8.25 x 0.81 cm is hardly larger than an 5.5 inch device. The weight is 225g. The permanently installed 4.000 mAh battery promises a long-lasting battery life. For fast charging will MediaTek's Pump Express unterstützt. 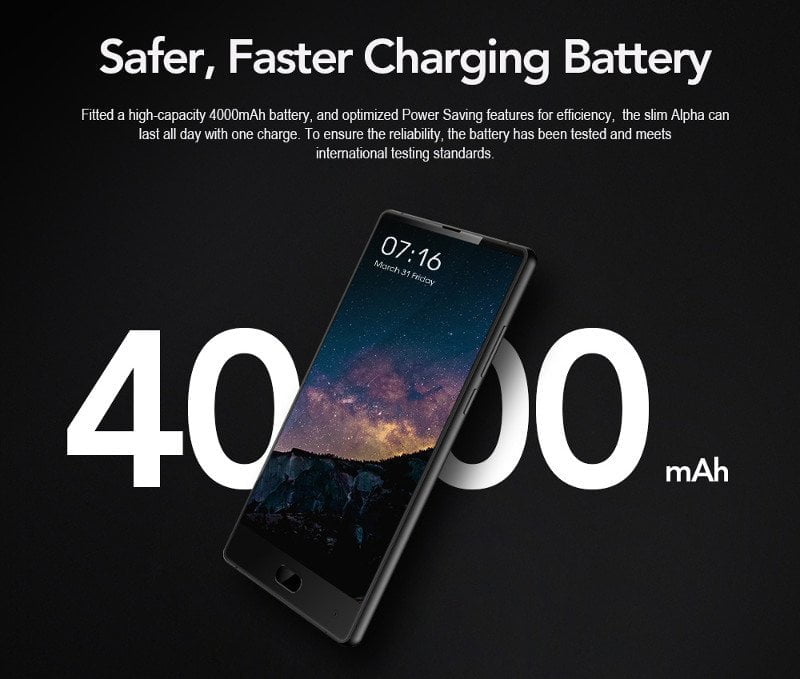 Compared to the other almost-borderless smartphones, the Maze Alpha surprised by a low sales price and at the same time decent hardware. Especially because of the high screen diagonal of 6 Zoll comes the Alpha one Xiaomi Mi Mix still next.

You are also interested in other fast-rimless smartphones? Then take a look at our articles UMIDIGI Crystal or DOOGEE MIX !

The equipment is really good for the price. Will you test it too?

Hi, yes the equipment is actually neat for the price. We're on a test copy! The test will follow at this point.