The LG 27GL850 is one of the hottest gaming monitors currently. What makes the monitor so special is the built-in nano-IPS panel. LG takes advantage of the reaction advantage of a TN panel without sacrificing the color, contrast and viewing angle advantages of IPS technology.

In combination with a 27 inch display diagonal, 2560 x 1440 resolution, 144 Hz refresh rate and adaptive sync, the LG 27GL850 is, at least on the data sheet, a dream come true for gamers. The following test report reveals whether this also applies in practice.

At Amazon there is the LG 27GL850-B at the current low price of only 349 Euros. More information on the product page.

When you hear the word “gaming”, you usually think of an extravagant design and lots of RGB lighting. The LG 27GL850-B also belongs to the gaming category, but it takes a more subtle path. The design is smart, that is out of the question, but you won't find RGB bling-bling in vain. Instead, LG focuses on a few accents that cleverly stage the black plastic of the monitor. 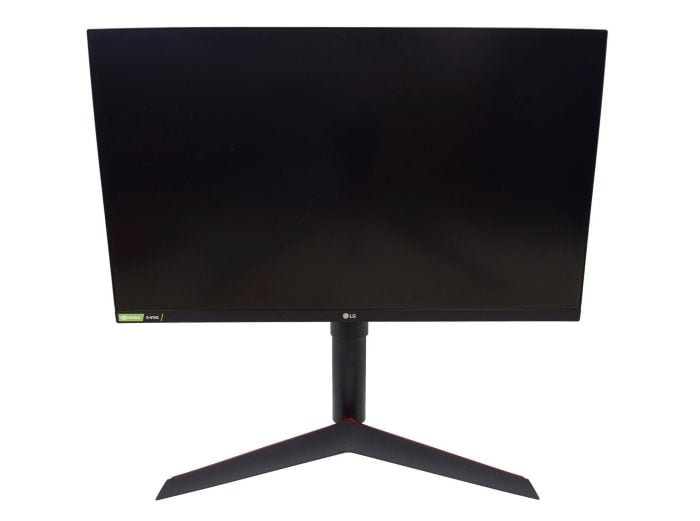 If we take a closer look at the exterior of the monitor, we have a spacious stand in the sleek V shape. The material of choice is plastic. The base is facing black and matted. On the back there is a shiny red accent.

The actual foot is followed by the transition into the support arm. This consists of a pipe system that ends in a rotating mechanism and the holding plate attached to it. The following Targeting options is there:

For better cable routing, you can use the pipe Cable holder fasten. If you find it annoying, just leave it out. The stand and monitor can be used without tools click system connect. Alternatively, wall mounting is possible (VESA 100 × 100). 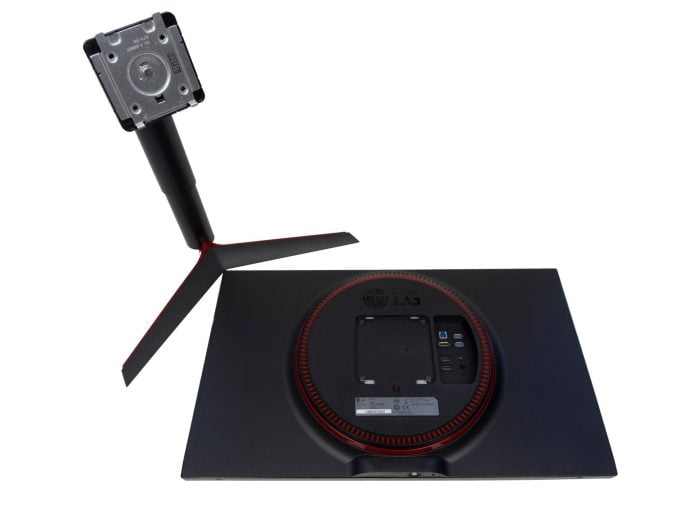 When viewed from the front, the LG 27GL850-B shows its particularly narrow edges. At the top and towards the sides, they are just 0.8 cm. At the bottom it is 2 cm. The LG logo is embossed in the middle. On the left is a sticker that is on the G-Sync compatibility of the monitor.

Before we look at the back, there are a few words about the bottom. If you use the LG logo as a guide, you can feel the joystick control on the underside. The Joystick is power button and OSD control at the same time. To the left of the joystick is the recess for Kensington lock. This allows the monitor to be secured if necessary.

All connection options are on the back. The round case lift-off with red color accent is striking for the back. Ventilation slots arranged in a circle ensure good ventilation. The connection options include two HDMI 2.0 sockets, a DisplayPort 1.4 socket, two USB 3.0 downstream sockets, a USB 3.0 upstream socket, a 3.5 mm jack audio socket and a DC power input. All sockets are easily accessible and placed at a sufficient distance from each other. 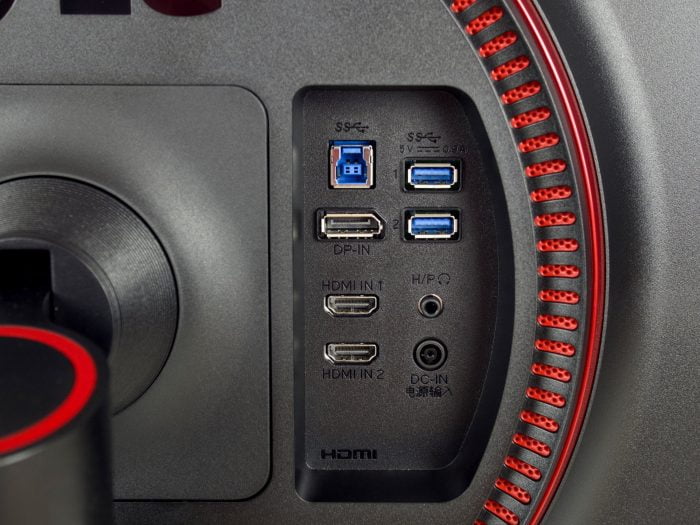 Processing quality and scope of delivery

The LG 27GL850-B is largely made of plastic, but the monitor's matting and subtle color accents do not make it look cheap. The quality of workmanship is good. All parts are assembled neatly and the mechanics of the stand run smoothly. The What's in the box In addition to the monitor and stand, it also contains a lot of paperwork, a CD with the same paperwork, a DisplayPort, HDMI and USB 3.0 cable as well as two cable holders.

Monitors with In-plane switching technology (IPS) have been on our smartphones, TVs and PC monitors for a long time. The advantages over other display technologies are particularly stable viewing angles and better color and contrast display. A disadvantage is the usually slow response time of IPS panels, which is why gamers often prefer TN panels (twisted nematic). 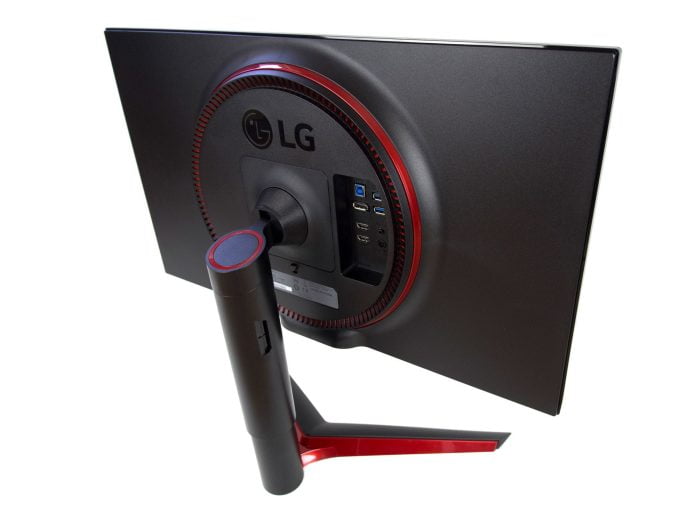 But what does it look like if you do sophisticated image and video editing and are also a passionate gamer?

To make the decision between the monitor technologies easier, LG has the so-called at the beginning of 2018 Nano IPS presented. This further development of IPS technology relies on a layer of fine nanoparticles that separate color spectra more precisely. This enables the panel to display 135 percent of the sRGB color space. The extended DCI-P3 color space is 98 percent covered. The AdobeRGB color space is 88 percent. At the same time, Nano-IPS reduces the response time to 1ms (GtG) and is therefore particularly attractive for gamers. 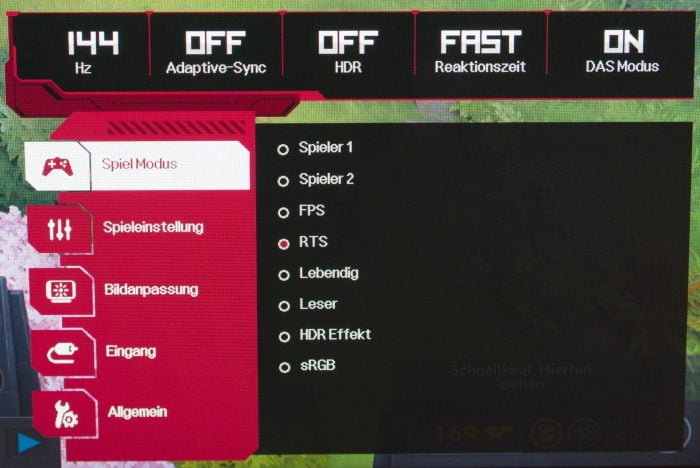 The OSD of the LG 27GL850-B is optically tailored for gamers. The active settings are clearly displayed in a bar. Below that, the menu is divided into the categories "Game Mode", "Game Settings", "Image Adjustment", "Input" and "General". In the category "Game mode" there are 8 presets to choose from. Unfortunately, only the first preset is freely configurable. In the other modes, more extensive settings for brightness or color temperature are usually not possible.

Under the category "Game Settings" Settings options for Adaptive Sync, the black stabilizer, the response time and a On-screen crosshairs. The other categories do not differ from other monitors. Options include brightness, image sharpness, color temperature and gamma.

As an option to the OSD, the monitor can be operated via the LG OnScreen Control Use the application. The for Windows and MacOS Available software makes it possible to access the essential monitor settings with a click of the mouse. In addition, the application offers extensive Split screen function and one Picture-in-picture display mode.

We have the image quality of the LG 27GL850-B based on the default settings (Player 1, brightness 100, contrast 70, sharpness 50, gamma mode 2) and the specified presets were tested. 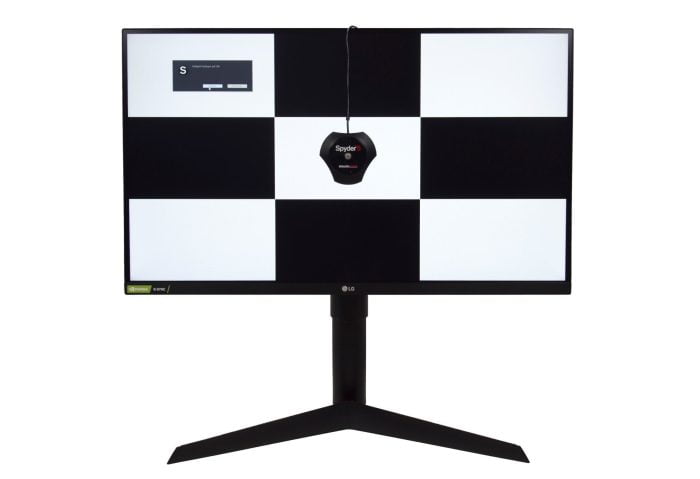 The monitor is extreme viewing angle stable. Strongly horizontal and vertical viewing angles hardly affected the display. There are no noticeable color deviations and no noticeably reduced contrast. The monitor shows weaknesses in terms of illumination. So-called is done on a black surface Backlight Bleeding noticeable. Uneven radiation from the background lighting occurs at the edges of the display. The so-called is also available and typical for IPS panels IPS glow. This is noticeable through slight, angle-dependent brightening of the panel. Both can be seen in the following picture. The picture was taken in the dark with a slight overexposure. 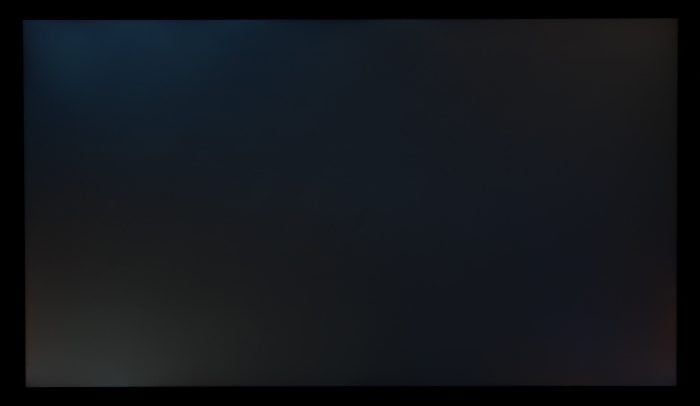 Except for the somewhat cool color temperature, the LG 27GL850-B is well calibrated ex works. The most common sRGB The monitor covers the color space 100 percent from. AdobeRGB, which is considered the standard in professional color image processing 89 percent covered. The comparatively young one DCI-P3 The monitor covers the color space used for digital film projection 98 percent from. The measured values ​​are almost identical to the values ​​mentioned by LG. The average is within the factory settings DeltaE at 3.48. In addition, the monitor also offers an sRGB mode, which delivers an average DeltaE of 2.33. The gamma curve does not quite follow the ideal line. A is not calibrated average gamma value of 2.11 reached. 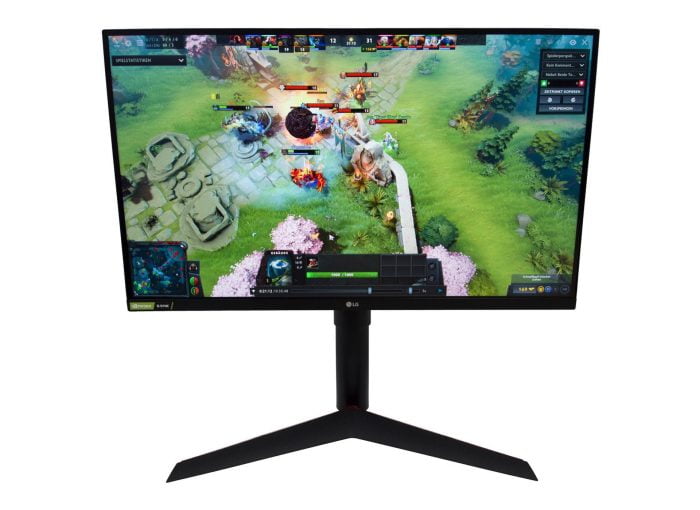 LG speaks of a "gaming revolution" and specifies the LG 27GL850-B with a response time of 1ms (GtG). For an IPS panel, this would be a fantastic value, which even TN monitors promise, but can hardly achieve in reality. In order to shorten the response time comes 3-stage overdrive (normal, fast, fast) for use. With this technique, a faster alignment of the liquid crystals is achieved by applying a higher voltage to the LCD cell. At the same time, the overdrive also increases the susceptibility to display errors, which are noticeable in the form of ghosting and streaks.

The colleagues from Techspotthat at 144 Hz refresh rate in Normal mode average 5.88ms, in mode "Fast" 4.08ms and in mode "Faster" 1.72 ms could measure. The monitor does not quite reach the promised 1ms (GtG). In Faster mode, an average occurs 72 percent overshoot on. This also visibly suffers from this. It comes to one unsightly streak effect, which makes gaming almost impossible in this mode. This mode is completely unsuitable for games like Counter-Strike, where precision is important. It looks different with the "Fast" mode. The average susceptibility to errors is reduced to 2.5 percent. Ghosting hardly ever occurs in this mode.

The native and at the same time maximum refresh rate of the LG 27GL850-B is 144Hz. In addition to the DisplayPort, 144Hz @ 1440p also via HDMI 2.0 reached. The monitor has no G-Sync hardware module installed, but supports FreeSync and is G-Sync compatible. Both users of an AMD and an NVIDIA graphics card can use Adaptive Sync. The dynamic refresh rate is limited to 48-144Hz (DP) or 48-100Hz (HDMI). 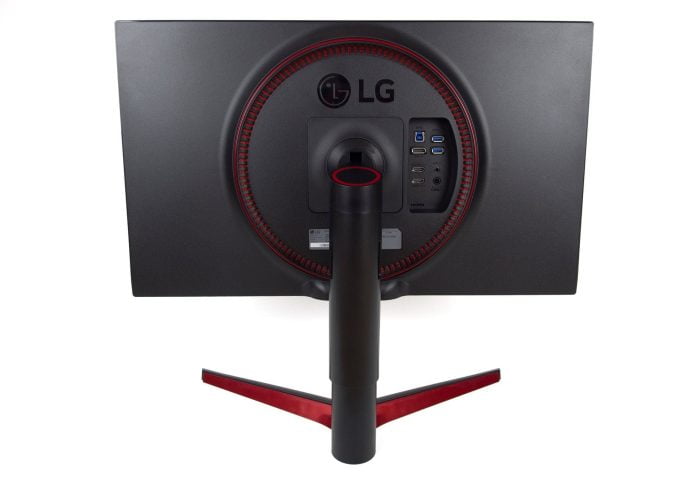 We come to the input lag, which must be strictly differentiated from the reaction time. Input lag or input delay describes the time span between input and display. In the case of the LG 27GL850-B there is no noticeable input lag.

The LG 27GL850 is an all-rounder among gaming monitors. The screen is not only interesting for gamers, but is also very suitable for office work, film and video editing and for watching films.

The Nano-IPS panel convinces with a good color space coverage ex works, a high display brightness and a wide viewing angle stability. The nano-IPS panel does not achieve the promised response time of 1ms (GtG), but with an average response time of 4ms it is currently the fastest IPS panel on the market. There are minor weaknesses in contrast, which is somewhat low with a measured contrast ratio of 732: 1.