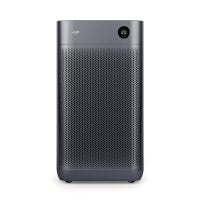 Attention allergy sufferers! The stylish Jya Fjord air purifier is available in the official Jya Store at the current offer price of 269 euros instead of 399 euros.

Anyone who imagines the Norwegian fjords is guaranteed to think of crystal clear water, pure nature and lots of clean air to breathe deeply. That's what the Jya team must have thought when they named the Jya Fjord and Fjord Pro.

The brand, which is difficult to pronounce, has very little to do with Norway. More precisely, it is a sub-brand of Smartmi, a China-based company best known for air purifiers and fans, which also produces for Xiaomi, among others.

Let's start the test. The Jya Fjord is delivered well and securely packaged. As soon as you open the box, you are greeted by the quick start guide, which you simply printed on the hinged lid. Errors during commissioning should not be able to happen in the first place. You can see the quick start guide as soon as you open it. In most cases, air purifiers are not jewels that one likes to show off. Air purifiers, often packed in bulky housings, take up a lot of space and are often an eyesore. Jya takes a slightly different approach, at least in terms of design. Aesthetics play an important role in Jya products. This is also shown by the numerous design awards that the Jya Fjord has already claimed. Bronze accents add the finishing touch to the design.

Elegance starts with the color scheme. Instead of conventional white, the color "Space Gray" was chosen, which gives the air purifier a high-quality, metallic look and goes very well with different furnishing styles.

The case of the Jya Fjord (size: 29 x 26 x 53,5 cm, weight: 6,5 kg) consists mostly of plastic. Instead of typical intake slots, a perforated housing front and back is used, through which the ambient air is sucked in. The housing is closed on the sides. This is what Jya Fjord looks like from above.

The lid or air outlet of the Jya Fjord can be removed using the side handles. This gives access to the filter inside, which can be removed quickly and easily. The lid itself is equipped with an OLED touch display on the front. Above that, the Jya Fjord can be operated at close range. The power button and the contact points for the sensors (particle sensor, gas sensor, temperature and humidity sensor) are located on the back. The lid from the back with the power button and sensors.

Hardly visible casters on the bottom make the air purifier maneuverable in the room. The rollers run pleasantly clean and omnidirectional, i.e. in all directions. The 24V power input is on the back below. There is nothing wrong with the build quality of the Jya Fjord. This is where the power supply is plugged in. The power consumption is 48W.

Getting started with the Jya Fjord is completely straightforward. Place the air purifier 20 cm away from other objects. Plug in, press the power button on the back and the air purifier starts.

The OLED display keeps an eye on the PM 2,5, TVOC and PM 10 values, which are displayed in automatic alternation. The colors green, yellow, orange and red show the current air quality in relation to the individual measured values. The PM 2.5 value is also given in µg/m². Small, effective and in colour! The Jya Fjord's touch display.

The display of the Jya Fjord can be operated with a swipe gesture. This works precisely and quickly. With a swipe to the right we get to the selection of the four air cleaning modes. You can choose between the modes "Sleep", "Automatic", "Health" and "Turbo" .

Another swipe and we get an overview of the remaining lifetime of the filter in percent. We can also reset the status of the filter there.

Other setting options that we can make via the OLED touch display include WLAN (reset), the display brightness and the UV filter, which can be switched on and off. If we swipe all the way to the left, the Jya Fjord shows the current room temperature and humidity.

It is also possible to operate the Jya Fjord remotely. For this we have to download the "Smartmi Link App" via Google Play (Link) or the Apple AppStore (Link) download.

Android device users need to create a Smartmi Link account to set up the app. iOS device users can also set up Jya Fjord as a guest.

The connection between the app and the air purifier is established via WLAN (2,4 GHz 802.11 b/g/n). To do this, the home WiFi access data must be shared with the app so that the Jya Fjord connects to the WiFi.

In contrast to pure OLED operation, the app offers a number of advantages. These include a timer, with which the air purifier can be switched on and off according to a schedule, a child lock that locks the touch display and an option to deactivate the key tone, because the air purifier emits a signal tone with every action by default.

Otherwise, the app offers all the functions and setting options that are also available via the touch display.

The "Manual" mode, which probably fell victim to a translation error and should actually be called "Manual", is practical. We can use this to determine the cleaning performance based on the room area in m². Room areas from 2 m² to 54 m² can be selected steplessly.

The room air quality is displayed in color and in the rating scales "Very good", "Good", "Medium" and "Poor".

A history is also generated for TVOC and PM 2.5 that filters the measurement data by day, week and month. Strangely there is no history view for PM 10.

When filtering the air, the Jya Fjord uses a 4-filter system, whereas the Jya Fjord Pro filters or cleans the air in 3 stages. Both models use a coarse HEPA filter in the first place, which stops large particles such as dust and pollen. On the second stage is a "NanoGuard" filter that stops particles down to 0,1 µm. Odors and gases are eliminated by an activated carbon filter. The fourth filter of the Jya Fjord is the UV filter, to which we have dedicated a separate section below. 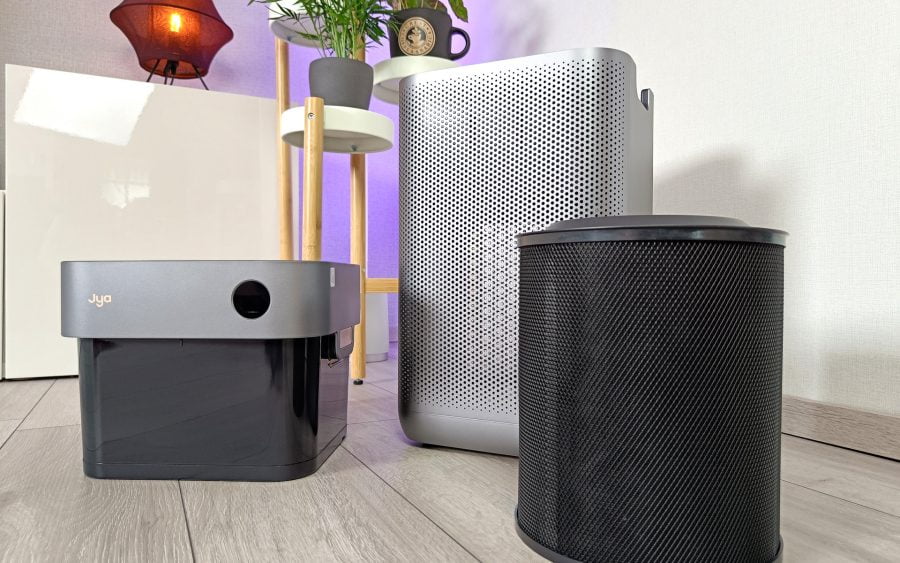 Remove the lid and simply remove the filter.

The lifespan of a filter starts at 300 days. The remaining service life of the filter is displayed via the touch display or the app. After three weeks of daily operation and mostly very good air quality, the Jya Fjord recommends that we change the filter in 283 days. It can therefore be assumed that the filter can also last longer than 300 days, but a shorter service life is also possible if the air quality is poor. Replacement filters are available from the official Jya shop for 59 euros (Link) Is available. The filter appears to be of very high quality.

A comprehensive sensor system, consisting of a particle sensor, a gas sensor and a temperature or humidity sensor, constantly monitors the air quality.

Depending on the cleaning level, the volume ranges between 18,8 dB(A) in sleep mode and up to 66 dB(A) at the highest level. In sleep mode or on a low level, the volume is so low that you only hear a very quiet buzzing, which disappears completely after a short time. Sleeping while the device is running is therefore possible without any problems. This is what it looks like from above without the lid.

In the test, the Jya Fjord was operated in automatic mode most of the time. Based on the measurement data, the Jya Fjord (Pro) automatically decides when the cleaning performance needs to be increased. If it can be understood without a test laboratory, it works reliably.

With the window open, the proportion of fine dust in the room displayed increased and the Jya Fjord increased the output. Same picture when cooking. Here the TVOC increased, which in turn increased the performance of the air purifier. The main difference between the Jya Fjord and the Jya Fjord Pro is the UV sterilization, which also removes 99,95% of viruses and bacteria from the air. Even corona viruses theoretically have no chance here! How well the Jya Fjord's UV filter works in practice cannot be understood under the test conditions here.

You can't smell anything, you can't taste anything and you can't see anything! Let's trust that the UV filter works as intended by Jya.

More information about the brand: https://eu.jyalife.com/

No guest mode for Android
App with even smaller bugs

The Jya Fjord is a jewel among air purifiers that suits almost every interior style. But the fjord also has a lot to offer technically. All important measured values ​​for PM2.5, PM10 and TVOC can be kept in view at all times via the OLED display. The Smartmi Link app is available remotely, which can be used to conveniently control the air purifier from a distance. If you prefer to use your own smart home, you can integrate the Jya Fjord into Google Home, Apple HomeKit or Amazon's Alexa.

If it can be traced without a test laboratory, the air purification with the Jya Fjord works reliably. Pollen, dust and odors as well as viruses and bacteria (UV-C light filters) can be effectively removed from rooms up to 54 m². An alternative for larger rooms up to 66 m² is the Jya Fjord Pro, which, however, does not require UV disinfection.

The special NanoGuard filter lasts around 300 days on average and can be exchanged for 59 euros at a reasonable price. In automatic mode, the Jya Fjord works pleasantly quiet. If the room air is good, the air purifier is almost imperceptible. An existing sleep mode reduces the volume to 18,8 dB(A), so that nothing stands in the way of using it in the bedroom at night.