by Timo19. March 2019
Cheap notebooks from China are currently very much in vogue. One of the better-known manufacturers is "Jumper", who has brought to the market with the EZBOOK 3 Pro jumper a high-quality, yet reasonably priced notebook. In the test lasting several weeks, I took a closer look at the notebook.
Overview
Manufacturer/Model

Jumper ECZBOOK 3 Pro is delivered in a simple cardboard box. The scope of delivery is clear and limited to the notebook, a Chinese as well as English speaking Manual, Certificate and an charger, The enclosed charger or power supply uses a NEMA-1 plug and can only be used in Germany with an adapter. 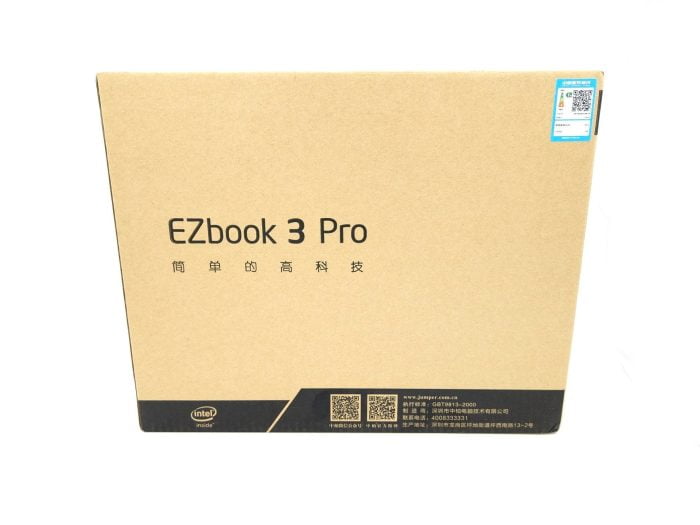 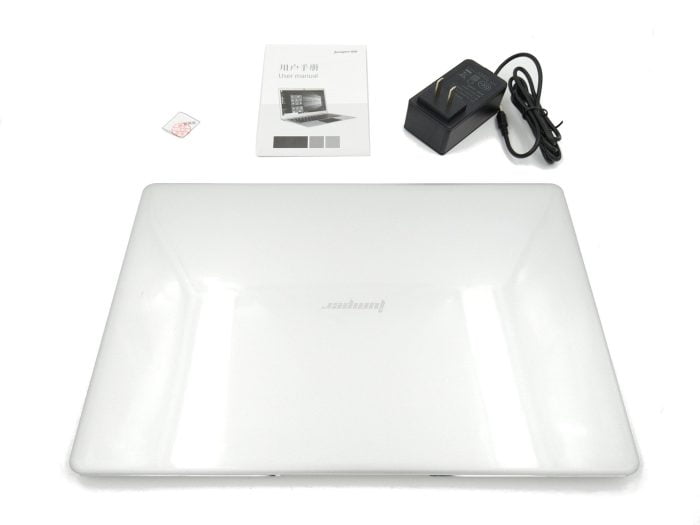 To get straight to the point: The EZBOOK 3 Pro is excellently processed. Already after unpacking I was amazed that this is a 200 € notebook. The housing is completely made Aluminium and impresses with a clean edge grinding. Even the bottom plate and the display border are made of aluminum. A secure stand is provided by four circular rubber feet on the underside of the notebook. The lateral connection possibilities amount to two Type-A USB 3.0 sockets, One Mini HDMI socket, one 3.5 mm audio jack and one Micro SD memory slot.

The size of the notebook is also surprising. With just 1.5 cm at the thickest point, the EZBOOK 3 Pro is damned slim. Visually appealing are the very narrow display edges, which are just 1 cm left and right. The weight is 1.39 kg. The only criticism of the design is the fat "Jumper" logo, which emblazoned on the back. Although the logo is only dimly visible, I would have preferred a notebook without a manufacturer's logo. 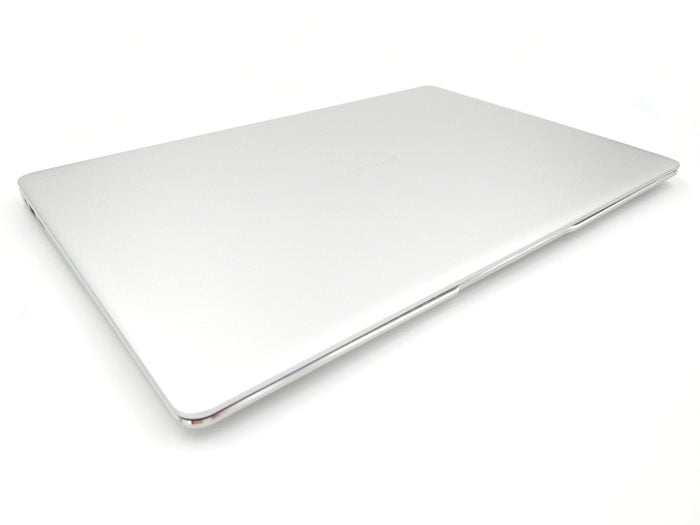 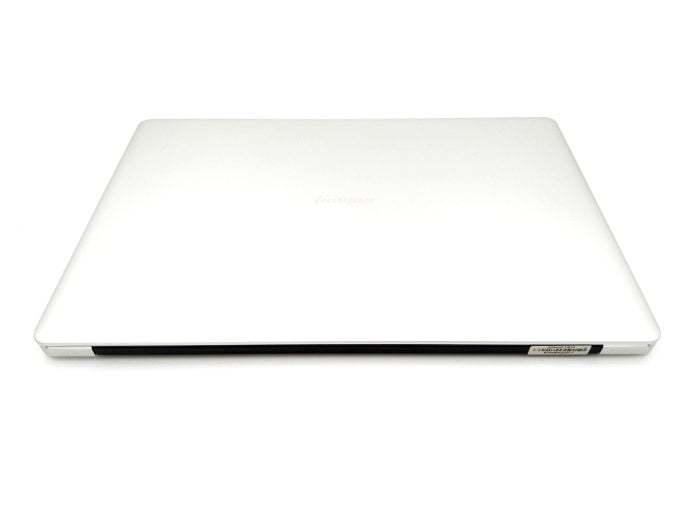 To return to the outstanding workmanship of the notebook: There is hardly anything to complain about when it comes to processing. All parts are accurately assembled, the connections are fixed and the trackpad and the keyboard leave nothing to be desired in terms of processing. What bothered me a bit is that the notebook can not be opened with one hand. For this, the hinges are set a bit too tight, while also ensuring a secure hold in the unfolded state.

The EZBOOK 3 Pro jumper uses 13.3 inches big and in FHD (1920 x 1080 pixels) resolution IPS display. Although it is a display with matt coating acts, the color brilliance and brightness yield decent. The color display Overall, it looks very natural. A big advantage of the matte display is the very good readability outdoors. Reflections, dust or fingerprints are barely visible.

Also in the test could convince the Viewing angles of the IPS panel. Even from steep viewing angles, the representation is retained. The clouding effect - that is an unclean illumination of the display - is in vain. 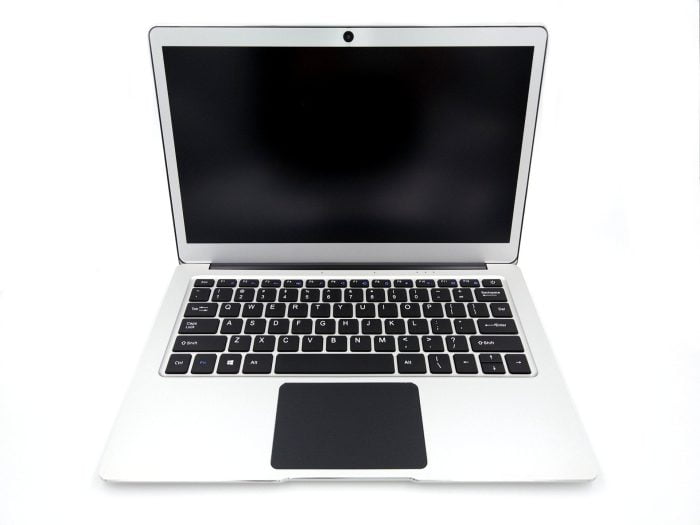 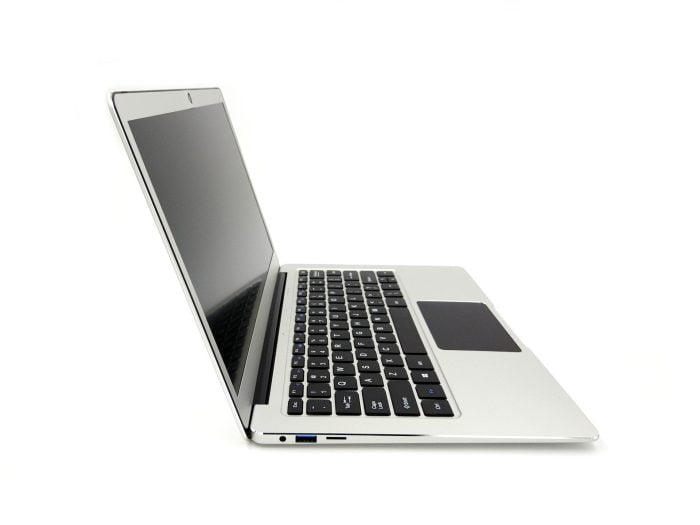 The keyboard has a English layout, Unfortunately, the notebook is only available with this layout. The keyboard in the so-called chiclet style offers a pleasant surface and a crisp pressure point with a really great typing experience. All keys are firmly seated and lie together in a comfortable distance. What the keyboard misses is a backlight of the keys.

Less convincing was the trackpad or touchpad. Although the mouse pointer follows the inputs quite precisely, left and right clicks can only be executed in the lower third of the touchpad. In addition, the pressure point is comparatively hard. Weakness shows the trackpad especially in two-finger scrolling. In the test, the touchpad usually did not react as intended and smooth scrolling was hardly possible. Other gestures do not recognize the trackpad. 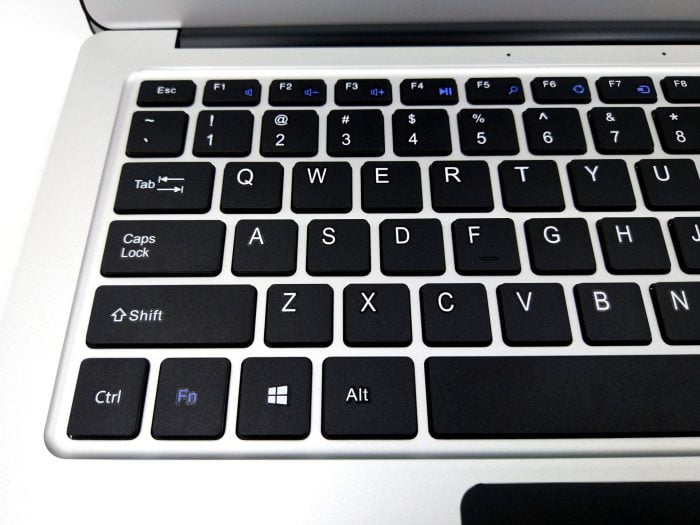 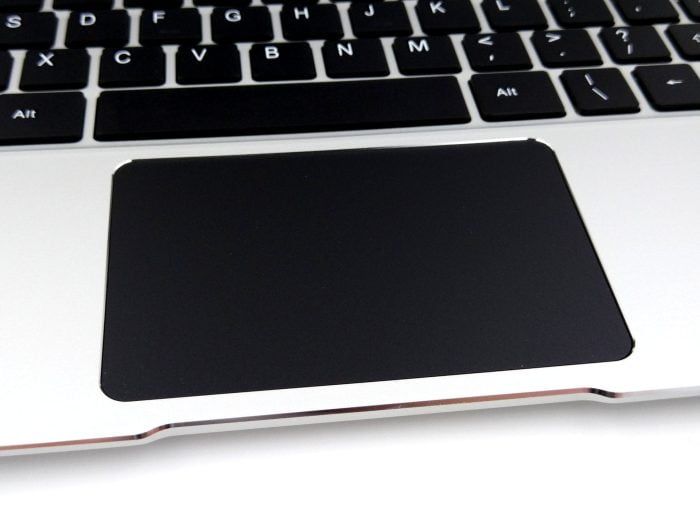 The EZBOOK 3 Pro jumper comes with a already pre-installed and activated Windows 10 Home delivered. All drivers are also already installed so that the notebook is ready to go immediately after a short boot. The operating system was spared before third-party software as far as possible. Only the "Touchpad Blocker" was preinstalled. This can be easily removed from the system. For a new installation of Windows 10, the license key is stored in the UEFI.

The basis of the EZBOOK 3 Pro forms Intel Celeron N3450which is to count to the current Apollo Lake platform. A total of 4 processor cores clock in the basic clock with 1.1 GHz and reach in the burst a clock rate of 2.2 GHz. General office work is no problem for the Intel Celeron N3450. Windows 10 runs smoothly on the notebook and there were no performance slumps when typing with Word, Web browsing and YouTube.

What the notebook is less suitable for games. This is the processor graphics Intel HD Graphics 500 just too weak. Games like CS: GO or Dota 2 are quite playable on heavily reduced graphics settings, but more demanding games are a bit of a jerk. What the Intel HD Graphics 500 is all about, is this Decode VP9 and H.265 encoded video material at the hardware level. 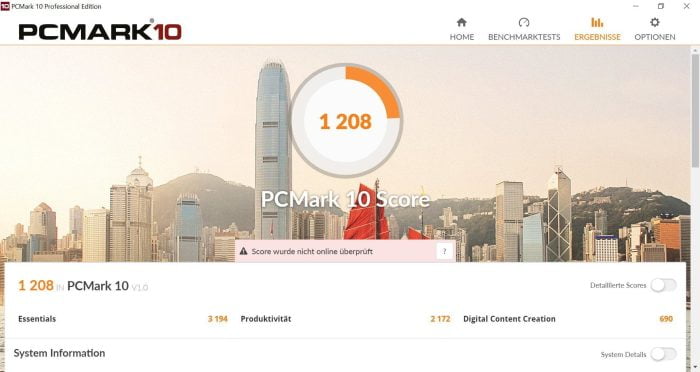 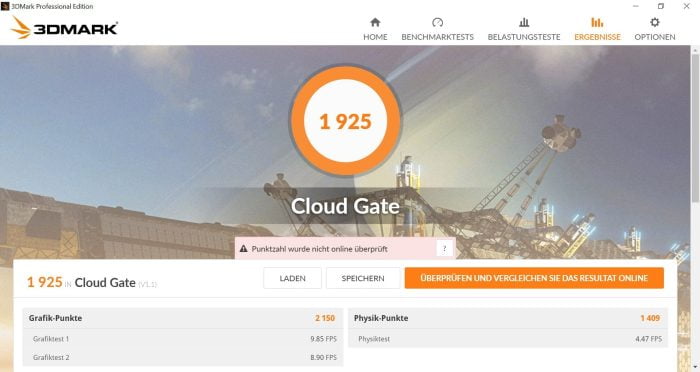 With a 6GB large memory the EZBOOK 3 Pro is perfect for multitasking. Even with simultaneous applications started, the notebook hardly sweat. The internal data store amounts to one 64GB large eMMC memory from Toshiba. About one M.2 slot In addition, the data memory can be extended with an M.2 SSD. The storage and connection performance is within an acceptable range. 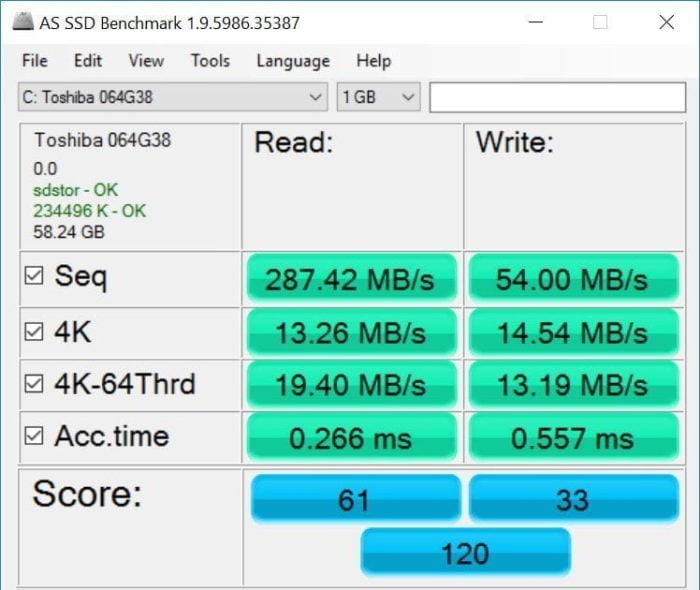 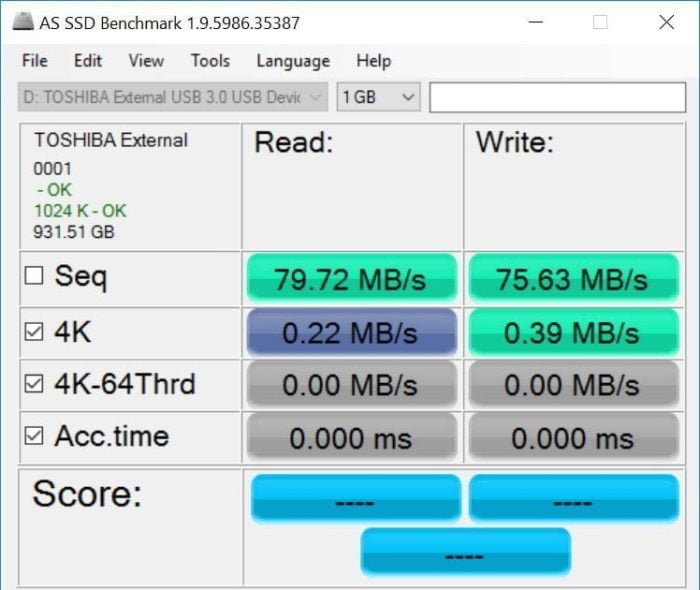 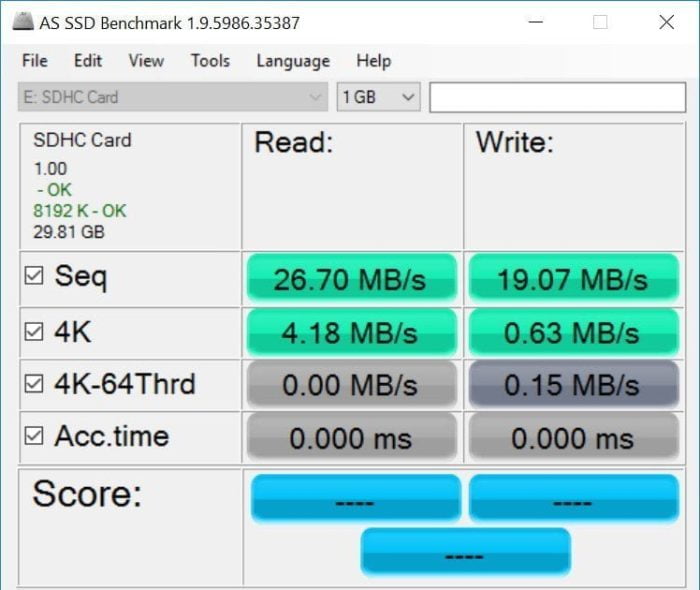 The passive cooling performance of the notebook is good. The core temperature reached below Full load maximum 72 ° C, Even at the outside of the case, the notebook was never so warm that you could not touch it anymore. Unlike many other China notebooks or ultrabooks, the EZBOOK 3 Pro jumper has full control over heat dissipation and no automatic throttling of processor performance.

You do not have to say a lot about the camera. The 2 megapixel front camera fulfills its purpose and is just as suitable for video telephony. Detailed shots during the day and at night are not possible. Above the keyboard are two microphonesthat record the sound in reasonable quality. 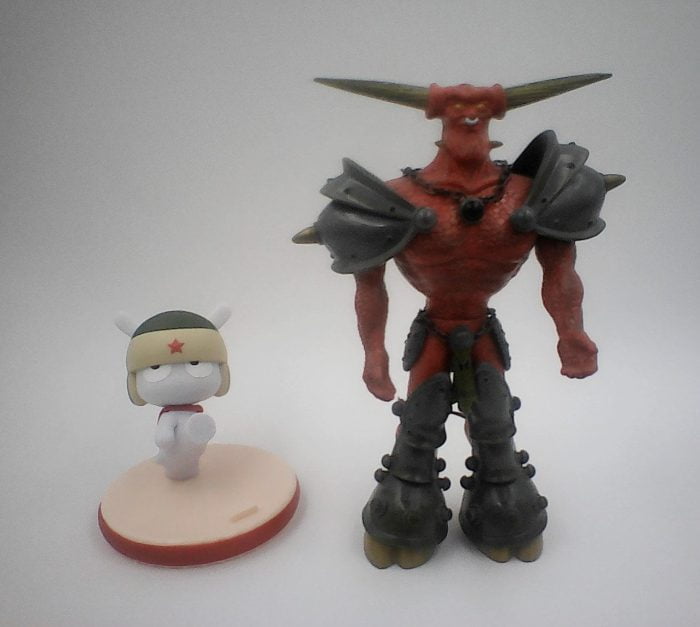 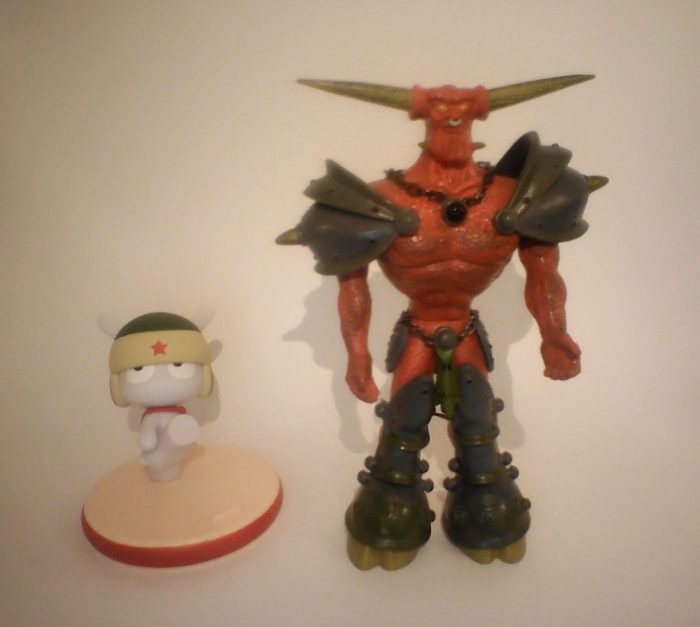 The Stereo speakers was placed on the bottom of the EZBOOK 3 Pro. The audio controller is of the type Realtek ALC269, A sound miracle is not to be expected. Nevertheless, the speaker reaches a high and above all distortion-free volume and is suitable for occasional listening to music or watching movies. The playback quality over the 3.5 mm headphone jack is not objectionable and delivers a good sound overall. 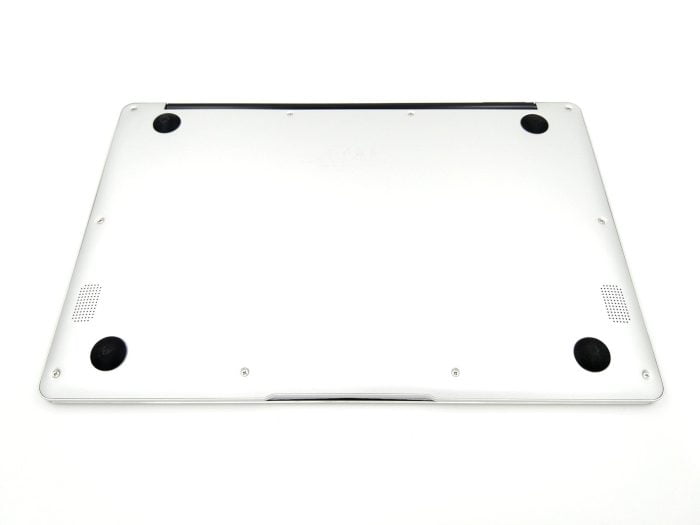 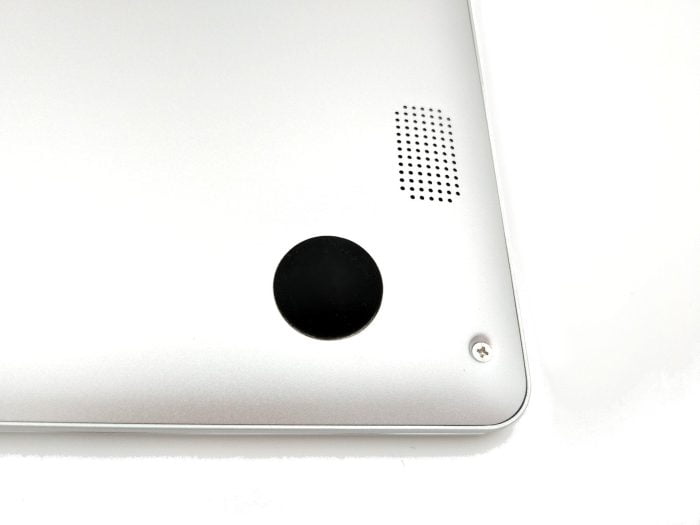 For a connection to the WLAN has our test copy of the EZBOOK 3 Pro one Realtek RTL87238 Wireless Adapter, The are supported WiFi protocols 802.11b / g / n, Recently, there is also an upgrade model of the notebook that supports Dual Band AC WiFi. Also available is a Bluetooth 4.0 module, The transmission in the WLAN and via Bluetooth was consistently stable in the test. The data rates correspond to those of the single-band WiFi and also the achieved transmission range is not to be criticized. 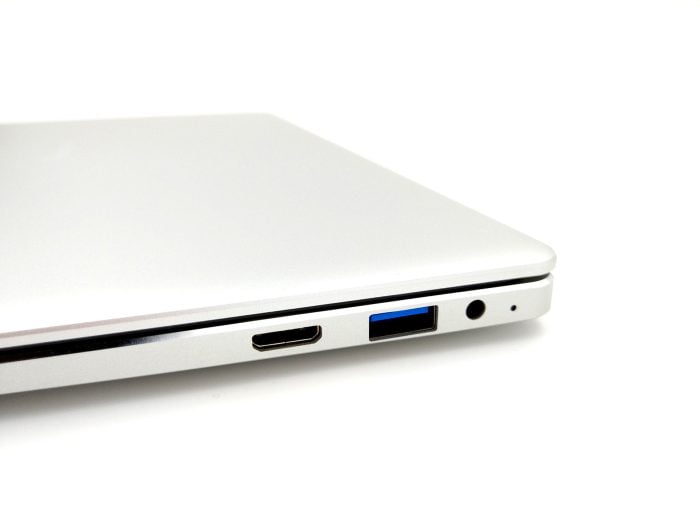 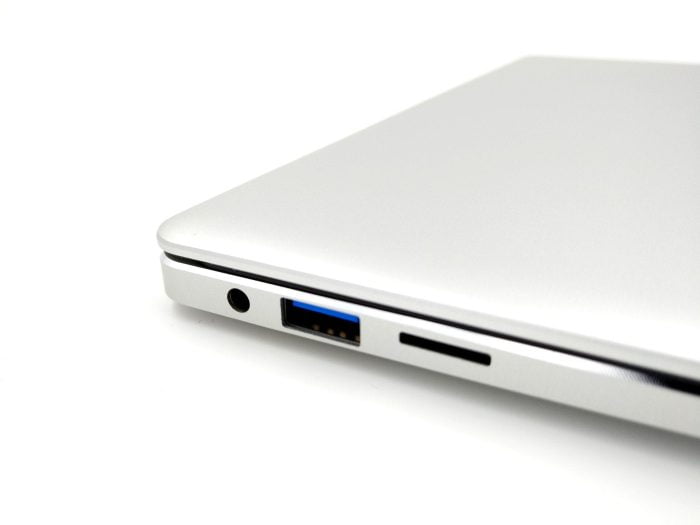 The Capacity of the battery gives jumpers 9600 mAh at. The average duration was at medium brightness and conventional usage at about 7 hours, If the brightness is reduced to a minimum, 8 ½ hours runtime is possible. Some games and YouTube tugs on the battery, which is why intensive use of the battery already after 4 hours had to be charged. The load time was 2 hours and 45 minutes tested.

For about 230 €, the EZBOOK 3 Pro jumper is an exceptionally well-made notebook in an aluminum unibody that outshines even much more expensive devices. Also on the hardware side, the notebook is well equipped and is - especially because of the very good keyboard - for all Office work. Of course, the EZBOOK 3 is not perfect either. Mainly to criticize is the poorly implemented trackpad.

I like. Now with Dual Band WLAN. Got it ordered directly to me !! Incidentally, the M.2 slot also has the new model :).

Good evening! First of all many thanks for this very good report. I loveeugle now for several weeks with this notebook. On the Internet you read different opinions and also from different revisions. Can you tell me which version you have tested? I wanted to order this notebook from Gearbest. What do I have to pay attention to and which version is currently being sent there?

I am very pleased. The price-performance ratio is great. Runs fluently. Great for me.

I also ordered from Gearbest and arrived a little late after 21 days. I am very excited about the notebook, very nice, high quality design, slim and lightweight and a great DIsplay. The Tastur is a bit uneconomical and the touchpad is lame, but otherwise absolutely outstanding for the price. Unfortunately, my jumper crashed after 4 weeks of use when watching movies and now no longer drives up. Returning is almost impossible, since the cost is about 200 EUuro, the German Post does not accept batteries and therefore only other senders come into question. The topic crash at the jumpers I read again and again in forums and apparently there are often problems with the Windows 10. Too bad to have the actually nice notebook ...

Hi, you could contact GearBest support. Recently, repairs are also accepted at a repair facility based in Spain. Just write and ask :).

Hello, I have had the device for about 5 months, use it for surfing and watching videos and occasional office. For this application, the processor is absolutely sufficient. The device is absolutely valuable for this price range, I have bought at Amazon keyboard stickers that solve the layout problem super easy and fast. The only major shortcoming for me is the battery: this holds at 25% brightness and surf with 7-8 tabs in Firefox only 3 hours. This is very disappointing for me. Is there similar experience here? What can this be? Can a new Windows reinstallation help?