Home » Reviews » other » Gadgets » Jackery Giant Plus Review of the Powerbank

Jackery Giant Plus Review of the Powerbank

by Timo19. January
If you travel a lot or like to travel for long periods of time, you will often be limited to the smartphones Batteries After a few hours of SOT (Screen On Time) most smartphones will run out and if there is no power source nearby, you will quickly put into an awkward position. A power bank is probably the best way to charge a battery while on the go.
The Jackery Giant Plus Power Bank in Review

The Jackery Giant Plus Powerbank was delivered in a nice cardboard box. In addition to the orange power bank, the package included a USB charging cable in black, an operating manual in English, a warranty card and a thank you note card.

The Jackery Giant Plus Power Bank measures 11cm x 8cm x 2.1cm and thus has a rather above-average size, which makes the power bank still fits well in a bag, but with a host bag it can already cause problems. Regarding the weight, the power bank comes on 295g. The case has a striking, orange color and is made of brushed aluminum, with the top and bottom made of white hard plastic. The powerbank has a power button, a USB port with 5V and 2.1A, another USB port with 5V and 1A, a micro USB port to charge the Giant Plus and two small LEDs that can be used as a flashlight. On the side there is also a blue charging indicator (3 charging bars), which shows the current battery level of the power bank. 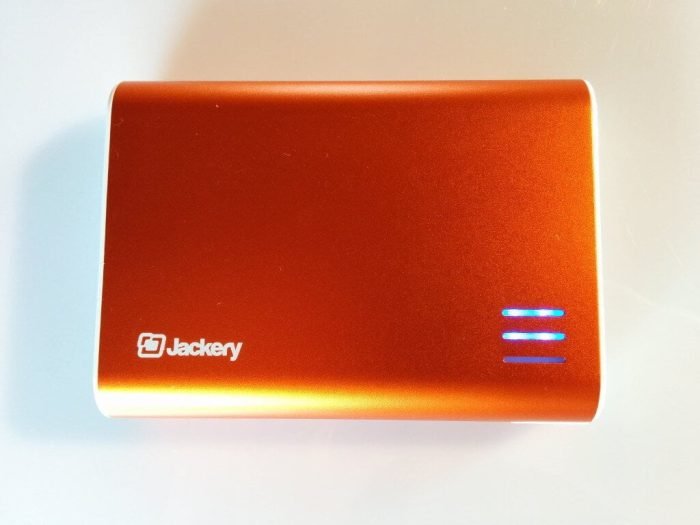 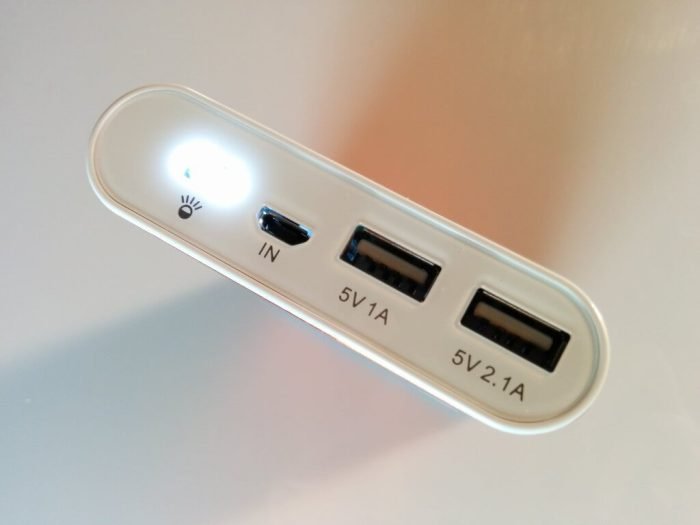 The flashlight can be switched on and off again by pressing the power button twice. The LED used here is not the brightest in terms of luminosity, but is sufficient to illuminate something in the dark.

As a nice feature, there is also a Jackery App, which is also referred to the Thanksgiving card. However, this app is only available for iOS and is just a battery management app for the smartphone. The app has nothing to do with the actual power bank.

The Jackery Giant Plus Power Bank is very well made and visually I find the orange design extremely appealing. Although the Giant Plus is not quite as portable as the smaller model with 9000mAh, but the Giant + comes on whole 12000mAh, making it ideal for longer trips, where you do not have a power source every day. I myself will use the power bank for festivals where a charge of the Jackery Giant Plus will surely power my smartphone for 3 days. Thanks to the high output current of 2.1A, I was able to fully charge my Nexus 5 within an hour. Overall, I was able to fully charge my Nexus 5 (2300mAh) with the 4x powerbank. Charging time to fully charge the power bank is about 6 hours.

The flashlight is a nice additional feature and certainly useful for emergencies. Which batteries were installed in the Giant Plus is not known to me. One can assume, however, that Jackery has also used in the Giant Plus high-quality batteries. The model with 9000mAh has Panasonic batteries, for example.

Especially in comparison to cheaper power banks I noticed that the jackery power bank when charging a device does not develop any self-heat and when charging the power bank itself is also hardly warm. All in all, the Jackery Powerbank lived up to my expectations and I can recommend them without any problems.